From historic boutique houses to secluded oases: The world’s first book about hotels in Iran reveals the country’s charming, beautiful and welcoming places to stay

The world’s first guide to hotels in Iran is out next month. And anyone who’s dubious about its contents, that it can’t surely showcase anything enticing, is in for a surprise.

Persian Nights – Amazing Boutique Hotels & Guesthouses in Iran, published by teNeues (www.teneues.com), is authored by Thomas Wegmann, who travelled from the top to the toe of the country and left it with his preconceptions about the hospitality there shattered.

‘I didn’t think that Iran had so many charming boutique hotels with beautiful rooms, great service and excellent cuisine,’ Wegmann, 46, told MailOnline Travel. ‘And that’s exactly why I wanted to create Persian Nights, the world’s first book about hotels in Iran.’ 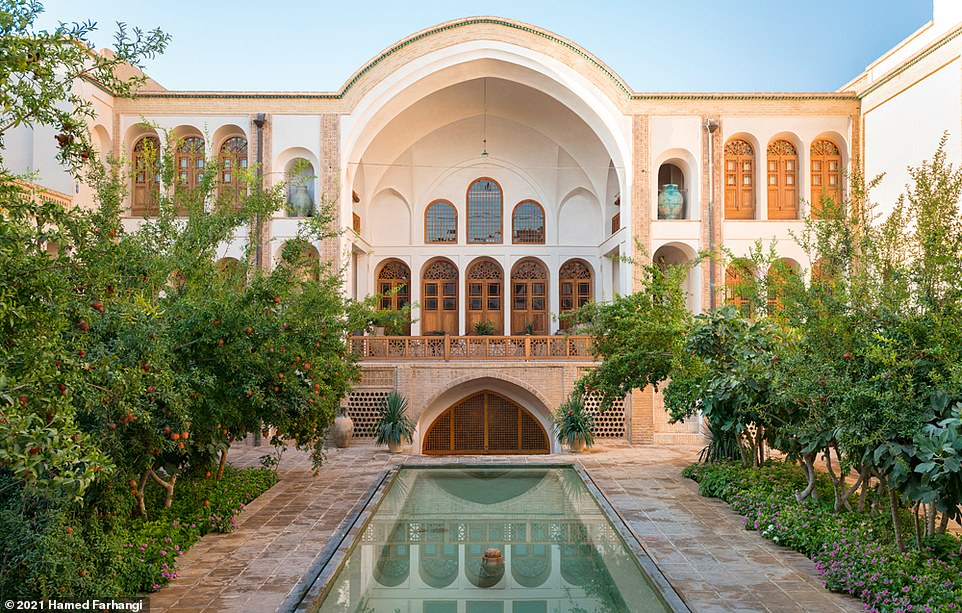 The 20-room Manouchehri House (pictured) is located in the city of Kashan, two-and-a-half-hours’ drive from Tehran. According to Wegmann, Kashan was the former centre of Iranian textile arts. This hotel doffs its cap to this heritage by featuring its own weaving workshop, where it carries out master-apprentice textile weaving education. Other hotel facilities include two restaurants, a gift shop and a cinema that was created by converting a cistern 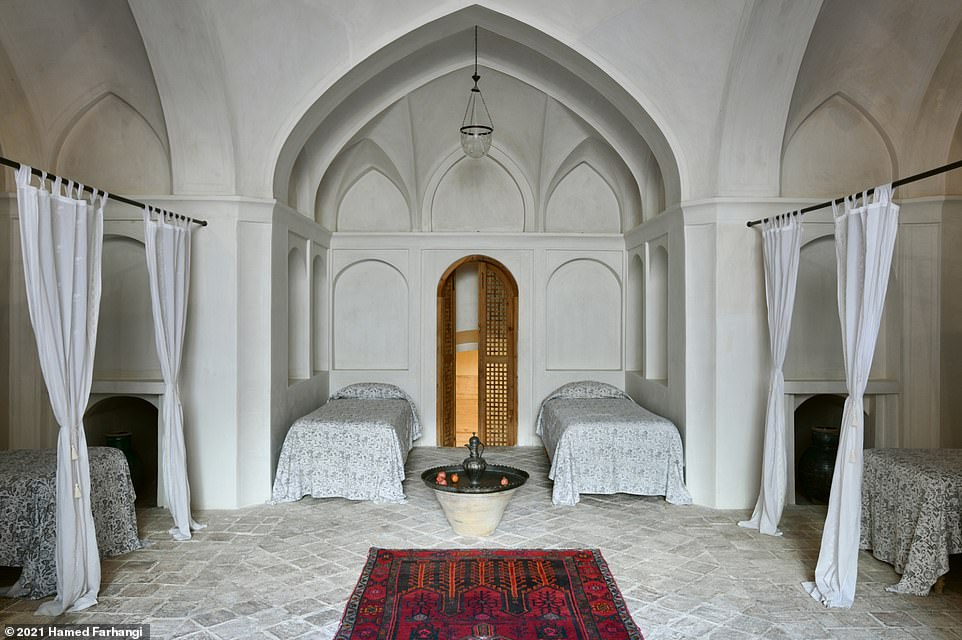 This high-ceiling room is the largest of 20 available at Manouchehri House. It sleeps up to six people and is decorated with antique Iranian furnishings and intricate carpets. Wegmann writes: ‘Hidden away by its exterior walls, the hotel has a real sense of tranquility enjoyed by guests, who are often in search of this exact peace of mind’ 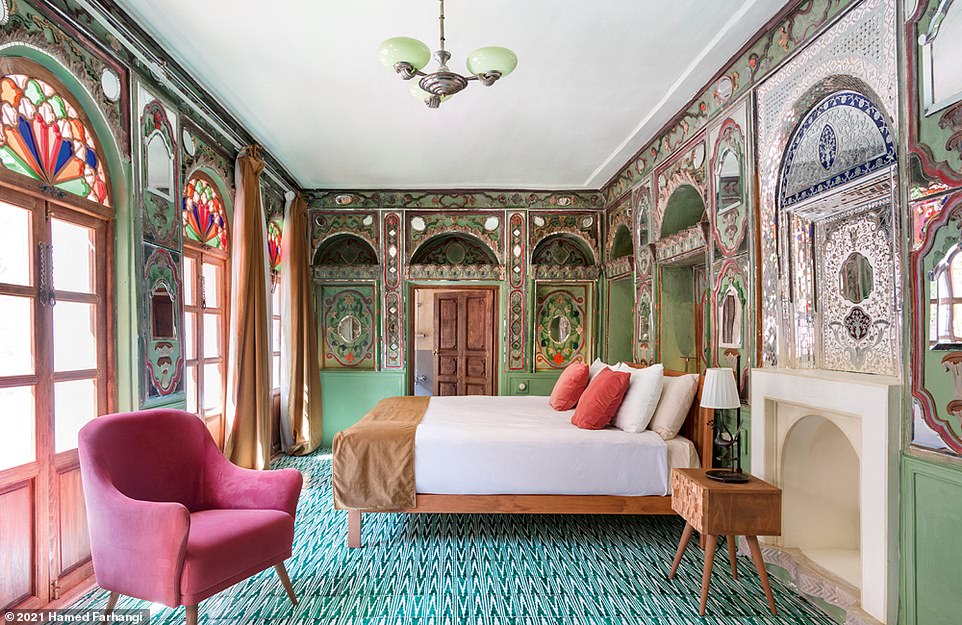 This ornate space is called The Mirror Room and it’s one of nine uniquely decorated rooms at the Darb-e Shazdeh boutique hotel in Shiraz, in south-west Iran. Wegmann says: ‘The colours of the day’s progression reflect endlessly in the many floral-relief decorated mirrors’. Equally impressive, he goes on to explain in the book, is the Owrsi Suite, which is decorated with hand-painted tiles and paintings on the ceiling

The book features images and descriptions of 16 boutique hotels and guesthouses in the country – from the capital city Tehran in the north to Qeshm Island, which is located in the Persian Gulf on the southern tip.

According to Wegmann, who’s from Switzerland, one thing unites all the places in the book – hospitality. He said: ‘I was surprised by the warmth and openness that I encountered all over the country as a traveller. During every stage of my journey, I felt immediately welcomed and valued as a conversational partner, without ever feeling pressured in any way.’

The accommodation in the book comes in all shapes and sizes. There are hotels like the Joybar, which was built out of the ruins of a structure from the Qajar Dynasty, which ruled Iran from 1789 to 1925. 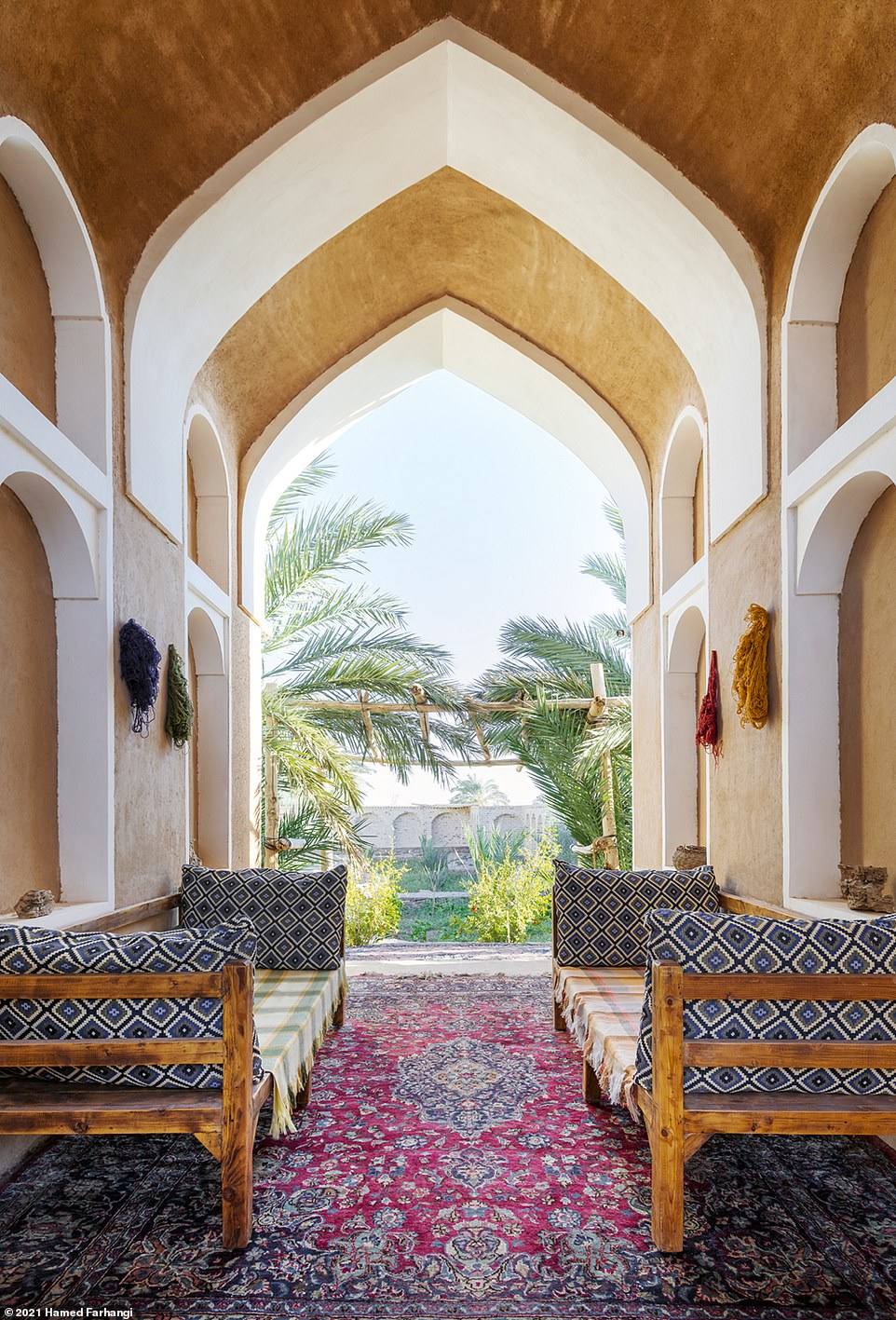 Pictured here is the Ateshooni guesthouse in the desert village of Garmeh, an oasis that Wegmann reached ‘after hours of driving through the dusty, monochrome desert landscape’. He explains that the name of the hotel, which can accommodate 20 people, translates to a nocturnal gathering by the fire in the ancient dialect, adding: ‘Ateshooni presents its guests with the gift of quiet tranquility under a night sky laden with millions of stars… a destination for curious visitors who yearn for a bare yet striking experience in the Iranian desert’ 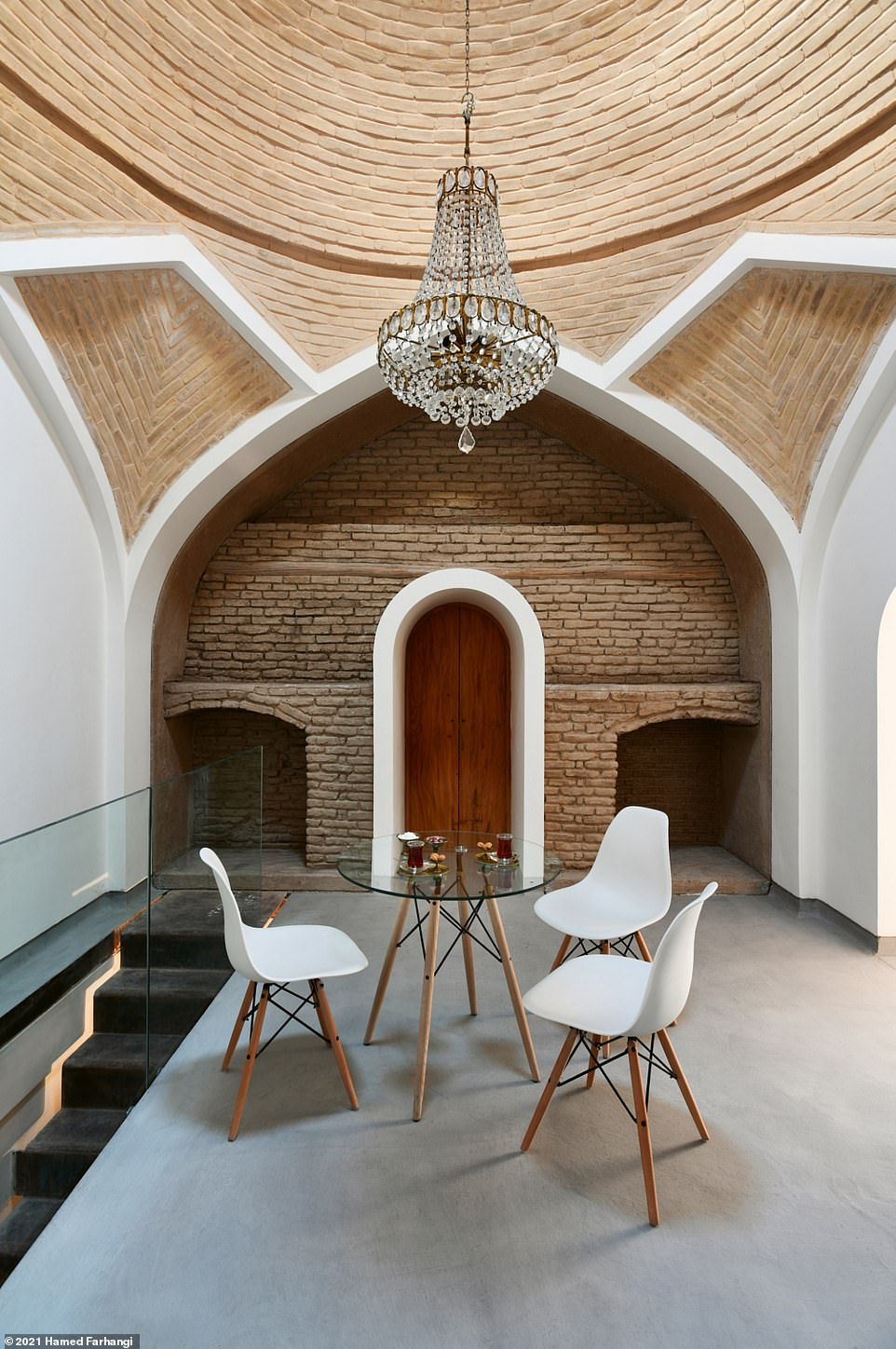 In Persian Nights Wegmann explains how the Joybar boutique hotel (pictured) in the city of Esfahan in central Iran ‘rose from the run-down remnants of a residence from the late Qajar Dynasty’. He goes on to say: ‘Joybar Boutique Hotel was a passion project of the young architect Tahereh Mokhtarpour and her partner, Manouchehr Peyvand Heydari, both of whom moved to Esfahan to realise the renovation and consequent boutique hotel project’ 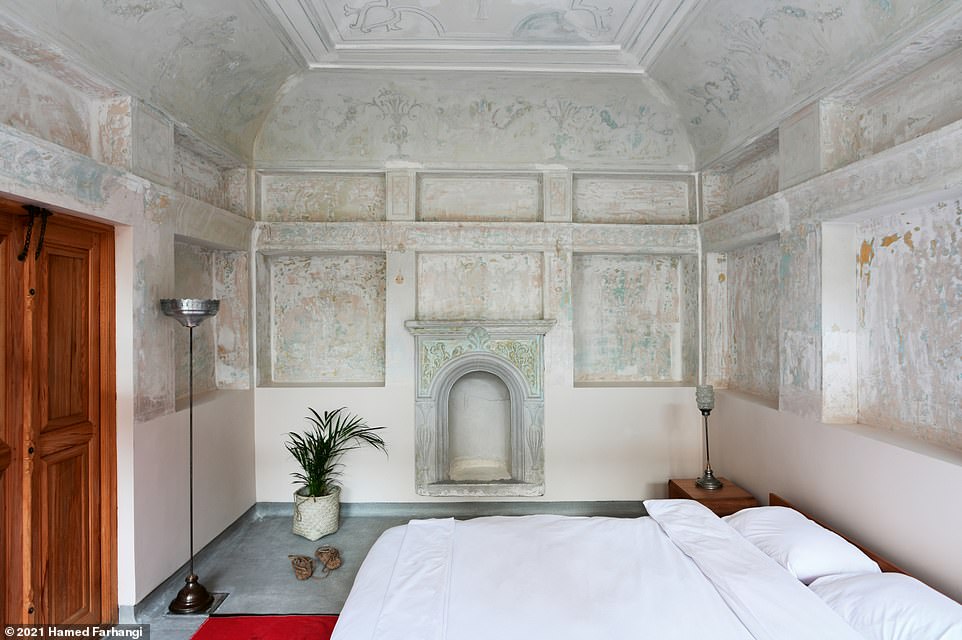 This snap showcases one of the seven guest rooms at the Joybar boutique hotel. Wegmann writes: ‘Purist interior design allows for rescued historic elements, like ceiling murals and fireplaces, to really stand out.’ Shortly after guests wake up in this room, they can enjoy what Wegmann describes as a ‘healthy Iranian breakfast of local and homemade dishes, and, upon order, a shot of espresso’

There’s an art hotel where guests can peruse an art gallery before heading to bed. Then there are places like the Maymandmoon Ecolodge, which is set inside an ancient cave.

Wegmann explained: ‘What’s most striking about many of the hotels introduced in the book is the very meticulous and simultaneously modern management of historical heritage. That’s how hotels such as Manouchehri in Kashan or Joybar in Isfahan, which were built within traditional structures, surprise their visitors with a minimalist interior design.’

In addition to showcasing the hotels of Iran, Persian Nights offers an insight into Iranian culture. The book features pages on the concept stores of Iran, Iranian poetry and the country’s growing fondness for coffee.

‘Alcohol consumption is banned in Iran,’ Wegmann explained. ‘The hotels which I visited abide by this rule. Quite frankly, I wasn’t unhappy about this alcohol-free time and enjoyed the alternatives even more.

‘Iran is known for its incredibly refreshing and delicious lemonades, for example, and in the larger cities, especially, you’ll find more and more espresso bars where the best espresso is made with Italian Marzocco machines.’ 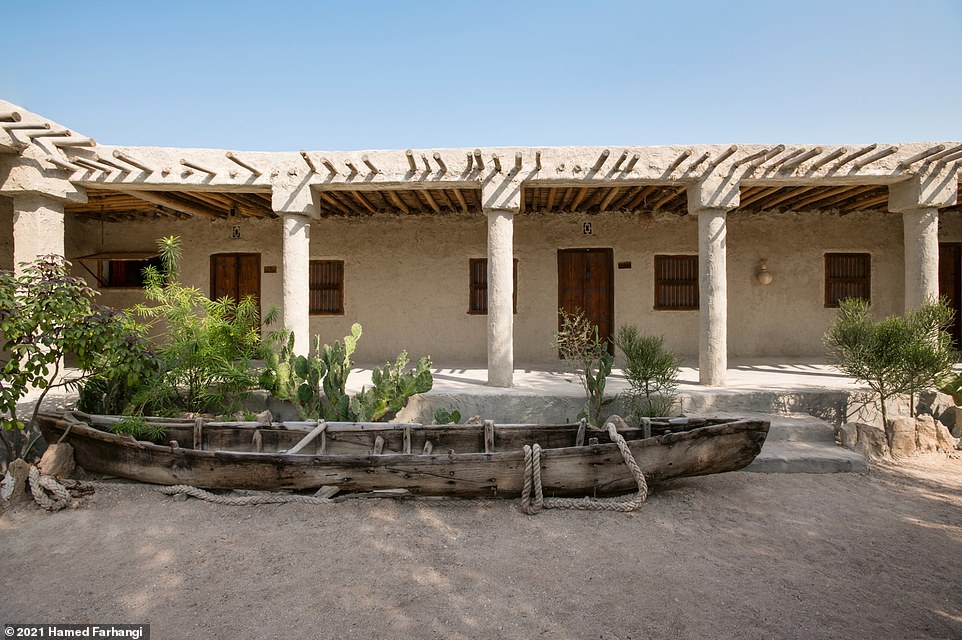 Pictured here is the Haft Rangoo guest house, located on Qeshm Island, off the south coast of Iran. According to Wegmann the rooms in this guesthouse are made from mud brick and feature traditional floor mattresses and mosquito netting. He writes: ‘Haft Rangoo is an abode for laid-back travelers who want to experience the simple lives of local islanders, a true opportunity to go back to basics, reveling in Qeshm’s unique nature and the culture of its inhabitants.’ Guests staying here can relax in the reading room, swing in hammocks, and take part in a range of water sports 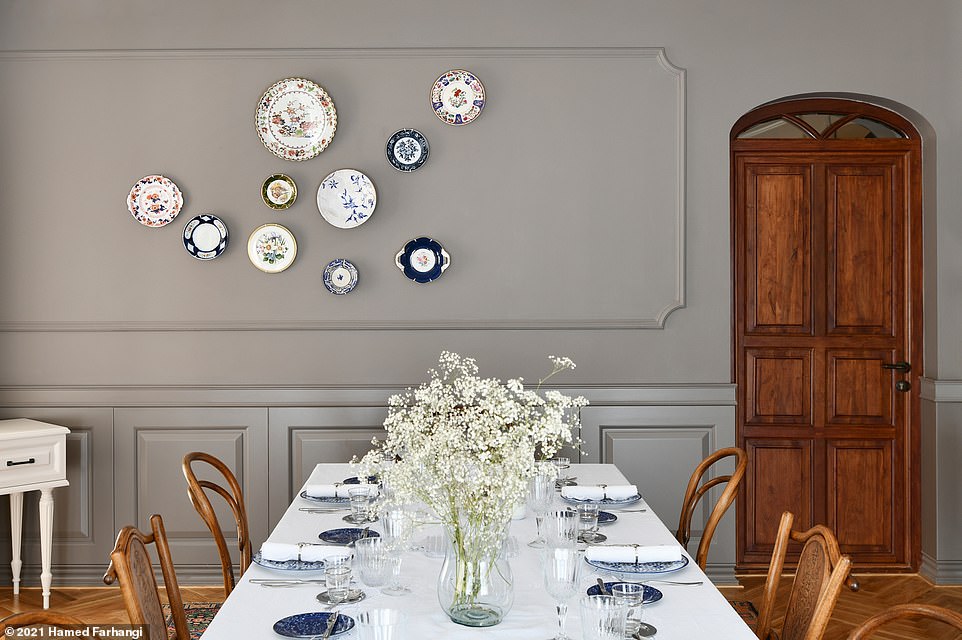 This photograph captures the breakfast table at the five-bedroom Nezamiyeh boutique hotel, a short walk from the first parliament building in Tehran. Describing the design of this hotel, Wegmann writes: ‘Every surface is pristine with antique furnishings and more modern touches creating a perfect balance. Table cloths are trimmed with delicate lace, the sconces shine in their polished crystal and glass, and the orchids take in the noontime sun on wooden windowsills’

During his time in Iran Wegmann also visited some of the country’s World Heritage Sites, like the Historic City of Yazd and the mud buildings of Bam.

However, Wegmann told MailOnline Travel that he experienced some of his favourite moments of his travels when he returned from these heritage sites.

‘I experienced some of the most beautiful moments in the evenings upon returning to my accommodation – after having visited the countless Unesco World Heritage Site,’ he said. ‘And just stretching out on one of the traditional daybeds in the charming courtyard, listening to the fountain’s gentle splashing. These were some of the most peaceful and relaxed moments one can imagine.’

According to Wegmann, peaceful evenings were soon followed up with restful nights of sleep during. He said: ‘I felt very protected and secure in all the boutique hotels and guesthouses and let the relaxed atmosphere lull me to sleep.’ 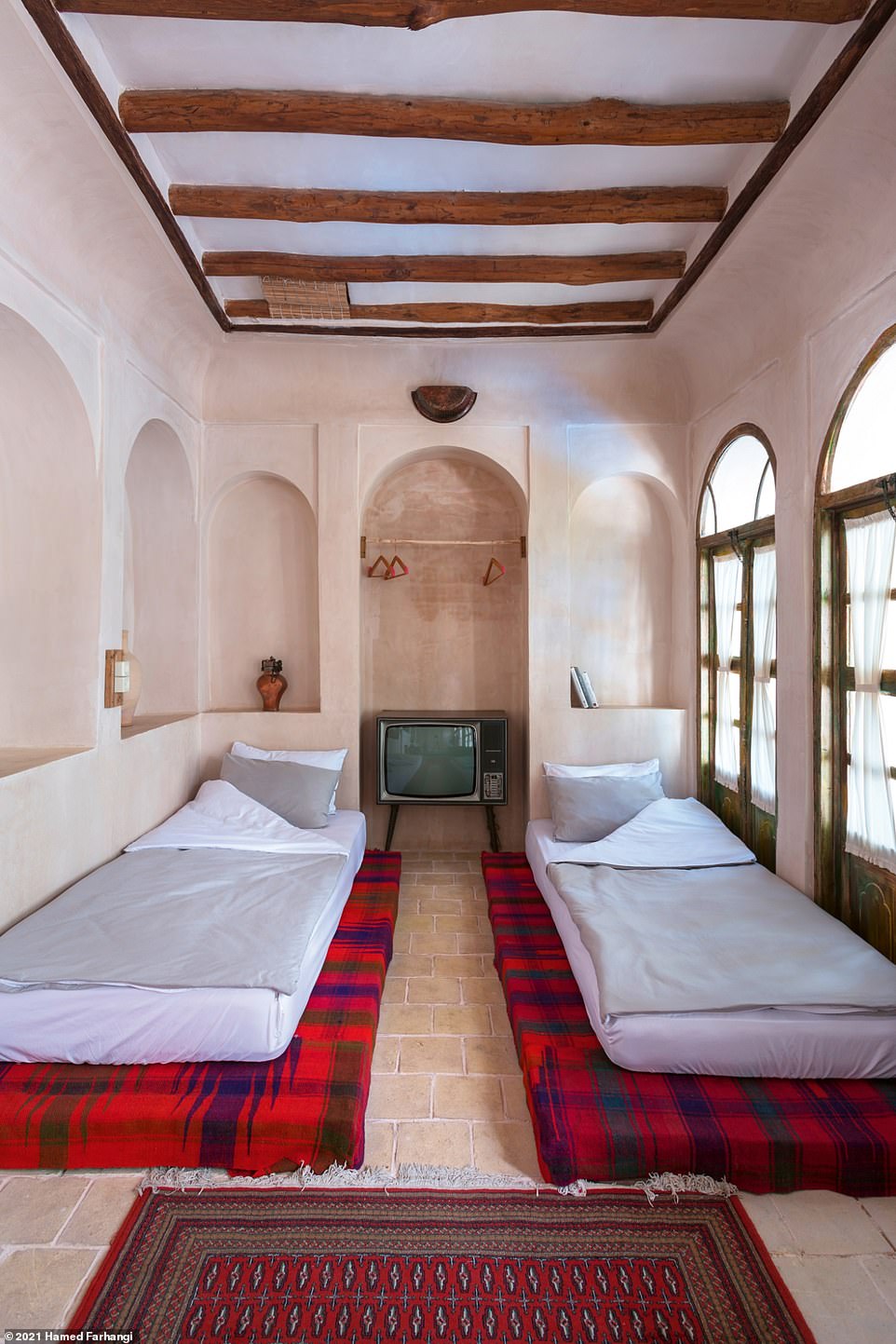 This image depicts one of the five rooms at Taak House, a 15-minute walk from the historic square of the city of Esfahan in central Iran. Featuring natural wood beams on the ceilings, traditional ceramics and handwoven carpets, the rooms look out over a courtyard filled with potted plants and what Wegmann describes as ‘the meandering branches of the carefully conserved grapevines from which the hotel takes its name’ 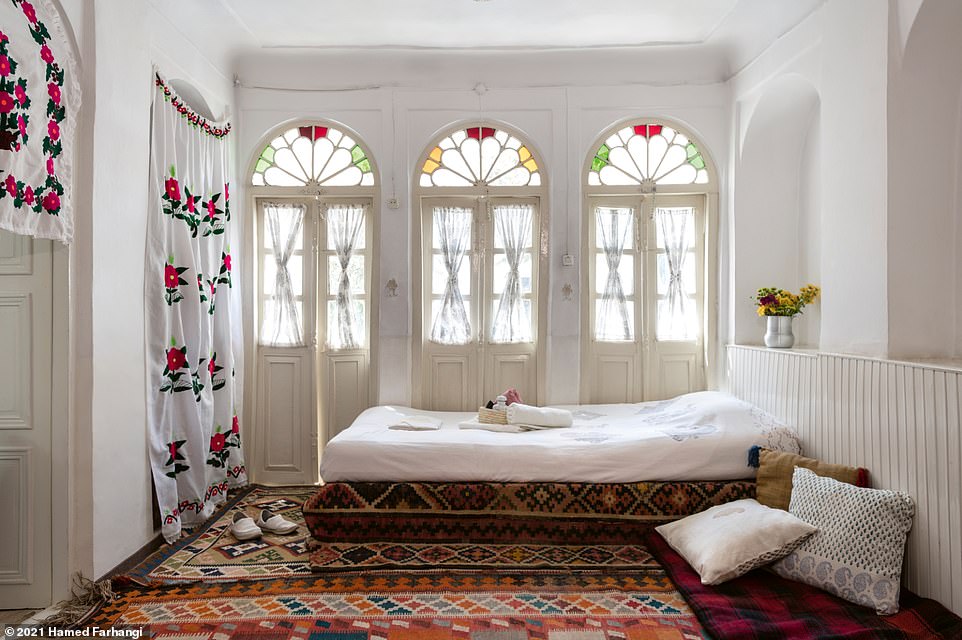 This photograph reveals how the rooms at Howzak House, near the Unesco-listed Masjed-e Jame mosque, in the city of Esfahan, look. According to Wegmann, the design of these rooms was inspired by Esfahan’s nomination as the World City of Handicraft by the World Crafts Council in 2018. He writes: ‘Each uniquely designed room is decorated with handicrafts collected from all over Iran as well as traditional Qalam-Kar (Persian woodblock printed textile) bed linens, curtains, and tablecloths

Wegmann’s fascination with Iran began as a child, when he learnt about the Persian Empire in his history lessons at school.

In the introduction to the book, he reveals: ‘For years I had harbored a definitive desire to discover this country between the Caspian Sea and the Persian Gulf, between Turkey and Pakistan.

‘This fascination only grew as an adult. He explains: ‘I was enthralled by the boundless hospitality, the deep knowledge, and the strong cultural identity, which I encountered among the Iranians that I met here in Europe.’

Wegmann plans to return to Iran as soon as the travel restrictions are lifted.

‘I’m already looking forward to my next Persian Nights experience once this pandemic subsides,’ he said. ‘When I can return and travel through this fascinating country with its welcoming hosts.’

As to where he’ll stay first, however, he’s undecided.

‘It’s difficult for me to choose a personal favourite [hotel],’ he said. ‘Because I already made a selection of hotels that appealed to me. I can say that the Hanna Boutique Hotel in Tehran, housed in a historic building from the 1930s and recently renovated with a modern interior design and its own concept store, is very special.’ 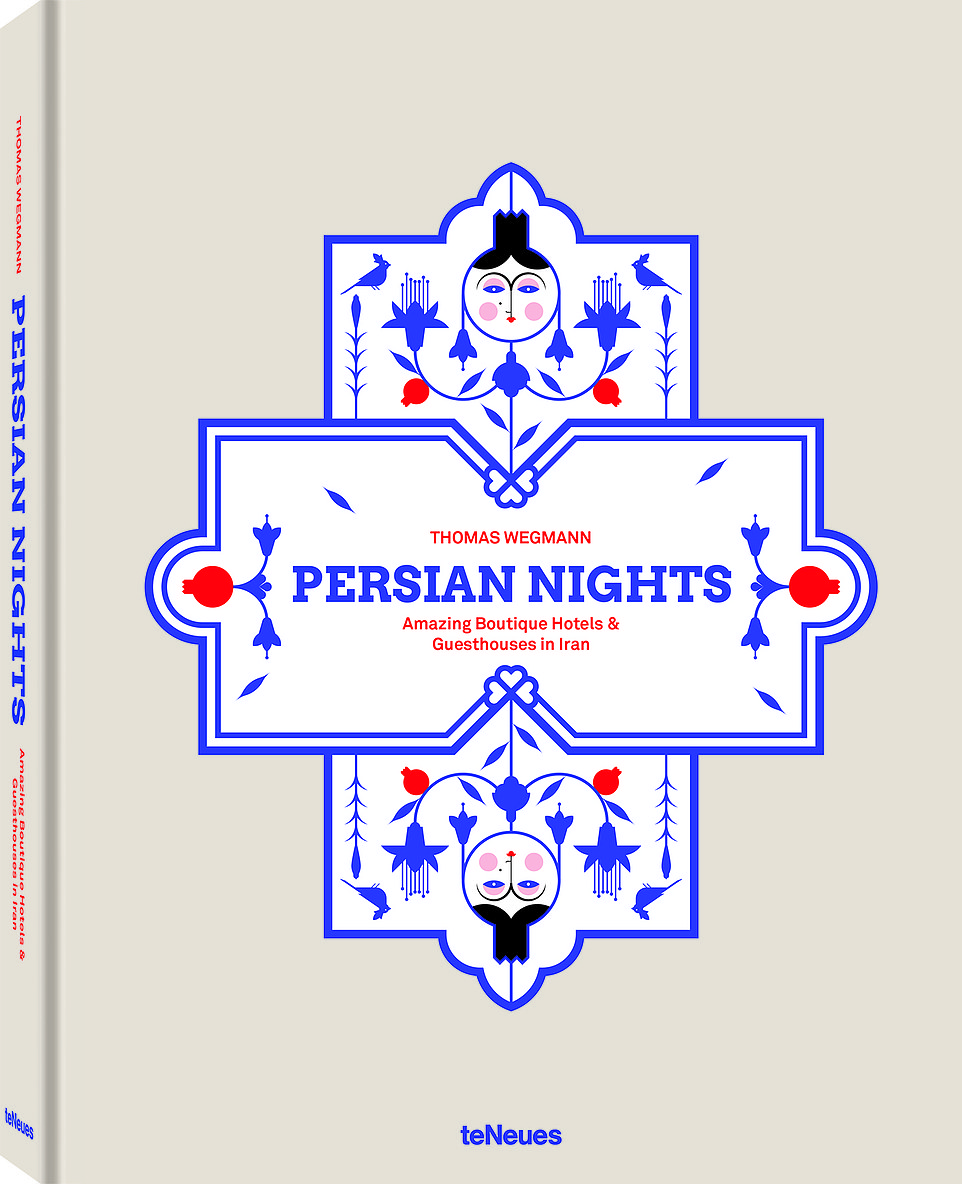