A woman was caught on video hanging off an 11th floor balcony at a hotel resort in order to capture the perfect photo.

The unnamed woman was filmed by an onlooker as she clambered over the balcony for the risky unauthorised photoshoot at Seaview Resort in Mooloolaba, Queensland in Australia.

She can be seen kneeling on the other side of the balcony while holding onto the railings as her photographer tries to capture a dramatic shot, while the man filming the incident is heard saying, “That is f***ing dumb, isn’t it?” 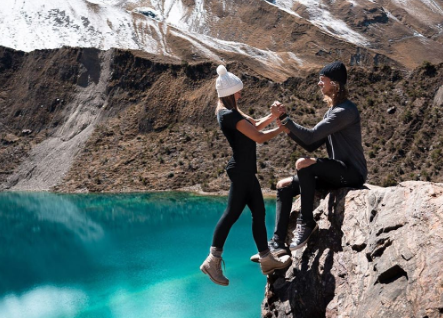 Perhaps most worryingly, the footage shows the woman’s dress blowing in the breeze, suggesting she attempted the stunt on a windy day.

“One slip and she’s gone,” the onlooker from a neighbouring hotel, identified as James, told The Courier Mail. “Next photo might have been her on the ground.”

The video finishes with the woman struggling but managing to pull herself back onto the balcony.

Local police suggested the pair could face charges if they were found due to the risky nature of their antics.

“These are people that can and should be put before a magistrate.”

It’s not the first time dangerous behaviour has attracted the attention of law enforcement.

Two men have been banned from a hotel after base jumping off the roof.

The perpetrators, believe to be guests at the Grand Hyatt Hotel in Nashville, saw in the New Year with the stunt.

The pair took the leap from the hotel’s rooftop bar, and were wearing parachutes when they jumped.

Both glided to safety in a nearby parking lot before driving away. Police were called to the scene and are reportedly still trying to locate the men.

“We vehemently condemn this kind of reckless behaviour,” the Grand Hyatt said in a statement, confirming to Fox 17 that the base jumpers had been guests at the hotel, but had since been kicked out and banned from staying again.