United Airlines passengers reacted with fury when it was revealed Biscoff cookies were being taken off its complimentary snack menu and replaced with Oreo Thins.

Travellers took to Twitter to lament the switch, with one saying they never wanted to fly with the carrier again as a result.

But the Chicago-based airline has performed a U-turn, promising the spiced caramel flavour snacks will be returning to flights. 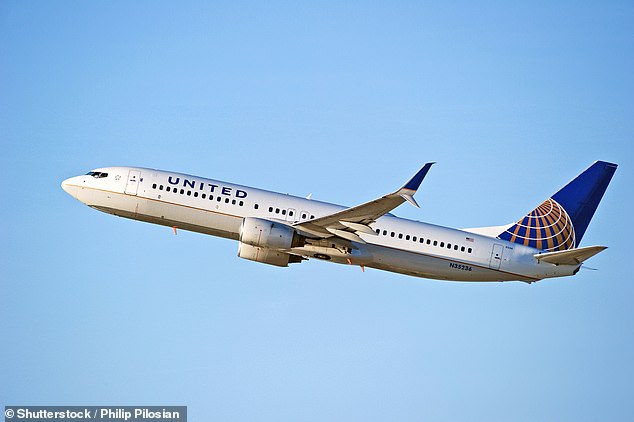 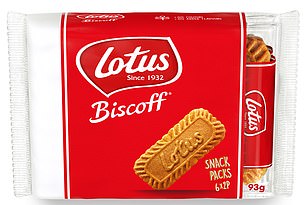 It took to Twitter to announce that Biscoff cookies will be back on the menu from May 1.

It wrote: ‘Internet, we won’t go baking your heart. We have an ongoing rotation of snacks… so here’s how the cookie crumbles for this round.

‘Oreo Thins = on board March 1. Biscoff = comes back May 1. Stroopwafel = here always.’

And after the announcement, United customers spoke of their joy on social media.

Vanessa Coria wrote on Twitter: ‘Sometimes when the internet speaks, companies listen. I truly only eat Biscoff cookies when I fly. They’re a tasty treat I look forward to while on travel! Smart backtrack @united…’

Ladyksr added: ‘Hi @united… thank you for bringing back Biscoff cookies and considering our concerns.’ 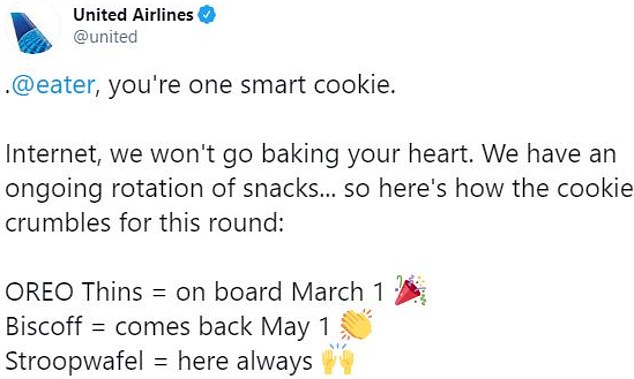 While Jacob Schaffhauser said: ‘Thank God. Thought I had to give away all my miles and start flying another airline #biscoff.’

However, it is not the first time that United Airlines has reinstated items to its menu after a social media outcry.

In 2018, it said it would be removing stroopwafels, a sweet Dutch snack, off its menu from its early morning US domestic services.

Customers reacted with fury to the news with one tweeting ‘shame on you’ at the carrier and another saying ‘you can lose my suitcases but don’t take my stroopwafel’.

After the announcement on Twitter, United customers spoke of their joy on social media

But in January 2019 they had cause to celebrate after United announced it would be making a comeback in the snack rotation.

The removal of tomato juice caused a similar furore.

Flyers lamented the loss of the fruity beverage, but just a day after the controversy, the drink was reinstated.