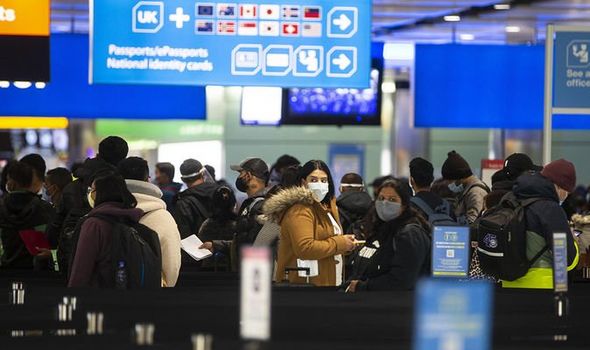 Gatwick, Heathrow, Manchester and Edinburgh airports have all reported problems with self-service passport gates. The IT issue has seen travellers stuck on planes and waiting “hours” to board flights. Heathrow airport said the issue is due to “e-gates” which are operated by Border Force.

Heathrow Airport said in a tweet: “We’re aware of a systems failure impacting the e-gates, which are staffed and operated by Border Force.

“This issue is impacting a number of ports of entry and is not an isolated issue at Heathrow. Our teams are working with Border Force to find a solution as quickly as possible.”

The delays have seen travellers take to Twitter to air their frustrations.

David Mitchell said on Twitter: “Heathrow Airport is a joke! 4 hours to get out!!!”

Twitter user Irma Grace tweeted Heathrow Airport. She said: “One and half hour wait for customs @HeathrowAirport. No assistance for those that need assistance, ME?!”

Heathrow Airport replied and said they were “aware of the issue” are working with Border Force to “find a solution as quickly as possible”.

“This issue is impacting a number of ports of entry and is not an isolated issue at Heathrow,” they added.

Sarah Rushbrooke said on Twitter: “We all appreciate that things are taking longer for all the checks – but surely this many queuing on arrival @manairport is hardly supporting Covid safety – and more arriving.”

Other users have shared photos of long queues and views from inside planes.

He tweeted: “Human logjam at Heathrow – apparently all the e gates at all the airports are down? That’s what the man just said.”

Edinburgh Airport commented on the delays, saying: “The UK Border Force (UKBF) IT issue is nationwide and UKBF teams are working to resolve this.

“All available UKBF staff are in the arrivals hall to carry out necessary checks and allow passengers to pass through the border as quickly as possible. Thank you for your patience.”

The Home Office issued a statement at 2.30pm which read: “This afternoon a technical issue affected e-gates at a number of ports.

“The issue was quickly identified and has now been resolved.

“We have been working hard to minimise disruption, and apologise to all passengers for the inconvenience caused.”

Gatwick Airport and Manchester Airport have been contacted for comment.