When a recent episode of the BBC’s Countryfile programme examined why BAME people feel the British countryside is a “white environment”, I thought back to a soggy February weekend just west of Glasgow. With Storm Jorge buffeting our car towards the mountains, myself and my husband were discussing our different upbringings while on the way to a weekend with an Asian hiking group, Boots and Beards.

He is from Lancashire and his childhood memories include camping in the countryside and family holidays in Wales and France. Mine – growing up in a Pakistani household in inner-city Birmingham – were different. The furthest I walked was to school and back. Then, in my early 20s, I took up hiking and then mountain climbing – relishing the freedom of the outdoors, the health benefits and expansion of my social horizons. However, venture out into the UK’s hills and mountains and it’s immediately obvious that diversity in our national parks is something of an issue. There is a distinct lack of people who look like me.

In the past few years, however, a number of groups have tried to address this. One is Boots and Beards, a cohort of Asian Glaswegians who regularly hit the trails and tackle Scotland’s mountains.

On a wet and wild Saturday morning we met the large group of men, two women and four children (including nine-month-old Zaakariyah strapped to his father Humza’s chest) in a hotel car park on the shores of Loch Fyne in Inveraray. Some were more enthusiastic than others at the prospect of a six-mile walk on a day forecast with torrential rain. 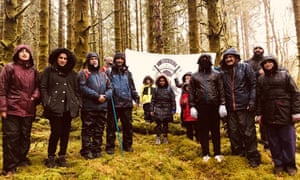 Eight-year-old Ahmad Jameel cheerily waved at some of the hotel guests who were sat in the warmth, wondering what on earth we were doing taking on the elements with our waterproofs and laminated maps. As we began our forest trek, Kash Butt explained how he co-founded Boots and Beards – almost christened Tikka-A-Walk – with his cousin, Naveed Bakhsh, four years ago after becoming severely ill. Kash’s early success in galvanising his friends and family into joining him on his health kick quickly made him realise how the initiative could make a positive and lasting impact on the wider community.

“I was working all the time and my diet was atrocious. I remember being on this Christmas night out and feeling awful,” said the father of three.

Initially Kash, a pharmacy manager, thought he had a stomach bug but was rushed into hospital and put into a sedated coma for three weeks.

“I was asleep and had no idea what was going on but my family were suffering. They saw me lying on this hospital bed, about to die. It was the worst thing for my wife and children. So, when I came through it, it was a blessing but I knew it was time to change.”

Many of the people on the walk are the sons and daughters of Pakistani migrants, all with their own reason for joining the group.

For Affrah Saleem, a single mother with five children who worked in forensics before raising her family, the walks have given her purpose again. Affrah, whose youngest child is two, came along with resolutely cheerful Ahmad, who remained at the front of the group chattering away. 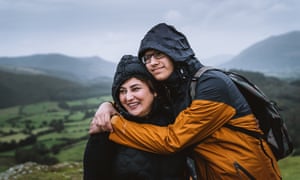 “My life has been about the kids and my family. It still is about them but I need a timeout, sometimes. Being outside, going on challenging walks, meeting new people – it has all been great, mentally, to feel like I have something which is for me,” said Affrah.

She discussed some of the health issues rooted in Scotland: the country continues to have the lowest life expectancy in the UK, as it has done since the early 1980s.

“This is not something Asian people usually do,” she said. “We are a sociable bunch but it mainly goes on in our homes with cups of tea and surrounded by food. These groups have meant that we can still eat that food but also work it off doing exercise. And the effect it has on your mental wellbeing is incalculable.”

“At first it was just men and then we started getting emails from women asking why they were being excluded,” said Naveed. “This wasn’t a deliberate thing and not something we had anticipated. We decided to start another group for women, Bonnie Boots, which still exists for women-only walks but now women can also come walking with us.”

Nafeesa Umar, 36, a fine arts graduate, was one of the women who emailed.

“I know there is a female group but I wanted to do more challenging hikes,” said Nafeesa, who works with autistic students. Her first hike with Boots and Beards was a much-coveted Scottish Munro, a mountain over 3,000 feet.

“It’s really difficult for Asian women to escape the mundanity of their lives sometimes. To get out and do something different. That’s why I’m always out with the group. I love the challenge of the more difficult walks, all the different conversations we have. That feeling that we are all in it together,” she said.

Taking shelter from the never-ending rain under some trees, we had lunch – and I discovered the secret ingredient to the group’s endless enthusiasm: Mohammed Farooq’s incredible packed lunch. There was not a soggy cheese sandwich in sight. Handmade by Mohammed’s wife, there were buttery paratha with potatoes and cauliflower, minced lamb kebab sandwiches and hot desi-style tea – all to share. Everyone dug in.

Mohammed, 61, is one of the original members of the group, which is now an award-winning registered charity with 700 members. He describeed it as a lifeline for the older generations: “I’ve been to places I would never had gone to. I’ve been in this country for years but I’d never really seen it before.”

Another older member, printer cartridge salesman Javed Akhtar, 67, added: “Our fathers’ generation spent all their time working. They were all immigrants and it had been instilled in them that they needed to work hard to provide for their families and get ahead. We had the odd day out in Blackpool but never anything like this.”

Three hours later we arrived back in the hotel lobby, soaked to the bone. A round of hot chocolates and a huddle around the fire followed.

Javed believes that not enough of Scotland’s Asian population spend enough time in the outdoors. Some of the barriers include time and their relationship with work, but also a lack of confidence and cost.

“Some people just don’t feel like it is for them – they say, ‘It’s something that white people do’ – but that whole view is really about confidence. The kind of freedom this gives you is so good, the way you feel more connected to the land, more part of this country. I love it.”

• Both Boots and Beards and Bonnie Boots are open to everyone, irrespective of race, religion or ability. The groups have had to cancel organised walks due to the pandemic but are hoping to restart in August; see bootsandbeards.co.uk for updates. Boots and Beards has partnered with Columbia Sportswear as part of its campaign with the UK national parks to celebrate the diversity of the great outdoors in the UK