From castle ruins to cable cars: The high-flying shortlisted images that wowed the judges in an aerial photography contest

Let us take you on a fantastic flight of fancy.

These are MailOnline Travel’s pick of the 50 images shortlisted in a contest called #Aerial2020 run by photo app Agora. It asked photographers around the globe to send in their best bird’s-eye shots.

In total, 9,018 photos were submitted, with the competition judges whittling them down to 50 finalists. Agora users were then asked to vote for their favourite and overall winner.

High-flying entries include a mesmerising shot of castle ruins in Austria, a jaw-dropping image of a tiny island off the coast of Spain, a beautiful Barcelona sunset snap and a vertigo-inducing picture taken from cable cars in a Chinese national park.

Octavi Royo, Agora’s CEO & co-founder, said: ‘When you see the world from above, you realise how important that point of view can be. These 50 works of art turn us into birds to admire the planet earth from above.’ 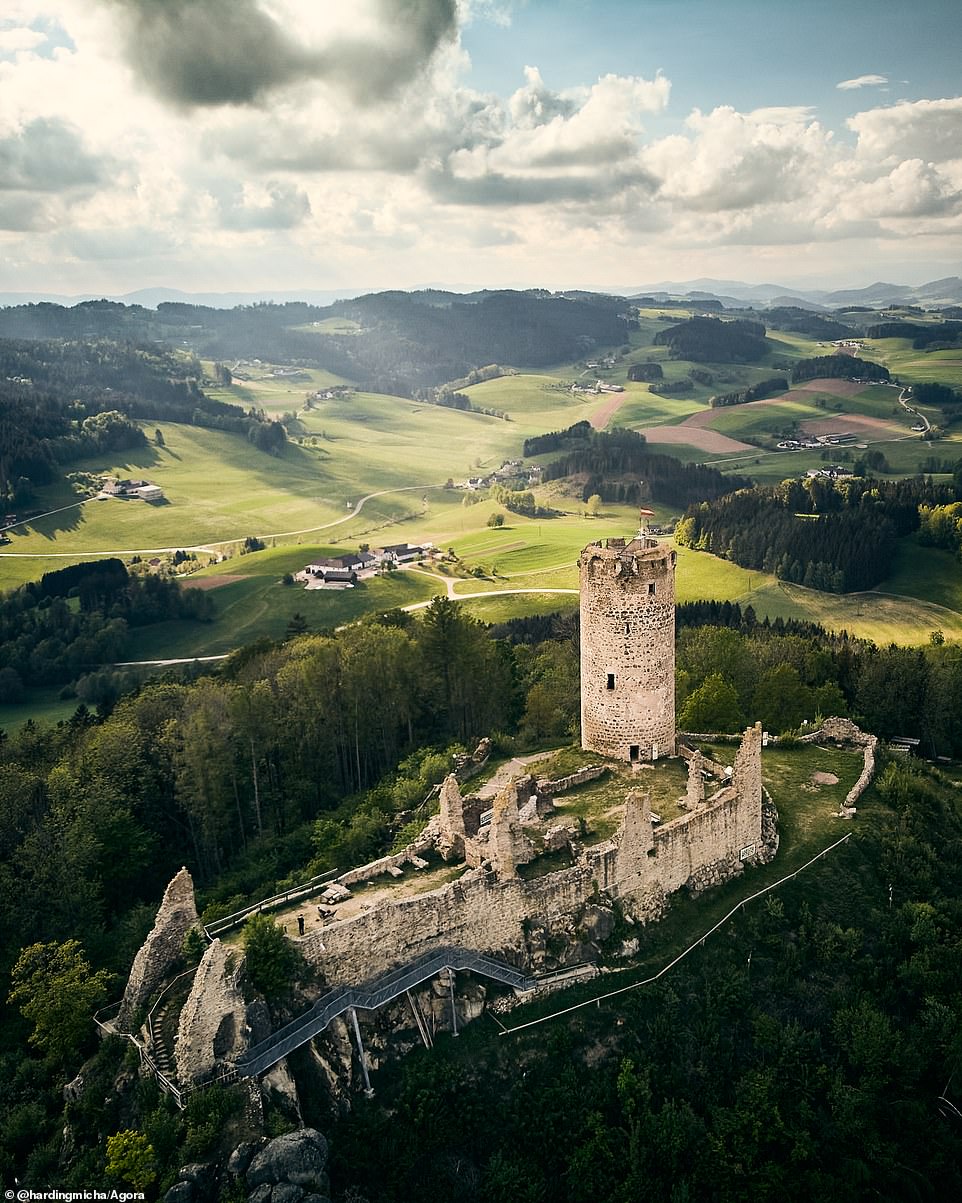 Austrian Michael Harding is behind this beautiful image of castle ruins in his home country. He said: ‘This region has so much history and a lot of old castles! This castle was built around 1100AD and I find it really impressive that there is still so much left of this old buildings’ 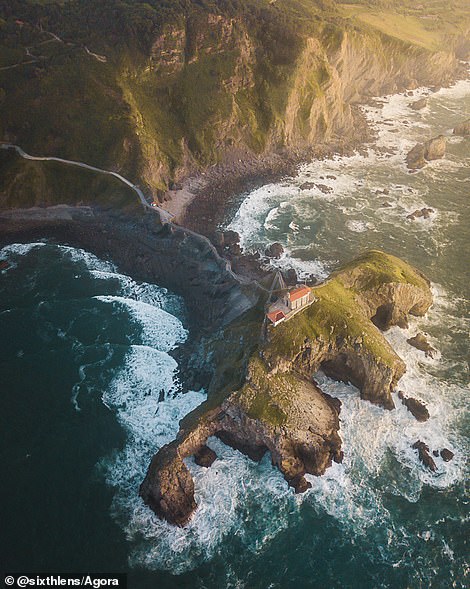 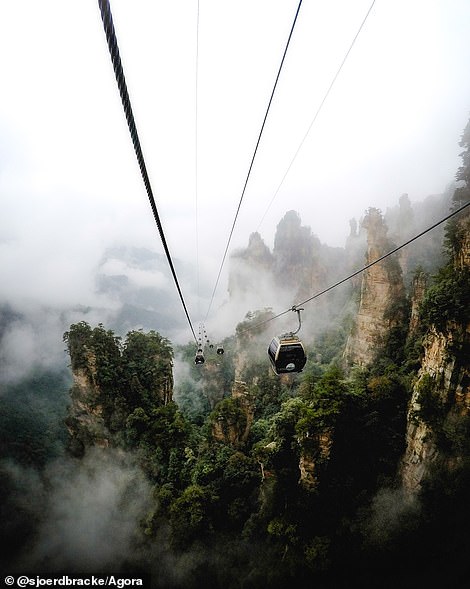 On the left is an amazing image by Italian photographer Matteo Mangano of a tiny island off the coast of the Basque Country in Spain. Matteo said: ‘A tiny island joined to the mainland by a bridge clinging to rocks and stacks – one of the best places I’ve ever visited! That day was super windy. I flew my drone about three kilometres away to get this shot and I was so worried that I would never see it again. Fortunately, it came back and it was definitely worth it.’ On the right is an image by Dutch photographer Sjoerd Bracke. It shows the cable cars inside Zhangjiajie National Park in China. He said: ‘During our ride, it was a misty and cloudy morning, which is why this scenery looks even more mysterious. We couldn’t believe our eyes when we rose above the clouds and this view appeared. I absolutely love the result and the feeling it transmits because when I look at this photo I get this mysterious feeling and wow-effect back immediately’ 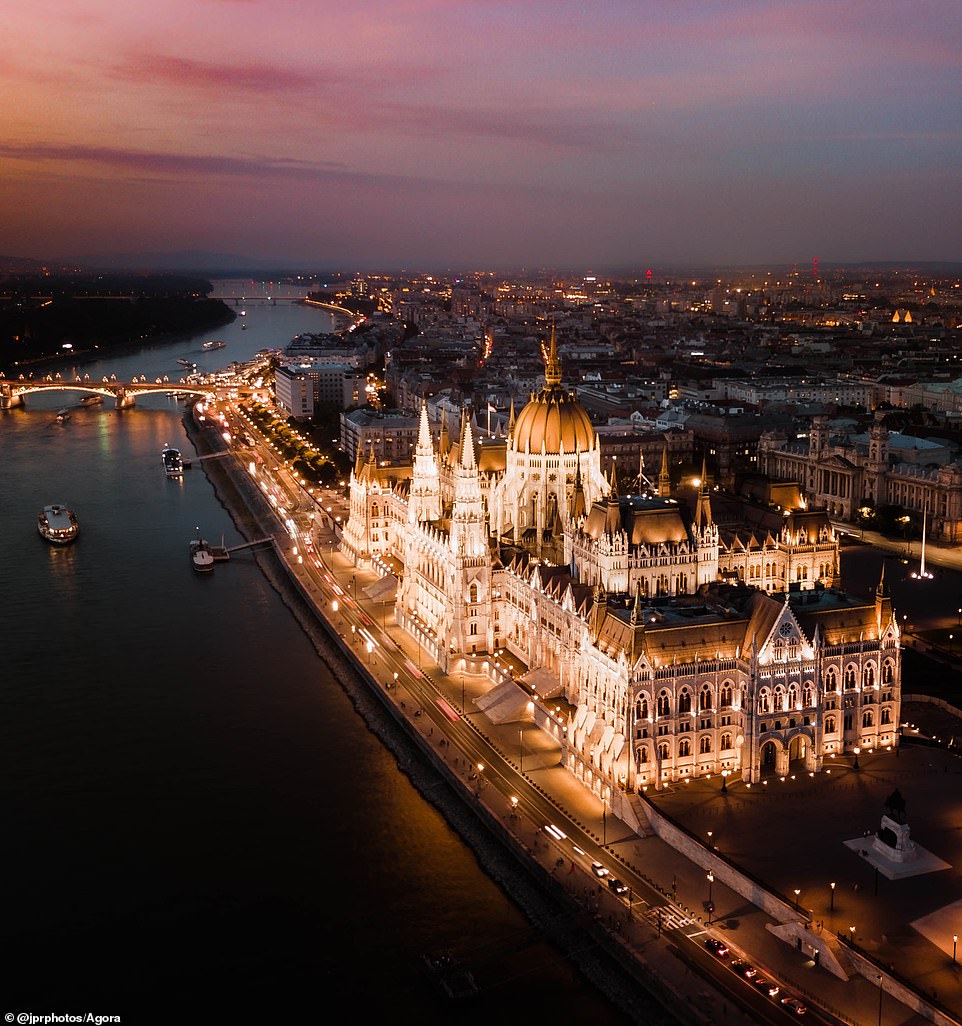 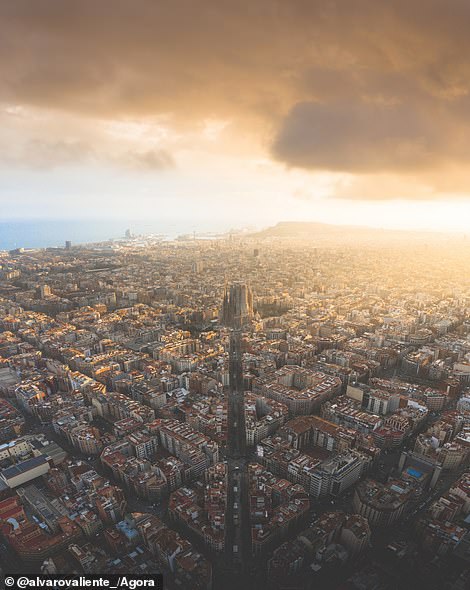 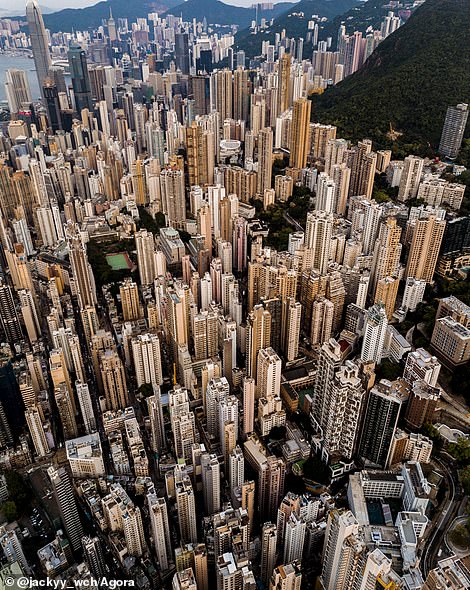 On the left is an aerial shot of Barcelona that was captured at sunset by Spanish photographer Alvaro Valiente. He said: ‘It took me a whole year to get this shot right. I waited patiently for the sun to set in this exact position, so the light creates a path straight to the Sagrada Familia.’ On the right is a jaw-dropping image showing the Central and Western District of Hong Kong that was captured by Jacky Woo, who is based in the city 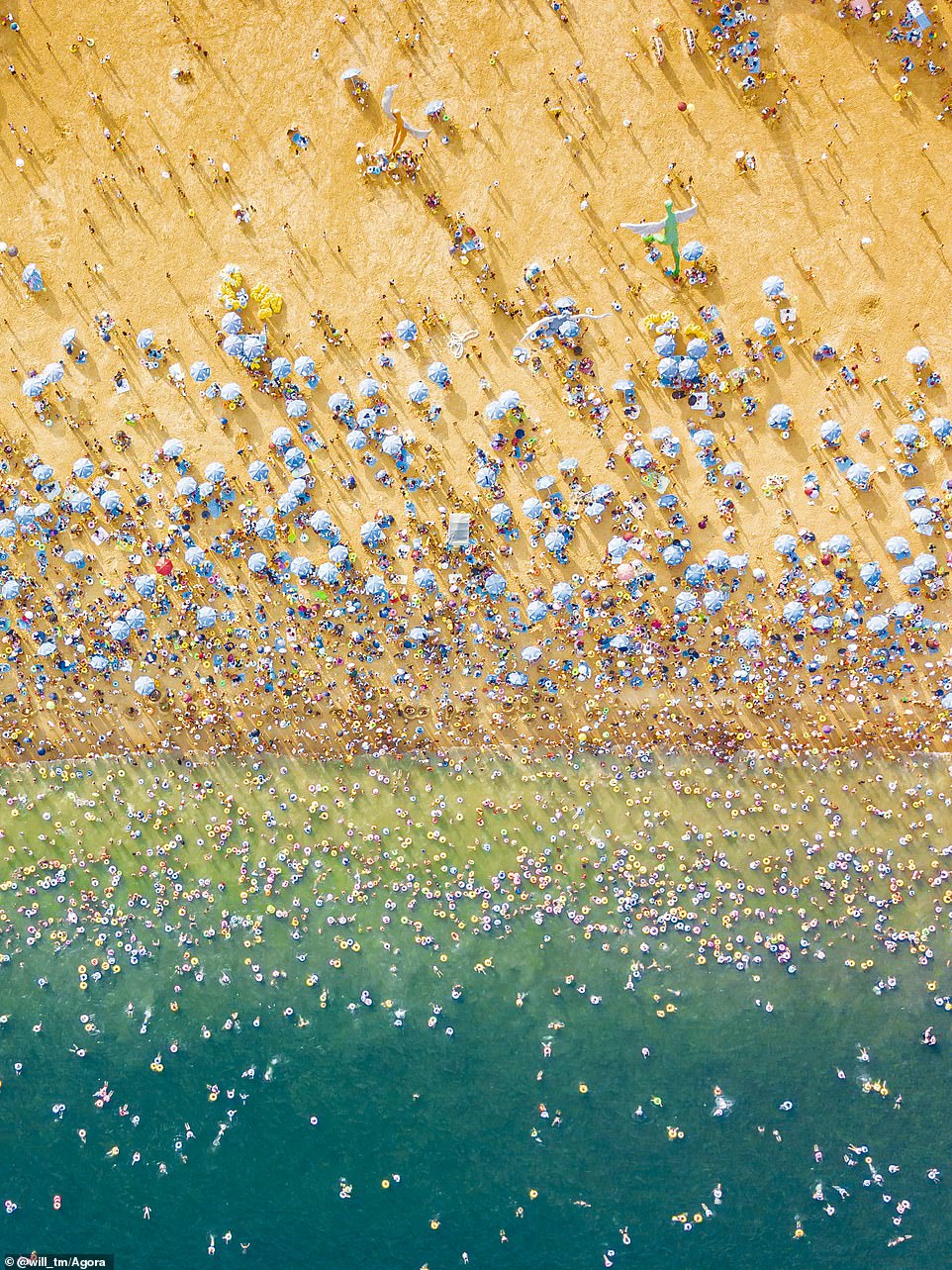 French photographer William Markezana captured this amazing scene of a crowded Dameisha beach in China. He explained: ‘This is a public beach next to a five-star hotel. The hotel had its own private beach right next to it, which was empty. I was initially interested in capturing that contrast. The crowd density was so high, I had to gain quite a lot of altitude to make it fit in the frame. At that point, those indistinguishable people started to create a pattern that I found even more powerful and fascinating’ 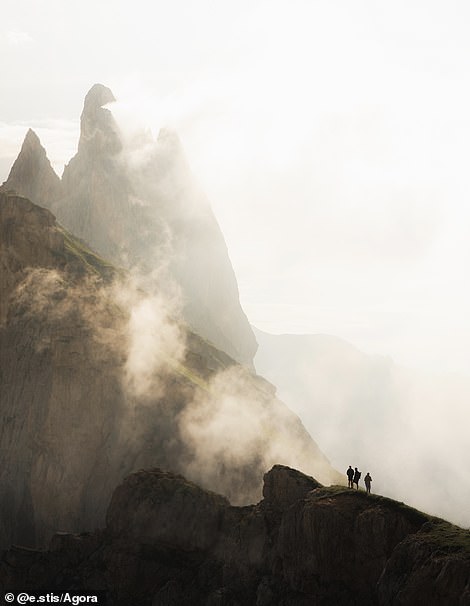 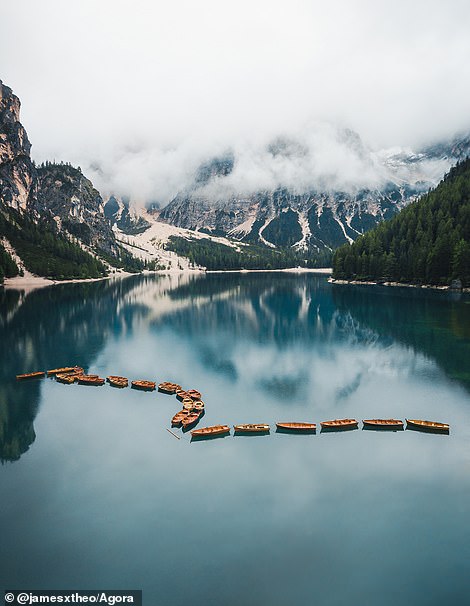 On the left is an image by Ester Turri, from Italy, who captured this misty morning on Seceda, an 8,200ft (2,500m) mountain in northern Italy. She said: ‘It was a moody summer morning, just how I like them.’ Pictured right is a serene scene at Lago di Braies in the Italian Dolomites captured by UK-based photographer James Theo. He explained: ‘The Dolomites area is full of picturesque landscapes, and no trip would be complete without a visit to Lago di Braies. I arrived in the hope of a sunset, but that did not happen. Instead, I was greeted with some moody conditions with loads of low clouds. I enjoy shooting in challenging conditions and I was still determined to get some shots of this beautiful place’ 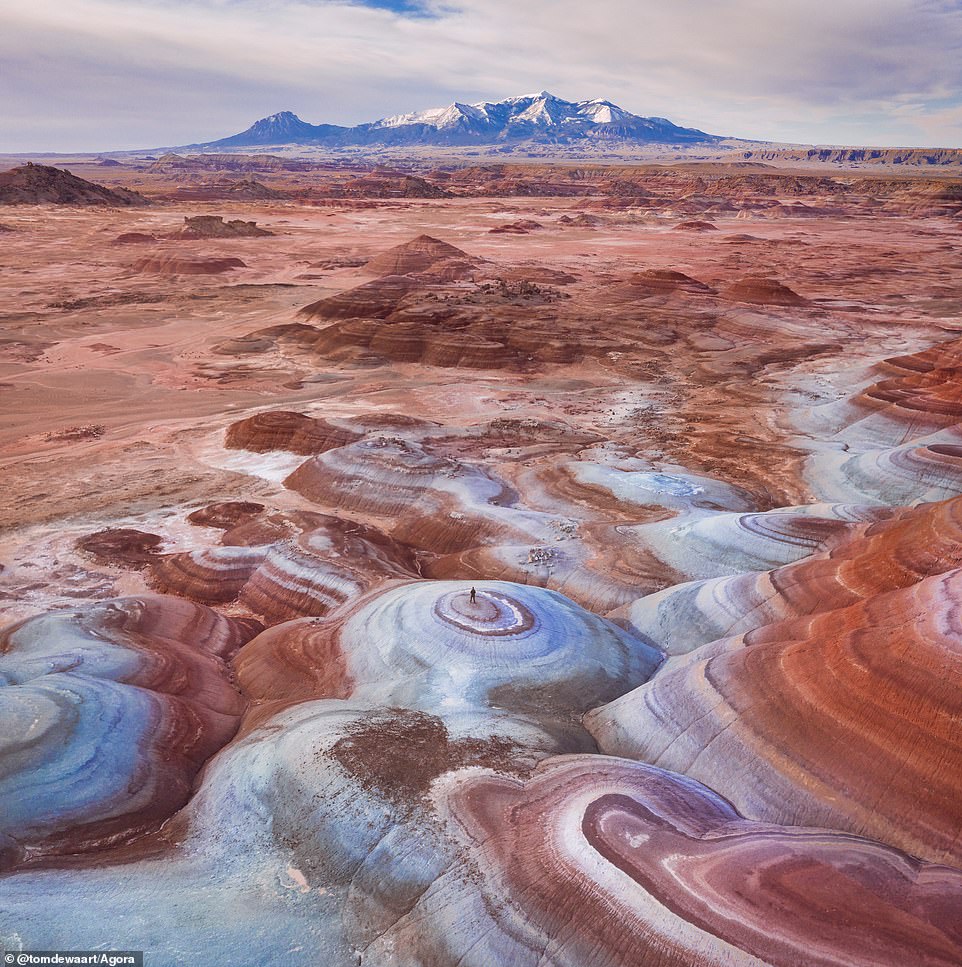 This image is called ‘Life on Mars’ and was snapped by Dutch photographer Tom Franklin de Waart in Capitol Reef National Park, Utah. Tom said: ‘I wanted to show that our planet has landscapes that look like they are out of this world. We don’t need to go to Mars to find these kinds of landscapes. Like in most of my photos, I want to make people realise we can find beauty on this planet. We need to take care of nature. Many times you see that when a location gets popular, tourists overcrowd the place and basically ruin it. If you decide to visit these kinds of places just leave nothing but footprints!’

For more on Agora visit agoraimages.prowly.com.