These pictures capture the extraordinary beauty of Planet Earth – and drive home just how important it is that we fight to protect it.

They’re the winning photographs from the 2022 Photo Contest run by environmental organisation The Nature Conservancy, which works to ‘find paths to solve climate change and biodiversity loss’.

This year, more than 100,000 entries from 196 countries worldwide were submitted, with ‘some entries serving as a stark reminder of the critical importance of conservation efforts that help all living things thrive together’. Trumping the competition, a powerful drone shot of a Tibetan highway by Chinese photographer Li Ping has been named the overall winner.

Other pictures that impressed the judges include a poignant shot of a leopard carrying the carcass of a mother monkey in its jaws, a striking image of storm clouds looming over a touristic Cuban beach and a picture of a seal fiercely defending her pup from a bird of prey in the Falkland Islands.

Commenting on the awards, Meg Goldthwaite, Chief Marketing and Communications Officer for The Nature Conservancy, says: ‘These incredible images from talented photographers all over the world remind us how connected we are to each other and to this beautiful planet, and at the same time of the challenges we face.

‘It energises us as we work to conserve the lands and waters on which all life depends, so that future generations can enjoy the same natural wonders depicted in these amazing photos.’ Below is MailOnline Travel’s pick of the spectacular winners and finalists – make your way to the very bottom to see the picture that takes the top prize… 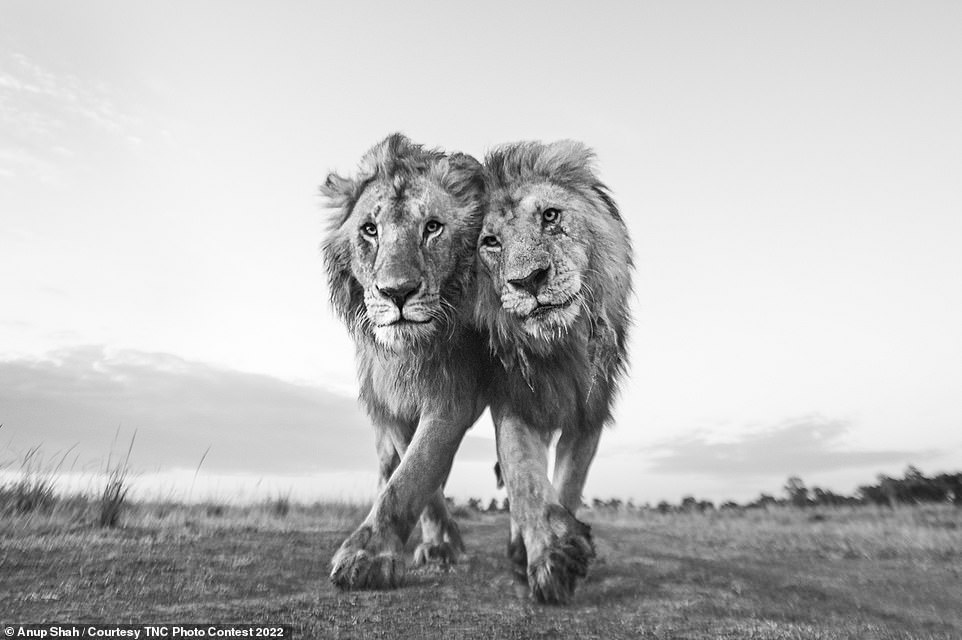 British photographer Anup Shah took this captivating picture of a pair of lions in Kenya’s Maasai Mara National Reserve. The photographer explains that the lion on the right is Morani, an elder lion who is one of ‘Four Musketeers’ – four lions that ‘ruthlessly’ ruled the Maasai Mara a ‘long time ago’. He adds that on the day the picture was taken, there was ‘a hint of a faint breeze’ in the air but ‘otherwise, a pure stillness’ reigned. Impressing the judges, the picture snaps up the gold medal in the Wildlife category 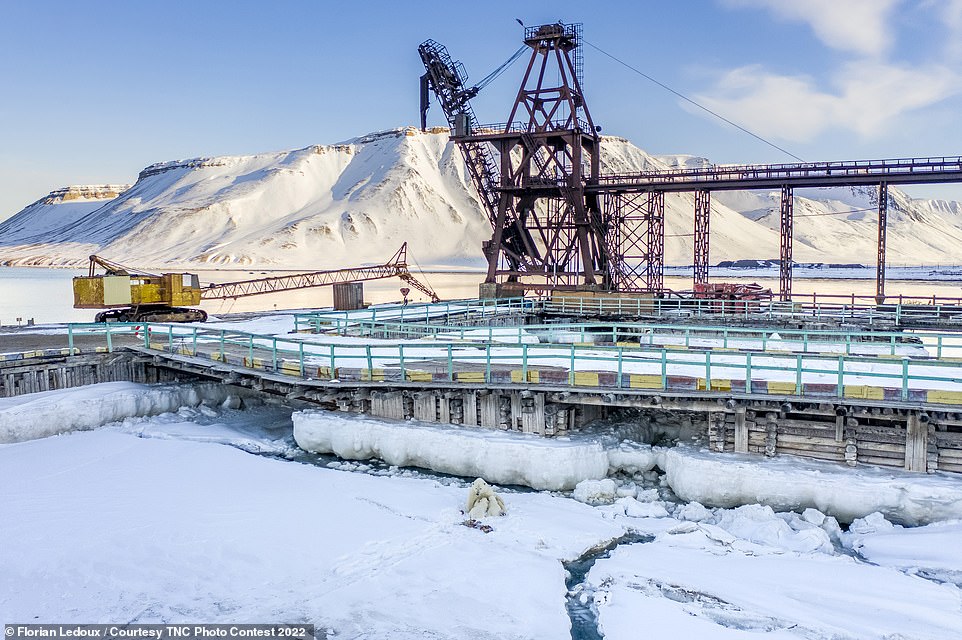 This is celebrity judge Coyote Peterson’s choice picture. Captured by Norwegian photographer Florian Ledoux, it shows a female polar bear breastfeeding her cubs in the harbour of Pyramiden, an abandoned Russian mining settlement on the Norwegian archipelago of Svalbard. ‘Often the bears here roam into the human infrastructure left behind with all sorts of pollutants,’ the photographer explains. Praising the picture as ‘absolutely beautiful’, Peterson – who is a YouTuber and a wildlife educator – says: ‘The abandonment of the Russian settlement is a powerful statement that nature can and hopefully will reclaim its rightful place. For an animal like the polar bear, which is physically running out of space for existence due to constantly melting sea ice, the bravery it shows for a mother to find a place of refuge for her cubs is a heartwarming scene amongst the frigid feel this entire vision portrays’ 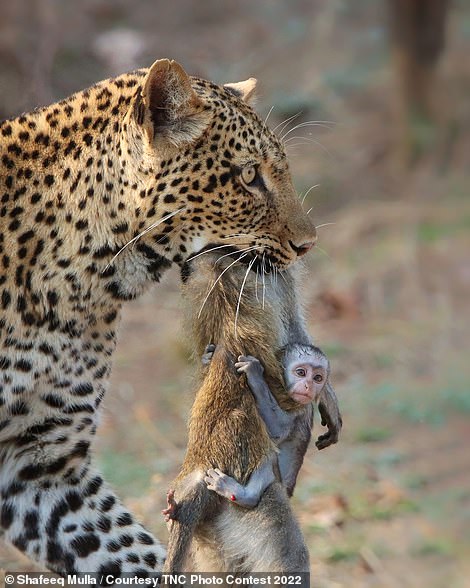 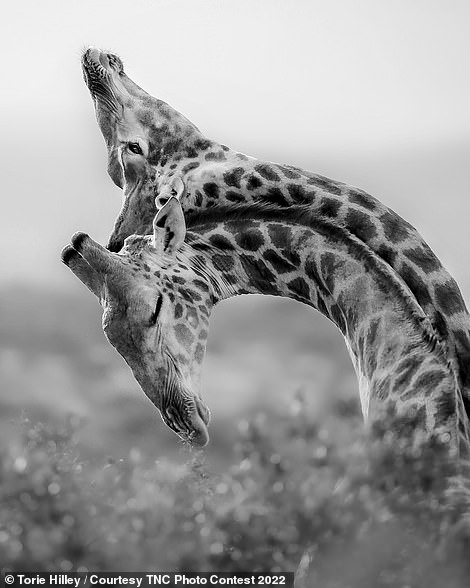 LEFT: This shocking photograph is the winning shot as chosen by guest judge Ami Vitale, a renowned conservation photographer. Captured by Zambian photographer Shafeeq Mulla, the picture, taken in Zambia’s South Luangwa National Park, shows a leopard named Olimba carrying ‘the carcass of a female vervet monkey with its baby still hanging on for dear life’. RIGHT: American photographer Torie Hilley captured this picture of a pair of giraffes during a visit to South Africa. ‘We came across these two young bull giraffes ‘necking’ – which is their form of sparring or fighting,’ she recalls, adding: ‘Most people think when they see this photo that it is a sign of affection, but once they read the description, the context becomes very different.’ The picture, titled ‘A Giant’s Ballet’, scoops an honourable mention in the Wildlife category 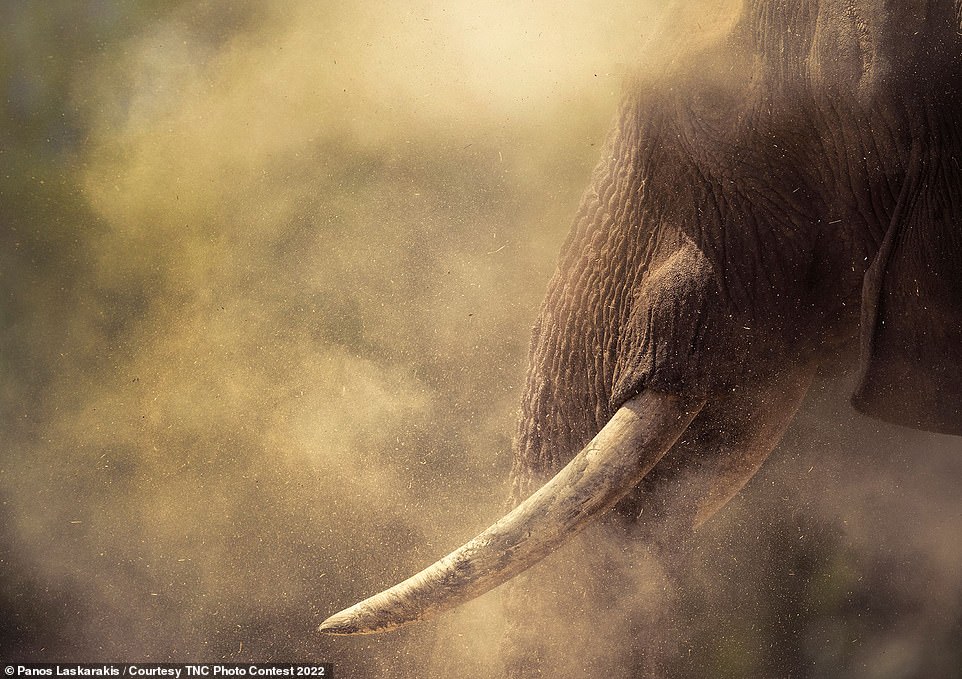 Behold the silver medal winner in the Wildlife category. Portraying an African elephant in Namibia, it’s the work of Greek photographer Panos Laskarakis, who says that the dust that the ‘supergiant’ sends into the air is ‘one of the best spectacles in wild Namibia’ 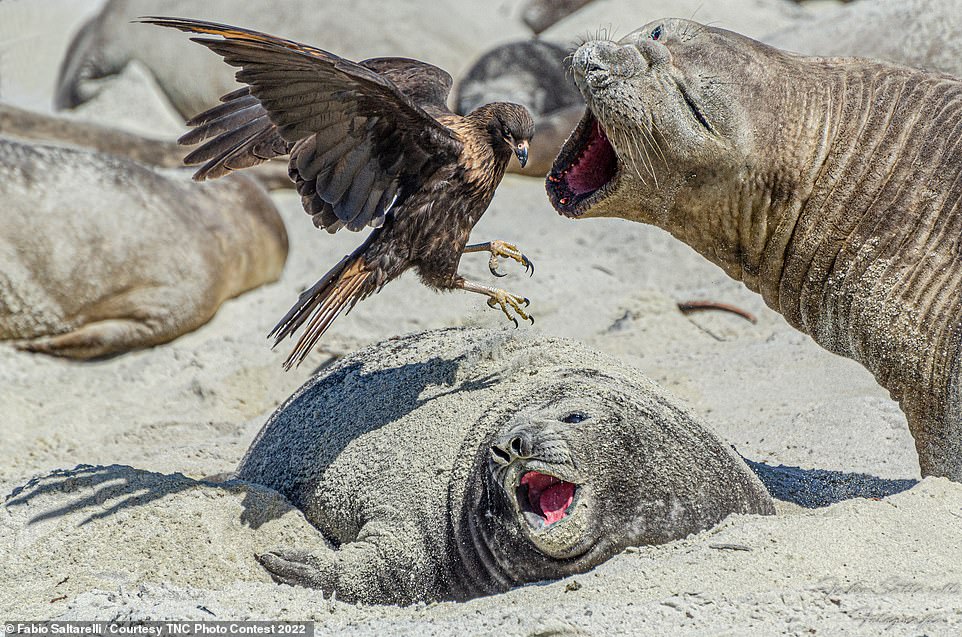 This eye-opening image, snared by Argentinian photographer Fabio Saltarelli, earns an honourable mention in the Wildlife category. It shows an elephant seal defending her pup from the ‘stalking’ of a caracara austral (a bird of prey) in the Falkland Islands 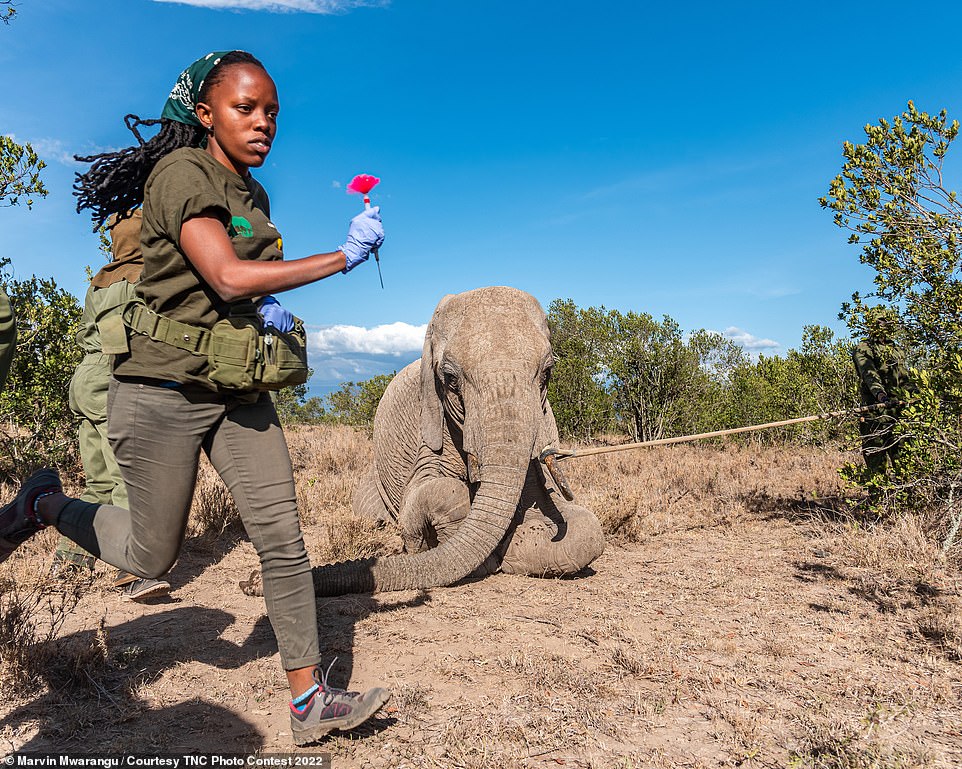 Describing this fascinating picture of an elephant and a vet, which was taken this summer in Kenya’s Ol Pejeta Conservancy nature reserve, Kenyan photographer Marvin Mwarangu says: ‘As the mother is sedated, a veterinarian works quickly to diagnose and treat an elephant calf’s wound.’ The image earns an honourable mention in the People and Nature category 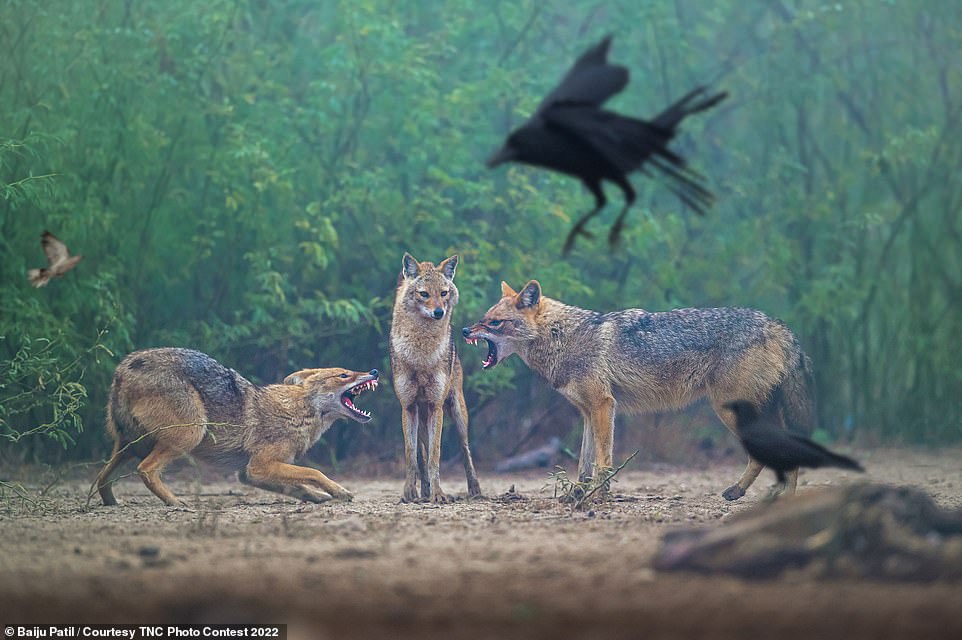 Keoladeo National Park, formerly known as Bharatpur Bird Sanctuary, on the edge of the Indian city of Bharatpur was the setting for this dramatic picture of a trio of Asiatic jackals ‘fighting’ one another. The image, taken by Indian photographer Baiju Patil, bags an honourable mention in the Wildlife category 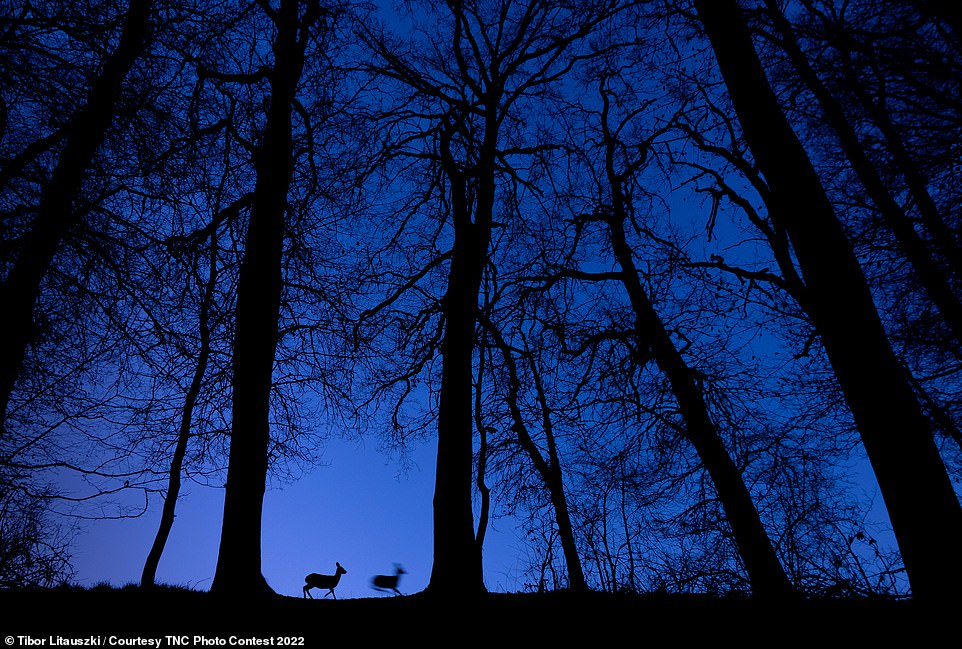 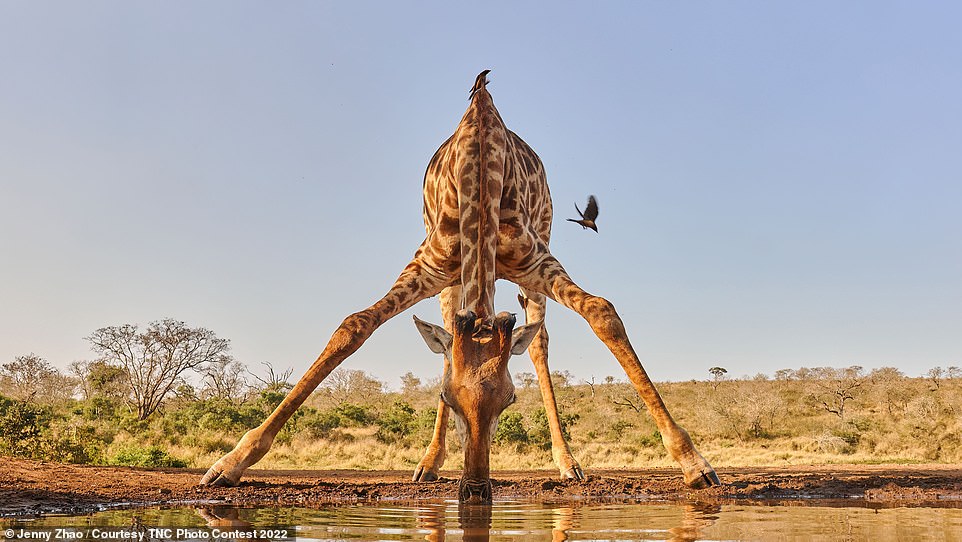 This dynamic shot of a giraffe drinking at a waterhole whilst ‘accompanied by an oxpecker’ was captured at Zimanga Private Game Reserve in South Africa. Taken by U.S photographer Jenny Zhao, it receives an honourable mention in the Wildlife category 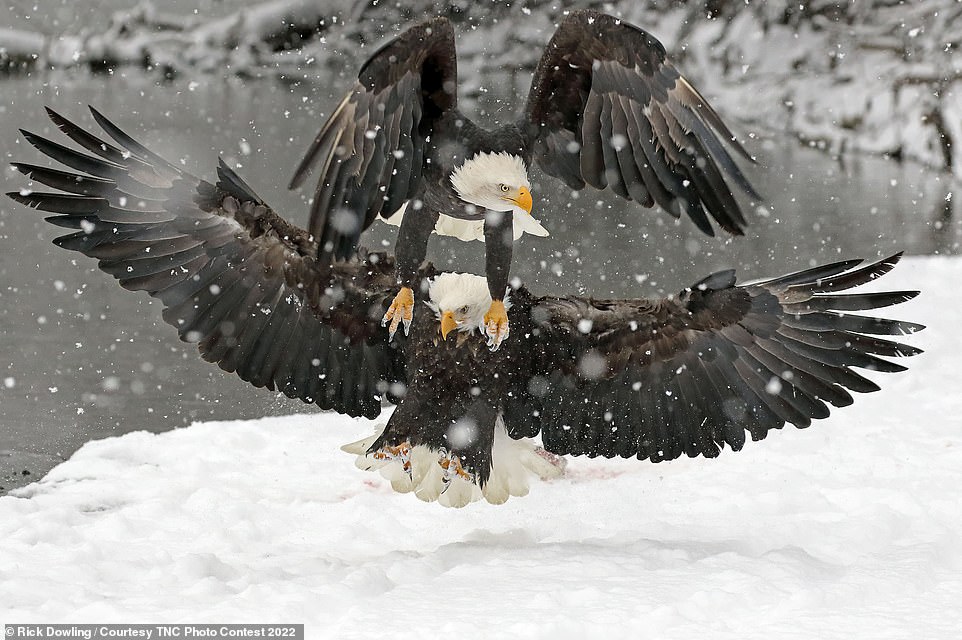 U.S photographer Rick Dowling was behind the lens for this dramatic shot, which portrays a pair of eagles that ‘were fighting for a piece of salmon’ at the Bald Eagle Festival in Haines, Alaska. Dowling recalls: ‘The eagle on top flew on top of the second eagle to try and get the salmon.’ The picture gets an honourable mention in the Wildlife category 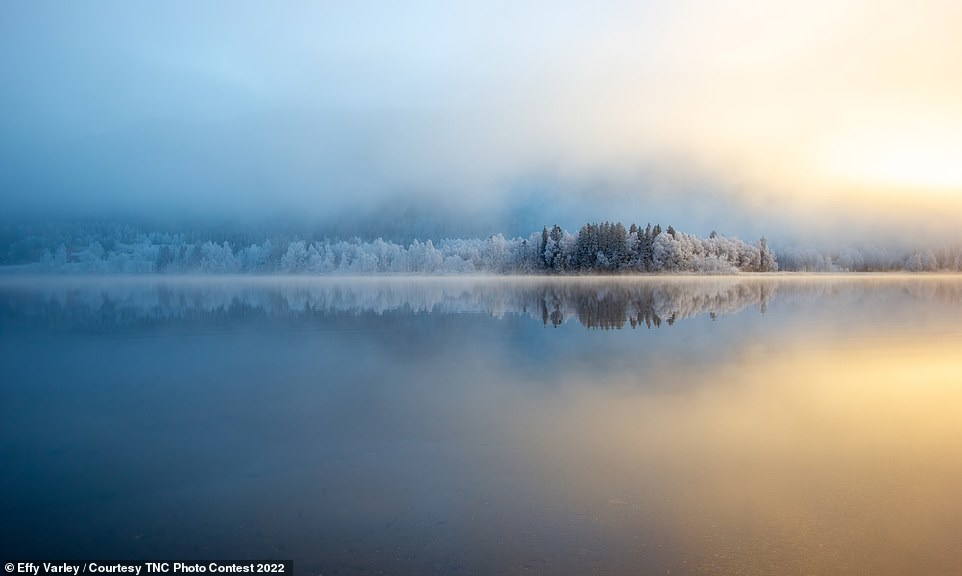 UK photographer Effy Varley captured this breathtaking picture – which scoops an honourable mention in the Landscape category – in Norway. ‘When I think of silence, I think of here,’ she says, recalling: ‘Everything was still except for my breath, which would occasionally rise in front of my face and break my view of this beautiful lake. Perched on a bench with my nose and fingers going numb, I stared into the fog for what felt like hours. The mist slowly thinned giving a glimpse of the trees on the other side’ 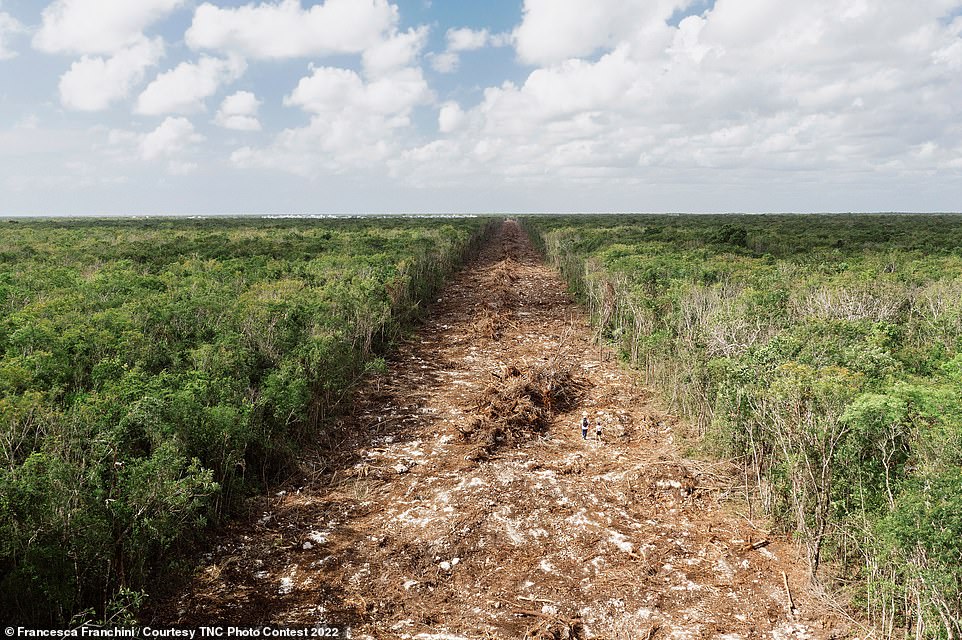 This poignant picture shows where the Mayan Train, an intercity railway that is currently under construction, will run through the jungle of Mexico’s Yucatan Peninsula. Native photographer Francesca Franchini, who was behind the lens, says that the railway project ‘will affect the best-preserved jungle in the country’, which is an area that ‘protects a great biodiversity of species’. She adds that ‘the most important source of fresh water in Mexico’ lies beneath the jungle. The image takes home an honourable mention in the People and Nature category 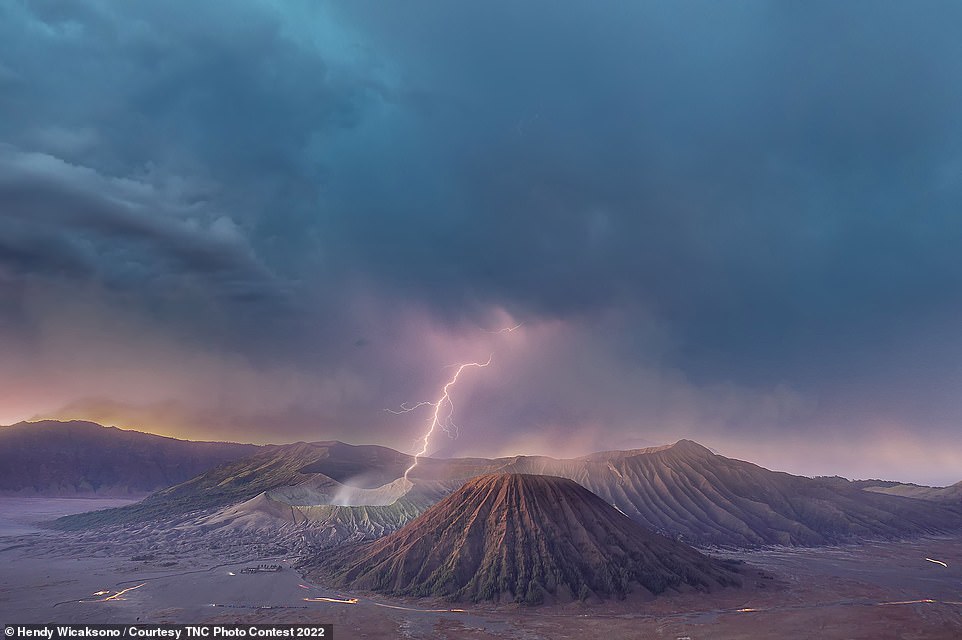 A lightning bolt shoots down from the skies in this astonishing shot of the ‘splendour’ of Mount Bromo, an active volcano in Indonesia’s Bromo Tengger Semeru National Park. Indonesian photographer Hendy Wicaksono describes the national park as ‘one of the 10 priority tourist destinations in Indonesia’, adding that its mountainous landscape ‘stretches around 50,276 hectares (124,230 acres)’. The photograph has been awarded second place in the Landscape category 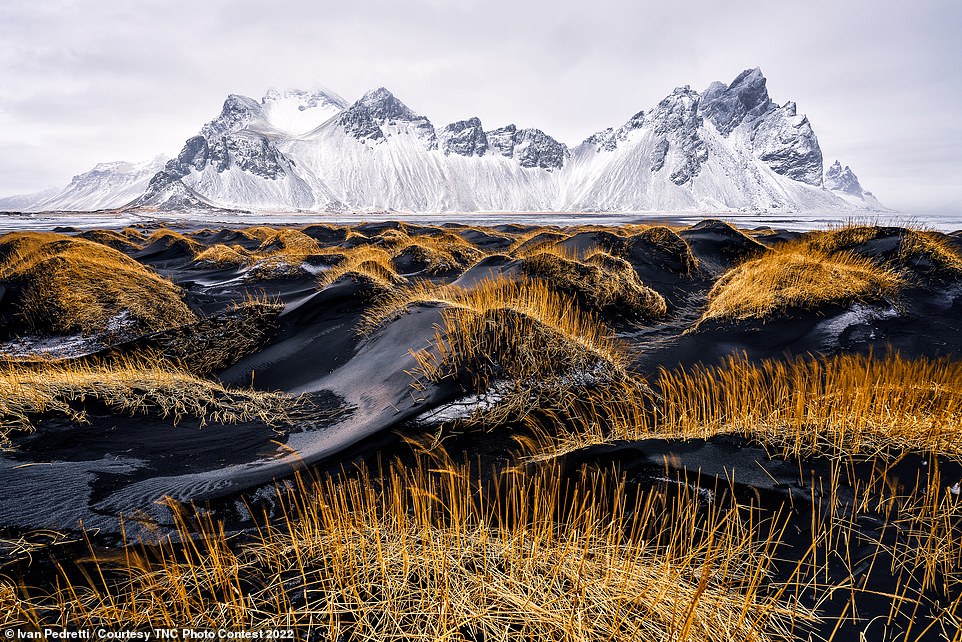 Stokksnes peninsula in southeastern Iceland was the setting for this brilliant picture, which shows a black sand beach with the ‘majestic’ Vestrahorn mountain in the background. ‘I like the difference in colours between the white mountains and the black dunes with the yellow grass,’ Italian photographer Ivan Pedretti reveals. The picture earns an honourable mention in the Landscape category 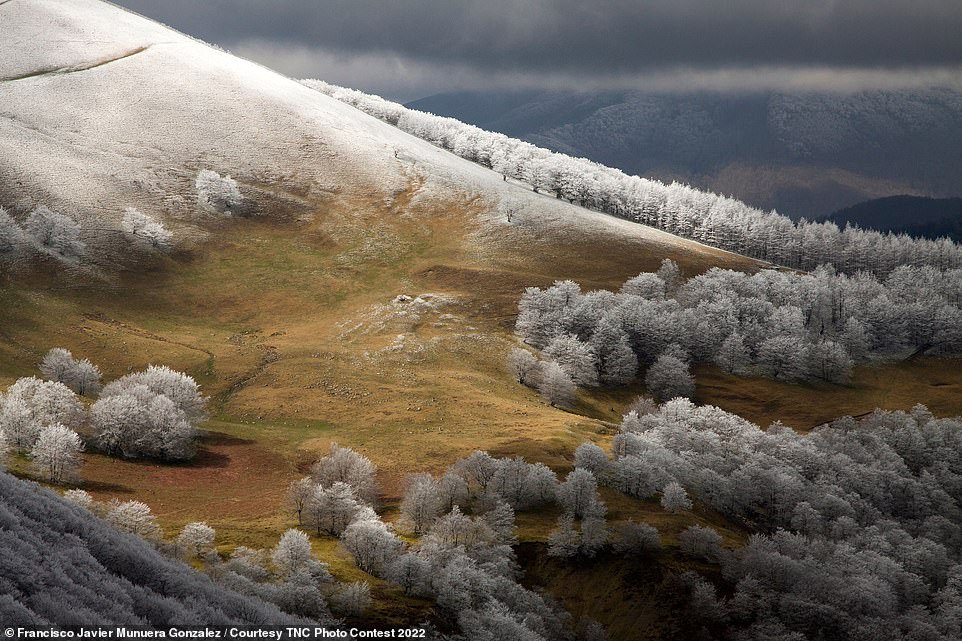 Topping the podium in the landscape category is this beautiful photograph of trees dusted with frost on the mountain of Monte Adi in Navarre, northern Spain. Spanish photographer Francisco Javier Munuera Gonzales was behind the lens 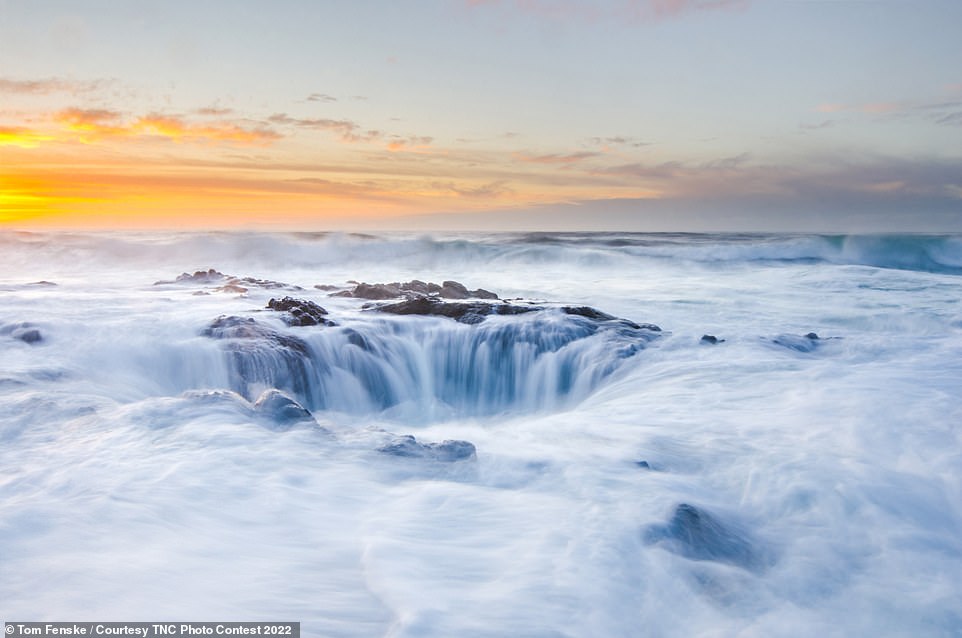 An honourable mention in the Water category has been handed to this picture by American photographer Tom Fenske. It shows Thor’s Well, also known as the Drainpipe of the Pacific, a ‘natural hole in the rock’ south of Yachats, along the Oregon Coast. ‘When the tide is just right the ocean seems to drain away through the hole,’ Fenske reveals 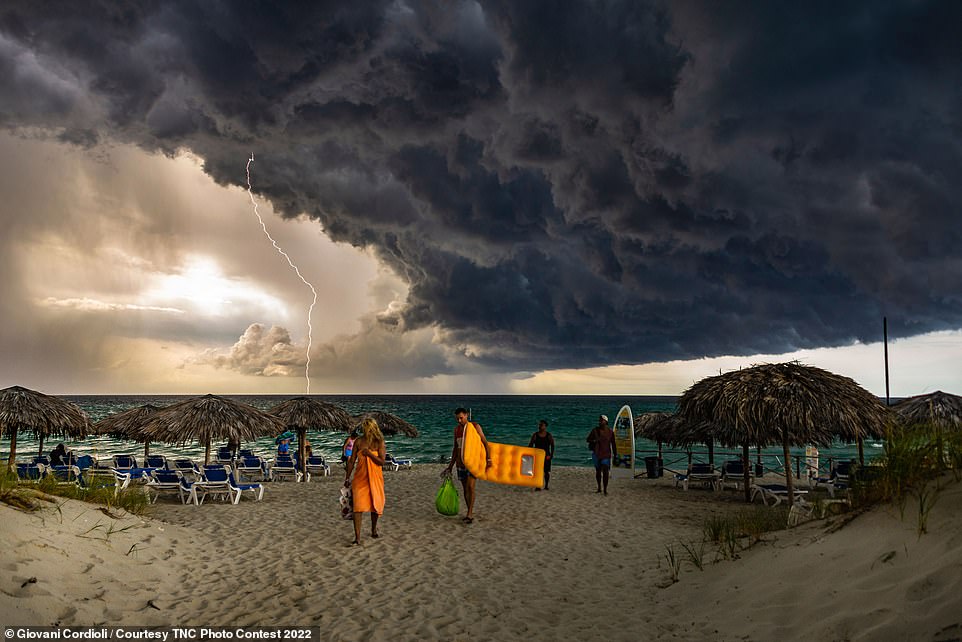 An ominous storm cloud looms over the parasols and sun loungers of Cuba’s Varadero beach in this shot, taken by Brazilian photographer Giovani Cordioli. ‘I captured the exact moment when the lightning strikes the sea,’ he notes. The picture receives an honourable mention in the People and Nature category 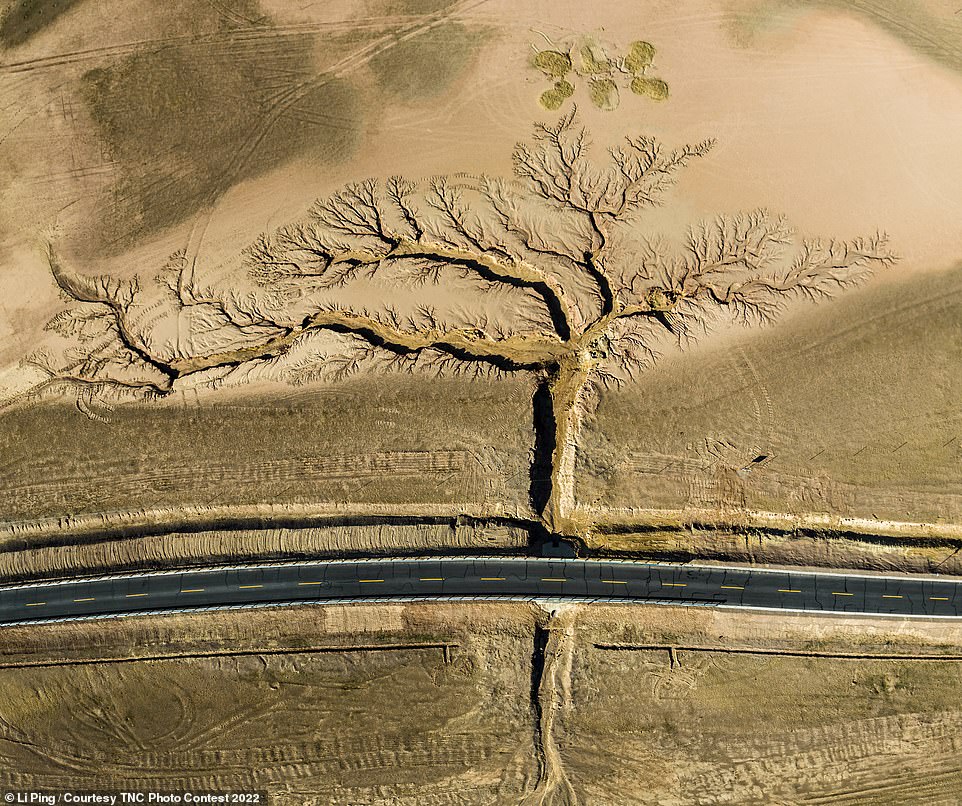 Feast your eyes on the overall winner, captured by Li Ping. Describing the shot, which was taken in Tibet in southwest China, Ping says: ‘On either side of a highway, gullies formed by rainwater erosion span out like a tree.’ The photographer took the picture in the early hours of the morning with a drone, after spending a night sleeping alone in a roadside parking lot