Be ready to get your (house) party started! Celebrate the end of lockdown in style by taking friends and family on a UK holiday to one of these fantastic houses

It may be unimaginable at the moment but one day in the future we will be able to throw the ultimate post-lockdown celebration with friends and family.

And where better than in a palatial holiday pad?

Here we round-up the best properties to rent around the UK, including an uber-modern beach house in Northern Ireland, a grand castle in Somerset and a luxury barn conversion in Norfolk.

Dazzle in the Dales 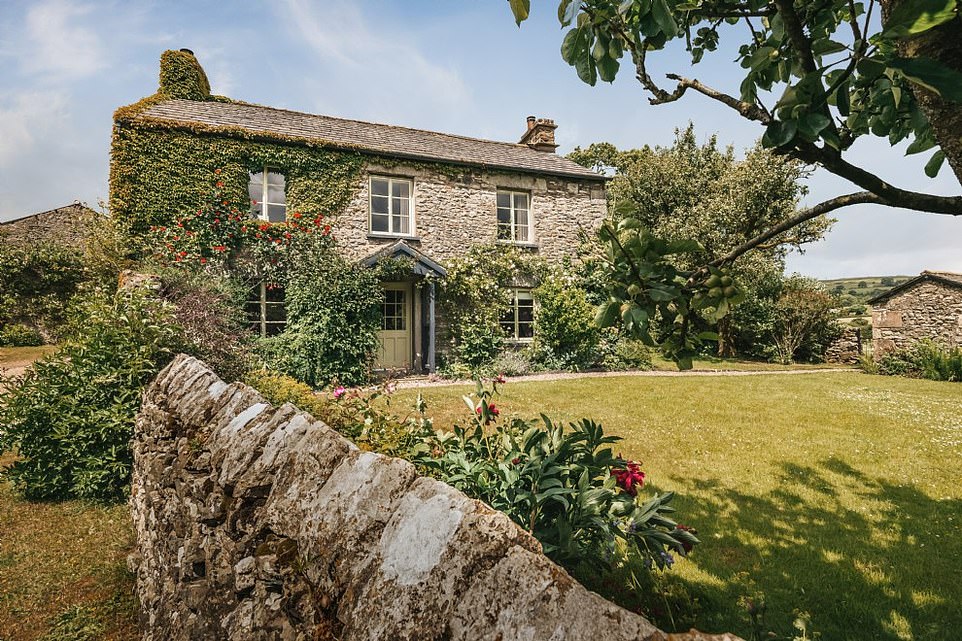 Figtree House is set in 17 acres in Kirkby Lonsdale, on the borders of the Lake District and the Yorkshire Dales

Figtree House: You get two national parks for the price of one by staying at five-bedroom Figtree House. Set in 17 acres in Kirkby Lonsdale, it’s on the borders of the Lake District and the Yorkshire Dales. While the 17th Century farmhouse looks quaint from the outside, inside has been beautifully done up by the owner, an interior decorator, with a kitchen to die for and wood and stone floors.

Ride your own steam train

The Hyde: There’s a large private steam railway in the gardens of this medieval house on the Netherwood Estate near Ludlow in Herefordshire, as well as a tennis court, hot tub and mini maze. What was the Great Hall in the beautifully restored house is now a charismatic dining room with an inglenook fireplace and a huge modern kitchen. Upstairs, beneath the beams, are six bedrooms (eight more can be booked in an adjacent cottage).

Cost: A week in August costs from £5,000 but use of the railway is extra. (netherwoodestate.co.uk)

A manor with a regal feel

Great Tangley Manor: The joy of this listed house in Guildford? It’s within easy reach of the M25 but is also in an Area of Outstanding Natural Beauty, with walks in the Surrey Hills and by the River Wey. The three-acre estate comes with Victorian gardens, a tennis court, lake and an indoor swimming pool. King George V slept in one of the five elegant bedrooms in 1913, and there’s a regal feel in the wood-panelled dining room. 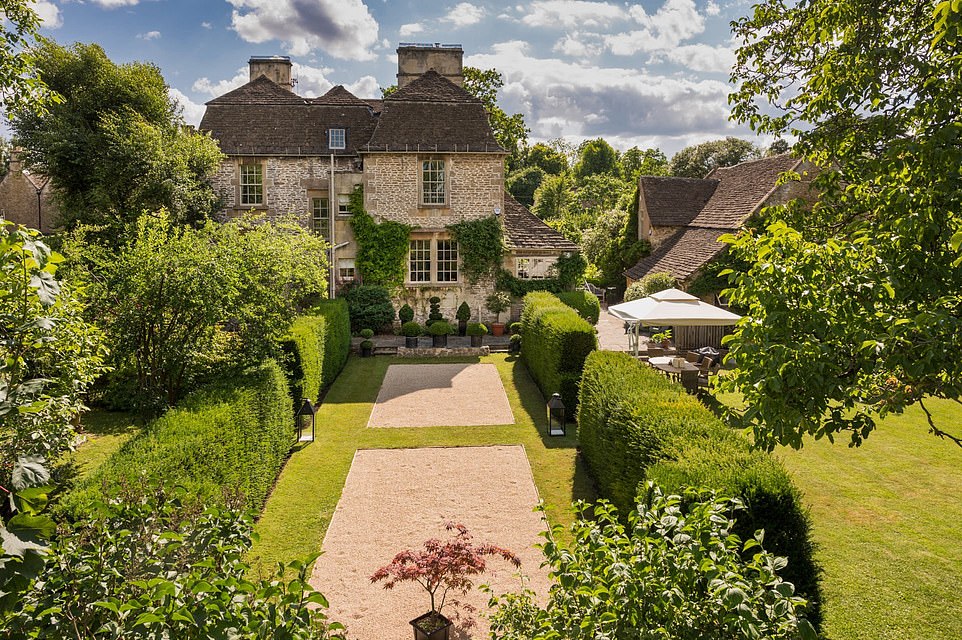 Set on the edge of the Cotswolds, Pickwick End sits in walled gardens with manicured lawns ideal for croquet or boules

Pickwick End: The six bedrooms in this Georgian house in Corsham, Wiltshire, have a boutique hotel feel about them, done out in a muted palette with a feature fireplace here or a padded window seat there. Public areas have had the same care lavished on them, with twin dishwashers and ovens in the homely kitchen, and the kind of sitting rooms you’d like in your own home. Set on the edge of the Cotswolds, the house sits in walled gardens with manicured lawns ideal for croquet or boules.

Cost: A week in August costs from £3,629. (luxurycotswoldrentals.co.uk) 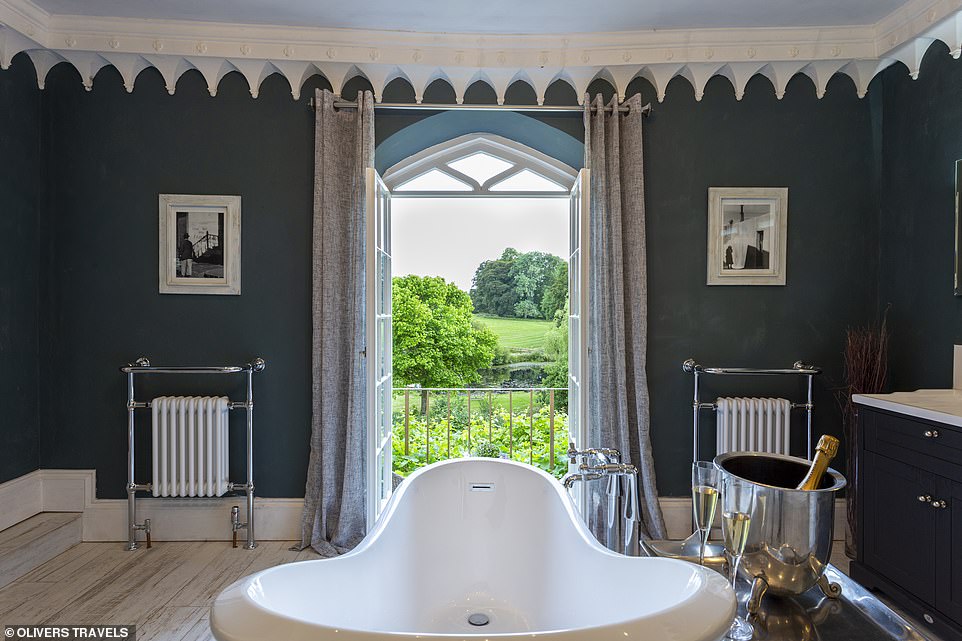 Colleton Hall is a Grade II listed manor in Devon with six bedrooms. Pictured is the view from the slipper bath in one of the rooms

Colleton Hall: Between Exmoor and Dartmoor in Devon, this Grade II listed manor in Rackenford comes with 38 acres of parkland and woodland and a lake for canoeing. While the south-facing grounds are the real wow factor, there are plenty of lovely features inside too, from the Gothic reception hall and baby grand piano, to the games room with pool table, and a slipper bath with a view in one of the six bedrooms.

Cost: A week in September costs from £4,148. (oliverstravels.com)

Get close to wildlife

Choristers’ House: Watch red, fallow and sika deer from the enclosed garden of this house on the 400-acre deer park of Yorkshire’s Fountains Abbey estate. A former music school near Ripon, it is now a National Trust property with five bedrooms, done out in a simple but comfortable style. Guests get free access to the abbey ruins and Studley Royal Water Gardens, or you can head to the North York Moors.

Broadgate House: There is oodles of space here, on the 1,000-acre Cragg Estate close to the Northumberland National Park. Fish on the River Rede, enjoy star-gazing under clear skies, or go for endless hikes. The house has been tastefully done out, with an open-plan kitchen/dining area, an attractive snug and a formal drawing room and dining room. There are four smart bedrooms in the main house and another two in the annexe.

Beckstone: Should the wonders of the Lake District not be entertainment enough, there’s a cinema room in this Victorian house in Bowness, Cumbria, as well as a games room with snooker and table football. The beautiful interiors, featuring a mahogany staircase and modern kitchen, have a Laura Ashley feel. Outside, the terrace and lawns are wrapped by a 470-acre estate, and it’s just a ten-minute walk to the viewpoint on Brant Fell.

Cost: A week in August costs from £5,100. (bighouseexperience.com)

Be the king of a castle 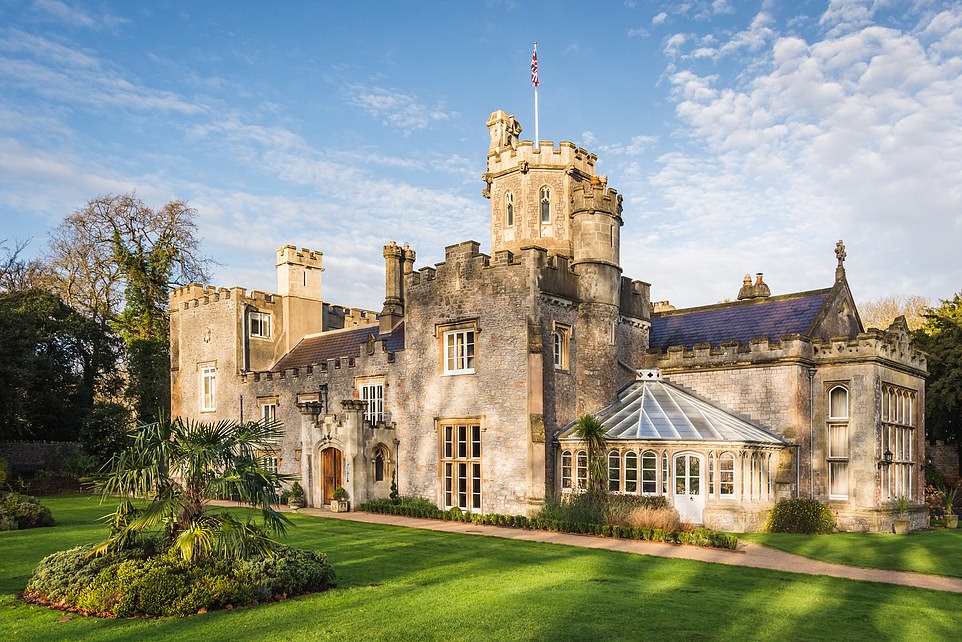 Elegantly restored with the help of English Heritage, Thornemead Castle in Somerset comes with a Victorian walled garden and wildflower meadow on the ten-acre estate

Thornemead Castle: Go the whole house-party hog and hire this Gothic castle in Somerset, with its wood-panelled dining room and vaulted games room lined with wallpaper designed by Pugin akin to that used in the Houses of Parliament. Elegantly restored with the help of English Heritage, the property comes with a Victorian walled garden and wildflower meadow on the ten-acre estate. And it’s an easy walk to the beach at Weston-super-Mare. 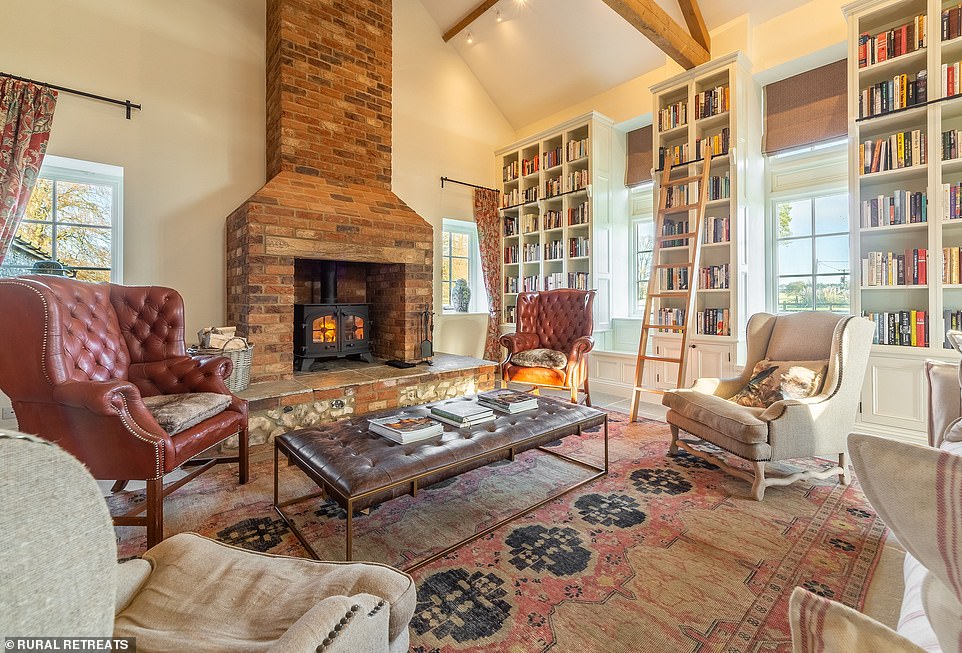 Pictured is the living area at Bodney Lodge in Norfolk. The property also has five bedrooms and a separate games barn

Bodney Lodge: An enormous oak-beamed open-plan kitchen/living room with a teak dining table and comfy seating area is the highlight of this beautifully converted barn and adjacent stable near Swaffham in Norfolk. One of the five bedrooms has a modern four-poster and copper bath, and there is a separate games barn. Walk through parkland belonging to Bodney Hall or fish on the River Wissey.

House In The Hills: Wallow in the hot tub here and gaze at the surrounding hills and vales of the Brecon Beacons National Park near Hay-on-Wye. There are plenty of walking trails just outside the door. The three-bedroom stone farmhouse and separate two-bedroom barn have been done out in country style, while there’s a separate kids’ sitting room with games consoles.

Craigneuk: Surrounded by spectacular scenery, this Highland farmhouse with views over the Firth of Lorne, near Oban, Argyll, has plenty of outdoor space that’s ideal for country walks. The two-acre gardens slope down to the water, and it’s just a mile and a half walk to the sandy beach at Tralee. Inside, there are a brace of sitting rooms, as well as a separate dining room, although there are only two bathrooms shared between five bedrooms. 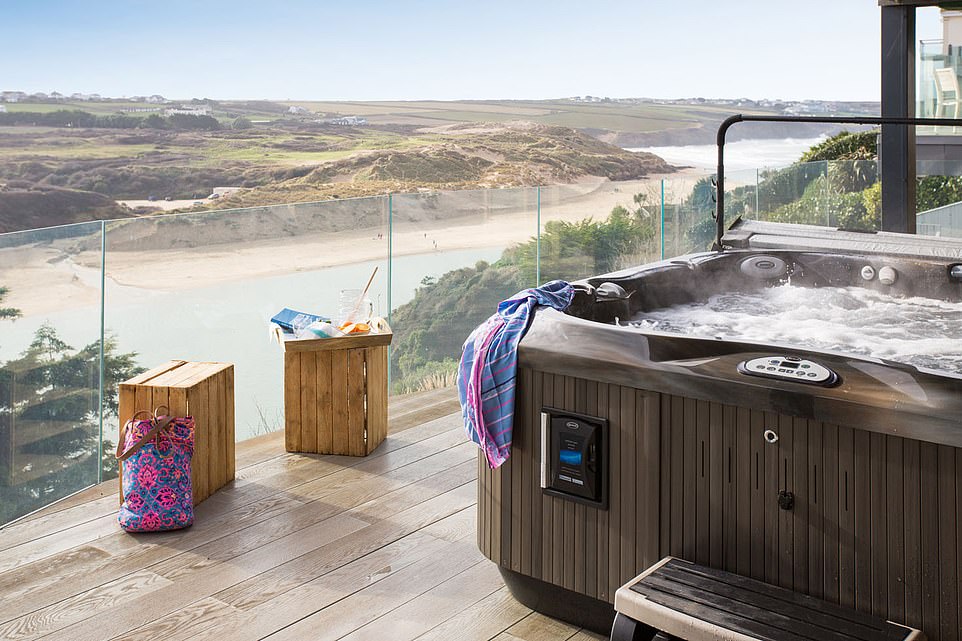 You can gaze over the Gannel Estuary and sandy Crantock Beach from the hot tub at River House in Newquay, Cornwall

River House: You’re spoilt with sea views at this cool, contemporary five-bedroom house in Newquay, Cornwall, where you can gaze over the Gannel Estuary and sandy Crantock Beach from the hot tub. The open-plan kitchen/living area, arranged over an entire floor, has all modern conveniences, from Sonos sound system and 64in TV to an American-style fridge. Dog-friendly Fistral Beach is nearby.

Take in the sea views 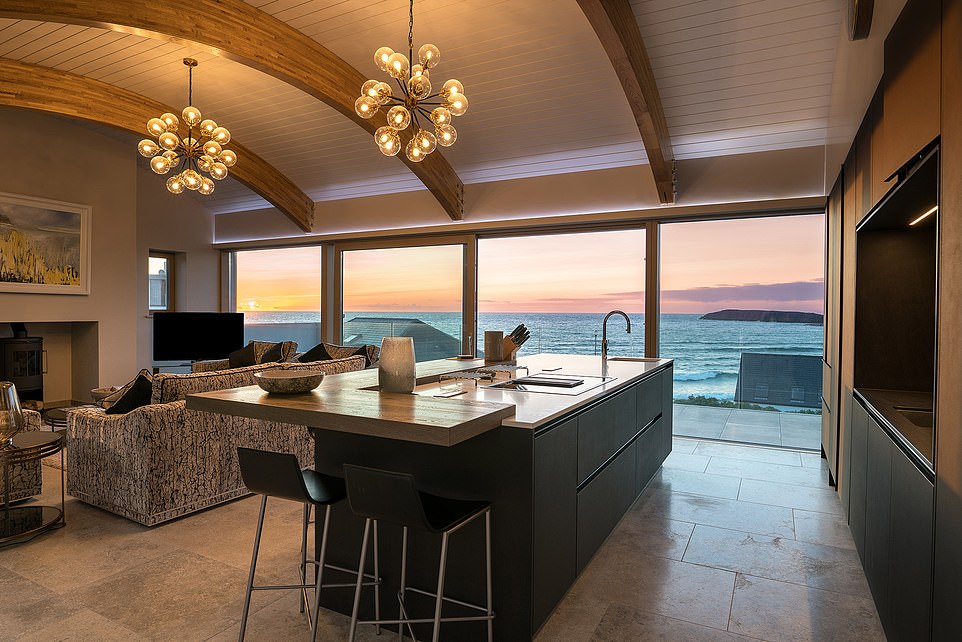 The pool’s a splash hit 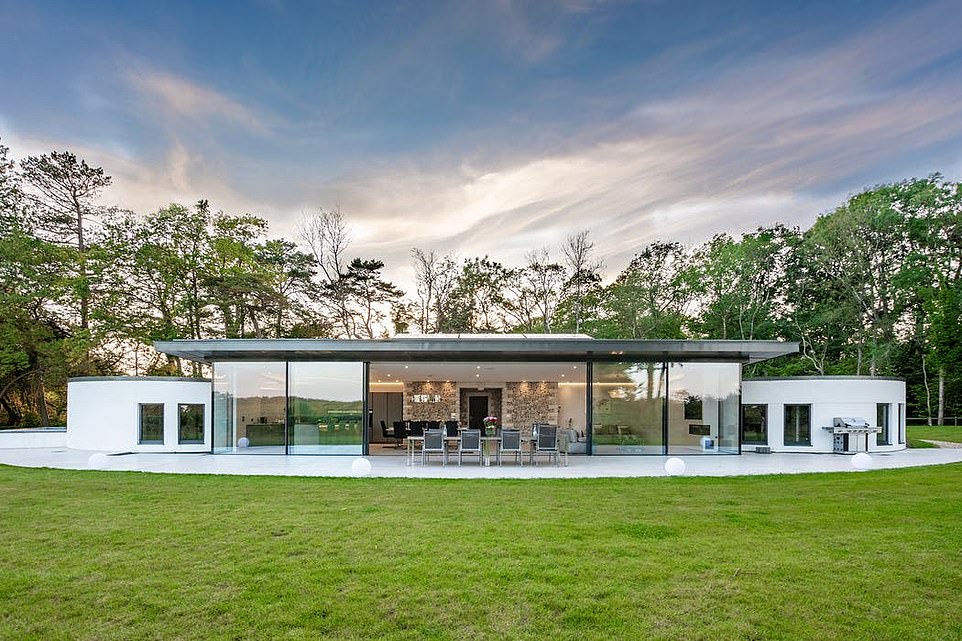 Sleek affair: There’s plenty to do at Water Tower in Devon thanks to a pool, steam room and games room

Water Tower: For an ultra-modern house party, look no further than this sleek affair in Rousdon, Devon, with a large open-plan glass-fronted living and kitchen area flanked by five bedrooms in calming tones. There’s plenty to do thanks to a pool, steam room and games room, or feel free to explore the 350-acre estate.

Mix of old and new

Temple Guiting Manor: You get the best of both worlds at this luxurious Cotswolds bolthole near Upper Slaughter: the character of exposed beams, secret staircases and a four-poster in one of the five bedrooms, plus a cinema room in one dovecote and a hot tub in another. There is also a tennis court in the grounds. 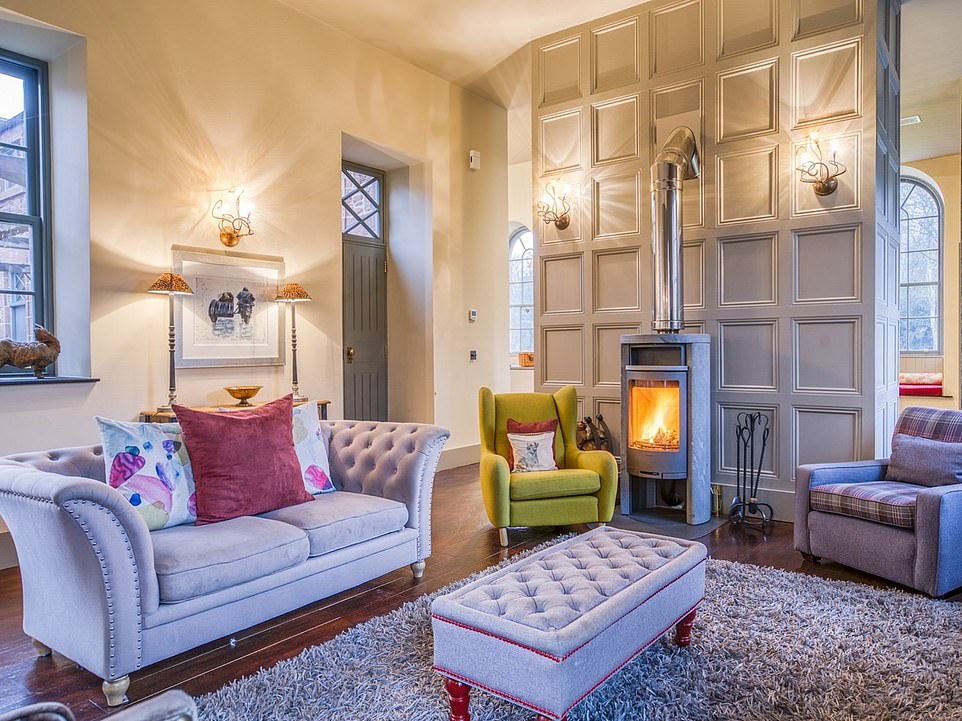 Wow-factor: Gather the clan at this beautiful stables conversion just outside Fettercairn, Aberdeenshire

The Stables at Fasque Castle: Gather the clan at this beautiful stables conversion just outside Fettercairn, Aberdeenshire, which is arranged around an attractive courtyard on a 400-acre estate near the Cairngorms National Park. As well as an enormous modern open-plan kitchen/lounge with all the goodies, there’s a large parquet-floored dining and sitting area and even a gym. The six bedrooms have a touch of Liberace about them – one has a gilt-framed bed, while another has a free-standing mahogany bath.

Go wild on the trails

Serenity: On North Wales’ Llyn Peninsula, with its coastal trails and beaches, this super-stylish house in Pwllheli, Gwynedd, is decorated in whites and greys, and boasts a fantastic double-height kitchen-diner as well as two sitting rooms. There’s plenty of space outside too – 15 acres of grounds – and Snowdonia is within easy reach. 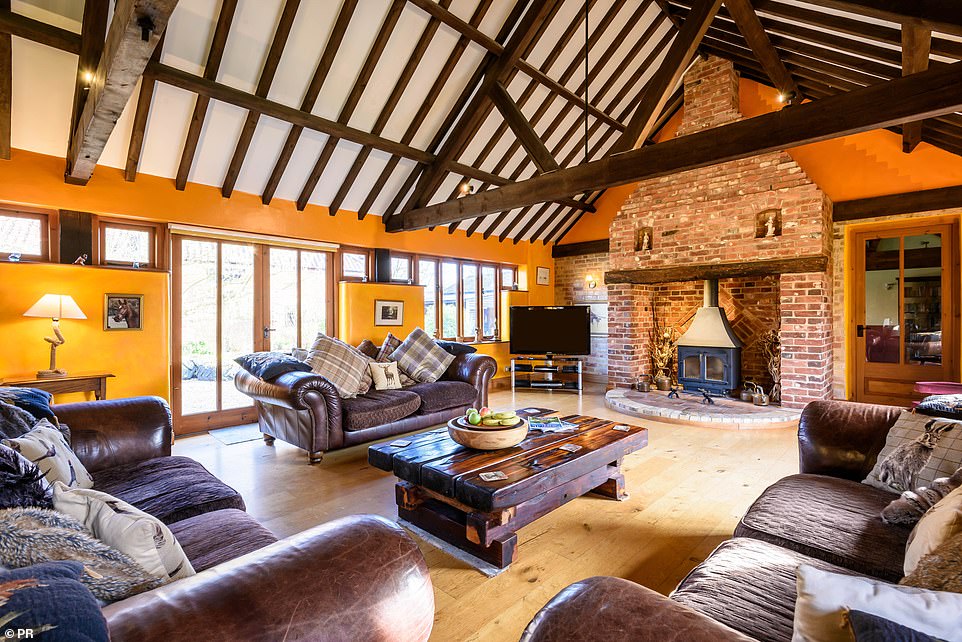 Original features: The beamed living space at Pantile Barn in Norfolk. The property also has a hot tub for relaxing

Pantile Barn: While the kids play in the games room, adults can soak in the hot tub at this five-bedroom barn conversion near Holt that’s perfectly situated for exploring north Norfolk’s coast. With original features including beamed rooms and tiled or parquet floors, you could also have a sing-song around the piano.

On top of the world

Trevose View: You’re bang on the rugged north Cornwall coastline at this clifftop eyrie on the path between Widemouth Bay and Bude. Coastal colours are reflected in the decor, with plenty of blues, tans and whites inside the single-level clapperboard house. Highlights are the kitchen and living area with sea views. One of the five bedrooms has bunk beds.

Cost: A week in September costs from £2,223. (helpfulholidays.co.uk)