Make this your year of holiday cheer: Travelling’s been a trial, but the world is opening up with glorious destinations galore. Here’s our 2022 line-up for globetrotters of every kind

Another frustrating year for travel has drawn to a close — but what lies ahead? We think there are good reasons to be optimistic about getting away in 2022. The USA is open; flights to Europe are ridiculously cheap and there are plenty of holidays on sale to exotic destinations such as Seychelles, Sri Lanka and Mexico.

Fritz Joussen, chief executive of holiday giant Tui, has predicted bookings for the summer will be ‘similar’ to the pre-pandemic levels of 2019. Andy Squirrell, managing director of Titan Travel, also reports that booking trends are ‘encouraging’. His company has recently added extra departures to meet demand with North American tours ‘leading the way’.

This year will also bring a feast of fresh adventures, new destinations and landmark anniversaries to entice us back on the road. Here’s our pick of the ten best places to go this year… 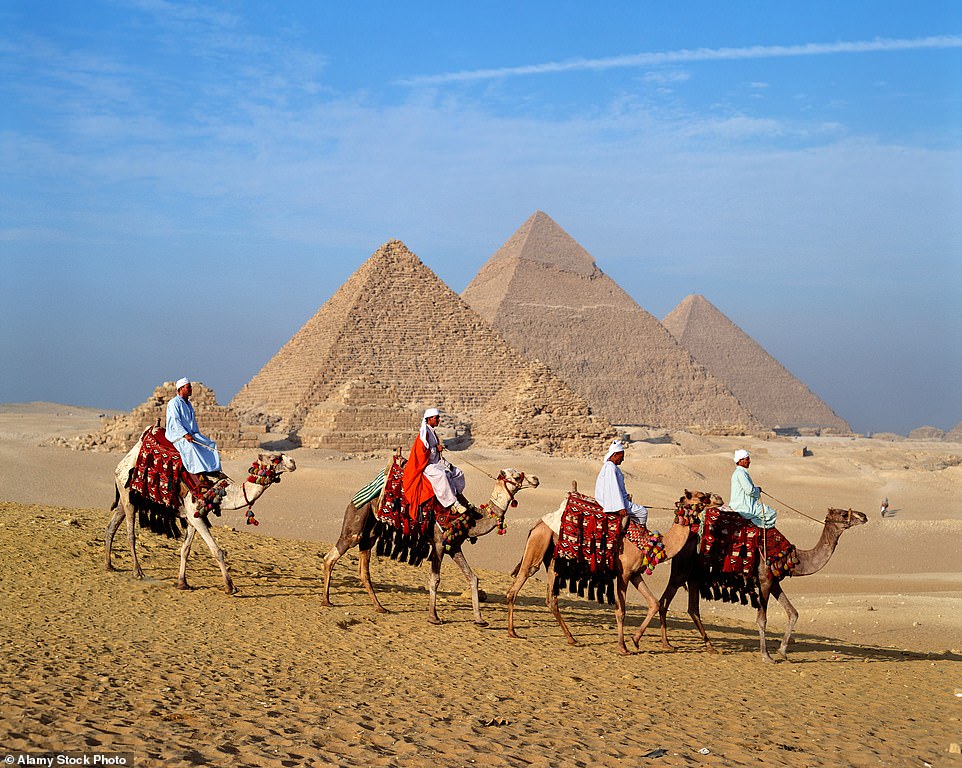 Cultured: Camels trek in front of the Pyramids at Giza. See the Pyramids for yourself on a seven-night Splendours of Egypt package with Cox and Kings

Egypt will be on a roll in 2022, starting with the release of the movie Death On The Nile, directed by Kenneth Branagh, on February 11. This year also marks 100 years since British Egyptologist Howard Carter discovered the tomb of the boy pharaoh Tutankhamun in Luxor and the 200th anniversary of the deciphering of the Rosetta Stone, which unlocked the mystery of hieroglyphs (egypt.travel).

DON’T MISS: The Grand Egyptian Museum in Giza will showcase 100,000 artefacts from ancient Egypt, including the entire King Tut collection.

BOOK NOW: A seven-night Splendours of Egypt package taking in the Pyramids, Valley of the Kings and a four-night Nile cruise costs from £2,595pp including flights, accommodation and most meals (coxandkings.co.uk). 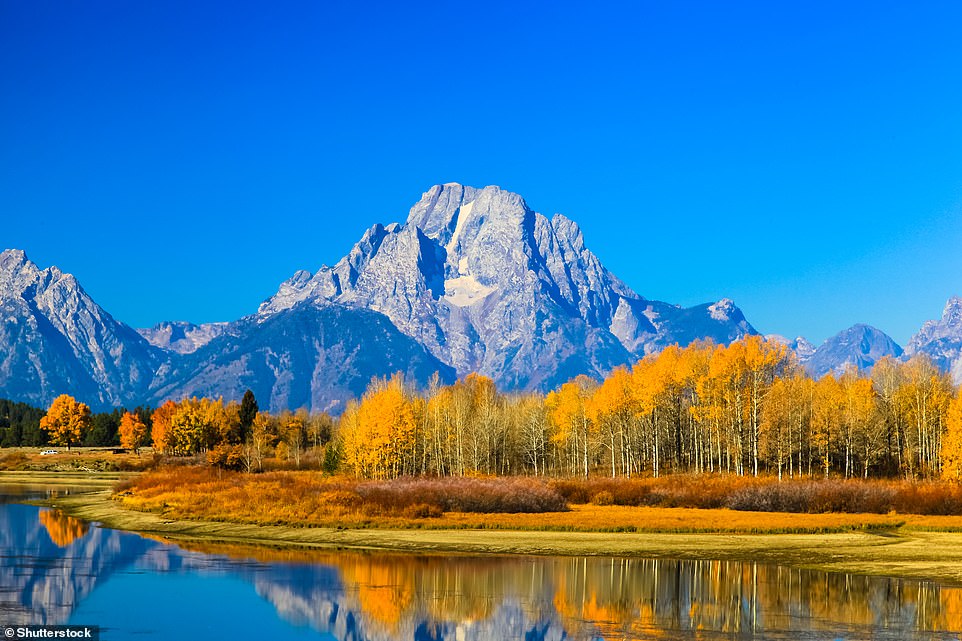 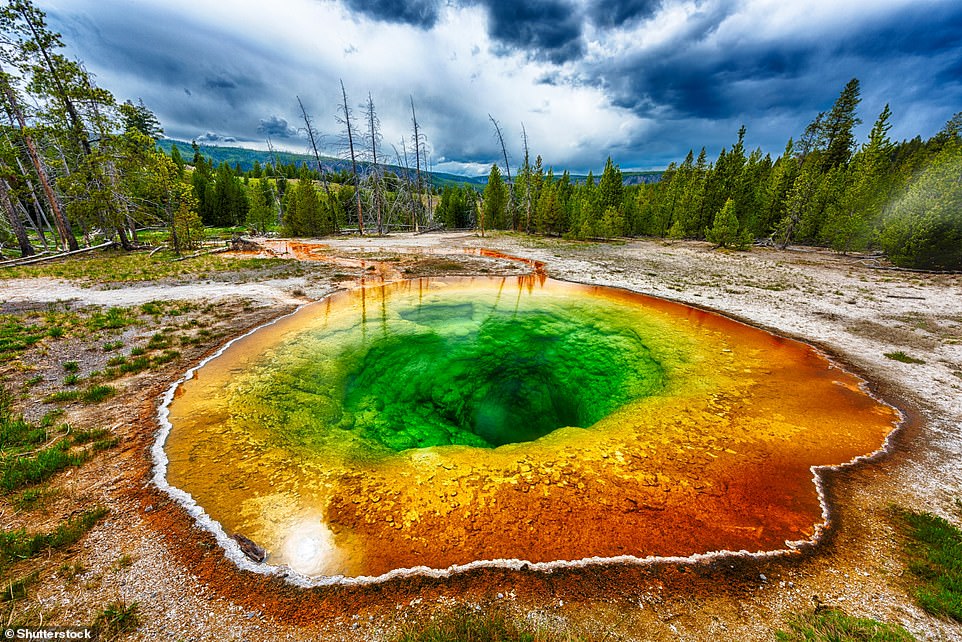 Travel along the Grand Loop Road and take in star sights such as the Morning Glory Pool, pictured

HOW TO PROTECT YOUR 2022 BREAK

It’s a good excuse for a road trip through the Rocky Mountains to explore this 3,500-square mile sanctuary in Wyoming with its geysers, lakes and a thriving wildlife that includes bears, bison and elk (nps.gov/yell).

Tour operators are now selling holidays to this vast desert nation that has six World Heritage sites including Hegra, with remarkably preserved Nabataean ruins, and the 10,000-year-old rock art at Jubbah.

DON’T MISS: Maraya, the world’s largest mirrored building in AlUla and a walk on the lunar-like, 2.5-mile wide Hutaymah crater.

The Japanese capital has more than 200 Michelin-starred restaurants, the most of any city in the world, according to the Michelin Guide Tokyo 2022.

Culinary experiences range from bar-hopping tours to learning how to make noodles and sushi (japan.travel/en). 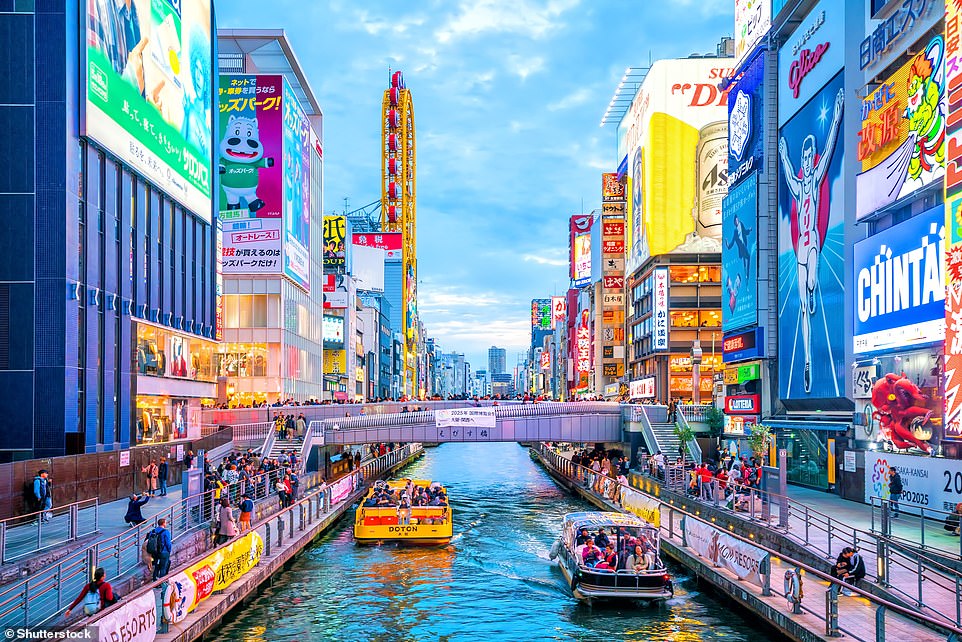 DON’T MISS: Cocktails at the top of a skyscraper. Luxury hotels such as Andaz Tokyo and Ritz-Carlton Tokyo have the best rooftop bars. 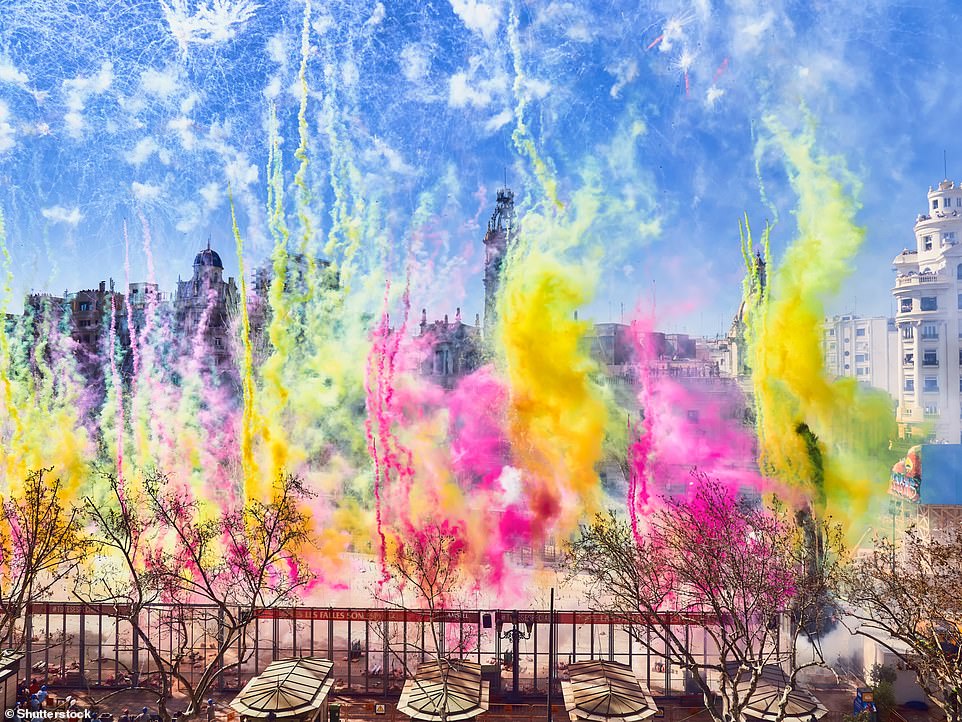 Spain’s third-largest city and the home of paella has been crowned World Design Capital 2022. A year of cultural events will feature concerts, exhibitions and a street festival in September. Las Fallas, its famous fireworks celebrations, is scheduled for March 15-19 (visitvalencia.com).

DON’T MISS: The City of Arts and Sciences, a striking architectural ensemble that includes a planetarium, science museum and the largest aquarium in Europe (cac.es). 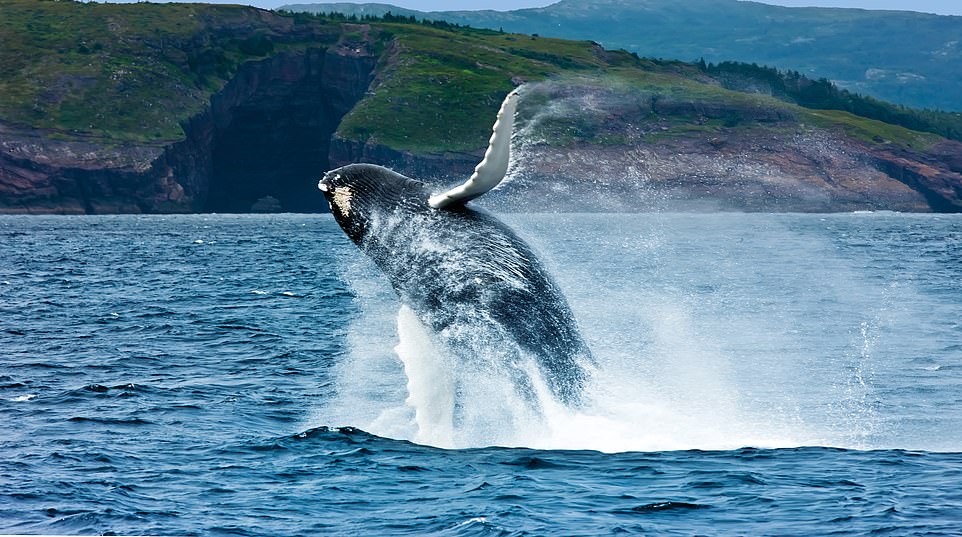 Drive through Newfoundland on a road trip along Canada’s east coast. Pictured is a humpback whale at the Witless Bay Ecological Reserve near Newfoundland 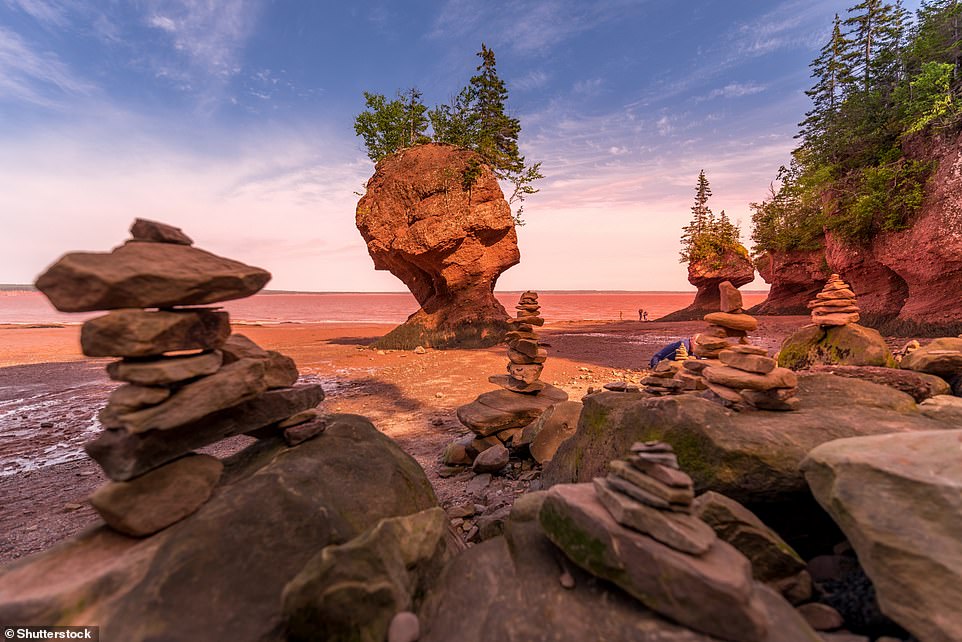 Make sure you explore the Bay of Fundy, pictured above, on the newly extended Fundy Trail Parkway

You can fly to the east coast of Canada in under six hours to enjoy its open spaces, fish restaurants and thrilling outdoor activities. Take a drive through Newfoundland, New Brunswick, Nova Scotia and Prince Edward Island, which have strong links with the UK (atlanticcanadaholiday.co.uk).

DON’T MISS: Make sure you explore the Bay of Fundy, which has the world’s highest tides, on the newly extended Fundy Trail Parkway that hugs 800ft cliffs (fundytrailparkway.com). 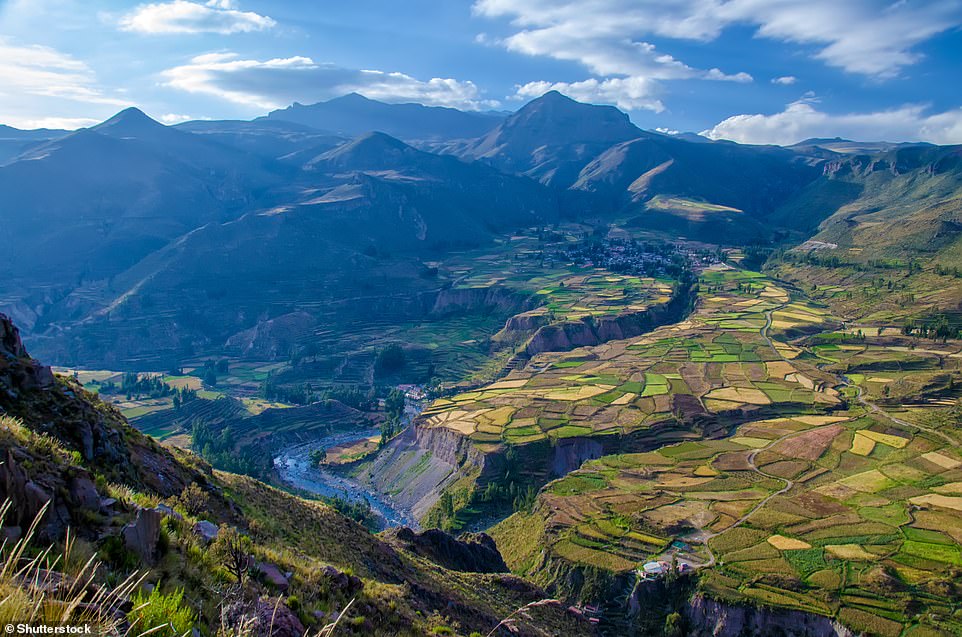 A 15-day Footsteps of the Incas group tour with Titan Travel lets you take in the sights at Colca Canyon, pictured 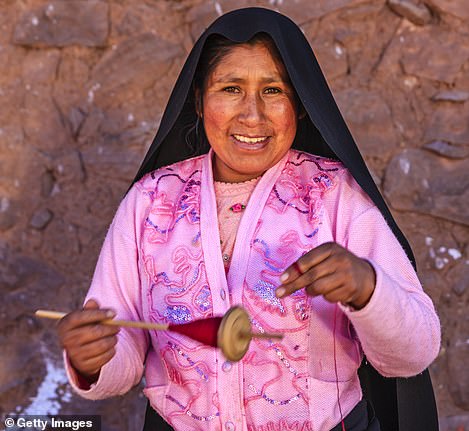 Peru: Get to know more about the country and its people at the ‘Peru: a Journey in Time’ exhibition at the British Museum (file photo)

There’s still time to catch Peru: a Journey in Time, a major exhibition devoted to this vibrant nation at the British Museum until February 20.

The glories of the Inca empire are just the start in a captivating country that has coastal deserts and snow-capped Andean peaks, as well as the Amazon rainforest (peru.travel).

DON’T MISS: Reached via a scenic train ride, the citadel of Machu Picchu is a marvel of Inca engineering that was only discovered in 1911.

BOOK NOW: A 15-day Footsteps of the Incas group tour, which lets you take in the sights of Machu Picchu, Lake Titicaca and Colca Canyon, costs from £3,299pp.

This includes flights, hotels and some meals, as well as plenty of thrilling excursions (titantravel.co.uk). 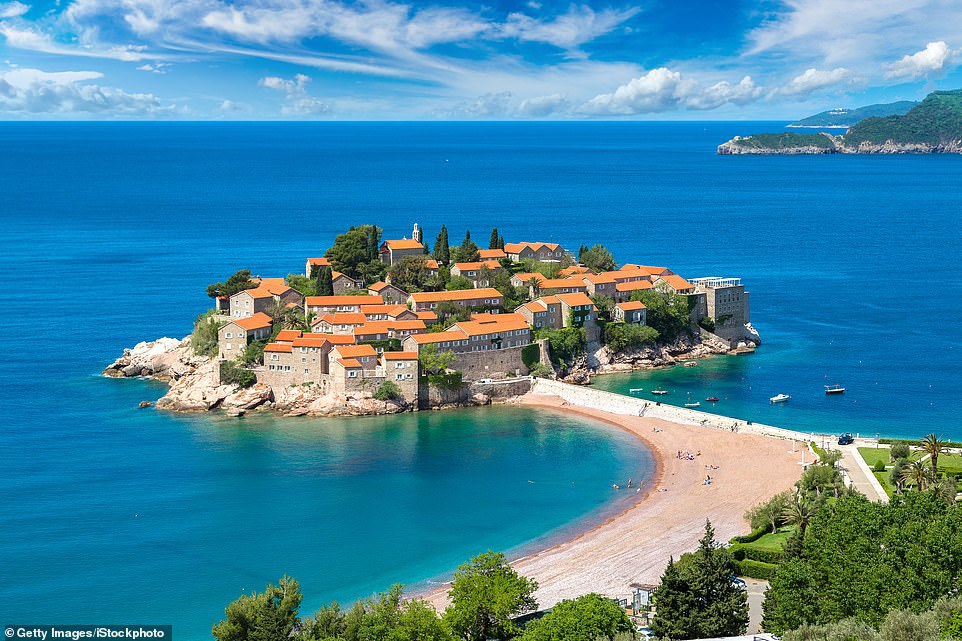 The island of Sveti Stefan in Montenegro. The country’s old towns framed in ancient walls are a Montenegrin specialty

Montenegro is smaller than Yorkshire but packs in 117 beaches, four World Heritage sites, exhilarating mountains and the deepest canyon in Europe.

Less crowded than neighbouring Croatia, it’s growing as a winter sports destination with Swissotel opening a ski resort in Kolasin at the end of the year (montenegro.travel).

DON’T MISS: Seeing the old towns framed in ancient walls, a Montenegrin specialty, with Budva and Kotor the most impressive.

BOOK NOW: EasyJet flights from Manchester to Tivat, from £35 one way (easyjet.com). Palazzo Radomiri is a four-star boutique hotel on the waterfront near Kotor, doubles from £137, B&B (i-escape.com). 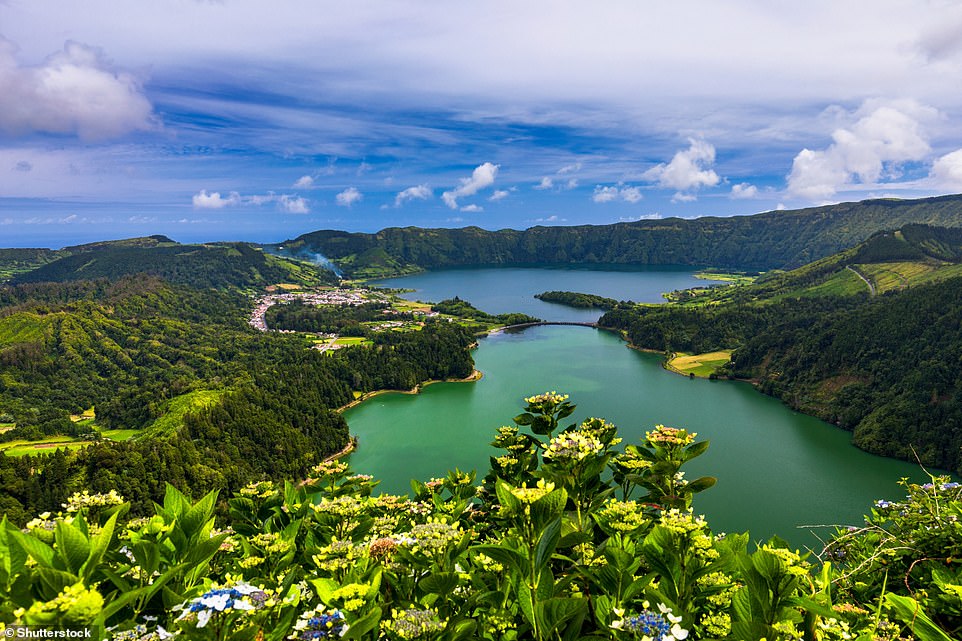 British Airways will launch flights from Heathrow to Sao Miguel, the largest island in this scenic Portuguese archipelago, on July 2.

Highlights include Caldeira das Sete Cidades, a volcanic crater with sheer, 1,000 ft walls, and Ponta Delgada, which was once a prosperous staging post between Europe and the New World (visitazores.com).

DON’T MISS: Parque Terra Nostra, founded in 1775, has 30 acres of mature gardens including the abundant blue hydrangeas that bloom throughout the islands every summer. 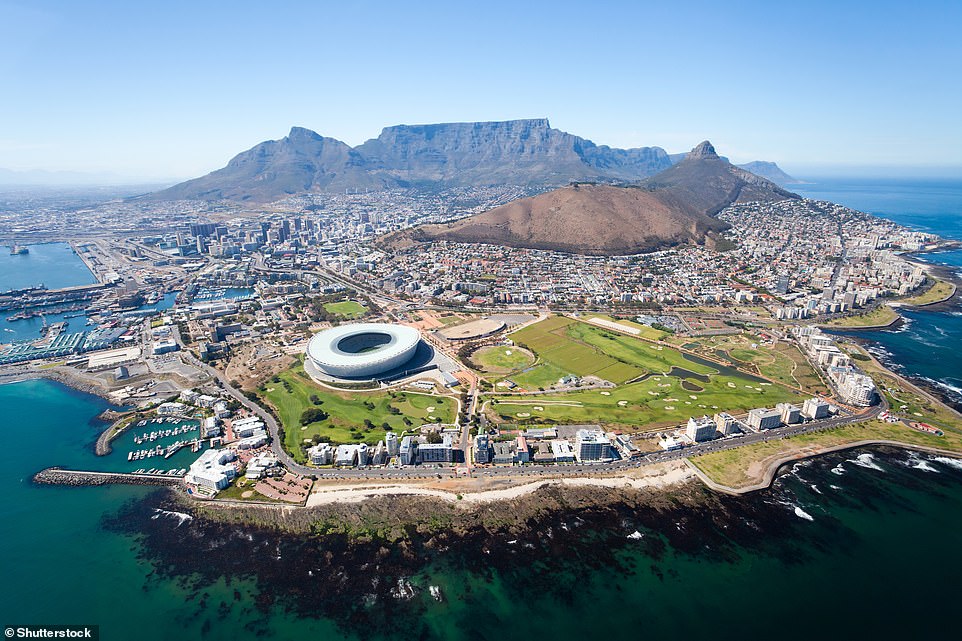 Rent out electric bikes in Cape Town and take a ride above it to the top of Table Mountain, pictured in the centre background 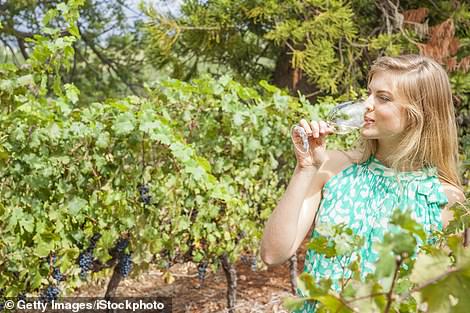 Inspired: South African wine tasting in a vineyard in Stellenbosch

South Africa has plenty of new attractions for 2022, from Sanctuary Mandela in Johannesburg, a former home of the political leader that is now a nine-bedroom boutique hotel, to Africa’s longest zipline near Cape Town, which will stretch for almost two miles.

For something gentler, there are wine walks through the vineyards of Stellenbosch that conclude with a tasting (southafrica.net).

DON’T MISS: Electric bikes have become widely available. In Cape Town, take a ride to the top of Table Mountain and out to Cape of Good Hope (e-biking.co.za).

… AND WHAT’S IN STORE ON THE HIGH SEAS?

Cruise companies are desperate to slip their collective moorings and get back on the high seas.

And there will be no shortage of options during 2022, whether it’s watching the Fifa World Cup in Qatar, kayaking among icebergs or enjoying the thrills and spills on board the latest megaships, with their roller coasters, super-slides and aquaparks.

It’s also access all areas on classic cruises with passengers ready to splash out on innovative land programmes to join safaris and visit world-class wineries. There has never been a wider choice. 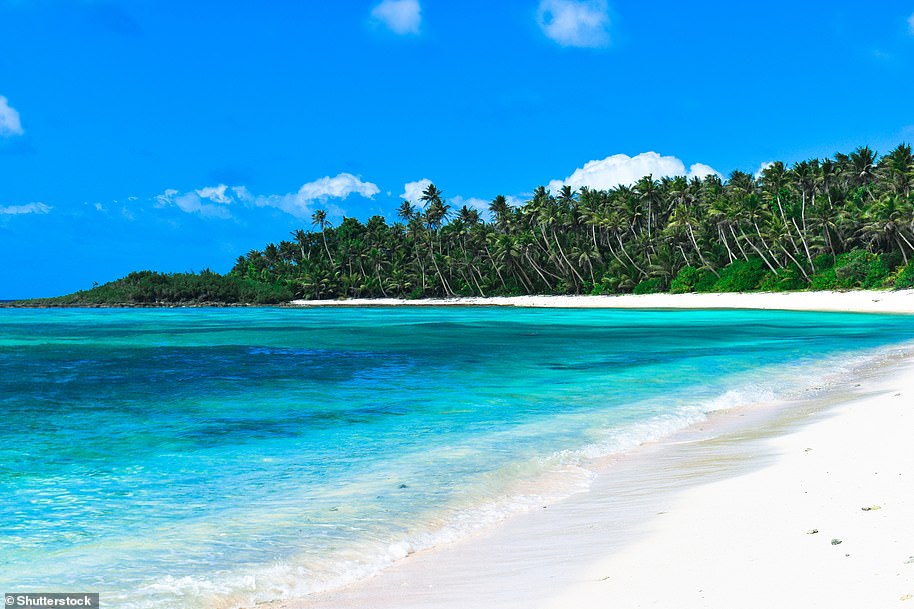 Sail on new ship Minerva from historic Otaru, on Hokkaido, Japan’s northern island, to the subtropical island of Chichijima before exploring Pacific Ocean idylls such as Guam, first discovered 500 years ago by Portuguese navigator Ferdinand Magellan. 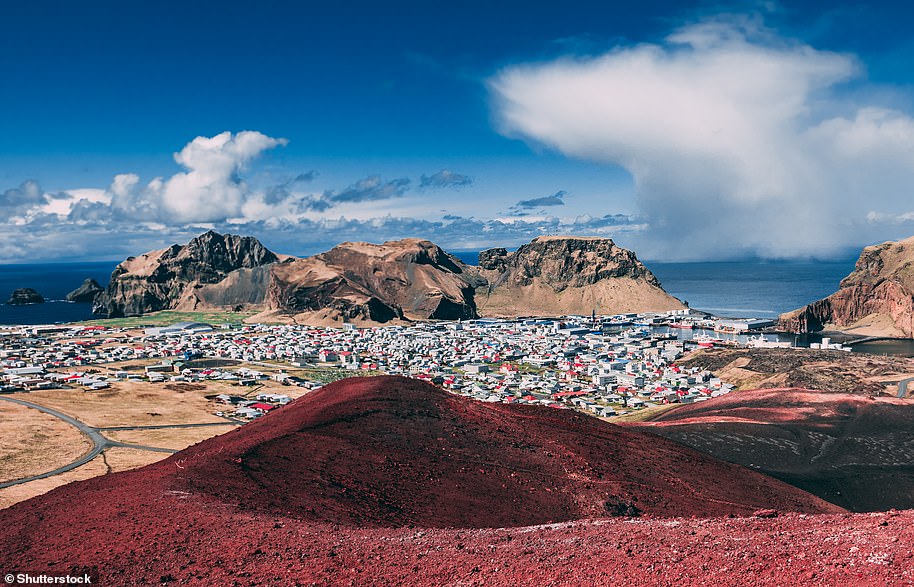 Hurtigruten Expeditions continue to create new itineraries such as MS Fridtjof Nansen’s circumnavigation of Iceland with calls including Heimaey, where puffins nest. 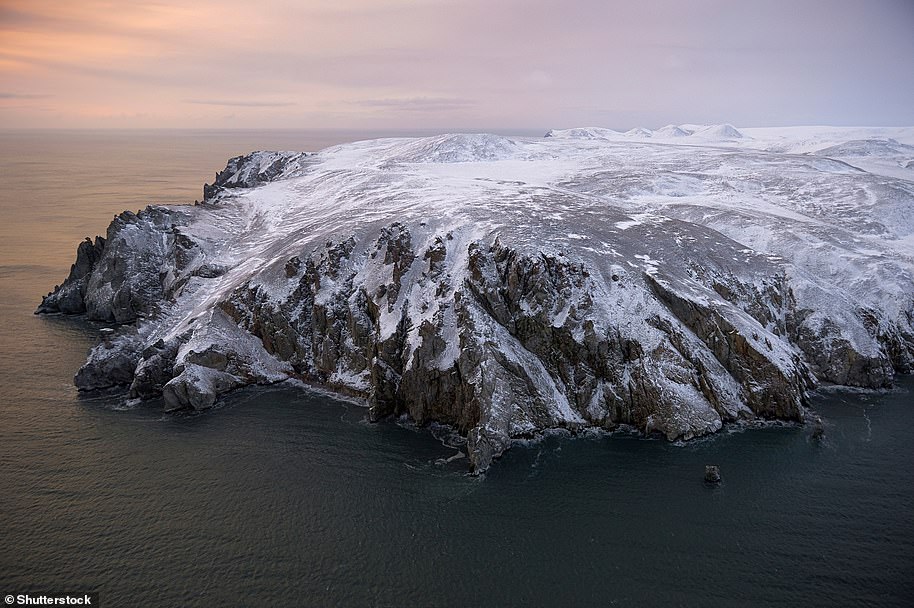 FUN IN THE RED SEA 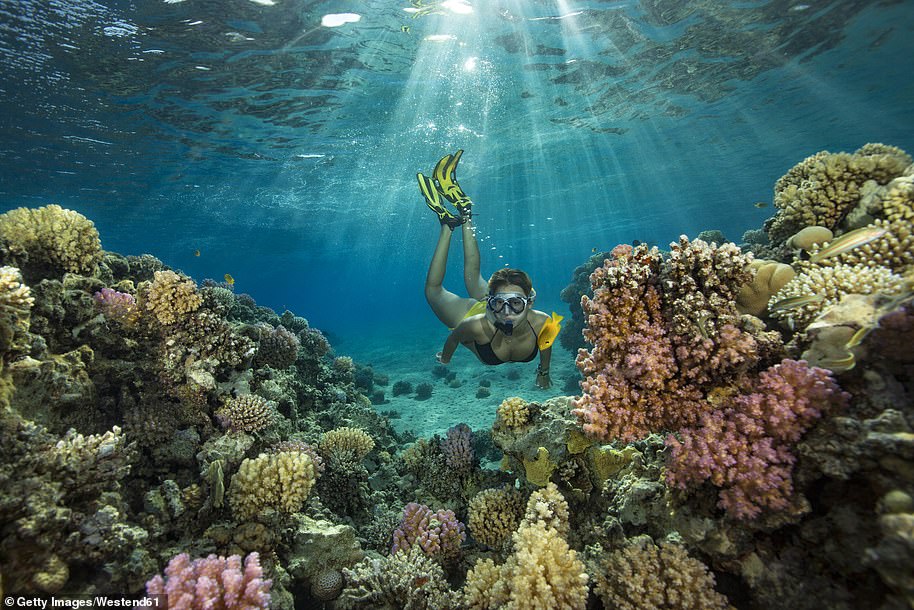 Riot of colour: A snorkeller at a coral reef in the Red Sea. The eight-day The Best of the Red Sea cruise with Emerald Waterways departs on March 11 (file photo)

Snorkel, go paddleboarding and try kayaking from superyacht Emerald Azzurra’s marina during the 100-guest ship’s inaugural sailing The Best of the Red Sea. 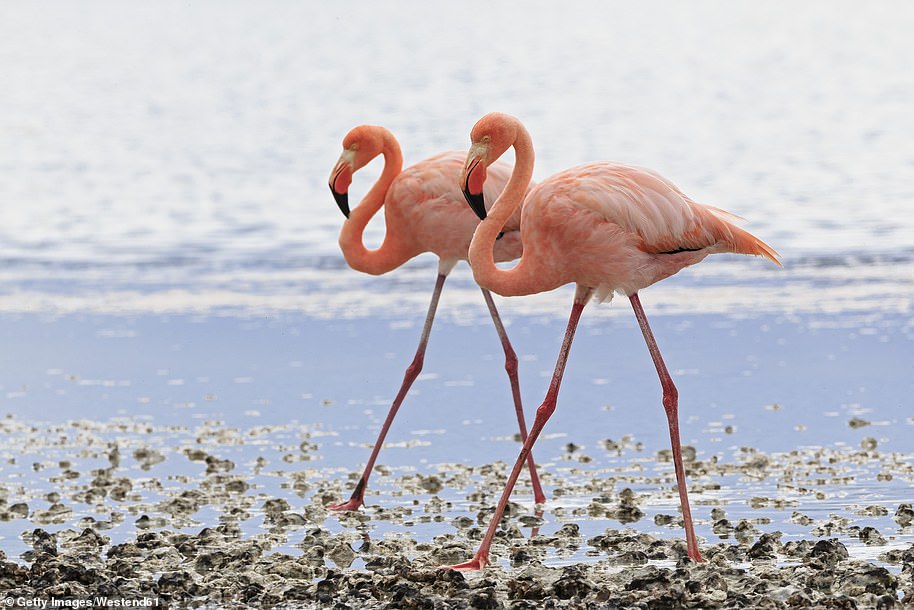 Flamingos on the Galapagos Islands. Visit the isles on a seven-night tour with Aqua Expeditions

Superyacht Aqua Mare sets sail in the Galapagos Islands on seven and 14-night itineraries from May 6 with 16 crew attending up to 16 guests. Two rib tenders make twice-daily expeditions from the four-deck ship. 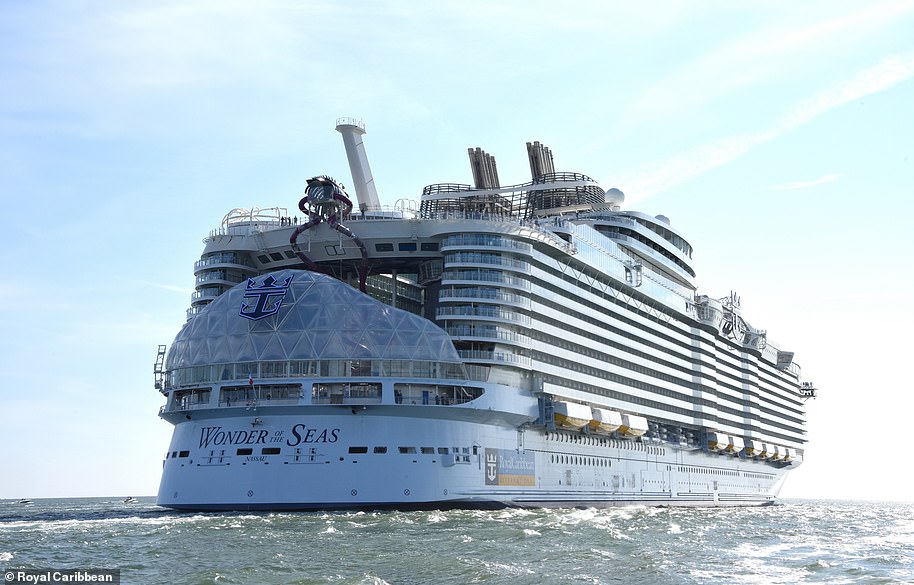 Guests aboard Royal Caribbean’s 5,734-passenger Wonder of the Seas, pictured, can choose from 19 swimming pools

Choose from 19 pools and Ultimate Abyss, the tallest slide at sea, on Royal Caribbean’s 5,734-passenger Wonder Of The Seas, launching in March.

Children can hang out with Captain Mickey and Minnie on Disney Wish but this new ship also has adults-only bars, lounges and a pool area for relaxation while children play in mini clubs. 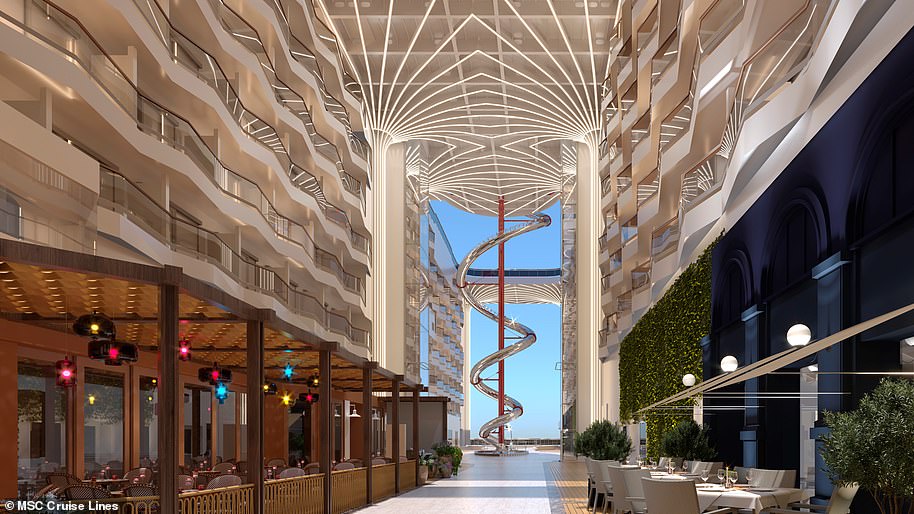 A rendering of the Spiral, a slide that spans 11 decks of the MSC World Europa cruise liner

It’s going to be great fun sliding 11 decks from the top to the promenade on MSC World Europa’s Spiral to reach great restaurants and the Masters Of The Sea pub which brews and serves craft beer.

Book it: Seven-night cruise from Dubai departs on December 24. Fly-cruise from £1,749 pp or Christmas cruise for only £849.

Silver Spirit moors in Doha for three days during the Fifa Qatar World Cup 2022. Fans can head to a match and check out the futuristic 80,000-seat Lausail Stadium, designed to represent the sails of a traditional dhow boat by British architects Foster + Partners. 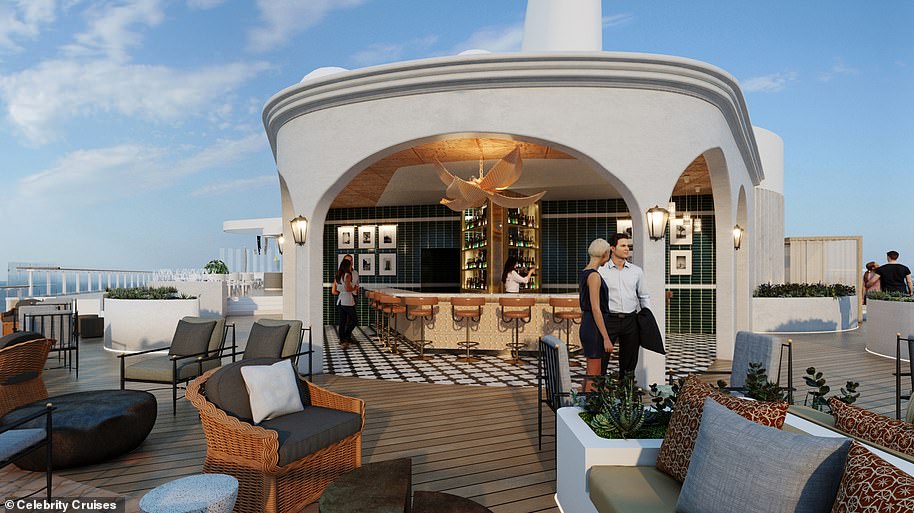 This rendering shows the smart decor of Norwegian’s 3,215-passenger cruise ship Prima, which launches this summer

Savour sea views when 3,215-passenger Norwegian Prima launches this summer with an infinity pool on each side.

Wellness is a priority on Celebrity Beyond with experiences and products from Goop founder Gwyneth Paltrow, the brand’s well-being adviser. The ship’s 30 restaurants include Le Voyage, Michelin-starred chef Daniel Boulud’s debut restaurant at sea.