The diversity of South America’s landscapes is perhaps the greatest of any continent.

It’s hard to fathom that both the driest hot desert in the world, the Atacama in Chile, and our planet’s most biodiverse region, the Amazon rainforest, can be found within the same landmass.

The latter forms part of the Andes, the world’s longest continuous mountain range, which winds its way through seven countries and has a mythical appeal for many.

And while the continent may be home to 422.5 million people, there are vast areas where you could find yourself completely alone and shrouded in stillness.

Scroll down for stunning images of our pick of South America’s most striking scenery, from mighty waterfalls to dramatic volcanoes and dreamy islands. Ready your jaw for plummeting… 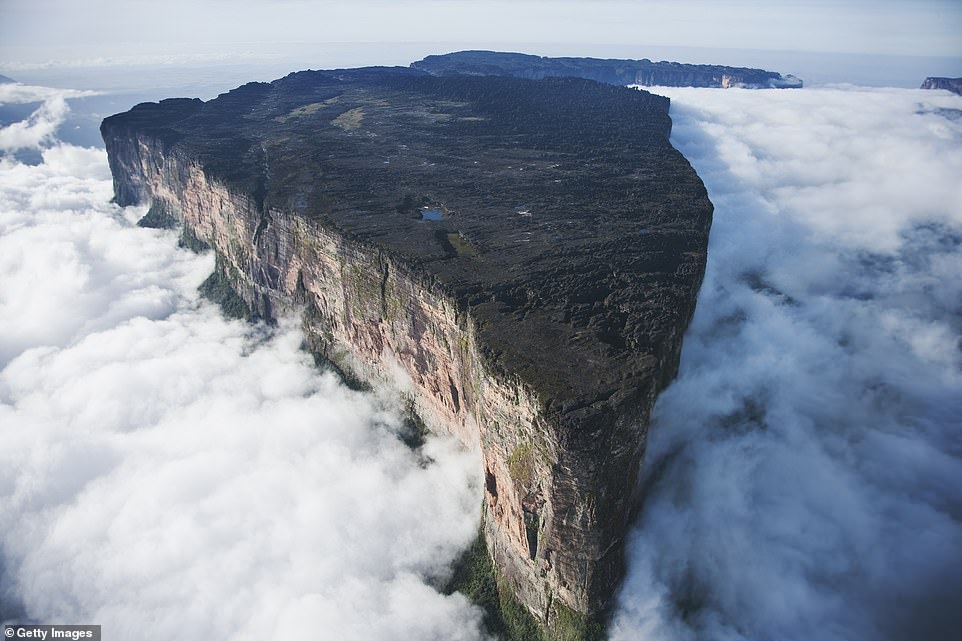 Behold Mount Roraima – one of the most extraordinary, most mystical places on earth. At 9,219ft (2,810m), it’s the highest table-top mountain in the world, and it forms a ‘triple border’ point between Venezuela, Brazil and Guyana. Most of the plants found there are carnivorous, according to mountroraima.net, and constant rain results in waterfalls ‘popping up all over the place’. You won’t be surprised to hear that it inspired Sir Arthur Conan Doyle’s 1912 book The Lost World. Want to visit? Get ready for a three-day hike… 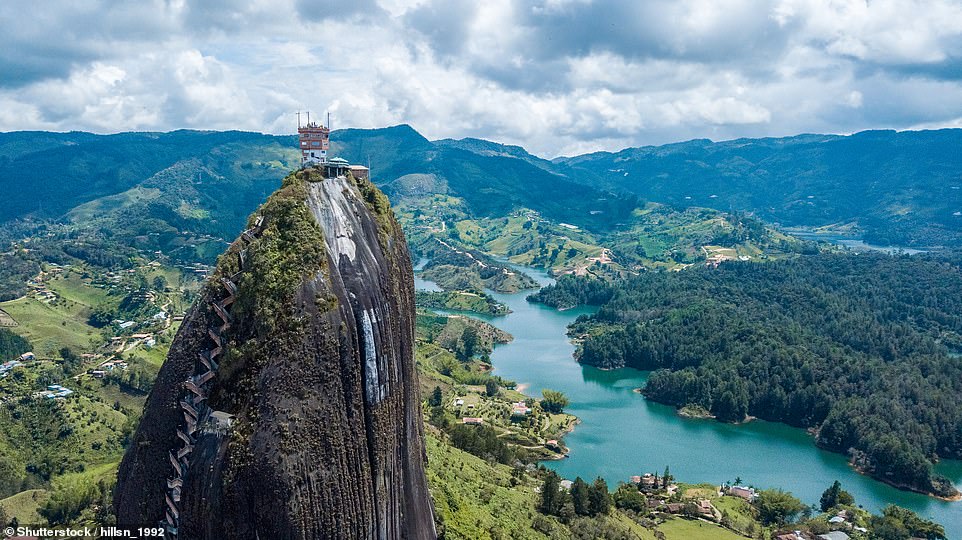 It’s certainly not boulder dash. There really is a staircase in the crack of a 650ft rock in Colombia – and the views from the top are incredible, if you’re fit enough to endure the 650 steps up there. They have been wedged into a huge crevice in the 10-million-ton El Peñon de Guatape rock in Colombia, and mean the rock has become a bizarre look-out post across a mesmerising landscape 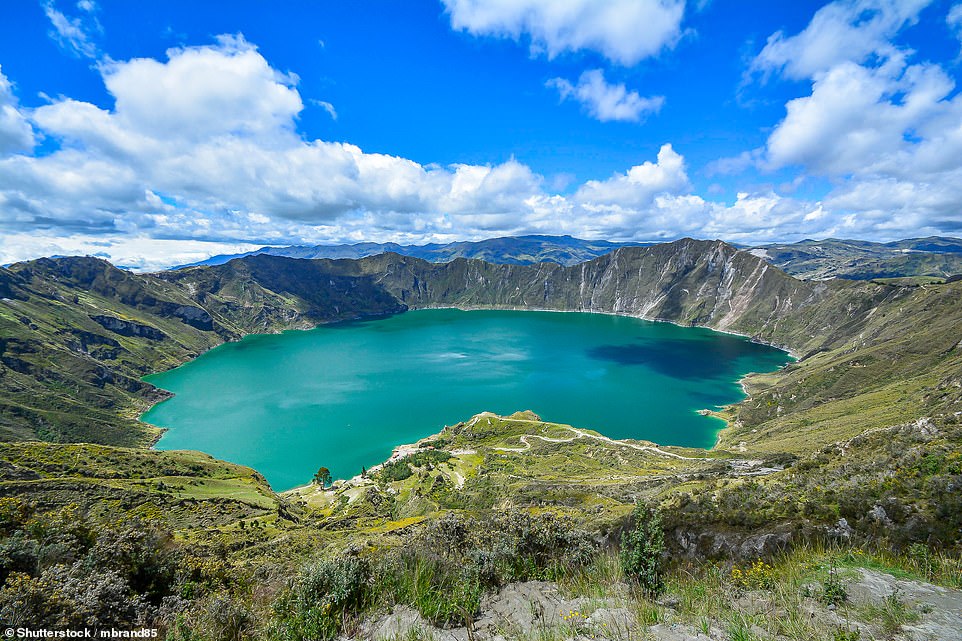 The dazzlingly turquoise Quilotoa Lake sits at a dizzying elevation of 13,123ft in the Ecuadorian Andes in the three-kilometre-wide (1.86 miles) caldera of the Quilotoa volcano. It was formed following an eruption about 600 years ago. Fancy visiting? There are regular buses to it from nearby Latacunga 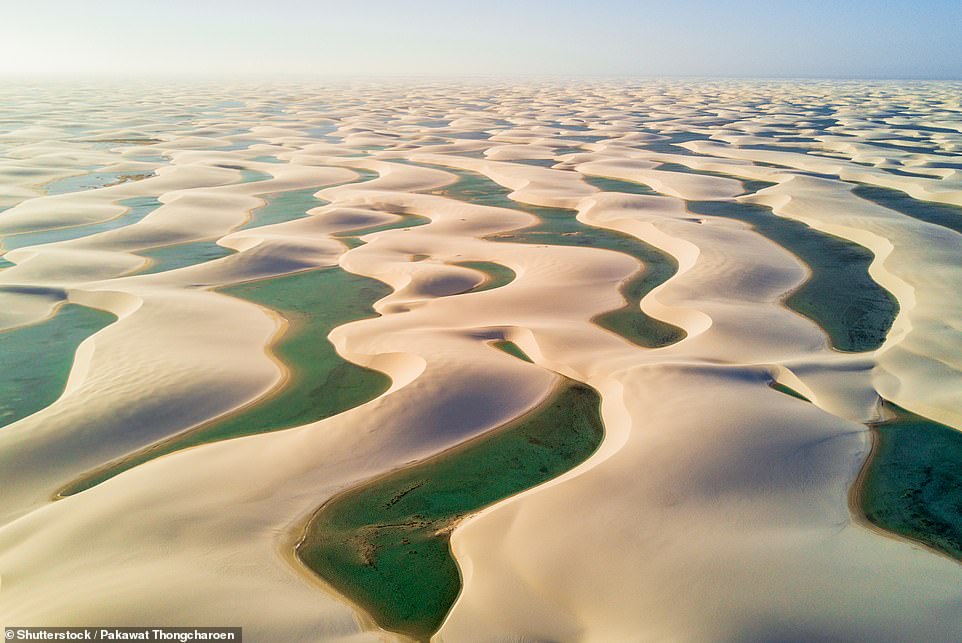 Lençóis Maranhenses National Park on Brazil’s north Atlantic coast is known for its vast desert landscape of undulating, white sand dunes and clear rainwater lagoons. The optimal time to visit is between June and September when the lakes are full and the sun isn’t too strong 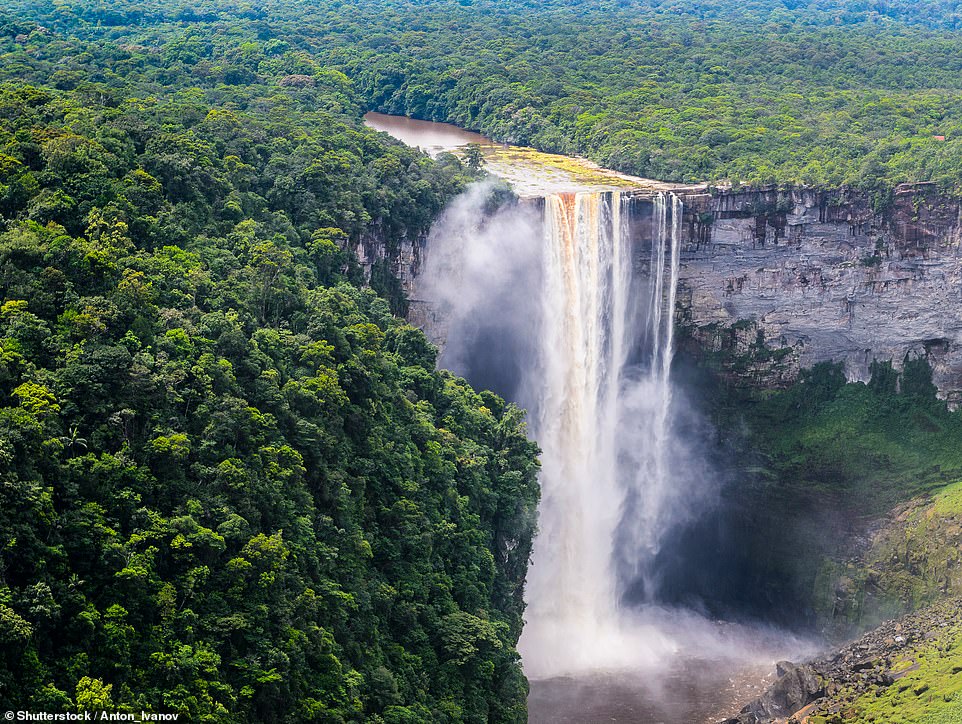 This is the first of several pictures of epic South American waterfalls in this collection. The above image shows the majestic Kaieteur Falls, where the Potaro River plunges off a 741ft cliff in Guyana’s Kaieteur National Park in rather dramatic fashion. It is the world’s largest single-drop waterfall by water volume – 23,000 cubic feet of water plummets every second. The falls were discovered in 1870 by British explorer Charles Brown 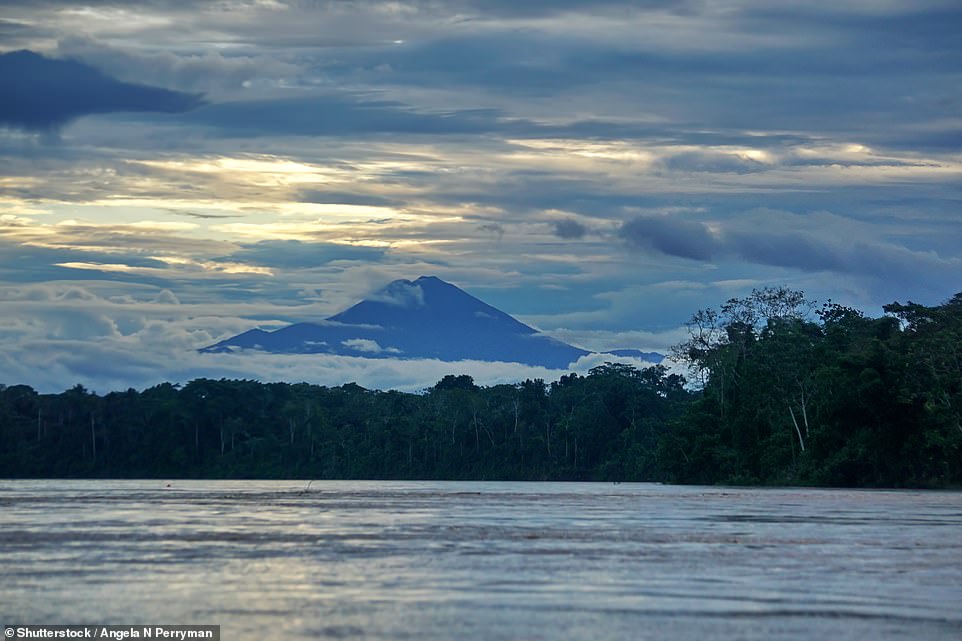 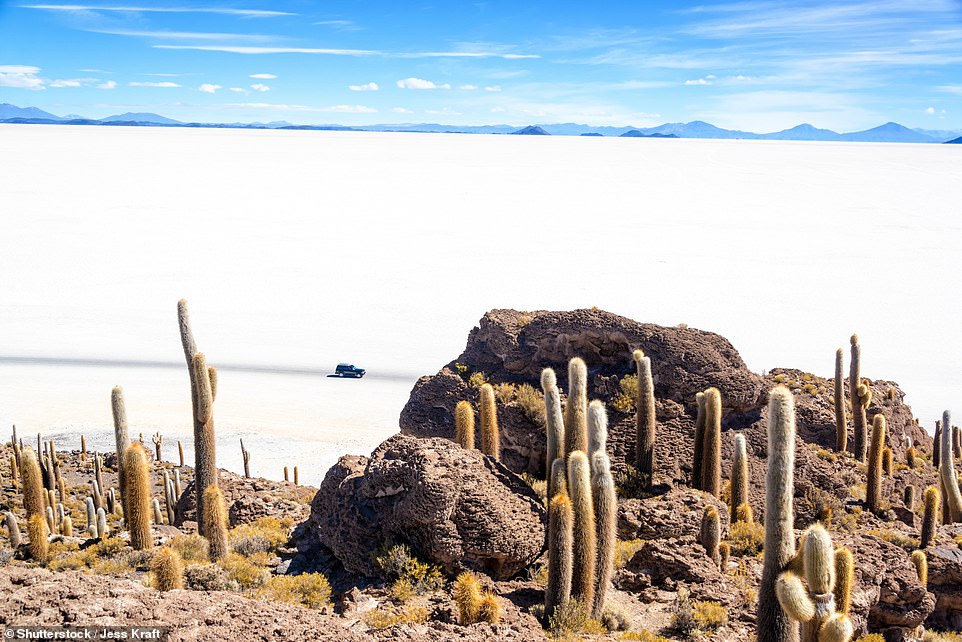 An amazing shot of the world’s largest salt flat, Salar de Uyuni, in Bolivia, as seen from the cacti-covered Isla Incahuasi, a rocky outcrop of land and former island in what used to be a large lake before it dried out many millennia ago. The salt flat lies at an elevation of 12,000ft and covers almost 12,000 square kilometres (4,633 square miles) 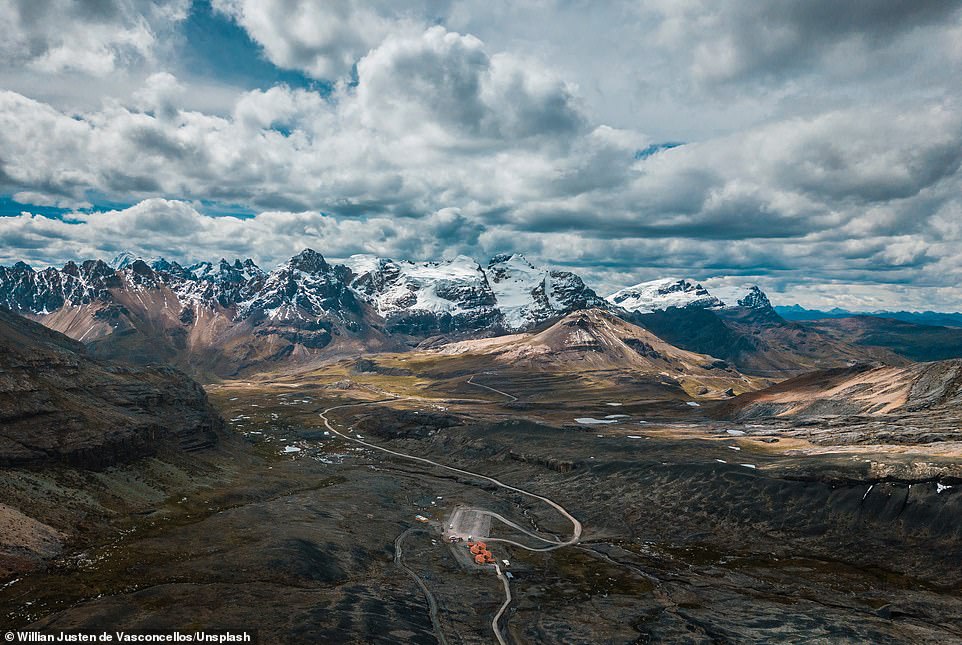 An amazing photograph taken in Peru’s Huascarán National Park, which comprises most of the mountain range known as Cordillera Blanca – the world’s highest tropical mountain range. It has peaks at elevations up to 22,000ft 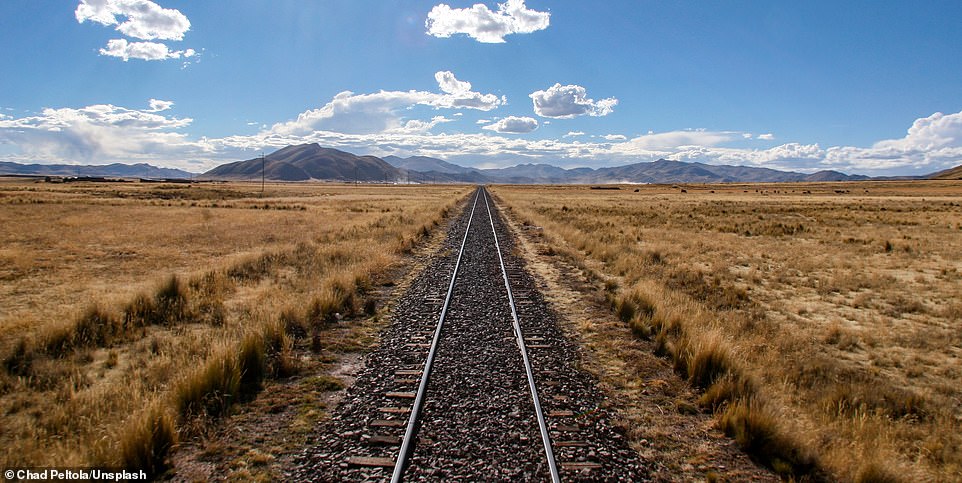 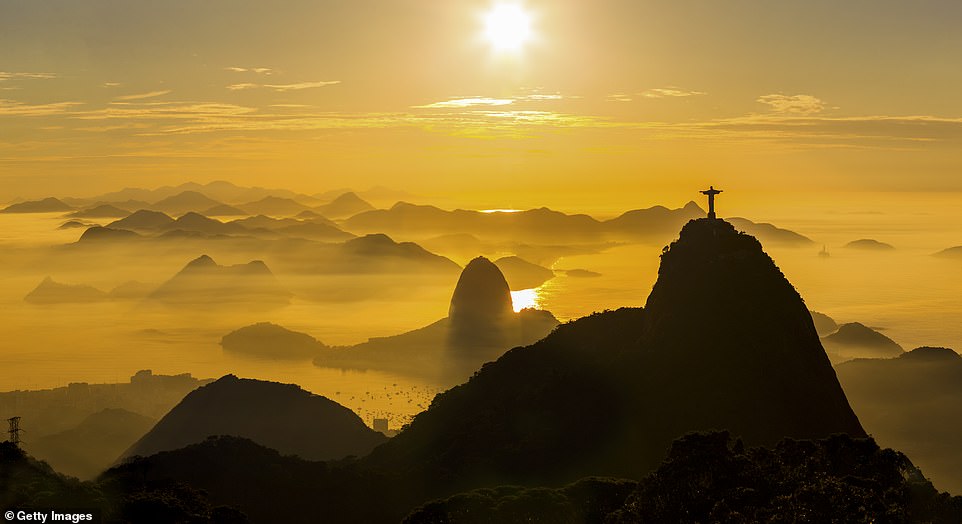 Rio de Janeiro, captured at sunrise in a glorious image, with Sugarloaf Mountain guarding the mouth of Guanabara Bay and the 124ft Art Deco Christ the Redeemer statue watching proceedings from the top of 2,329ft-tall Corcovado mountain 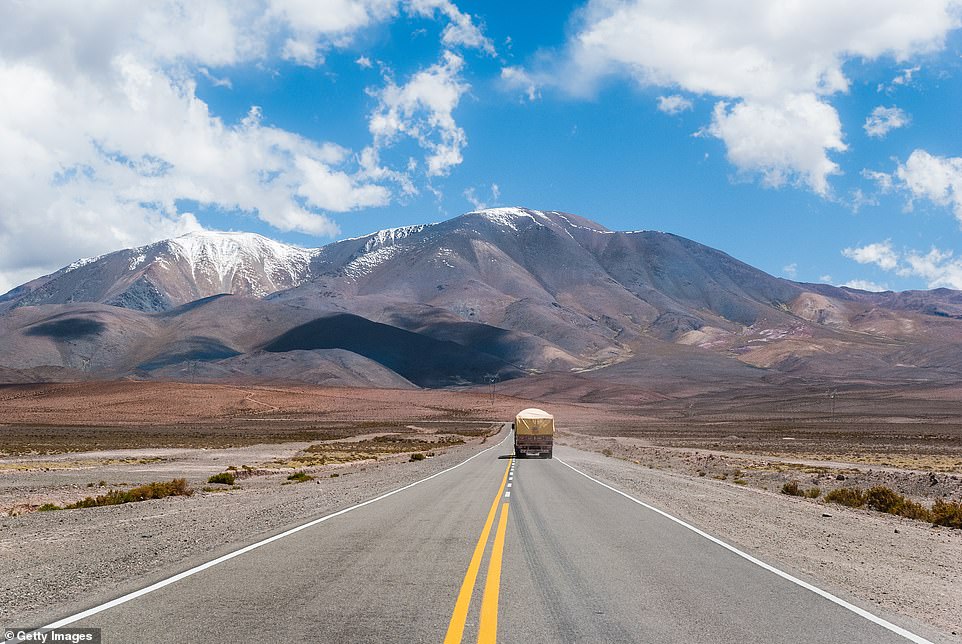 Nevado de Acay is a 5,950m-high (19,521ft) mountain in the Salta province of Argentina and the site of an Inka mountain sanctuary. The ‘Ruta 40’ that runs parallel with the Andres and makes for a classic road trip passes close to it 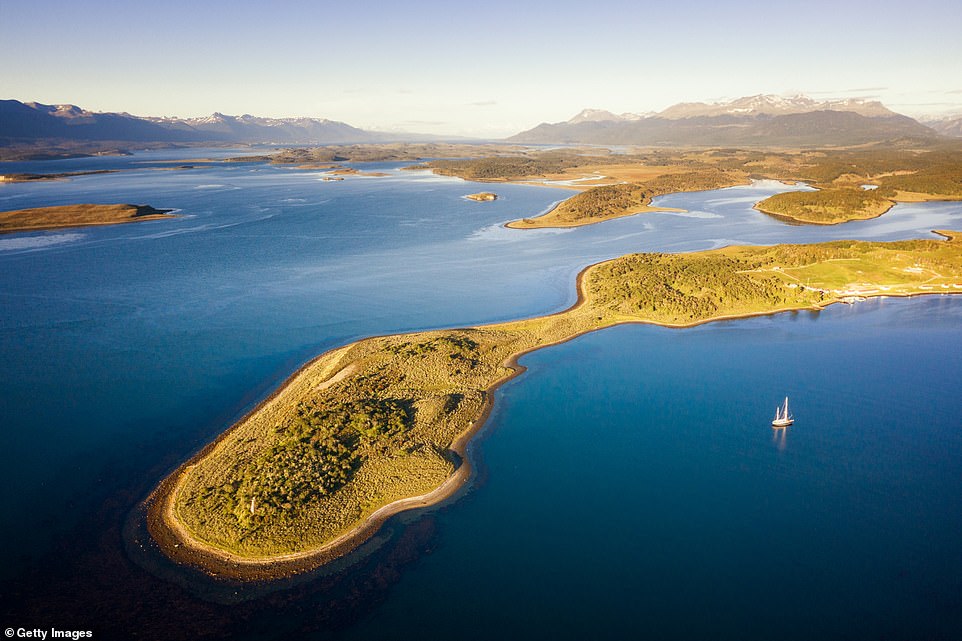 The 150-mile-long Beagle Channel, in the Tierra del Fuego archipelago between Chile and Argentina, was named after the ship HMS Beagle during its first hydrographic survey of the coasts of the southern part of South America, which lasted from 1826 to 1830. A young Charles Darwin joined the second expedition in 1933 and wrote of the region’s beauty 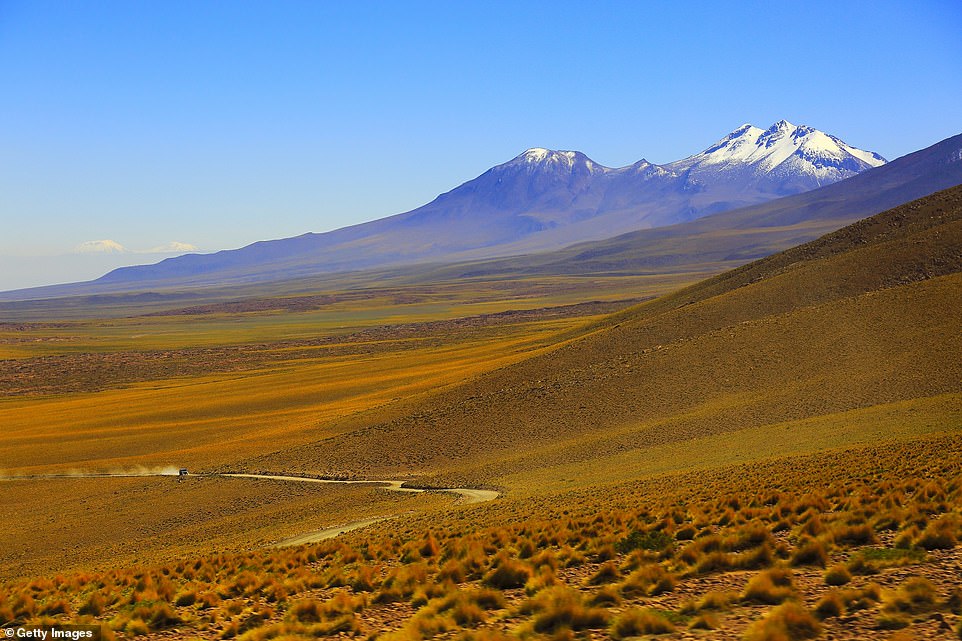 A car makes its way through the Atacama Desert beneath the highly active 18,300ft Lascar Volcano. The Altiplano is a broad Andean plateau on Chile’s northern frontier with an undulating altitude of between 3,500 (11,480ft) and 4,500 metres (14,760ft) 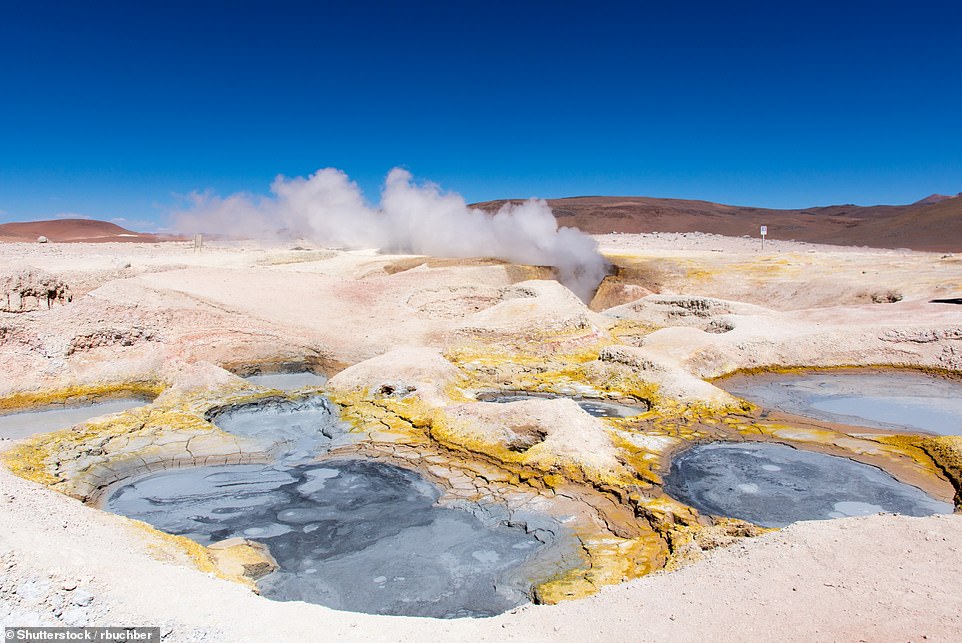 This is the otherworldly Sol de Manana near the Salar de Uyuni salt flat, a huge field of bubbling mud pools and hot steam geysers, which can erupt to heights of 50ft. It sits at an elevation of 15,900ft 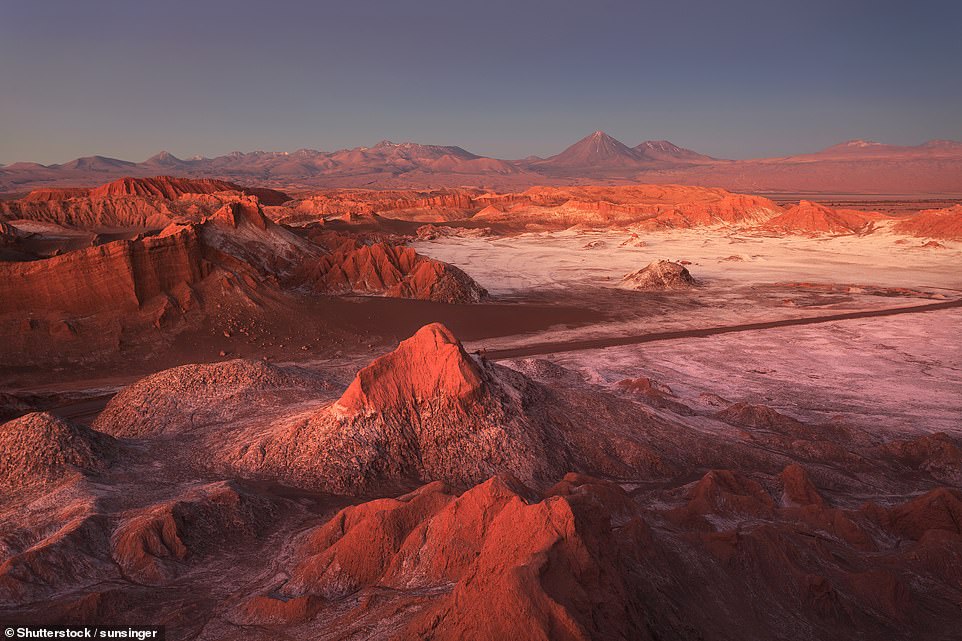 The beautiful Valle de la Luna – or Valley of the Moon – in Chile is so named because, as you can see, it has a rather lunar-like appearance. It lies near the town of San Pedro de Atacama 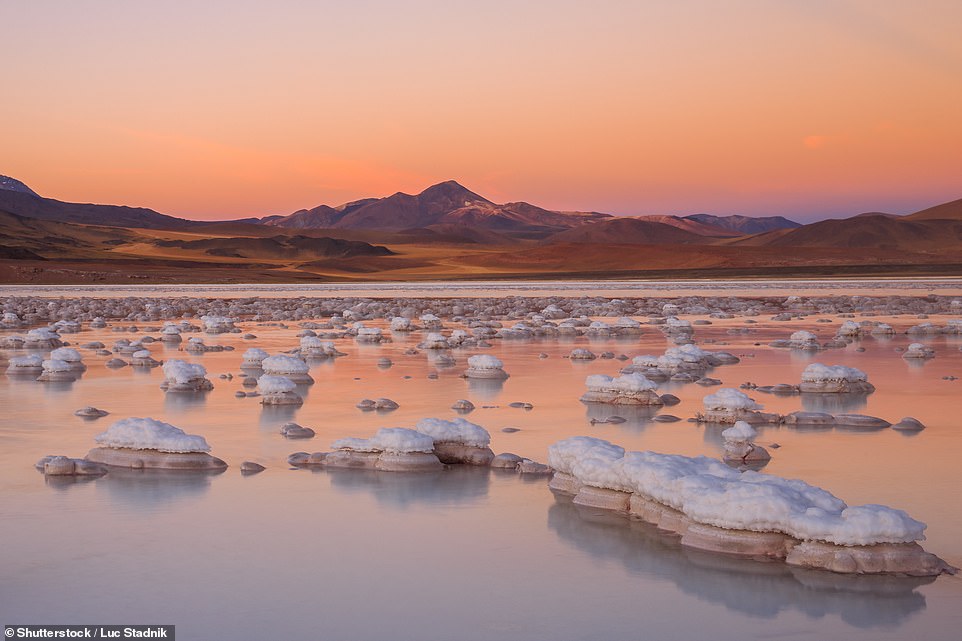 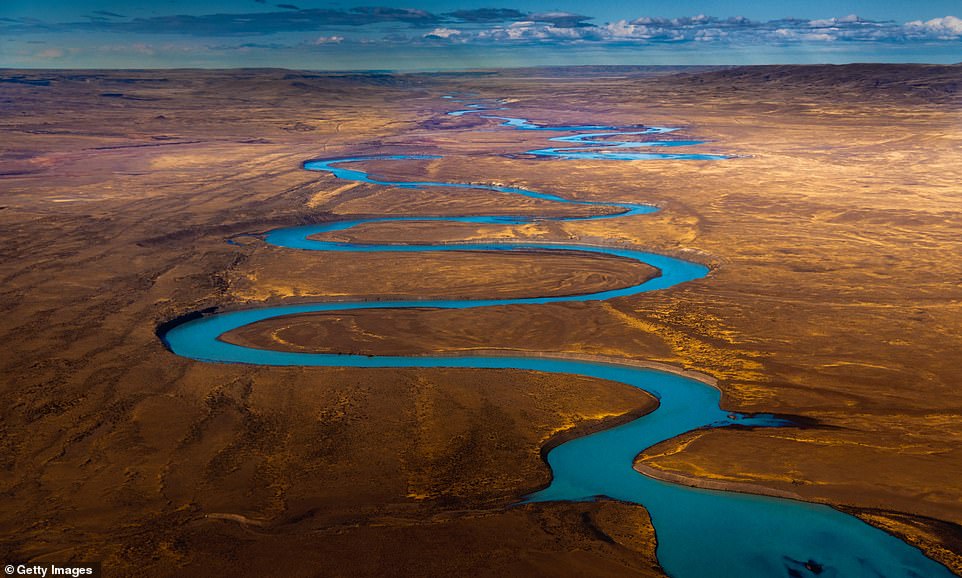 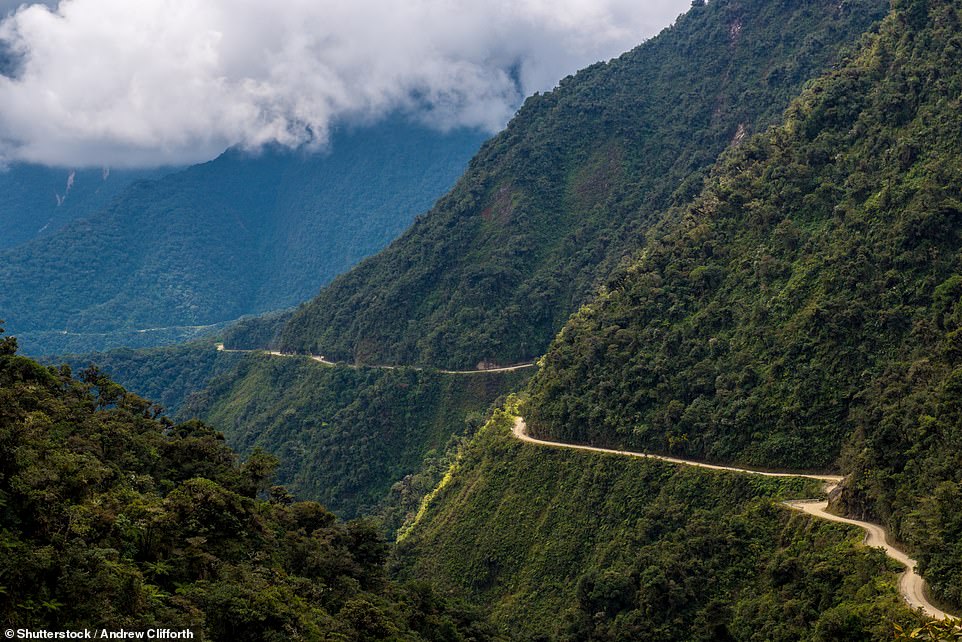 This is the North Yungas Road from La Paz to Coroico in Bolivia. Looks like a lovely drive doesn’t it? And it is, as long as you’re very careful indeed. The 37-mile stretch is also known as ‘Death Road’ – and has a reputation of being one of the most dangerous in the world, thanks to being very narrow and a distinct lack of barrier protection from cliff-edge drops 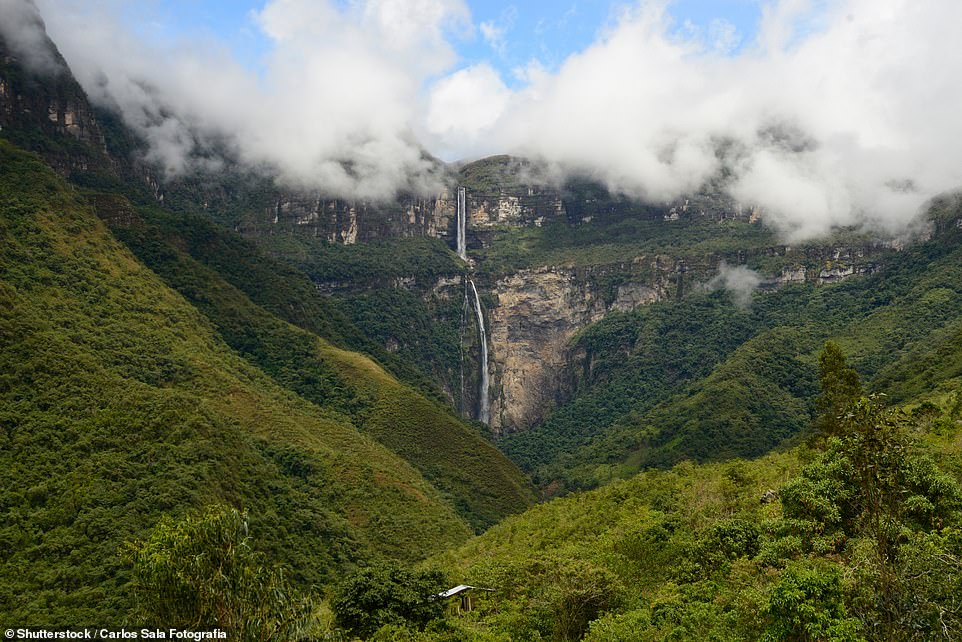 Gocta is an amazing 2,529ft-tall waterfall in the Peruvian province of Chachapoyas in the Amazon that has two drops 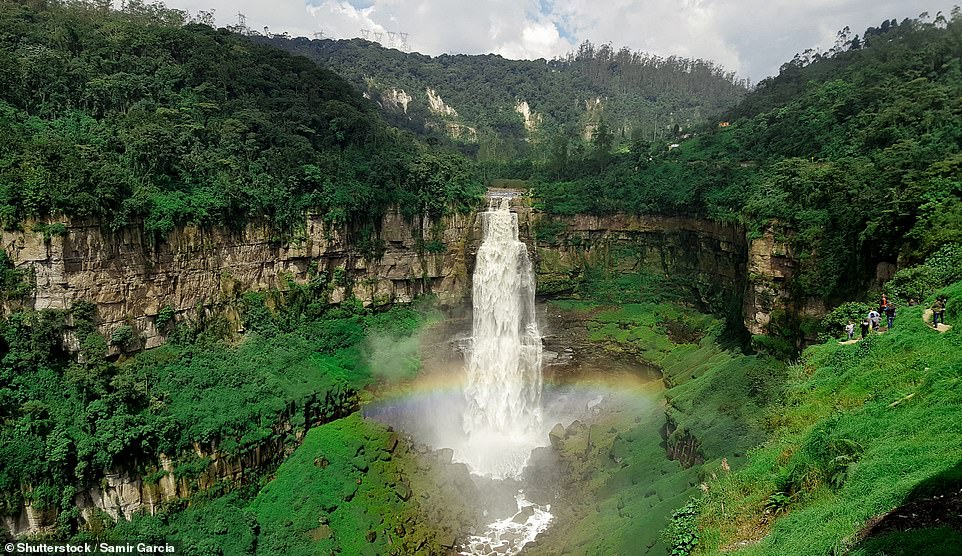 The Tequendama Falls, 20 miles southwest of Bogota, is one of Colombia’s main tourist attractions. Visitors are drawn by the sight of water gushing down a 433ft-tall cliff face amid verdant foliage 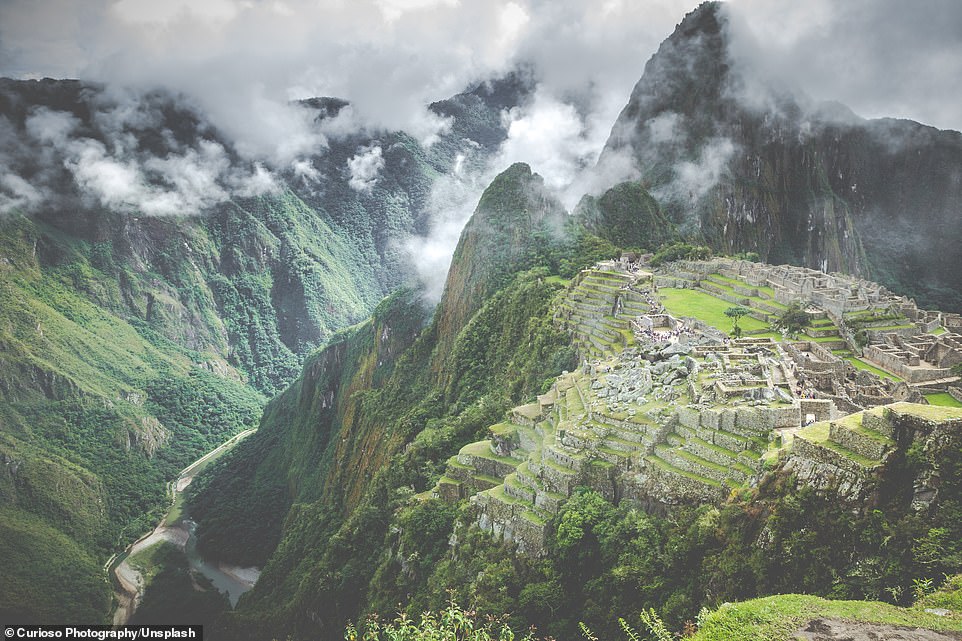 Machu Picchu needs no introduction – it’s one of the world’s most famous ruins. Half a million visitors a year are drawn to the 15th-century Inca citadel, despite its remote location 2,430 metres (7,972ft) up in the Peruvian Andes 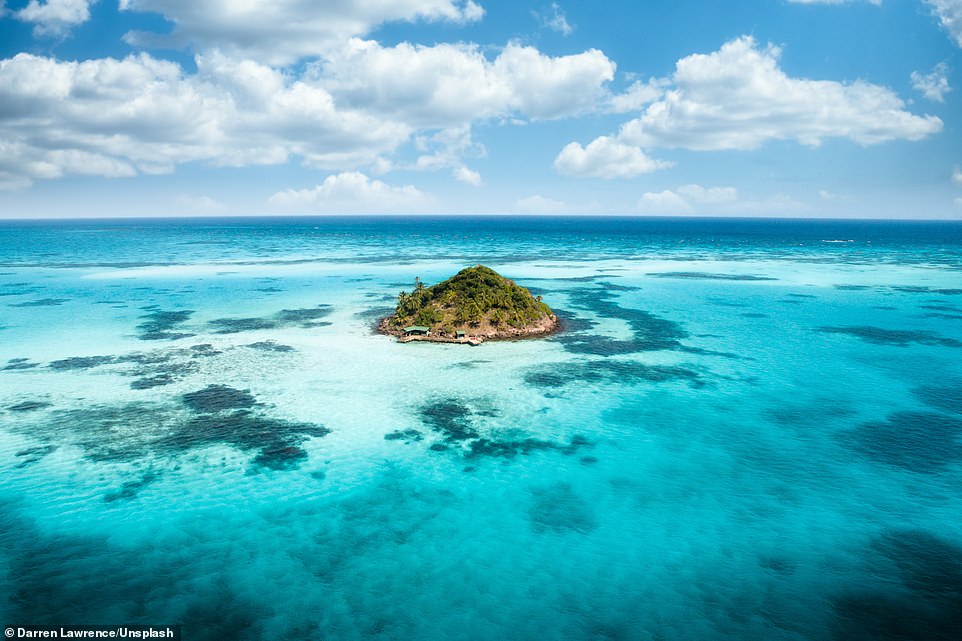 When you think of a tropical paradise, do you think of Colombia? No, we don’t either. But that may change thanks to this amazing image of Cayo Cangrejo, a stunning little island in Old Providence McBean Lagoon National Natural Park. It has a couple of bars and the snorkelling opportunities are enticing, to say the least 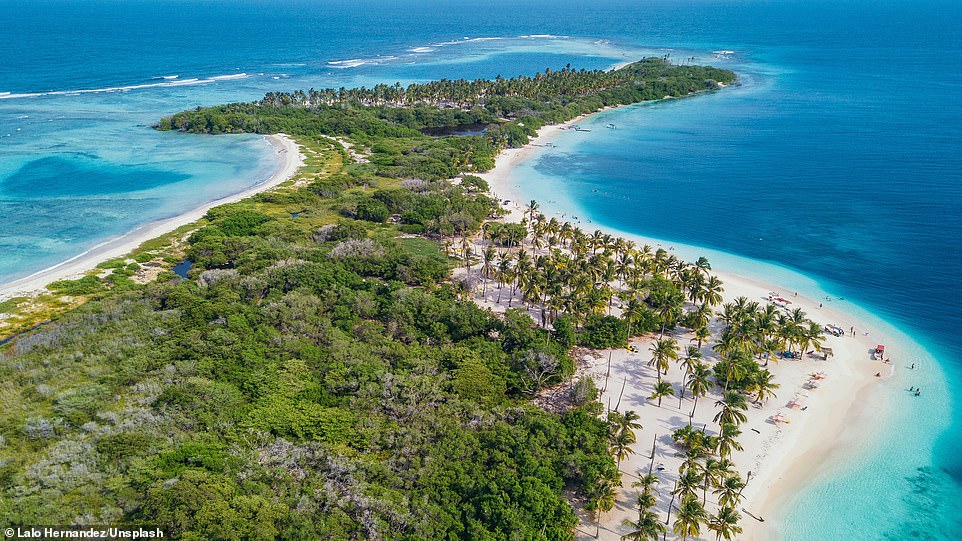 Water joy: The stunning Morrocoy National Park on the Caribbean coast of Venezuela 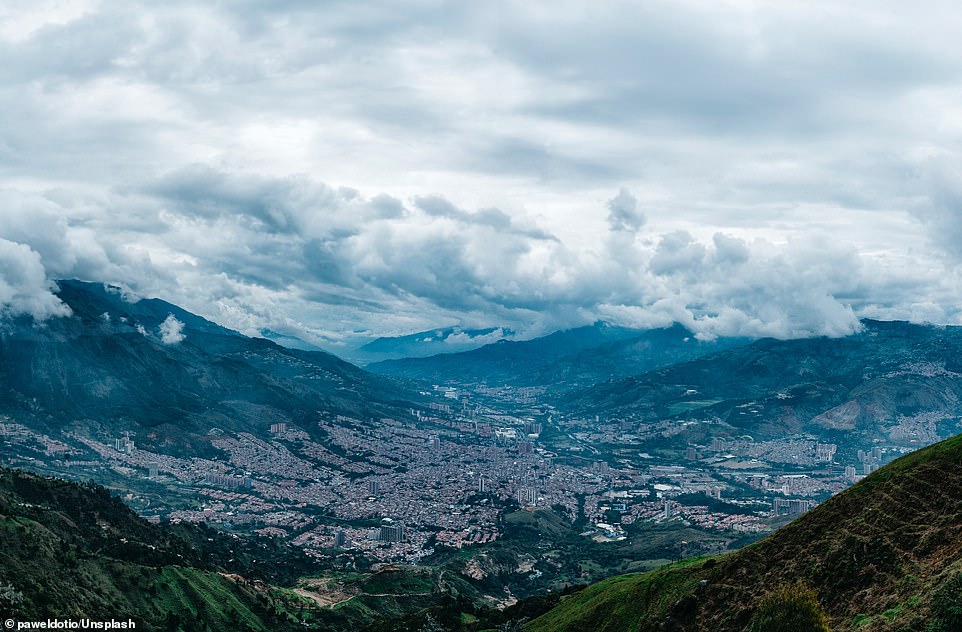 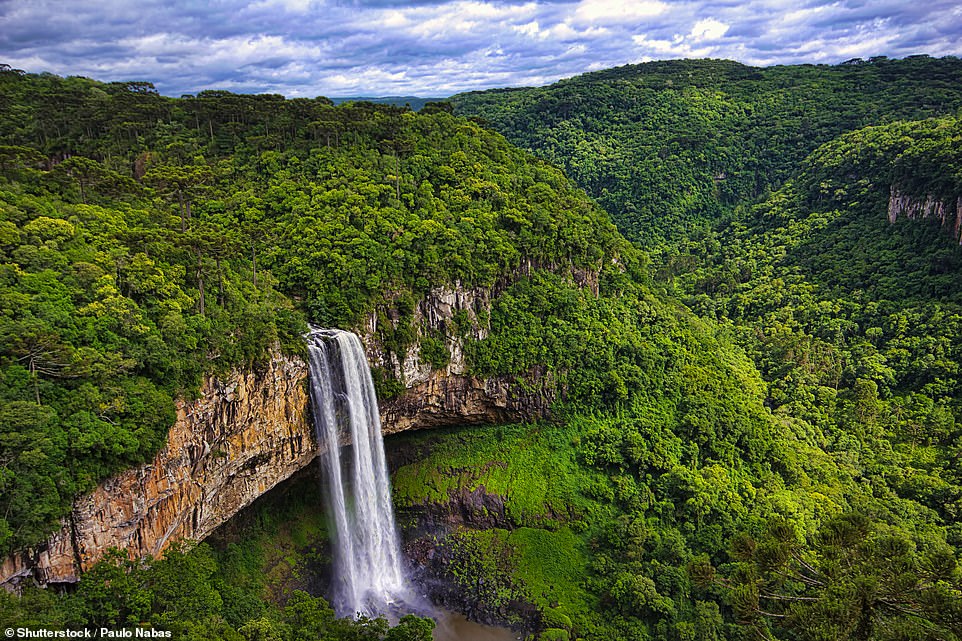 Yes, another waterfall, but can you blame us? This one is called Caracol Falls and cascades 426ft off cliffs in Brazil’s Caracol State Park 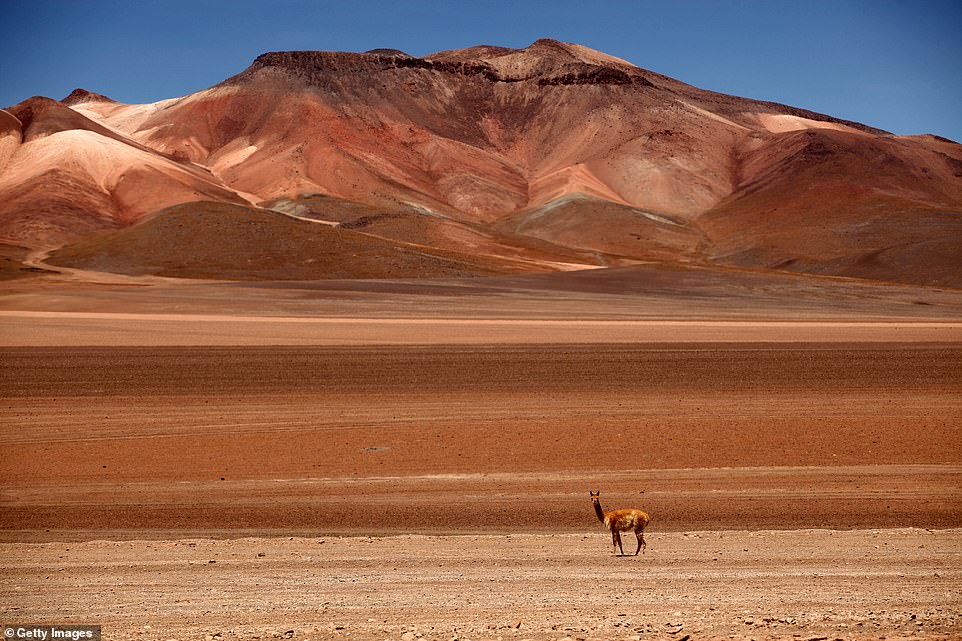 In the high alpine areas of the Andes wander vicunas, a relative of the llama and a wild ancestor of domesticated alpacas 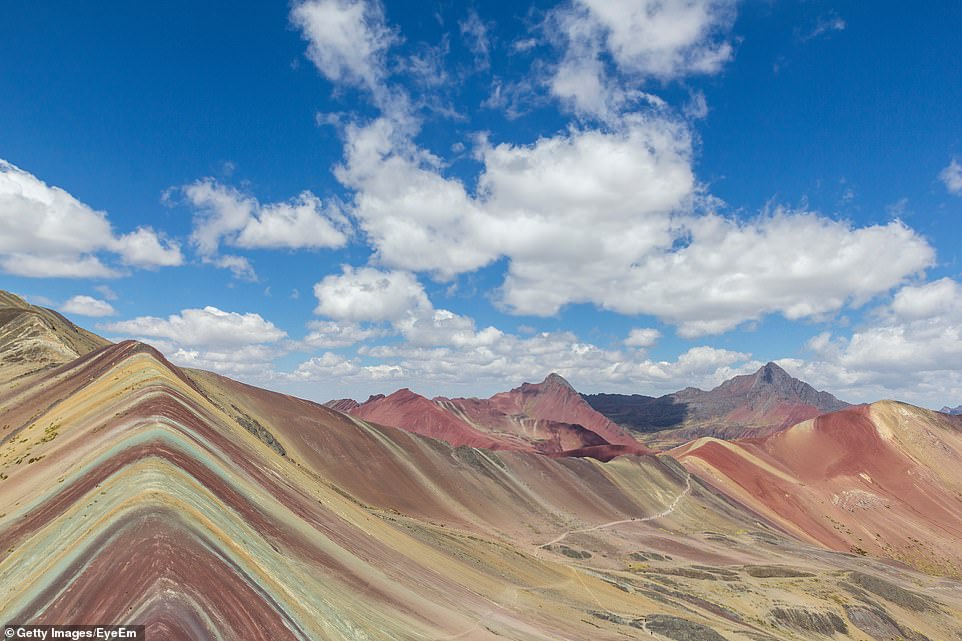 Rainbow Mountain sits at an elevation of 17,000ft in Peru and is, according to one website, fast becoming the country’s second-most visited site after Machu Picchu. The peak’s hues only became visible in 2015 when its once-permanent snow cover melted 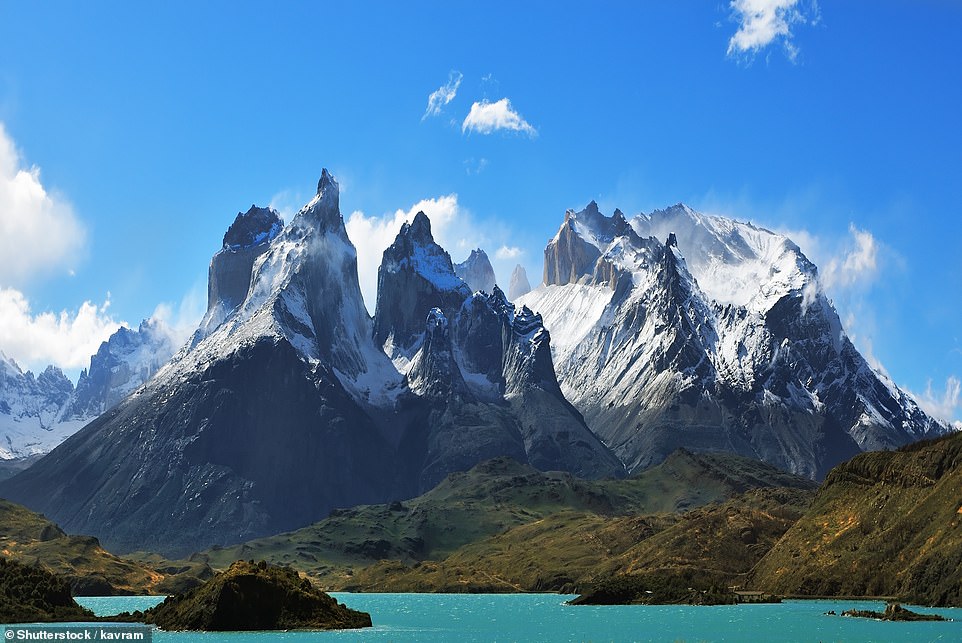 The Torres del Paine National Park in Chile is home to some of the planet’s most incredible, otherworldly peaks. These are the Cuernos del Paine, which stand at over 6,561ft