Home » The Algarve is the cheapest Eurozone destination for Britons

Revealed: The Algarve in green-listed Portugal is the cheapest Eurozone destination for British holidaymakers (and Australia and New Zealand are the countries they most want to visit)

The Algarve in Portugal is the cheapest Eurozone destination for British holidaymakers this summer.

That’s according to the 2021 Post Office Travel Money Holiday Money report, which also reveals that Portugal – one of the 12 countries on the UK government’s ‘green list’ for travel and accepting Britons from Monday – has earned the highest rating for good value from UK holidaymakers.

When British tourists were asked to name the destinations they believed offered good value, Portugal topped the ratings alongside ‘amber light’ rated Greece and Spain’s Costas – providing a clue to where they are most likely to book holidays once travel is allowed. 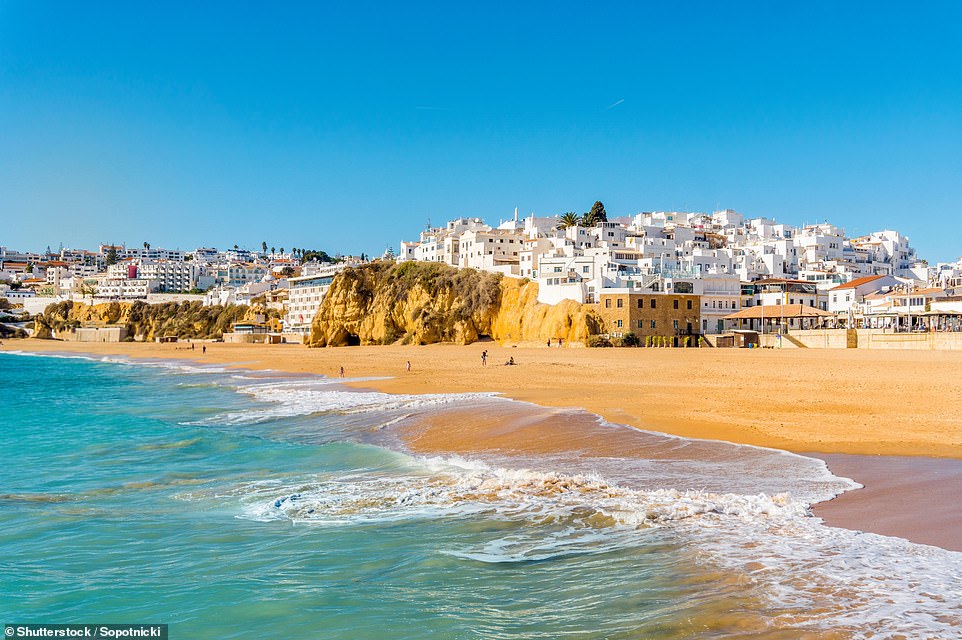 The Algarve in Portugal, pictured, is the cheapest Eurozone destination for British holidaymakers, according to the annual Post Office Travel Money Holiday Money report

All three scored 89 per cent and that approval rating rose to 90 per cent or more among holidaymakers who had previously visited those countries (Greece – 92 per cent, Spain – 91 per cent, Portugal – 90 per cent). Thailand was named the best-value long-haul destination with a score of 81 per cent, rising to 92 per cent among past visitors.

However, according to the annual report’s Worldwide Holiday Costs Barometer of 46 destinations, Sunny Beach in Bulgaria – currently on the government’s ‘amber light’ list – for the fourth consecutive year is the destination where holidaymakers will actually find the lowest prices for a range of eight tourist staples: a three-course evening meal for two with wine, a bottle of beer, a glass of wine, a can of Coca-Cola, a large bottle of water, a cup of coffee, suncream and insect repellent.

It says that prices at Sunny Beach were already at rock-bottom, but have fallen a further 14 per cent since last spring. It’s now possible to buy the eight tourist staples for just under £28, making Sunny Beach a quarter cheaper than runner-up Turkey.

Barometer costs in Marmaris have also fallen by around 14 per cent year on year to £37, but this is entirely thanks to the weak Turkish lira, says the Post Office. 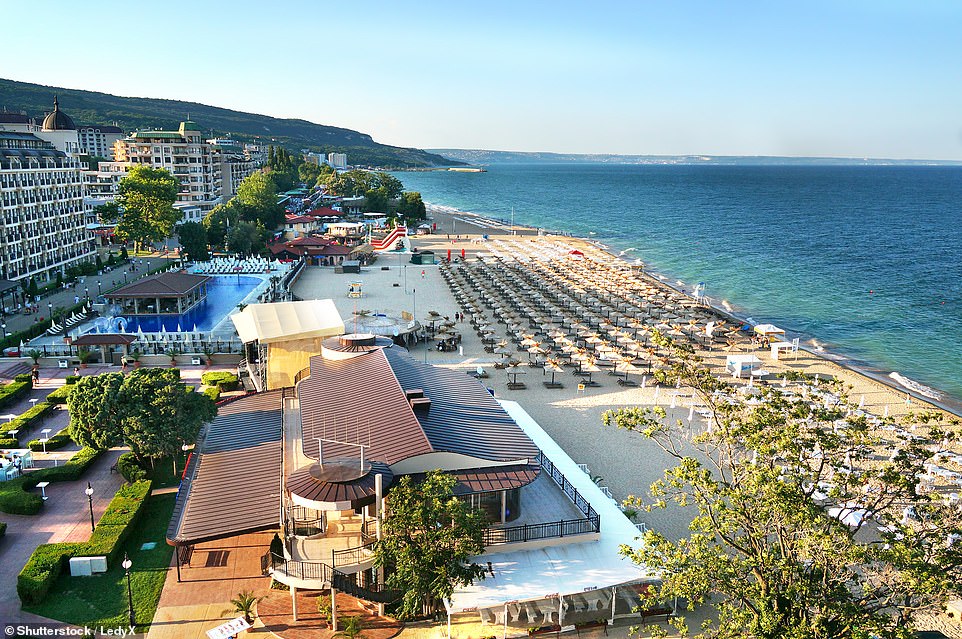 Sunny Beach, Bulgaria, pictured, which is currently on the government’s ‘amber light’ list, is the destination where UK holidaymakers will actually find the lowest prices for a range of eight tourist staples 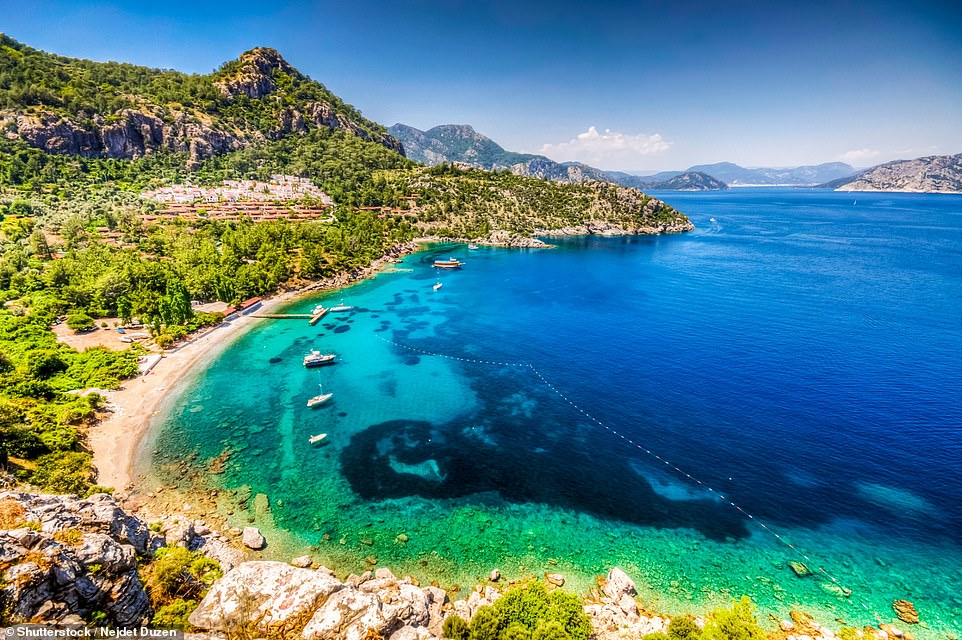 Costs in Marmaris, Turkey (pictured), which is the second-cheapest destination overall, have fallen by around 14 per cent year on year 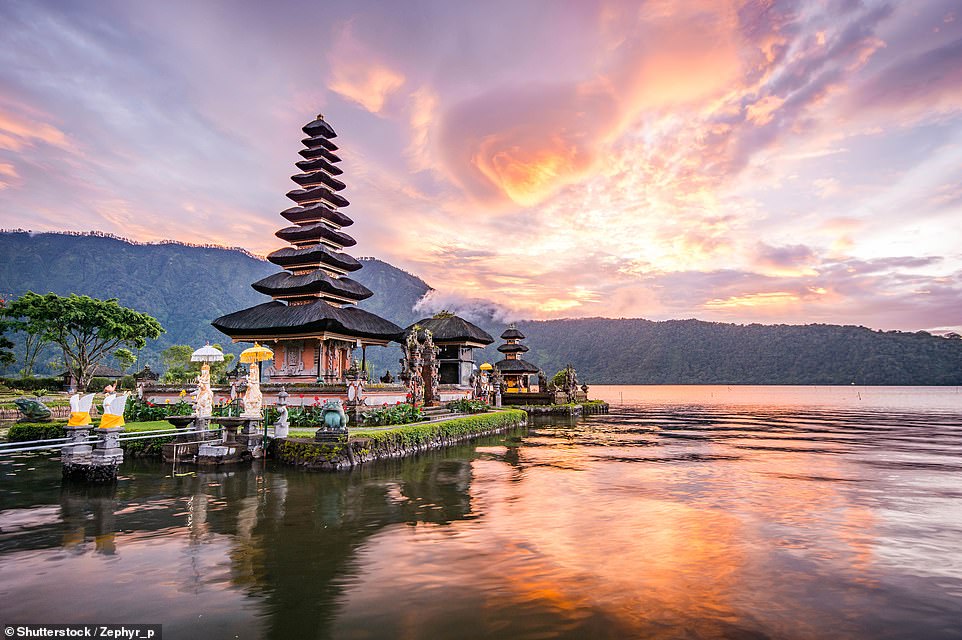 Bali, pictured, is the cheapest long-haul destination for Britons thanks to a 13 per cent fall in barometer costs

The Algarve (£44) completes the top three, with a 16.5 per cent fall in barometer costs, helping it consolidate its long-established position as the Eurozone’s cheapest resort area.

The price fall has helped Portugal to pull away from Spain’s Costa del Sol, which is 31 per cent pricier at £58. The Costa has fallen from fifth to seventh place in the barometer top 10 after registering a three per cent price rise. 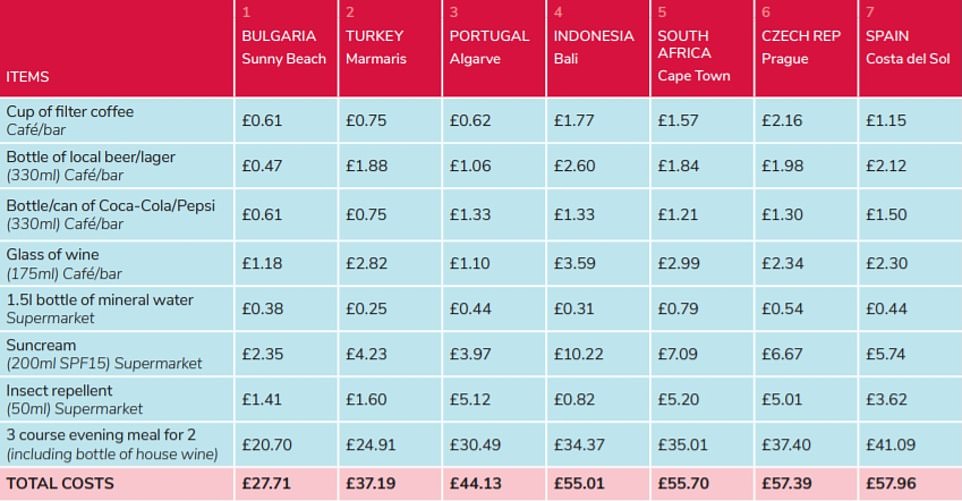 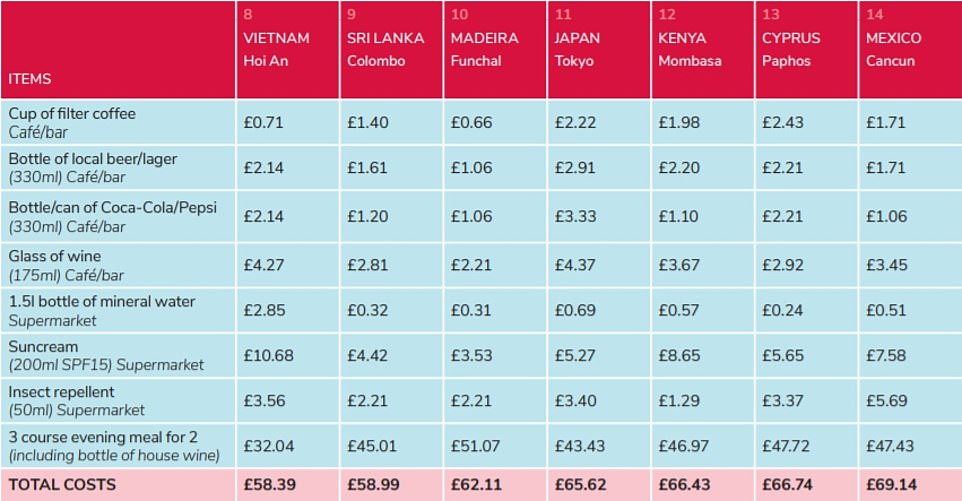 The second new entrant to the best value top 10 is Sri Lanka (9th), which replaces Japan, where prices in Tokyo (down from 3rd to 12th in the table) have risen 24 per cent to £66.

The 16 per cent reduction in prices to £59 in Sri Lanka is a consequence of the weak rupee, since local prices remain on par with a year ago. Prices for long-haul destinations were provided by tour operator Travelbag.

While Thailand was named best-value long-haul destination by UK holidaymakers, the Worldwide Holiday Costs Barometer reveals that prices are lower in both Bali and Vietnam. 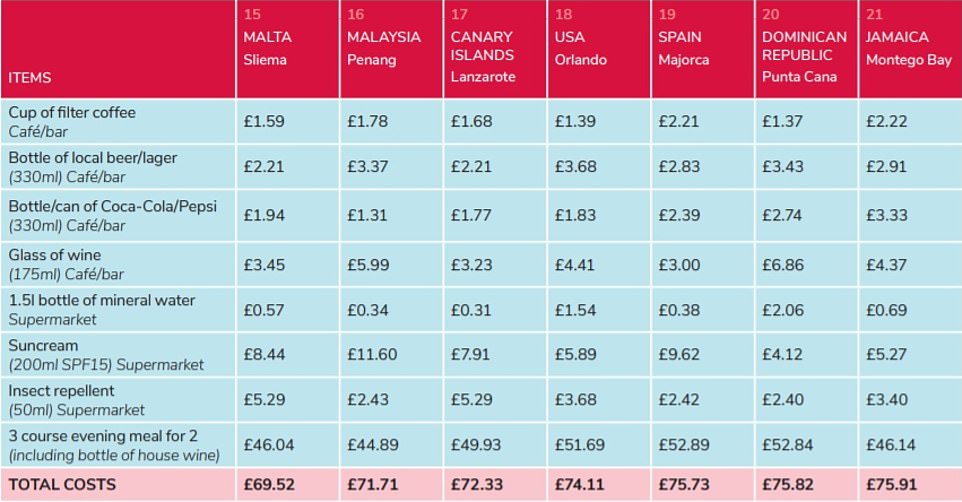 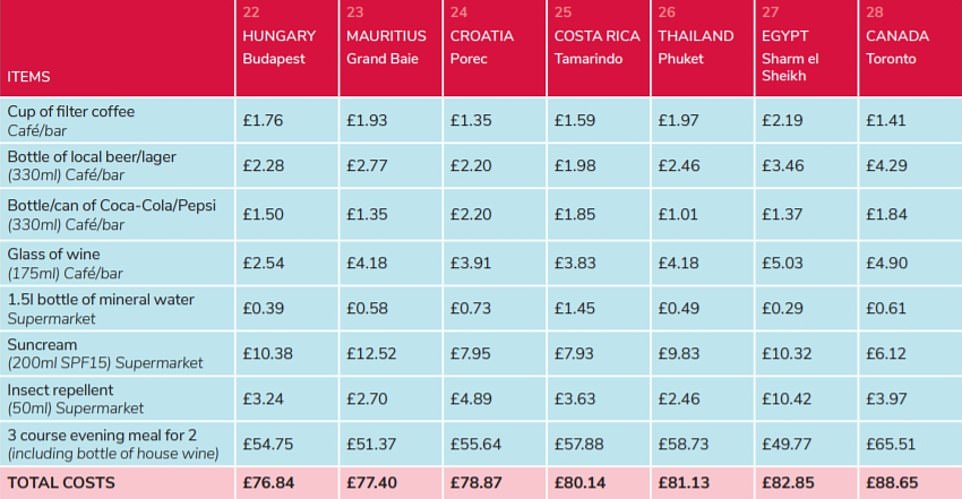 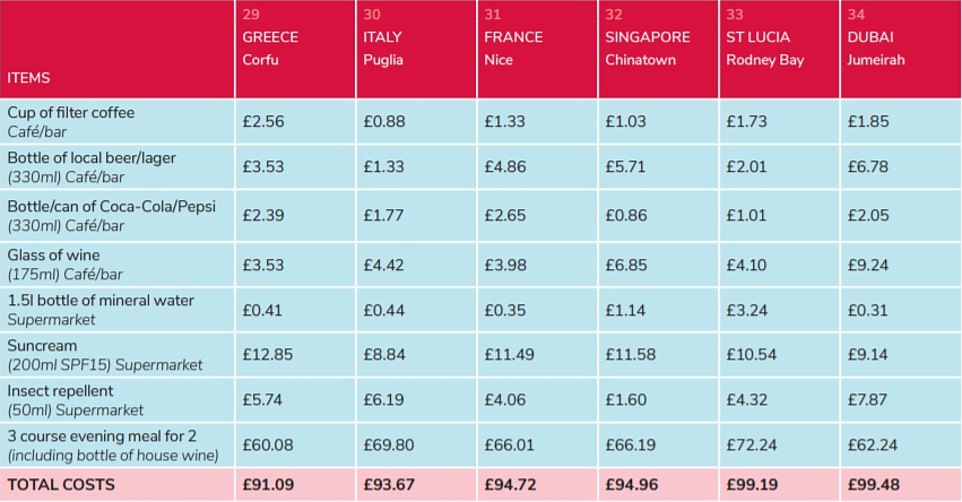 These tables show the mid-level destinations for value in 2021, from Malta to Dubai

Bali (£55) has risen up the barometer table to fourth place, thanks to a 13 per cent fall in barometer costs, making it the cheapest long-haul destination surveyed this year.

Cape Town, South Africa (£56, 5th), and Czech capital Prague (£57, 6th) complete the 10 best-value destinations – although prices have risen 11 per cent in Cape Town, one of only seven destinations surveyed to show an increase. 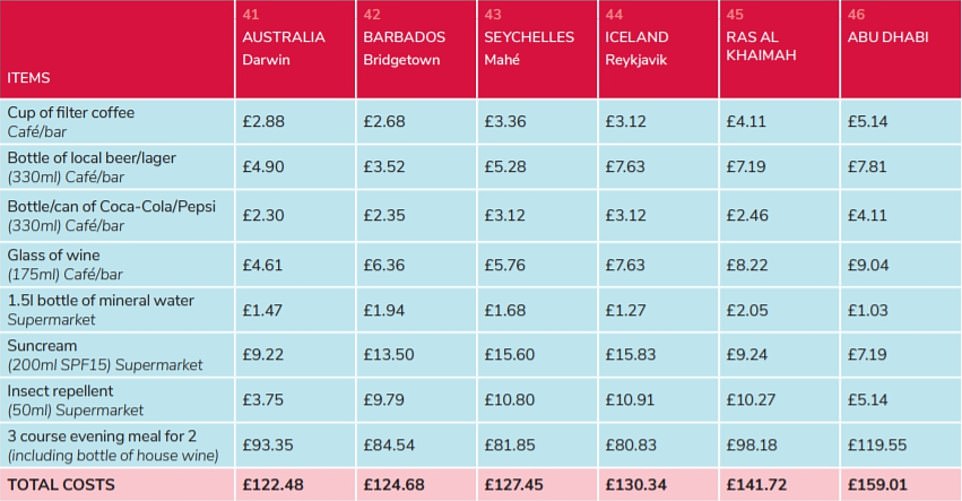 By contrast, prices have fallen in over three-quarters of the 37 destinations that were listed in last year’s Worldwide Holiday Costs Barometer – by over 10 per cent in a third of them.

Turning to the outlook for travel, the report’s overarching theme, consumer research on attitudes to holidays abroad reveals caution, anticipation and aspiration in equal measure, says the Post Office.

Besides obvious concerns about the impact of Covid-19 on holiday cost and safety, with 90 per cent worried that changes to travel rules could cost them money, two-thirds of consumers remain concerned about post-Brexit red tape and delays.

When asked what would prompt their future holiday choice, 57 per cent of holidaymakers named scenery, while 43 per cent said it was the chance to see the ‘world’s great sights’ and 37 per cent said they wanted to see wildlife. 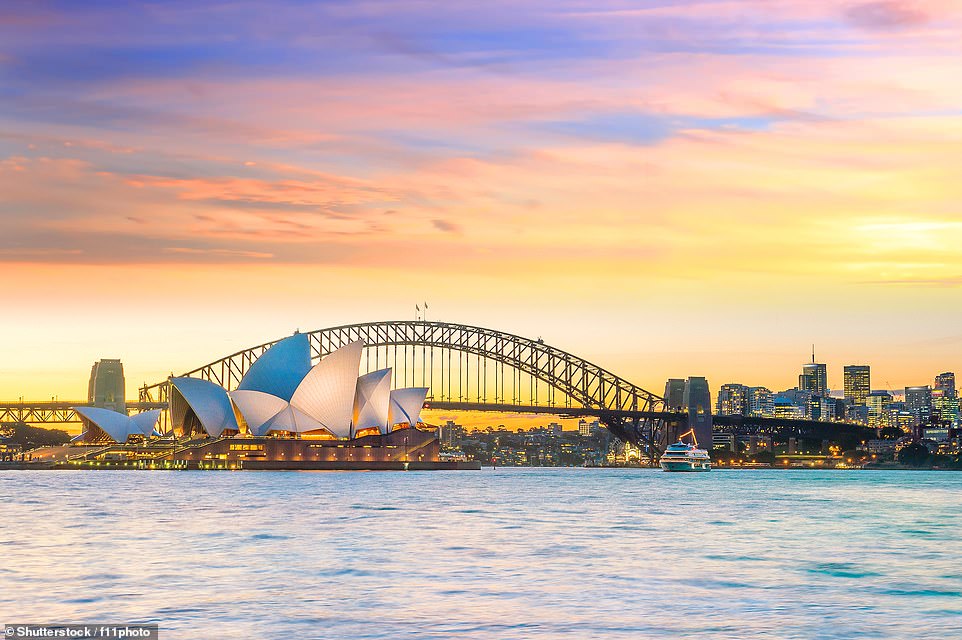 Australia – currently off-limits to UK visitors – topped the list when consumers were asked by the Post Office about which destinations they would like to visit the most. Pictured is Sydney Harbour 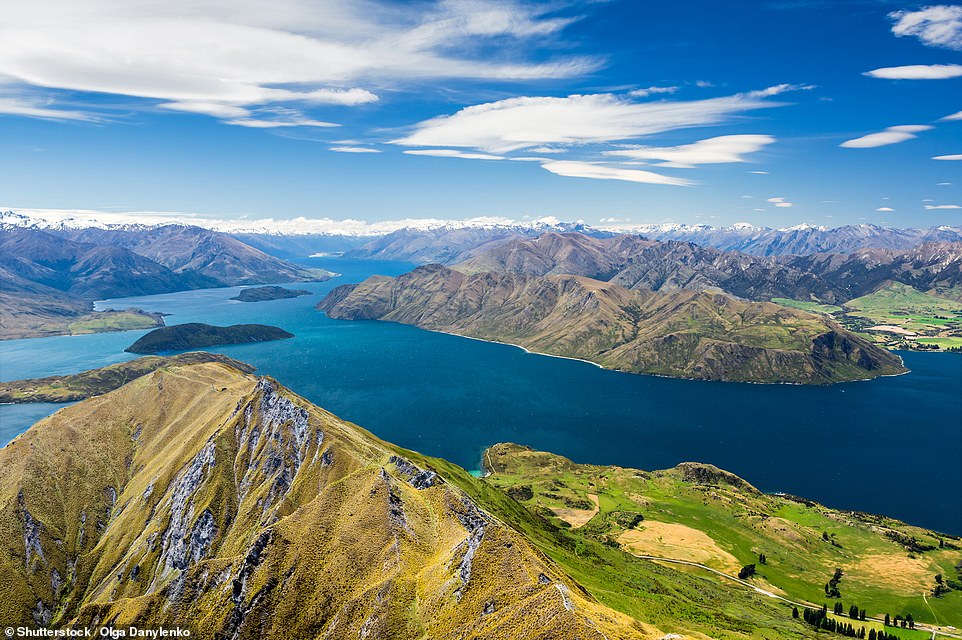 The beautiful Lake Wanaka in New Zealand, which topped the list with Australia as the No.1 bucket list destination

This helps to explain their bucket list choices, says the Post Office. Australia and New Zealand – currently off-limit to UK visitors – top the list and were chosen by 44 per cent of consumers. Canada was third with a 41 per cent vote, while Iceland (38 per cent) was the highest-placed European destination.

However, the healthy performance of sterling against most holiday currencies could prove the tipping point in their decision making.

Analysis by Post Office Travel Money reveals that sterling is currently stronger than a year ago against over three-quarters of its top 30 currencies. The most significant gains of more than 20 per cent are against the Turkish lira, Costa Rican colon and Jamaican dollar. Sterling has also risen noticeably against the US dollar and Caribbean currencies.

Nick Boden, Post Office head of travel money, says: ‘Sterling’s strength against the majority of holiday currencies means it really ought to play an important part in decisions about where to travel abroad.

‘The purchasing power of the pound means people changing £500 into US dollars or East Caribbean dollars, the currency for Antigua, St Lucia and Grenada, will get the equivalent of around £61 extra.’