Top of the hops! It’s just two hours from London by train. But what awaits in Paris? Style guru Stephen Bayley offers a waspish view of a city where glamour meets Gallic superiority

What is the mood in Paris? No better season than autumn to find out. The Salon d’Automne was the annual exhibition which launched Cubism and, a century later, we still see this most beautiful of cities through the eyes of its revolutionary painters.

And taste it through chefs. In Anthony Bourdain’s favourite bistro in Belleville, a fabulous caricature of Frenchness, I sit next to a corpulent local noisily enjoying a joue de cochon. Hearing our English, he shakes his head: ‘You poor people. You have not the fuel.’

The French do condescension as an art form. It is not long since a president of the Republique wondered how you could trust a country like ours with such bad food. 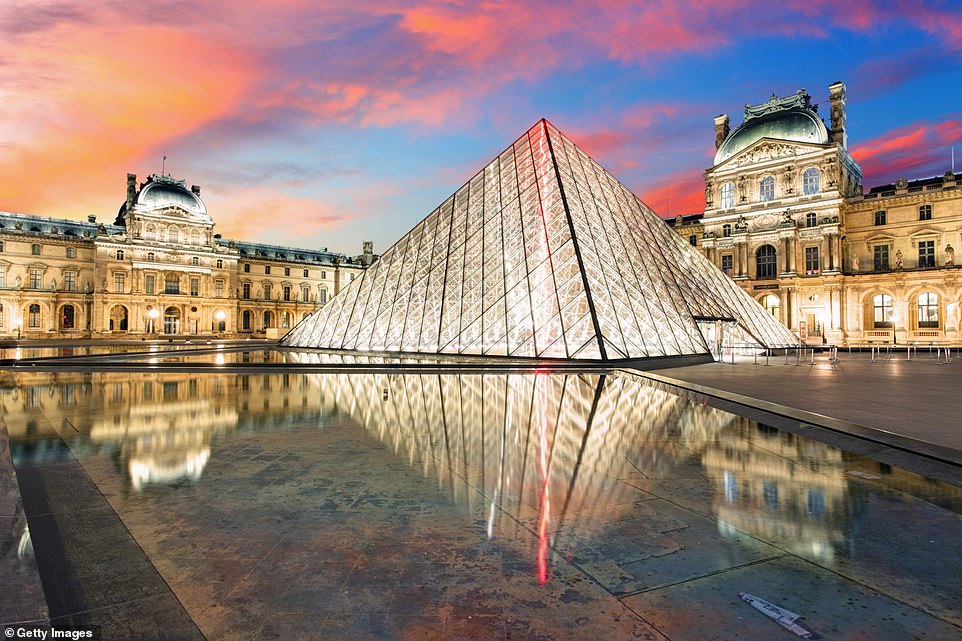 Visionary: The Louvre’s glass pyramid, a ‘Parisian grand projet’ designed by the architect I. M. Pei 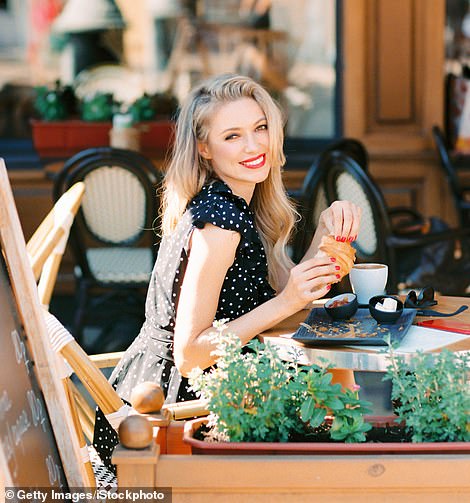 Coffee and croissants at a cafe in Paris. Stephen’s go-to spot is Café de la Mairie in the Place Saint Sulpice

But French food is now undergoing one of its periodic re-examinations. Haute cuisine has come and gone. Ditto nouvelle cuisine. Bistronomy never really went away but the signal event of this gastronomic year in Paris was the departure of the ultra-sophisticated Alain Ducasse from the Plaza Athenee to be replaced by Jean Imbert, an arriviste with a knack for simplicity.

But now that London has become the restaurant capital of the world, at least in terms of vitality and variety, a French menu can seem very ancien regime, being so meat-centric. We have far better balanced diets than Parisians.

A good place to ponder the perpetual enigma of Anglo-French relations is the courtyard of the Castille, an understated, comfortable hotel in Rue Cambon, behind the Ritz and next door to the HQ of Chanel. So this is La France profonde, so far as style and luxury are concerned.

I ask Alexandre Cochet, the hotel’s marketing director, for his diagnosis of Paris’ mood today. He says international visitors are returning, but not many from Britain.

When things are so quiet, why is it so difficult to get a restaurant reservation? Monsieur Cochet shrugs in that French way (it’s their second language) and explains that French restaurants have often been sniffy about online bookings. Now they do not even bother to answer the telephone.

My revenge is to prefer a simple croque monsieur and carafe of white at a pavement cafe. My favourite is Café de la Mairie in the Place Saint Sulpice, the very essence of Paris with change from €20.

Meanwhile, how absurdly French that the elitist Ritz — where a martini in The Hemingway Bar costs €34 (£28) — is adjacent to the egalitarian Ministry of Justice, while a few yards away on the Rue de Rivoli, shops are boarded-up, proud stone defaced with graffiti, dossers snoring in sleeping bags and gutters running with rubbish. The mood of Paris is confused.

Yet even in testing times, the French demand for luxury trumps other considerations. This summer, Bernard Arnault’s Louis Vuitton Moet Hennessy (LVMH) colossus completed the boggling refurbishment of the 1910 Samaritaine department store. The design features a spectacular atrium by an admirer of Eiffel. 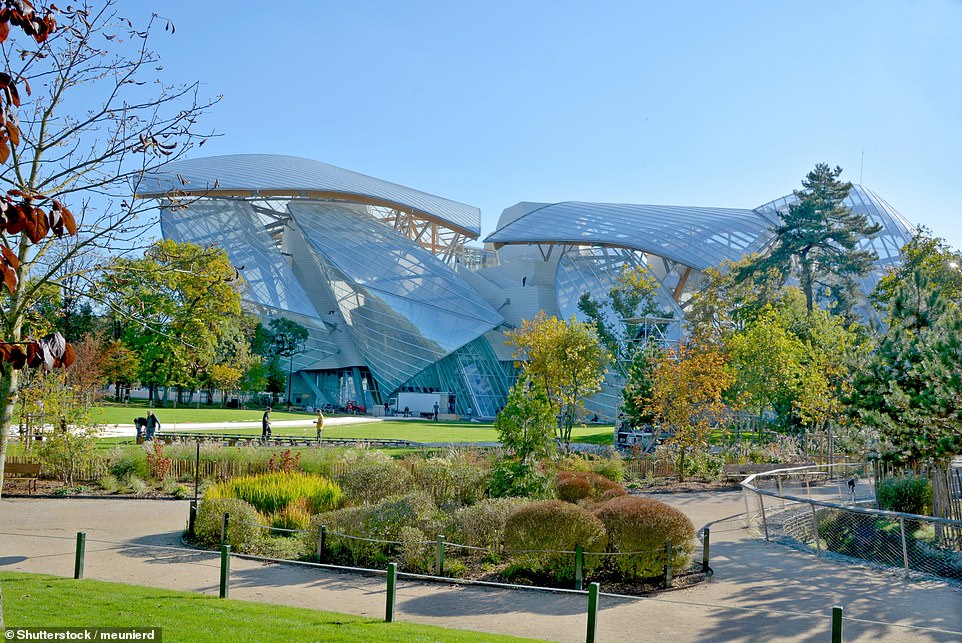 Stephen says the Fondation Louis Vuitton, pictured, ‘looks like the aftermath of an explosion in a builder’s depot’ 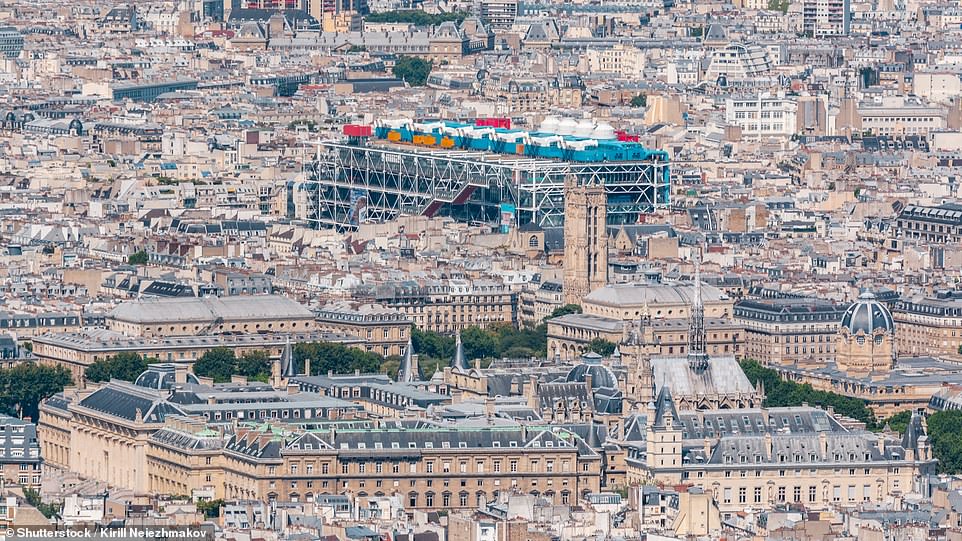 GOOD TO KNOW BEFORE YOU GO

Fully vaccinated travellers can visit France as tourists — the NHS Covid Pass is accepted as proof.

A ‘sworn statement’ that you do not have symptoms must also be completed, which is best to print and then fill out by hand via the French ‘entry requirements’ of gov.uk. To enter restaurants and bars, you need a pass sanitaire to prove your vaccination status; see uk.france.fr/en.

Masks are expected to be worn indoors in public places except at restaurant and cafe tables.

On the Seine-side of the store is the brand-new Cheval Blanc hotel crammed with serious art to signal its ambition and expense. When I ask about restaurant reservations, I’m given a don’t-even-think-about-it look.

The Cheval Blanc is the hospitality version of LVMH’s Pharaonic ambitions in the arts, best appreciated in the extraordinary Fondation Louis Vuitton in the Bois de Boulogne: a fantastical edifice by Frank Gehry which looks like the aftermath of an explosion in a builder’s depot.

This Gehry design is just the latest of Parisian grands projets where France’s impressive estimate of its own importance has been expressed by foreign architects. Richard Rogers’ Pompidou Centre, now nearly 50 years old, is one example; I. M. Pei’s glass pyramid at the Louvre is another.

Visit these great museums, if you must, but they have surrendered too much on the altar of tourism. They are not places well-suited to contemplate art, nor to an understanding of France.

I prefer a less self-conscious everyday Paris, if a culture so vain can ever be described in modest terms. I always visit the lively street market in the Left Bank’s Carrefour de Buci and bring home pungent cheeses and expertly butchered rabbit.

But if it does not sound overly maudlin, I enjoy dead Paris, too. There is the starkly beautiful Monument de la Deportation, a subterranean retreat beneath the scaffolded Notre-Dame: a haunting space devoted to French Jews not spared in Hitler’s war. In contemporary France with so many unresolved social arguments, this is a disturbingly thrilling experience.

Or, more cheerfully, to the Pantheon, the great university cathedral modelled on London’s St Paul’s. Here to commune with the ghosts of Voltaire, Rousseau and, recently, the cabaret dancer and Resistance heroine, Josephine Baker, all buried here.

Even better, to appreciate la gloire de la France, to the Montparnasse cemetery where you find buried Baudelaire, Serge Gainsbourg and Andre Citroen, whose car company’s chevrons adorn his monument.

Paris traffic, still largely Citroens, was always shocking, but once rewarded bravery: if you could find a space, you could park in it, pavements included. Today, Mayor Anne Hidalgo is orchestrating politically-inspired congestion and the city fumes in a stationary conga-line of indignation.

Heroically, the French maintain a taste for grandeur not much satisfied by the embarrassing circumstances they find themselves in. The French novel is not what it was. French cinema is not what it was. Ditto cars. The modern Citroens lack the ingenuity and beauty of their ancestors. 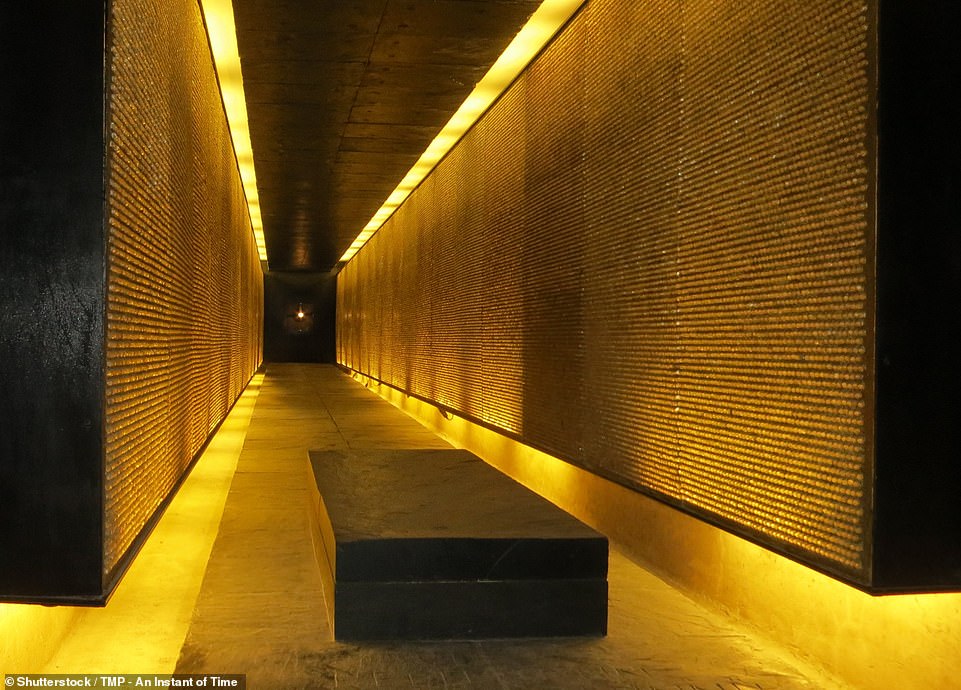 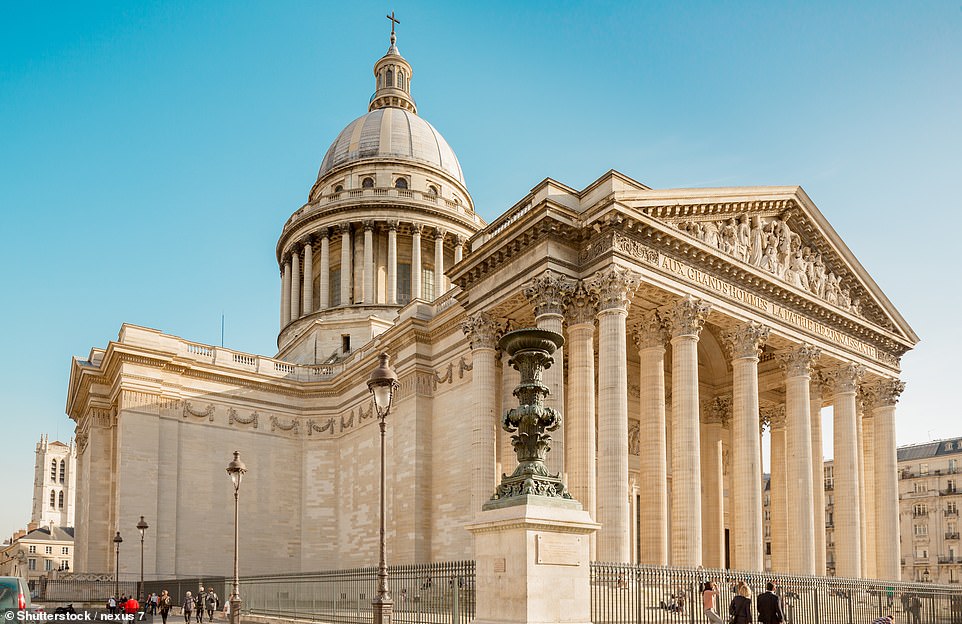 Pictured is the Pantheon, which Stephen describes as ‘the great university cathedral modelled on London’s St Paul’s’ 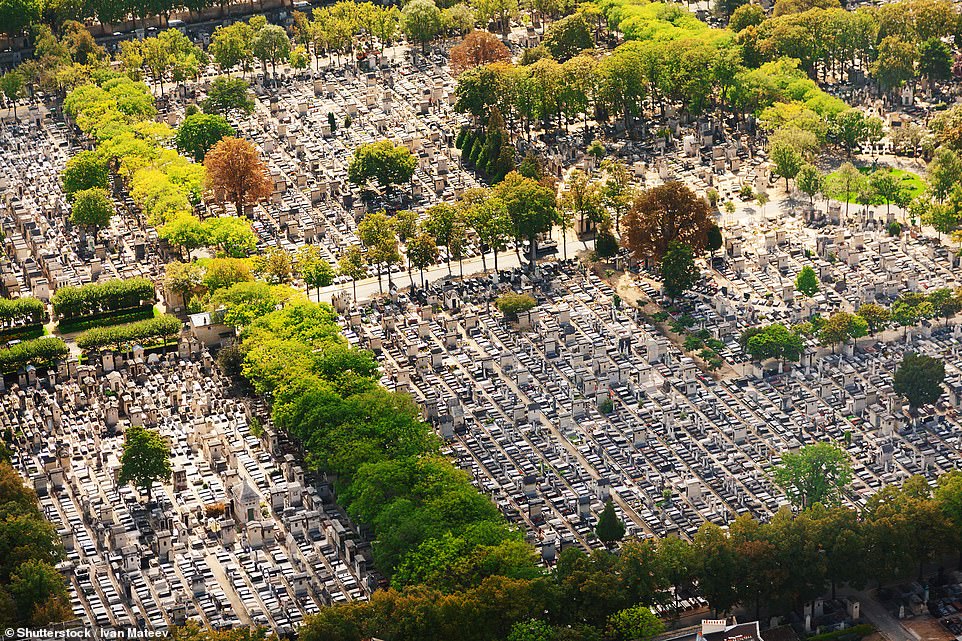 Stephen says that you can appreciate ‘la gloire de la France’ in the Montparnasse cemetery, pictured above

The Eurostar (eurostar.com) from London to Paris is from £78 return. Doubles at the Hotel Castille (starhotelscollezione.com) are from £446. Visit parisinfo.com.

Thus, it is one of the ironies of the Macron era that its greatest achievement is the €132m restoration of the Hotel de la Marine, the French Admiralty building on Place de la Concorde.

This retro tour de force came in the same year that an over-ambitious submarine deal embarrassingly sank, taking the navy’s (and France’s) pride with it. Take the train to Paris. It’s easy. The second generation Eurostars lack the quirky charm of the originals, but are airy and modern. I doubt Raymond Blanc, one of France’s most successful exports, is himself in the galley, but his autograph roast vegetables and trout are surprisingly good.

Eurostar’s Gare du Nord has always been a test of French attitudes. The architecture once had a proud imperial flavour, but its history has been one of decline. Since Eurostar began in 1994, the station’s slumminess always seems a calculated insult to travellers. In Brexit Britain, London’s superb St Pancras suggests openness and optimism while the Gare du Nord offers a lavatory for transients.

Recently, a scheme to turn the whole site into a Babylon of glitzy retail was proposed and promptly rejected without much enthusiasm: an example of rare French self-effacement.

But I am thrilled to return to Paris after too long away. It remains impossibly wonderful, a city that always gives what the late writer, James Salter, calls a ‘feeling of approval in life’.

But you also sense that something, somewhere is wrong. There are occasional shadows in the City of Light.

In Paris guidebooks, the Metro features as a means of travelling between the attractions of the city. It’s not billed as an attraction in itself. But whereas the London Underground (of which I once wrote a history) is interesting, the Paris Metro is beautiful.

We’re going to hear a lot about the Metro in the coming years because, under the banner ‘Grand Paris Express’, it will be hugely expanded.

There will be line extensions — the first opened late last year, adding four new stations to the northern end of Line 14 — and four new lines will be built by 2030. But here are some virtues of the system as is. 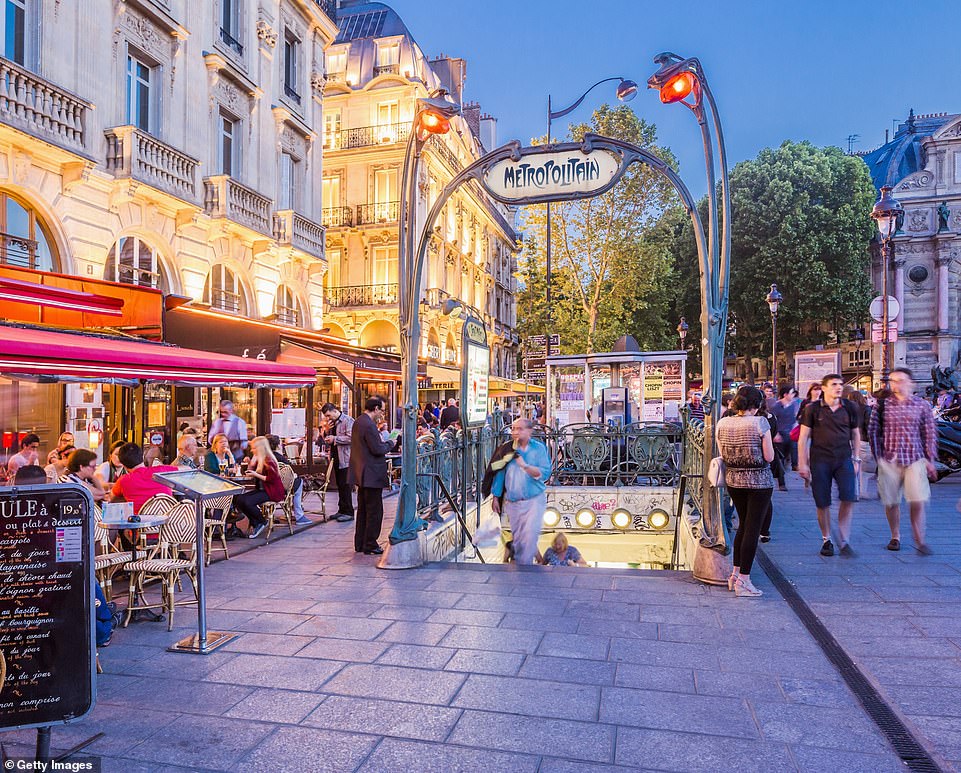 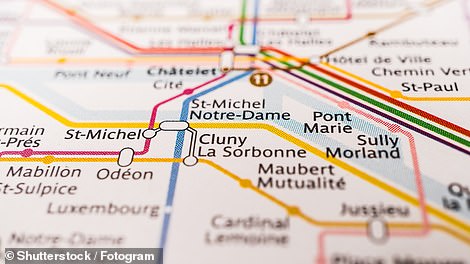 Most of the Metro system was built between 1900 and 1920, Andrew reveals

One benefit of going to Paris on Eurostar is that you’re plugged straight into the system: you’re on the platforms of Gare du Nord Metro after descending just a few stairs.

The Metro was built near the surface by digging a wide trench, inserting two tracks, then covering the trench over. This creates vault-like stations, pleasingly reminiscent of the wine cellar of a chateau.

Most of the Metro was built between 1900 and 1920 following an elegant design template, with white tiles that have bevelled edges, so they sparkle under electric light, and the station name is written in white on a blue enamel plaque. This remains the basic look.

These consist of a green iron railing from which two triffid-like stalks arise, with orange lanterns shaped like flowers at the tip.

These Art Nouveau entrances by Hector Guimard were installed to give the impression that the radically modern (because electric) Metro was something organic and natural. 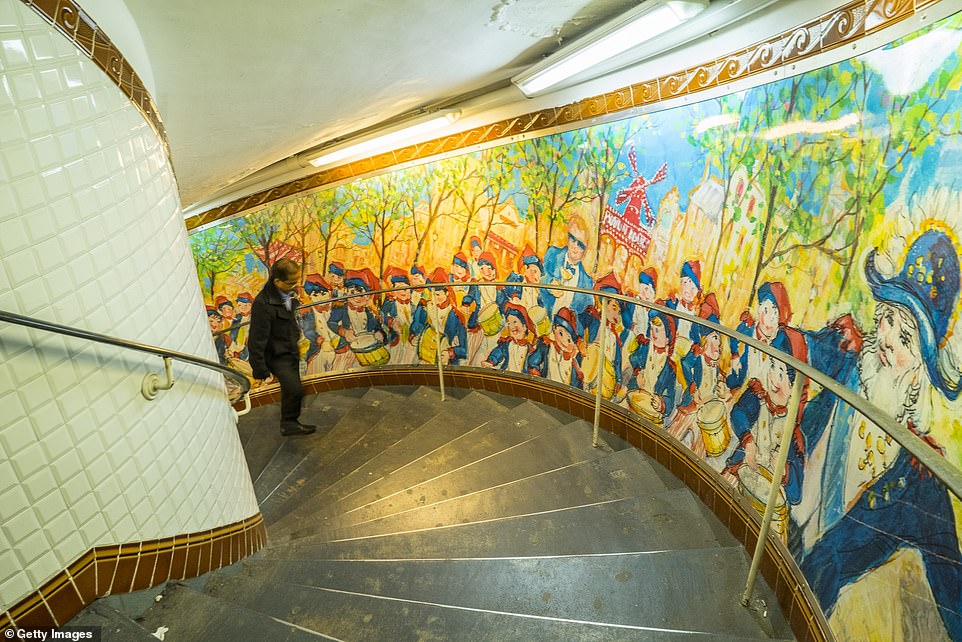 The Grand Paris Express scheme will extend the Metro to the far suburbs. It has been called the largest infrastructure project in Europe.

On some lines, the trains have tyres, allowing for faster braking — hence a faster service.

The first engineer of the Metro, Fulgence Bienvenüe, was a pioneer of electrical traction, but he lit his house with candles and favoured horse-drawn transport for his personal use.

Most of the network was built by the Compagnie du Chemin de Fer Métropolitain, but in 1910, a separate company, the Nord-Sud, built two lines: 12 and 13. Their stations have the white bevelled tiles, but with extra detailing in rich autumnal colours.

The best-preserved Nord-Sud station is Solférino on Line 12, but see also the concourse between Lines 12 and 13 at Saint Lazare, the Piccadilly Circus of Paris. This masterpiece of the Nord-Sud has a Moorish look and has been compared to a Turkish bath.

The newest so far, and deeper than the others. It was the first to be automated, and I like to sit at the very front of the train, pretending (discreetly) to drive it. (On the older trains on the line, there is a mock-up of a control panel, labelled ‘For Children Only’.) Line 14 trains go fast and seem to be racing along a street at night because the tunnel lights resemble street lamps.

When the Metro surfaces, the effect is spectacular. The best line for views is Line 3, which crosses the Seine twice. The crossing to the west is between Passy and Bir Hakeim, affording views of the Eiffel Tower.

Line 5 also crosses the river. It emerges on the right bank, where the train swirls around the Paris morgue before shooting into the roof of Gare d’Austerlitz on the opposite bank.