Spain has seen the number of confirmed coronavirus cases surge beyond 3,000 forcing its government to ramp up precautionary measures. In some of its most affected regions, authorities have begun to shut down schools and areas where large crowds of people may visit.

Following the news, the Foreign and Commonwealth Office (FCO) issued an updated travel warning for Britons with impending travel plans.

The FCO website states: “There is an ongoing outbreak of coronavirus (COVID-19). Cases have been confirmed in many countries, including Spain.

“You should comply with any additional screening measures put in place by the authorities.”

It continues: “Authorities in the most affected regions (Madrid, the Basque Country, La Rioja and Catalonia), are putting in place extraordinary measures such as the temporary closure of schools, public sports centres, theatres and daycare centres for the elderly due to an increase in coronavirus cases. 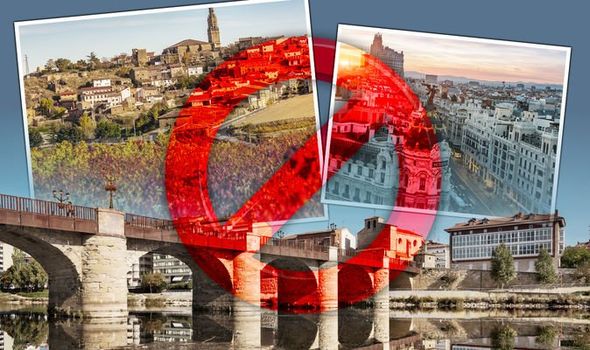 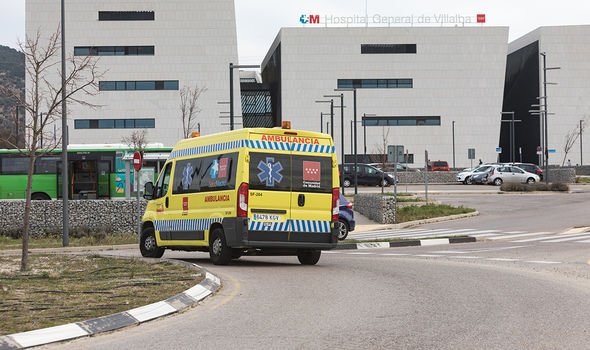 “The affected regions and others are prohibiting gatherings which involve more than 1000 attendees and are closing all educational centres, including nurseries, schools and universities for 15 days or until further notice.

“In other regions, individual schools are being closed where there are suspected cases of the virus.

“Some local festivals such as Las Fallas in Valencia and sporting events have been postponed.”

Britons planning on travelling to impacted areas, or who are already on holiday in the country, are advised to follow local authority updates.

According to Spain’s Ministry of Health, there have been 86 fatalities in total.

The government says it is taking these new precautions to avoid an “Italian scenario”.

The decision was made after a sharp increase in cases over the weekend.

“It is going to take time to see the effectiveness of these measures,” said health minister Salvador Illa.

“And if we see that they are not effective, and we have to take additional measures, we will take them.” 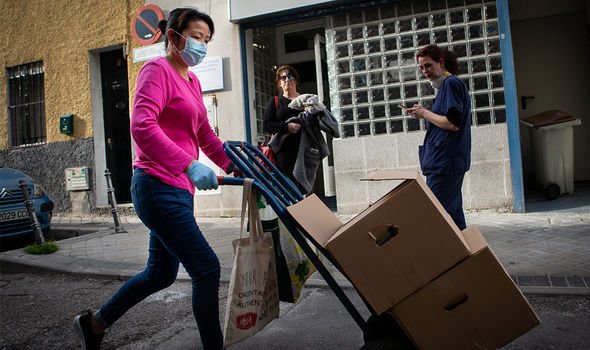 So far, one of the most impacted tourist destinations was the Balearic Islands, when a Tenerife hotel was placed under quarantine.

The disease was detected at the H10 Costa Adeje Palace Hotel when an Italian doctor began to show symptoms.

More than 700 guests, some of whom were British, were placed under quarantine.

Though the Canary Islands minister of health said a group of 130 low-risk guests, including 50 Britons, would be allowed to leave, many airlines said they would not fly guests back until they had completed the 14-day quarantine period. 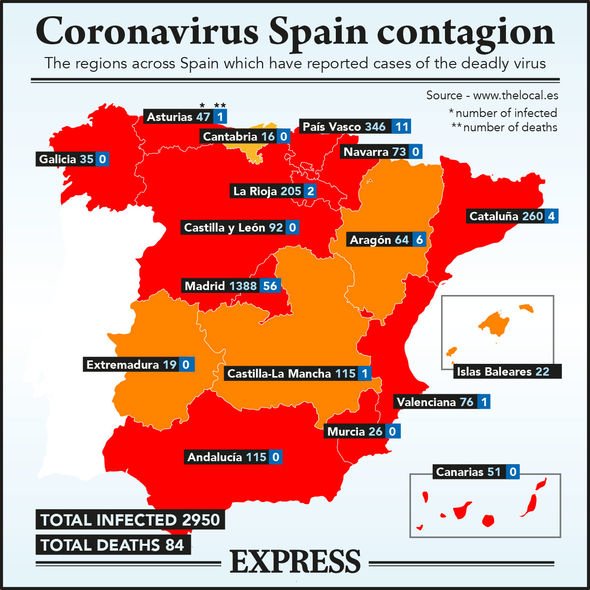 At the time the FCO issued a statement reading: “The Spanish authorities are dealing with confirmed cases of coronavirus in the H10 Costa Adeje Palace Hotel in Tenerife. If you’re in this hotel, you should follow the advice of the local authorities.”

The virus has also spread to the UK.

At the time of writing, there are 590 confirmed cases, though the exact number of people unknowingly suffering is not certain.

There have been 10 fatalities.