Queen Elizabeth II is one of the most well-travelled monarchs in the world. According to royal historian Kate Williams, if all of her International journeys were added together, Her Royal Highness has flown around the entire world a whopping 42 times.

During this time, however, it seems she has visited Canada more than any other country.

Queen Elizabeth has visited the North American nation, of which she is ceremonial Head of State, 27 times in total.

However, not all of these visits were official.

In fact, a couple of these stops were merely for convenience. 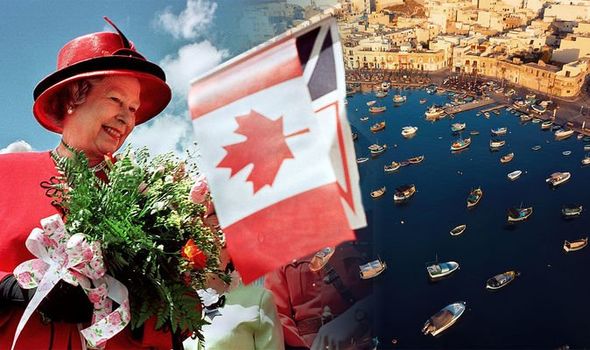 During long-haul trips to Oceania and the Caribbean islands, the royal plane often stops to refuel in Canada.

Though the Queen has frequented Canada a number of times, these aren’t necessarily down to it being her preference, but rather due to her devotion as leader of the Commonwealth.

Canada is one of the 54 Commonwealth nations.

According to royal insiders, Queen Elizabeth does have a favourite hotspot, where she is said to have spent some of her most “magical” years.

The Queen has often spoken of her love of the country, having lived there for two years with Prince Philip in the early days of their marriage.

The young couple lived at Villa Guardamancia on the island between 1949 and 1952.

It was here that the Queen was able to enjoy something close to a “normal life”, according to Lady Pamela, who was one of the Queen’s bridesmaids.

She told MailOnline: “The Princess really loved Malta because she was able to lead a normal life, wander through the town and do some shopping.

“It was the only place that she was able to live the life of a naval officer’s wife, just like all the other wives.

“It was wonderful for her and it’s why they have such a nostalgia for Malta.”

Lady Pamela continued: “They were magical days of endless picnics, sunbathing and waterskiing.”

There were also plenty of “wild” parties which the Queen and her new husband enjoyed.

In her book Philip Revealed: A Man of His Century, author Ingrid Seward quoted another Lady Abel Smith, one of Elizabeth’s ladies-in-waiting, writing: “There were some very wild parties with spoons and buns being thrown, though luckily not butter. She was amazed by the spoons though.”

The author added: “Apparently when the games became too boisterous, Philip would lift his wife on to the piano together with ladies-in-waiting to keep them out of the firing line.”

Queen Elizabeth has since returned to the island, in 2007, when it is reported she asked to see the villa again.