Monthly head shaves and daily two-hour chants: Meet the monk living at a monastery in Mongolia that survived Stalinist repression to become one of the country’s oldest 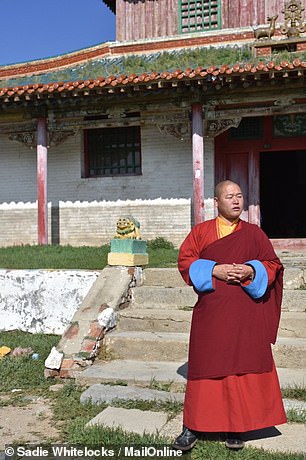 Battulga is a monk at the Shankh Monastery

It’s eerily quiet when I approach the Shankh Monastery, one of Mongolia’s oldest Buddhist temples.

A few dogs bounce around, lone birds fly overhead and then the colourful robes of monk Battulga come into view.

The 33-year-old is happy to receive guests as he admits things can be quiet with just nine other monks living at the 17th-century complex.

At its height, the place of worship – located 361km (224 miles) from the capital of Ulaanbaatar in the Övörkhangai province – housed more than 1,500 monks but in 1937 it was closed after being hit by Stalinist repression.

Buildings were destroyed and many of the monks were executed or sent to labour camps in Siberia.

However, Battulga tells me through a translator that five monks secretly relocated the monastery’s activities to a ger (a type of tent) during the communist era and the ‘worshipping and chanting never stopped’.

One of these monks helped to reopen the monastery in 1990 after the revolution and thankfully, the main temple dating to 1647 had escaped significant damage.

Today Shankh, along with the many other Buddhist monasteries scattered across Mongolia, helps form a key part of the country’s national identity. The whitewashed main temple features ornate woodwork, battered by the extreme weather, and plants can be seen protruding through the roof tiles.

Battulga tells me that when he was two years old he lost mother and then at the age of 11 he also lost his father to illness.

It was when he was in grade three, at the age of 14, that he then decided to become a monk. 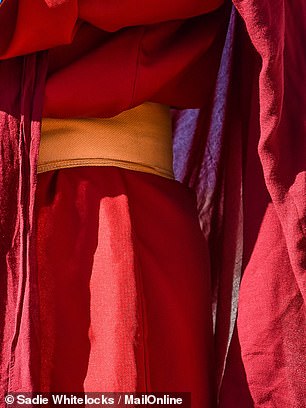 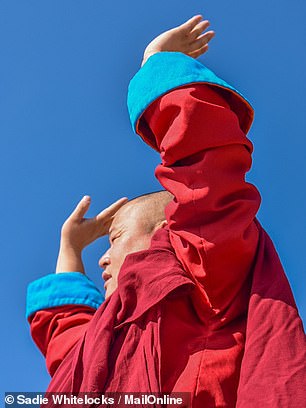 The devout Buddhist says he enjoys the simplicity of monastic life. He owns just two sets of red woollen robes

The devout Buddhist says he enjoys the simplicity of monastic life.

He owns just two sets of woollen robes and a pair of traditional leather boots.

On the subject of self-maintenance, Battulga says he shaves his head just once a month as it tends to ‘grow back slowly’.

Taking a moment to stretch his arms towards the sky, with the blue cuffs of his robes matching the blue hues above, he fills me in on his daily routine.

He says: ‘I get up at seven o’clock in the morning and have breakfast and then chant for two hours.

‘Then I get up and have a break for lunch. After lunch, I do religious studies.

Today Shankh, along with the many other Buddhist monasteries scattered across Mongolia, forms a key part of the country’s national identity 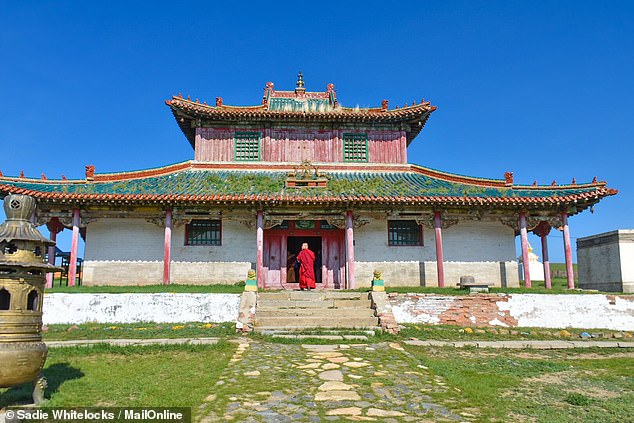 The main temple, dating to 1647, as it appears today with ornate woodwork and plants growing through the roof

‘In the evening I take a break to play outside, then dinner and bed around 10 o’clock.’

Battulga reveals that he eats milk porridge and doughnuts for breakfast and lunch and a portion of beef or mutton at dinner time.

My translator, a bubbly lady from Ulaanbaatar also in her 30s, wants to know if Battulga is single.

He says that he is, but the monks can get married if they wish and have a family.

If they choose this path, they can continue practising as a monk, but they cannot live at the monastery.

So, what does it take to be a monk in the 21st century?

Before heading into an outbuilding for a spot of milk porridge, Battulga replies with a smile: ‘You really have to have a kind spirit and be willing to help others.’