Who needs to go abroad? It’s not too late to book a family holiday in ‘the English Alps’ where youth hostels have opened their doors – and rooms, and ‘landpods’, are still available (for now)

Here’s a useful little secret for you: Britain’s youth hostels are open for business. They’re cheap, located in beautiful areas and have taken Covid precautions. And best of all, they have vacancies.

My wife came up with the idea two weeks back. After foreign holidays hit the wall and every B&B in Britain sold out a few minutes later, we feared that we would be going nowhere this year.

On a whim, she Googled the Youth Hostel Association (YHA) and found a clutch of lovely hostels nestled in the verdant heart of the Peak District, most of which were set in historic buildings, and all of which were available. 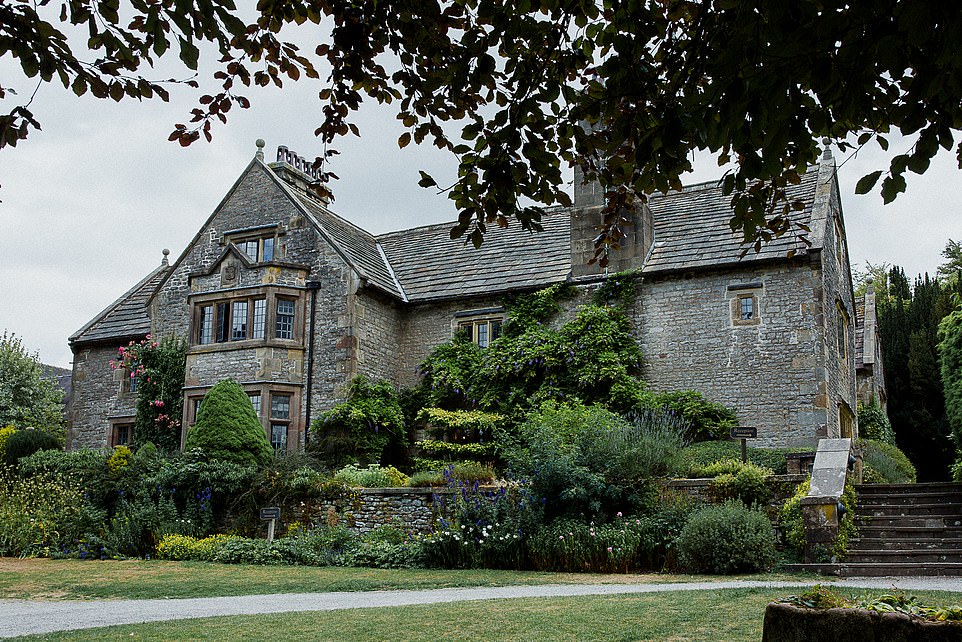 YHA Hartington, a beautiful and historic building tucked away among the Peaks, is accessible to all for very affordable rates 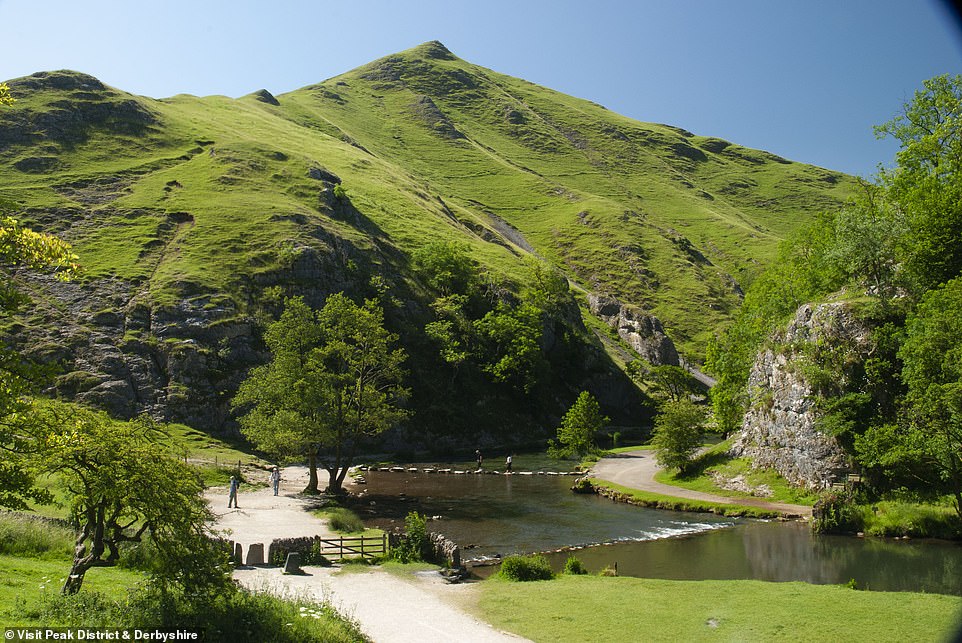 The Peak District, described by Enlightenment philosopher Thomas Hobbes as ‘the English Alps’, boasts some of Britain’s most beautiful landscapes. Pictured is the River Dove, which runs through stunning ravines 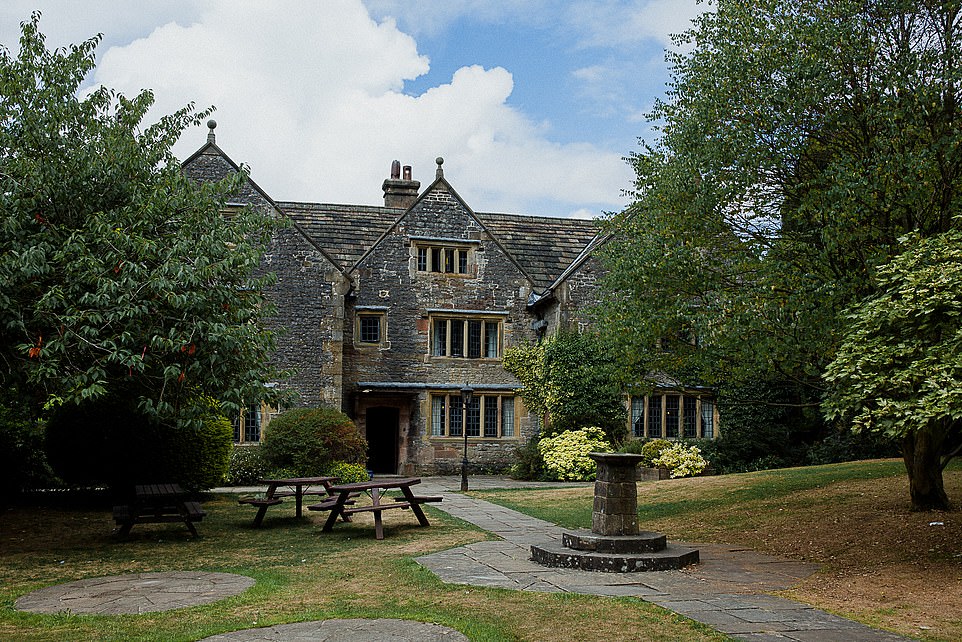 Apart from safety measures – the communal areas are closed and dorms had been converted into single-family rooms – they were up and running almost as normal, according to the website.

And although a youth hostel isn’t quite the same without a game of chess with random German hikers of an evening, the list of Covid safety measures was actually quite reassuring.

Better still, they were hugely affordable, with five-person rooms going for as little as £39 per room per night. Yes, you read that right. And at the time of writing, there are still vacancies. 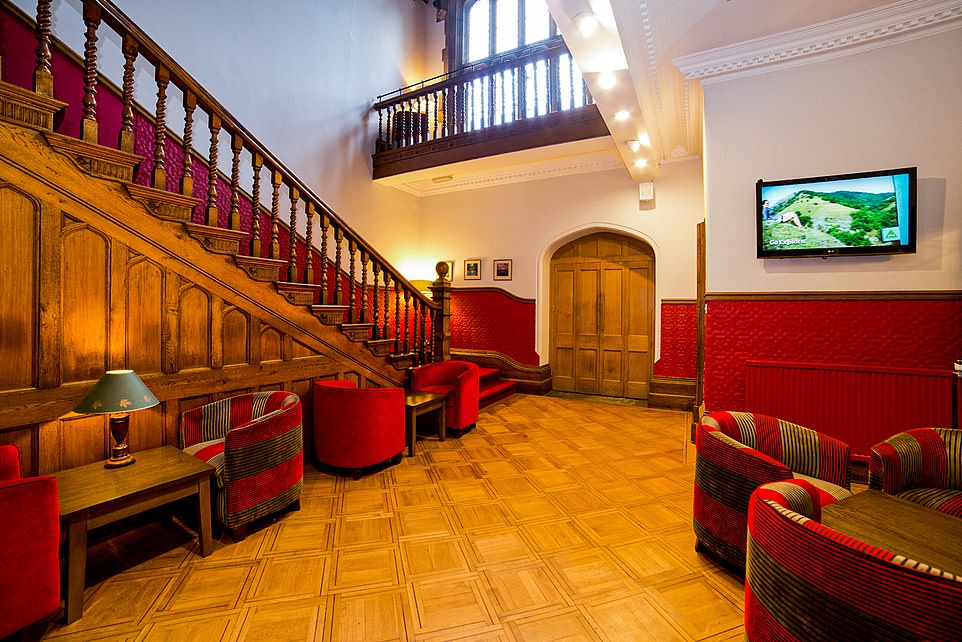 The stunning interior of YHA Castleton, a refurbished Gothic mansion set in 27 acres of parkland in the very bosom of the Peak District National Park 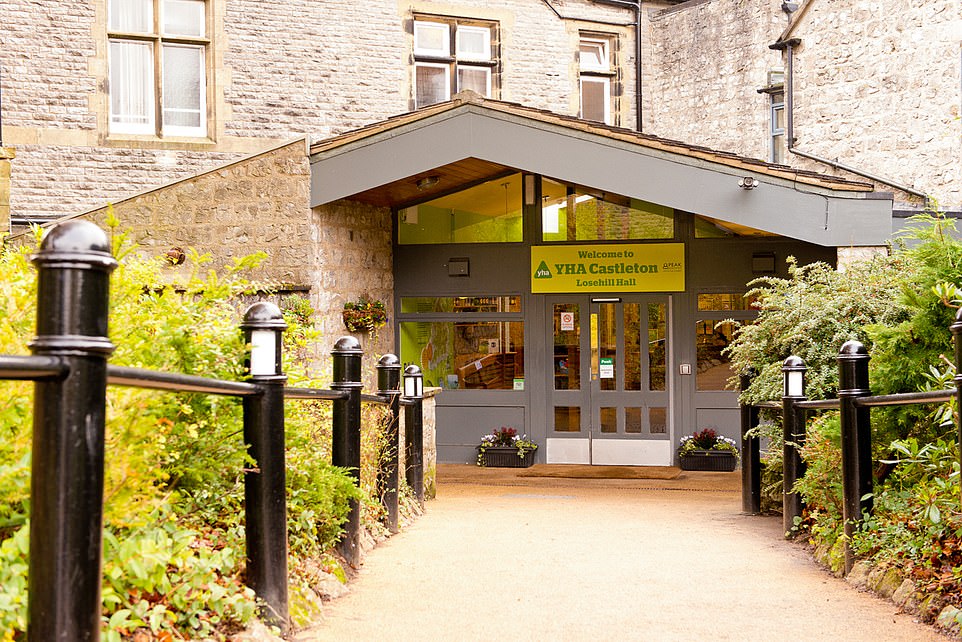 The entrance to YHA Castleton. Because of the pandemic, each room there has been allocated its own bathroom as standard 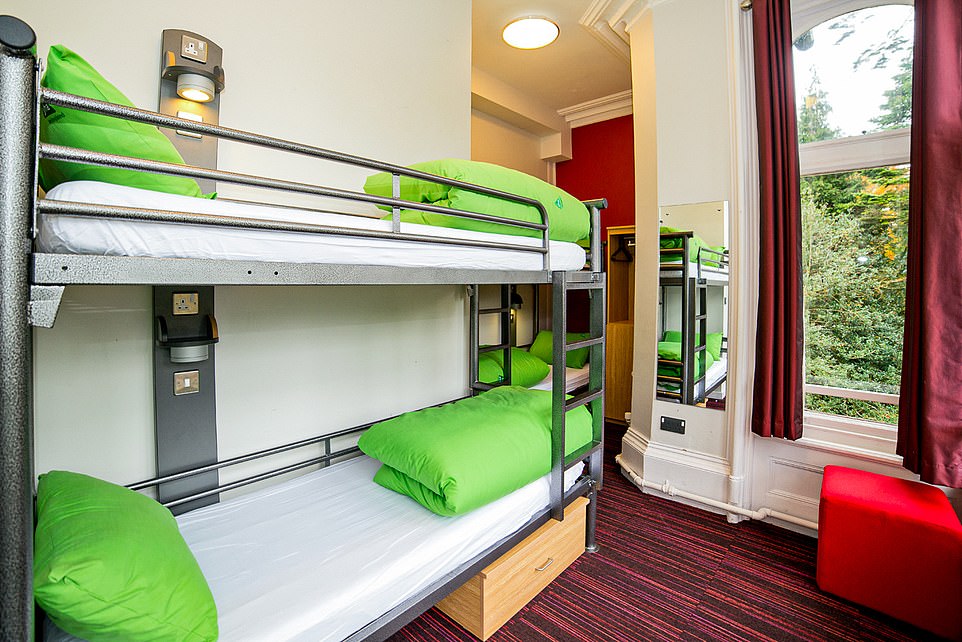 The accommodation at YHA Castleton, says Jake, was ‘clean but basic, with metal bunk beds, thin pillows and bed linen in racing green’

So it was that one bright morning, with the sun shining promisingly and the kids – my 12-year-old daughter and 10-year-old twins – in the back seat, I attempted to top up the oil in the car and fumbled the keys into the maw of the engine.

That little episode, which precipitated a bike ride to the local garage, a temporary oil cap and a £20 backhander to a mechanic, added a couple of hours onto our departure time.

Despite this hiccup, the mid-afternoon found us rolling down the driveway of Losehill Hall, or YHA Castleton, a refurbished Gothic mansion set in 27 acres of parkland in the very bosom of the Peak District National Park.

As you’d expect from a hostel, the accommodation was clean but basic: metal bunk beds, thin pillows and bed linen in racing green. But because of the pandemic, each room had been allocated its own bathroom as standard. 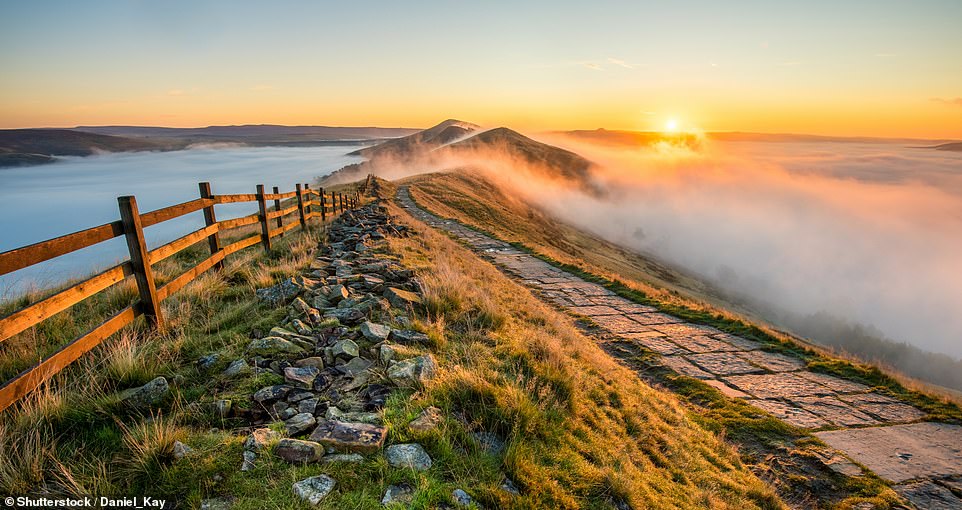 Mam Tor (pictured), explains visitpeakdistrict.com, has a number of caverns just below it, such as Treak Cliff Cavern, Blue John Cavern, Speedwell Cavern and Peak Cavern 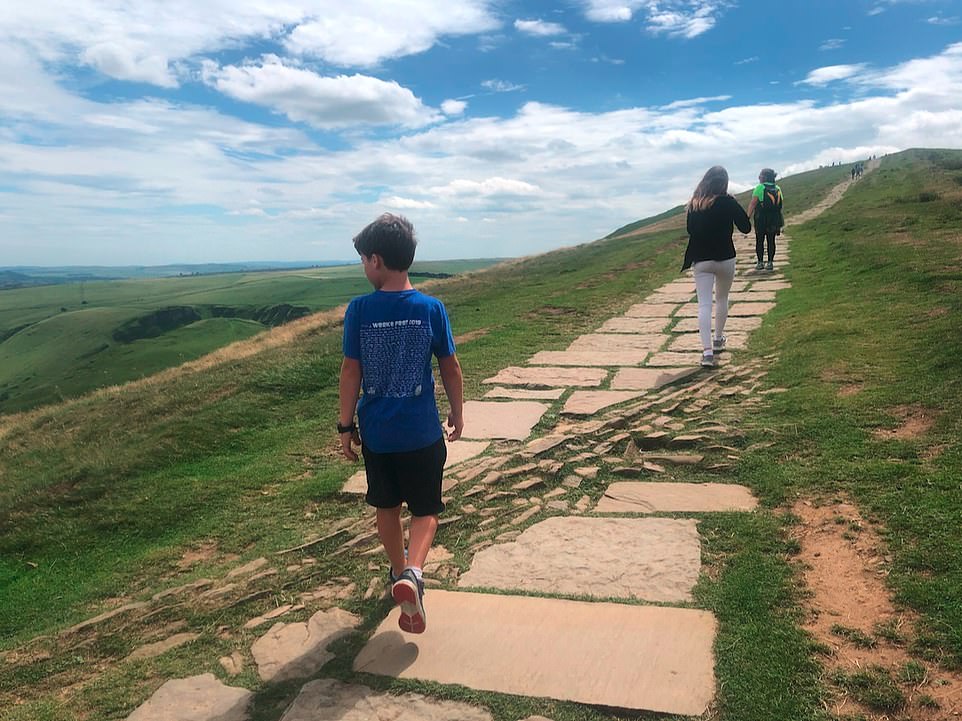 Hiking up to Mam Tor in the heart of the Peak District, which offers panoramic views 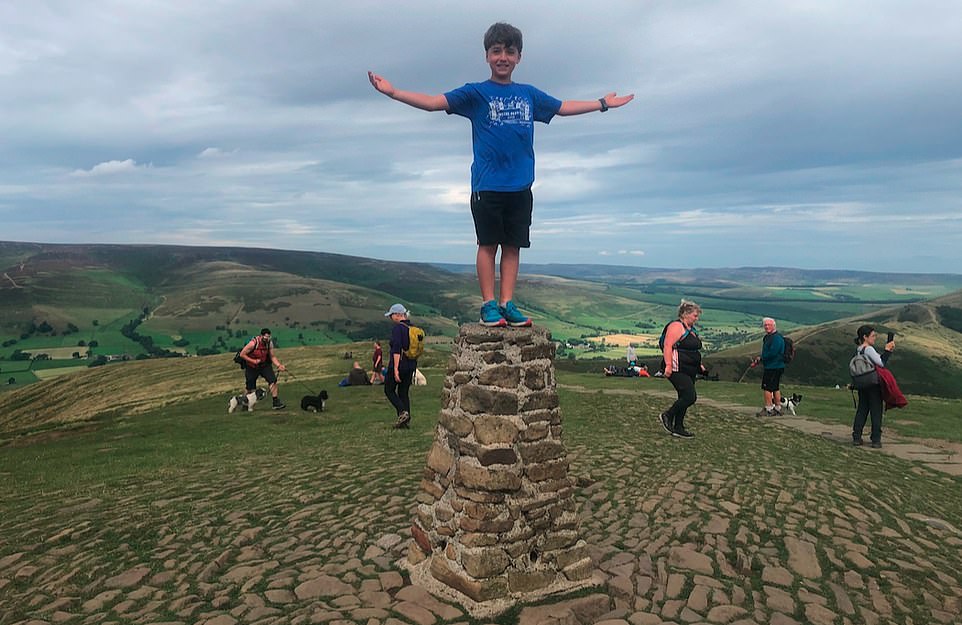 Mam Tor offers sublime views of the Peak District, and is understandably popular with hikers 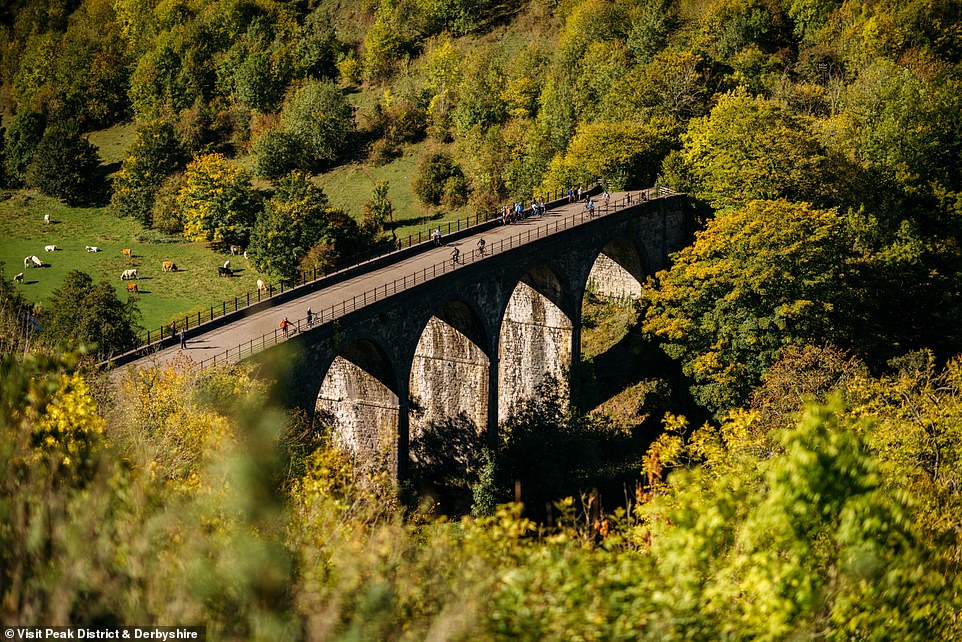 This bridge forms part of the Monsal Trail, a former railway route now converted for cyclists and walkers 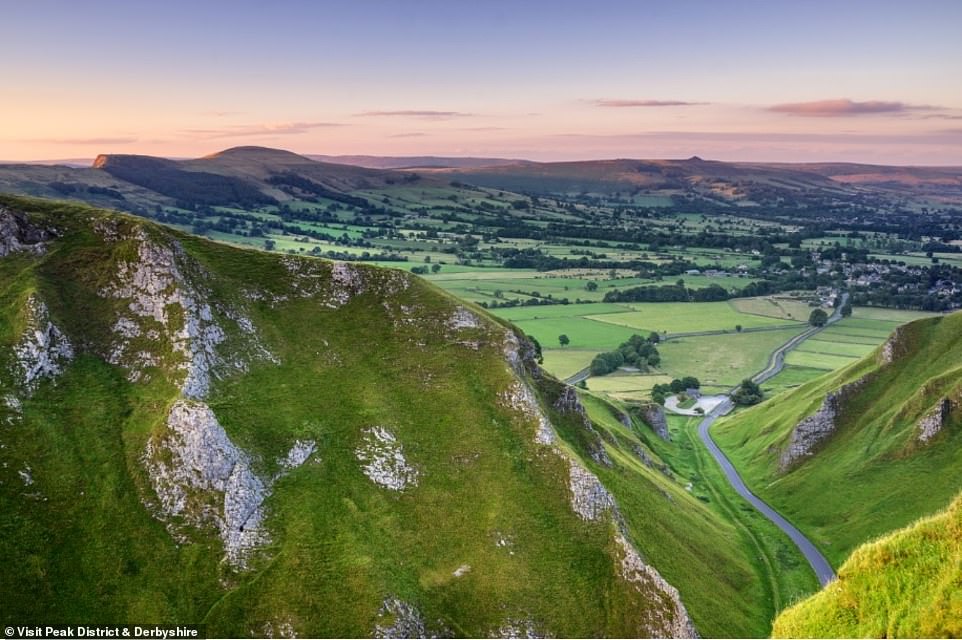 Winnats Pass near Castleton, which runs through a highly photogenic limestone gorge 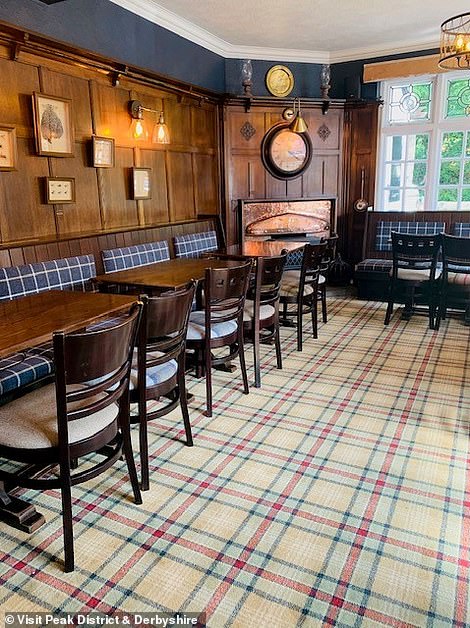 The grounds of the hostel were stunning, with the welcome addition of a goat pen and pigsty hidden away in the woodland for the children to discover.

The Peak District has long had a special place in English literary culture. It is thought that Jane Austen wrote Pride and Prejudice in Bakewell, and Charlotte Brontë likely set Jayne Eyre in Hathersage, which she visited.

Even the Enlightenment philosopher Thomas Hobbes, who is not known as a bundle of fun, had a special affection for the region, dubbing it ‘th’ English Alps’.

He was spot-on. Much of the landscape found in the Peak District has changed little since he coined the term in 1636, and it is nothing short of sublime.

We dined that first evening at the Scotsman’s Pack Country Inn in Hathersage, a 10-minute drive away, which boasted attentive staff, a secluded beer garden and a lovely tinkling brook outside.

The pub had achieved a good balance of safety and comfort, introducing effective precautions while retaining the character of the place. And the food – hearty fare with a posh twist – was just what the doctor ordered, so to speak.

Next day, we corralled the kids out the door and set off for a 10-mile hike up to nearby Mam Tor, a 1,696ft-high vantage point on the top of a ridge with panoramic views over the Peaks.

Predictably, it was an effort to convince the kids to take on the final steep section of the climb. But after a pensioner proudly pedalled past us on a high-spec mountain bike, they caved in and up we went.

At the summit we feasted on a sumptuous packed lunch, collected earlier from the well-loved Three Roofs Café in Castleton, which has adapted to coronavirus by introducing a picnic service.

My daughter is intolerant of dairy and her diet was easily catered for by the café, as was her sister’s vegetarianism. 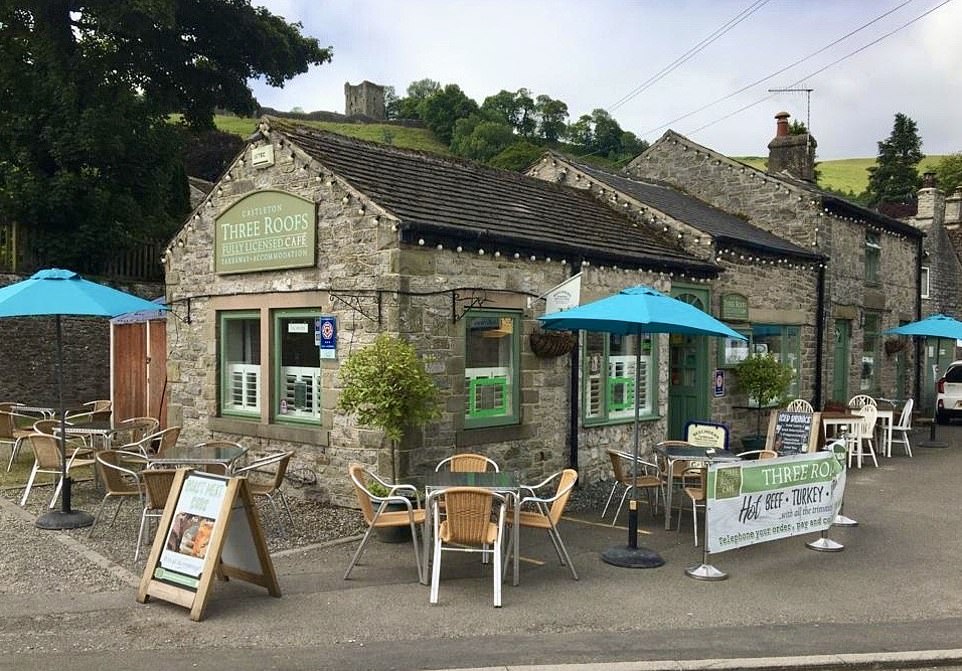 After lunch, it was just a short walk to Treak Cliff Cavern. This network of catacombs, which is still a working mine, is located in Castleton, the only place in the world where a semi-precious stone called Blue John is found.

It was an extraordinary thing to admire purple stalagmites and blue-veined rock in cold caves beneath the Derbyshire countryside.

Like the café, the family-run mine has risen to the challenges of Covid, developing an app that guides visitors through the caves via their phones, without the need for a human expert.

One of the benefits of youth-hostelling in a national park is that there are often several to choose from, which enables a mini-tour.

We would have liked to have strung several together, travelling between them by bicycle, but the last-minute nature of the trip meant that we had come sans vélos.

So we contented ourselves with one change of scene and a transfer by car. After two nights in Castleton, we packed up and moved to the YHA Hartington Hall, about 20 miles south.

It was well worth it. An unrecognised joy of youth-hostelling is discovering the architectural gems that glitter modestly in the YHA crown. The landpods in the grounds of YHA Hartington, which have retractable roofs 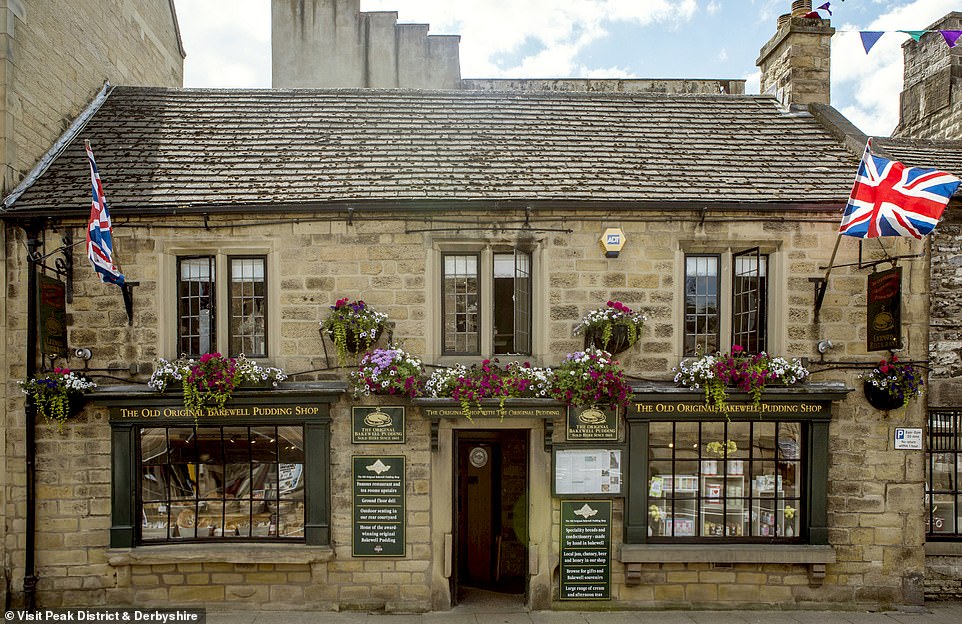 The Old Original Bakewell Pudding Shop, one of the places claiming to have invented the dish 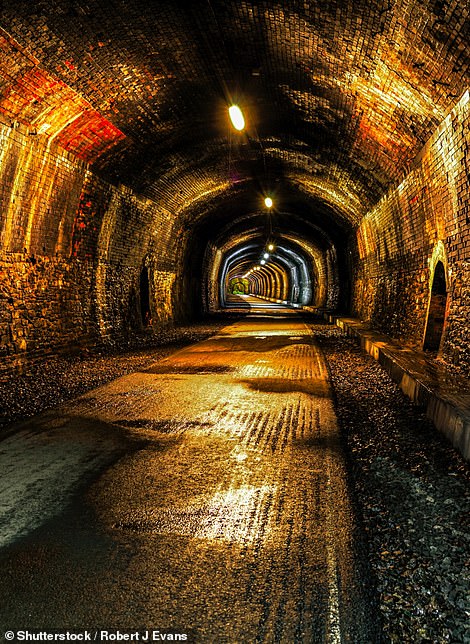 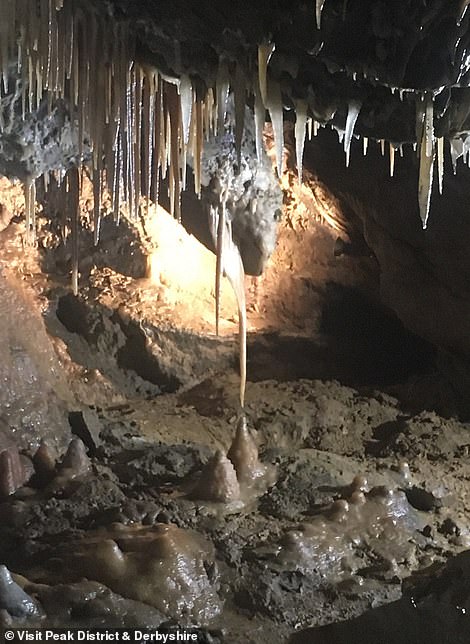 Pictured left is a tunnel on the Monsal Trail. On the right are some of the extraordinary stalactites found in the catacombs of Treak Cliff Cavern 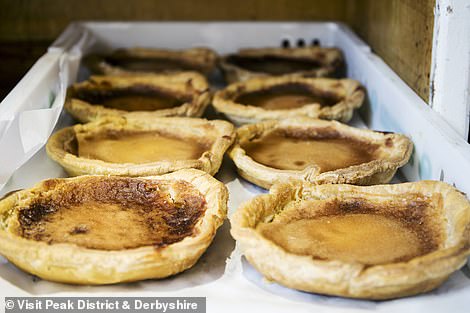 Hartington – a 17th-century manor house that claims to have once hosted Bonnie Prince Charlie – is one of these. We stayed in the house itself for the first night, then transferred into a ‘landpod’, a kind of semi-permanent tent, for the second.

The roof was retractable, meaning that in theory you could sleep under the stars. In practice, this didn’t seem a good idea, given the fact that we’d been in and out of raincoats all day. Nevertheless, the landpod introduced a welcome element of fun and adventure. Though I’d recommend keeping your children away from baked beans for a couple of days beforehand (for God’s sake, don’t repeat our mistake).

The property had the advantage of being located near the jaw-dropping Chatsworth House, otherwise known as Britain’s favourite country house, described by Daniel Defoe in 1726 as a ‘wonder of art’, and one of the few saving graces of the Peak District, which he inexplicably deplored.

We visited on a blisteringly hot day. The house turned out to be more of a palace, stuffed with works of art spanning 4,000 years, from the ancient Egyptians to Lucian Freud, and offering 25 lavish rooms to explore.

The grounds were equally spectacular. We went for a stroll, enjoying the sprayback from the 300ft Emperor Fountain, cooling ourselves in the 18th-century grotto, and paddling with ice-creams in the imposing, serried cascade.

The following day we got our fix of cycling on the Monsal Trail, a disused railway track that has been converted into an un-hilly walking and biking route, complete with four eerie tunnels.

We hired the bicycles at lovely Hassop Station, which is located right on the trail and also houses a very good café and book shop for pre or post-ride meals and drinks.

Last but by no means – by no means! – least, no visit to the region would be complete without sampling a genuine Bakewell pudding, which we accomplished in Bakewell itself.

Forget Mr Kipling. He never existed anyway. In the Peak District there are two things: the Bakewell tart, with its familiar white icing with brown feathered lines, and the Bakewell pudding, which nobody has ever heard of. Both are served with custard.

We tried the dishes at Old Original Bakewell Pudding Shop, which is one of a handful of places that claim to have invented the pudding, after lunch under the wooden beams of its upstairs restaurant.

Lunch, by the way, was hearty and good. I was man enough, or perhaps mad enough, to attempt the house signature dish, the Famous Blacksmith’s Skillett. 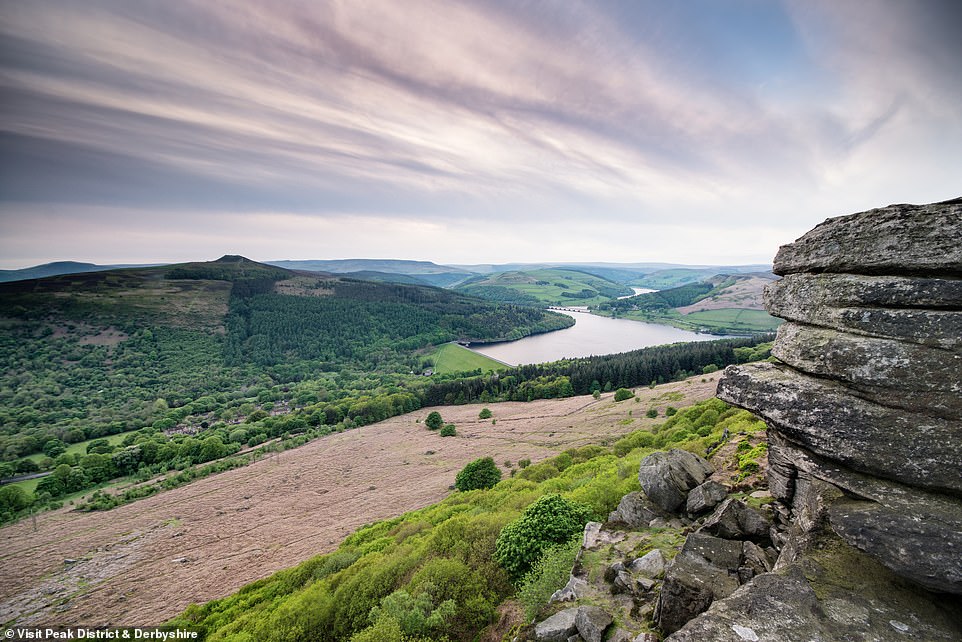 Bamford Edge, with a view to Ladybower Reservoir. This is one of the many amazing walking areas in the Peak District 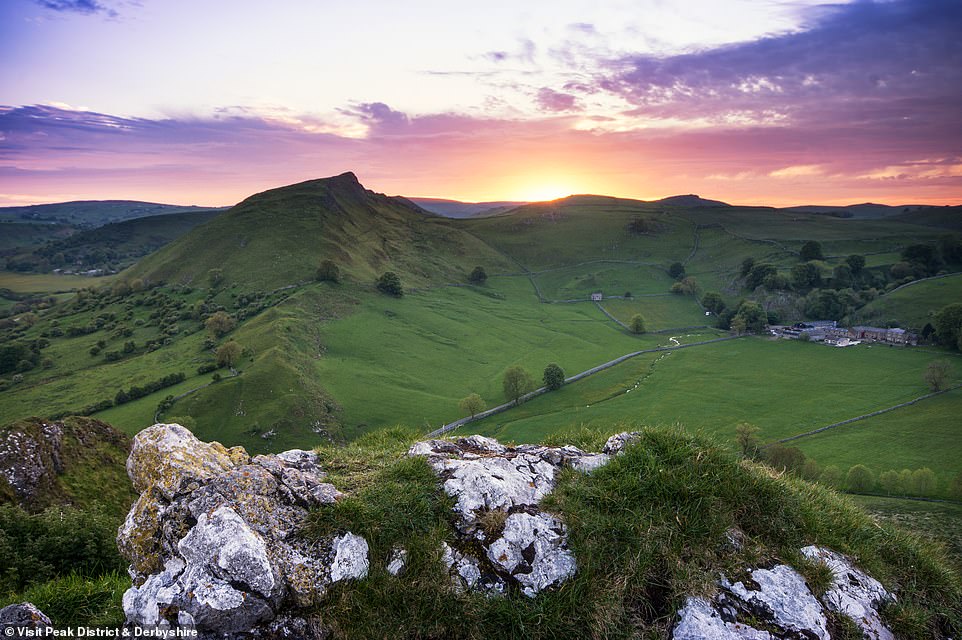 This image shows Chrome Hill, also known as the ‘Dragon’s Back’ on account of its rugged spine

This mélange of black pudding, bacon, onions and mushrooms in a peppercorn sauce was not for the faint-hearted. But then, I am not faint-hearted. It was filling, peppery and delicious, and I swabbed the last streaks of sauce with a chip.

When it came, the pudding was brown and dipped, cooked on puff pastry rather than shortcrust. Folklore has it that the dish was invented by accident when a local cook messed up the recipe for a jam tart.

It was pleasant enough. But without wanting to offend Bakewellers (Bakewelites? Bakewelians?), it didn’t capture my heart. Not so the tart, which we tried next: if heaven was sticky and almondy and wildly calorific, this would be it.

You must try both, of course, having burnt off sufficient calories on a long hike. But to miss the tart would be unforgivable. Oh, and book your hostel soon. They too are selling like hot cakes.

Landpods and bell tents at Hartington Hall start at £49 per room per night, subject to availability.

A guide to easy-peasy mountaineering around the world

Secret Britain: an ancient timeline through the landscape | Mary-Ann Ochota