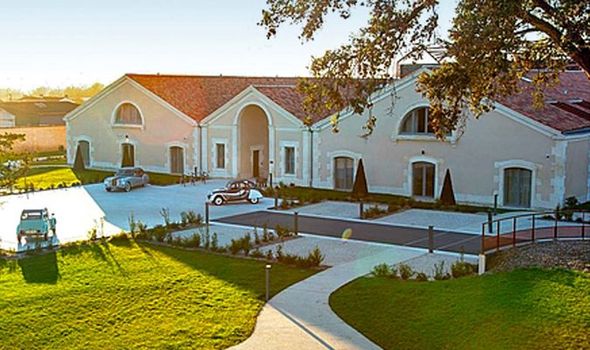 At first glance, my arrival at the Hotel Chais Monnet and Spa doesn’t appear to be particularly welcoming. Thick imposing walls conceal what was once a 19th-century trading house and cellars owned by Jean-Gabriel Monnet in 1898. Once you’ve swept through the gates, you’ve entered an immaculately landscaped garden of lawn and ornamental grasses overlooked by two grand mansions – one a classified monument. Beyond sit two arresting, contemporary glass square structures adorned with steel tendrils which resemble vines.

As a reminder you’re in France, two pristine iconic Citroen 2CVs (which guests can use to pootle around the vineyards) sit at the entrance.

About a 90-minute train ride away from Bordeaux or La Rochelle, sitting just outside the town, the property is now in the capable hands of Javad Marandi (owner of celebrity hangout Soho Farmhouse in the Cotswolds). He enlisted architect Didier Poignant to transform this industrial estate into a luxury hotel which opened in 2018.

Most of the 92 rooms are reached via the vast glass atrium with original beams, a circular-glass elevator and a sweeping Hollywood-style staircase. It’s all been sensitively designed around the old structures and decorated with dramatic modern sculptural pieces. Despite its slick appearance, Chais Monnet is sublimely relaxing.

Perhaps it’s the light streaming through the glass roof, the incredibly discreet staff who hover silently, appearing just when you need them, or the pure joy of being in this quintessential part of rural France, but it’s a heady combination.

Rooms come in four categories. There’s also an additional four apartments for larger groups and a beautiful suite. All typify French elegance and come in the colours of the Cognac ageing process – from warming ambers to deep tobacco tones.

Rooms are sophisticated and cosy sanctuaries with little outdoor seating areas. There are cupboards galore, beautiful sofas and chairs, mini bars, even monogrammed writing paper. Nothing has been overlooked and the luxurious bathrooms come with toiletries from Grasse perfumer, Fragonard.

You’ll be dizzy before you even try a sip of one of the 220 different Cognacs on the elevated bar in Le 1838, the former cooperage. It has a gentlemen’s club-meets grandcountry-house vibe with chesterfields, brass instruments and cowskincovered ottomans.

If the weather’s fine, there’s also a rooftop bar with sweeping views across town. Chais Monnet’s fine-dining restaurant, Les Foudres, has just been awarded a Michelin star and this year, for the first time outside Paris, the Michelin guide will be launched in Cognac. That’s some recognition.

A taster of the menu includes artichoke cream ravioli, line-caught wild turbot and veal cooked in a crust of bread. The five-course tasting menu costs €135.

For something a little more relaxed, La Distillery, with its heavily beamed roof, wooden tables and tiled floors, offers all the French classics, from snails and oysters, to steaks, duck and guinea fowl. Starters from €14, mains, €22. And for a quick pick-me-up after touring the Cognac distillers, the Angelique cafe does a wicked afternoon tea served by the utterly charming Brit, David.

Housed in one of the glass buildings, begin your wellness journey in the spa either in the inviting indoor/outdoor pool, Jacuzzi or the array of “shower experiences” which includes a tranquil waterfall complete with tropical birdsong and warm waters, before the heavens open and a monster storm with lightning and thunder rains down. Five rooms offer everything from salt scrubs to deep massages. If you fancy something more intense, there’s a gym with all you need. Body exfoliation from €130.

THE DEAL: Double rooms at Chais Monnet Hotel & Spa start from £220, room only, chaismonnethotel.com. Excursions can be aranged via the hotel.

More to see and do

There’s so much more to Cognac than Cognac. Here’s a taster of things and places not to miss: