The first internationally branded hotel has opened in the Faroe Islands.

A Hilton Garden Inn in Torshavn, the capital of the island of Streymoy – known for its grass-roofed buildings – is now welcoming guests.

Many of its 130 rooms offer ‘scenic views of the Islands’ beautiful natural surroundings’ and facilities include one of the Islands’ first wellness centres – boasting a sauna, an outdoor hot tub and a 24-hour fitness centre – as well as five meeting rooms with enough space to host up to 250 attendees. 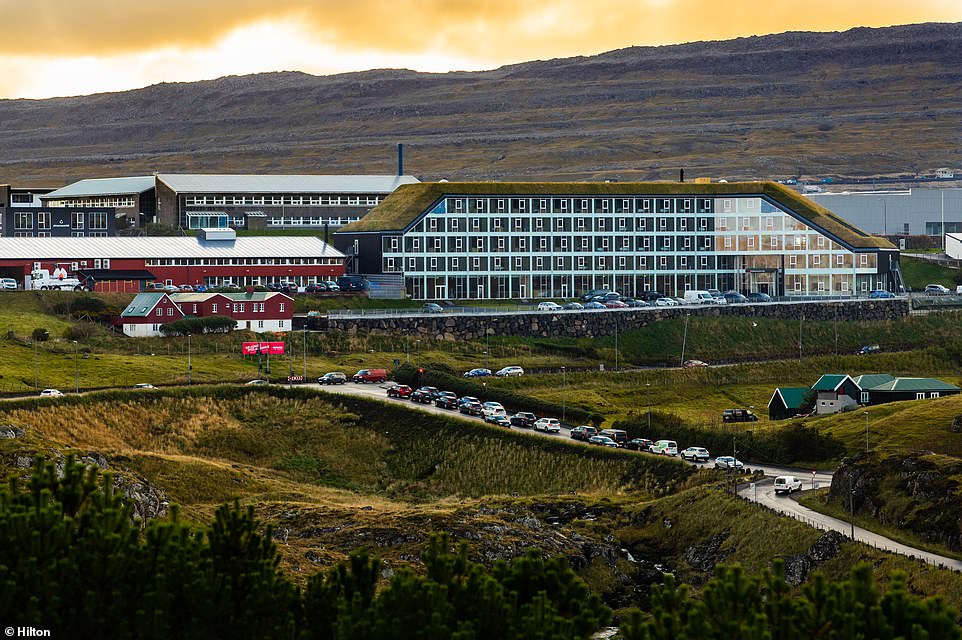 The Hilton Garden Inn Faroe Islands, which is the first internationally branded hotel to open in the archipelago 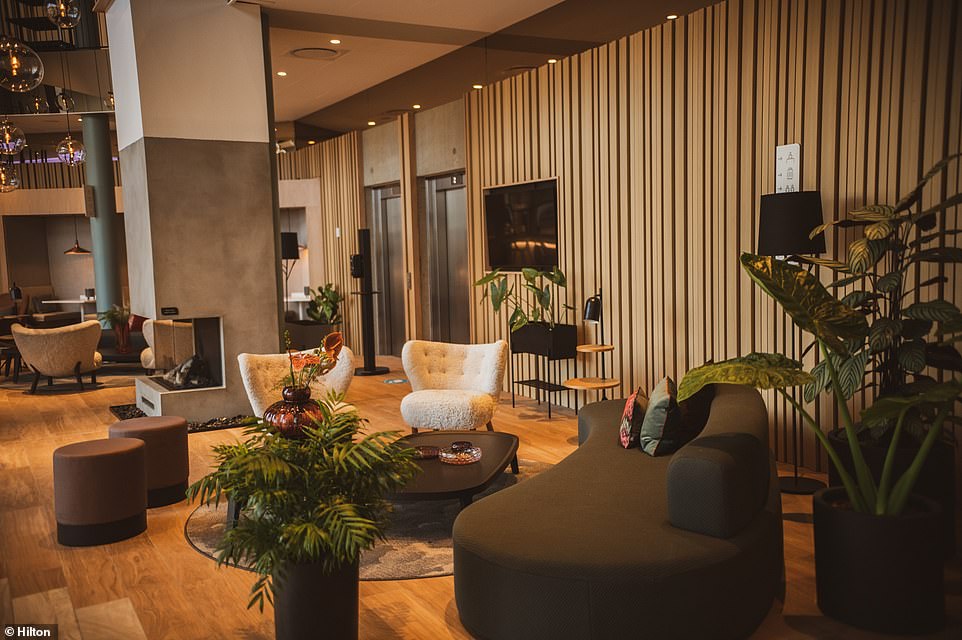 Hilton said its new hotel in the Faroe Islands is only five minutes from the beautiful Svartafoss Waterfall, the Nordic House and the National Museum. Pictured is the hotel’s lobby 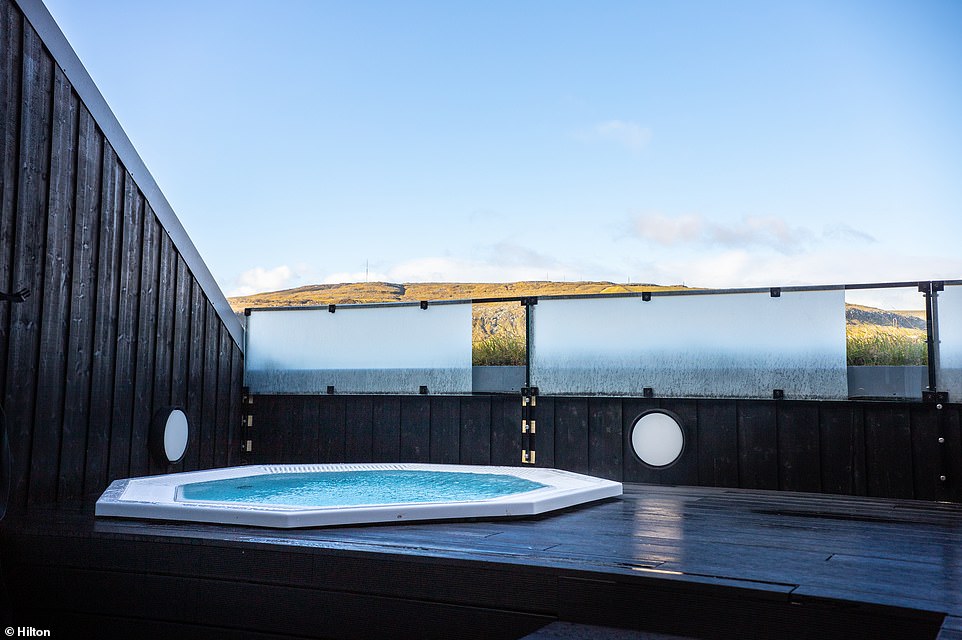 The new hotel has one of the Islands’ first wellness facilities – boasting a sauna, an outdoor hot tub (pictured) and a 24-hour fitness centre 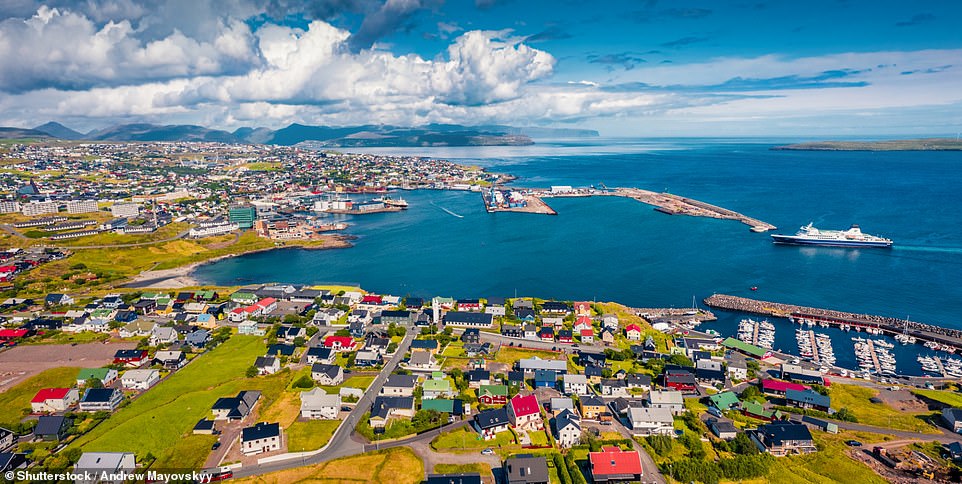 Hilton Garden Inn Faroe Islands is located in Torshavn, pictured, the capital of the island of Streymoy

The Faroe Islands is an archipelago of 18 mountainous isles in the North Atlantic Ocean that have unrivalled natural beauty along with a ‘thriving music scene and a rich, growing gastronomical culture’.

Hilton said its new hotel is only five minutes from the beautiful Svartafoss Waterfall, the Nordic House and the National Museum and that it will offer ‘the perfect escape for adventure lovers looking to explore off the beaten track’.

The company said that Hilton Garden Inn Faroe Islands has been built with ‘sustainability at its core’ to help grow ‘sustainable, responsible tourism’.

For example, it said that the heating system uses energy from a local power plant, which ‘captures leftover energy from a range of industries, including turning waste from the Islands’ thriving salmon fishing industry into energy’. 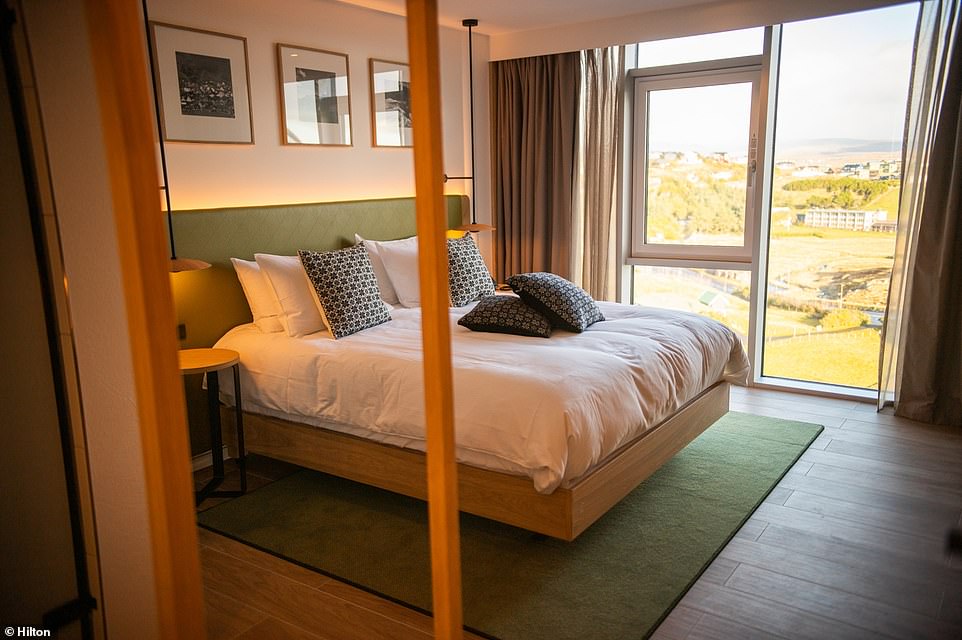 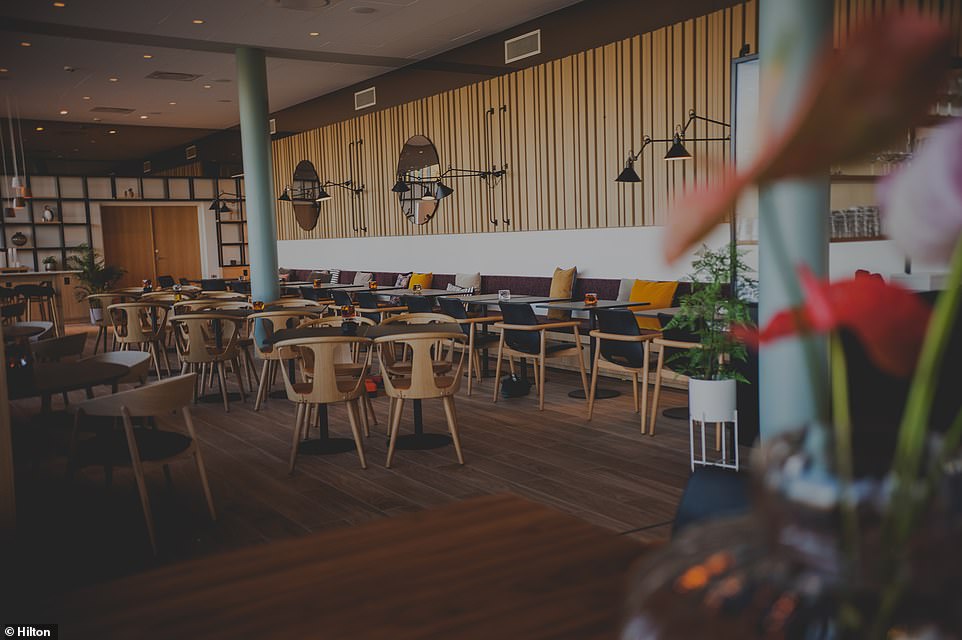 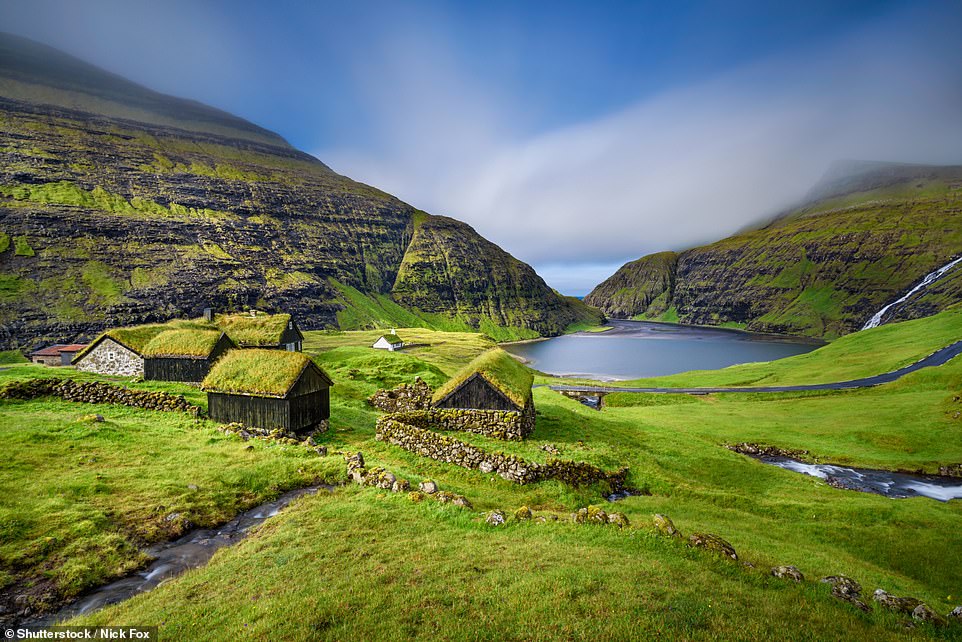 Streymoy island is known for its 1,600ft cliffs – and having rather a lot of grass, some of which has been commandeered by the locals to use on roofs. These houses are in Saksun 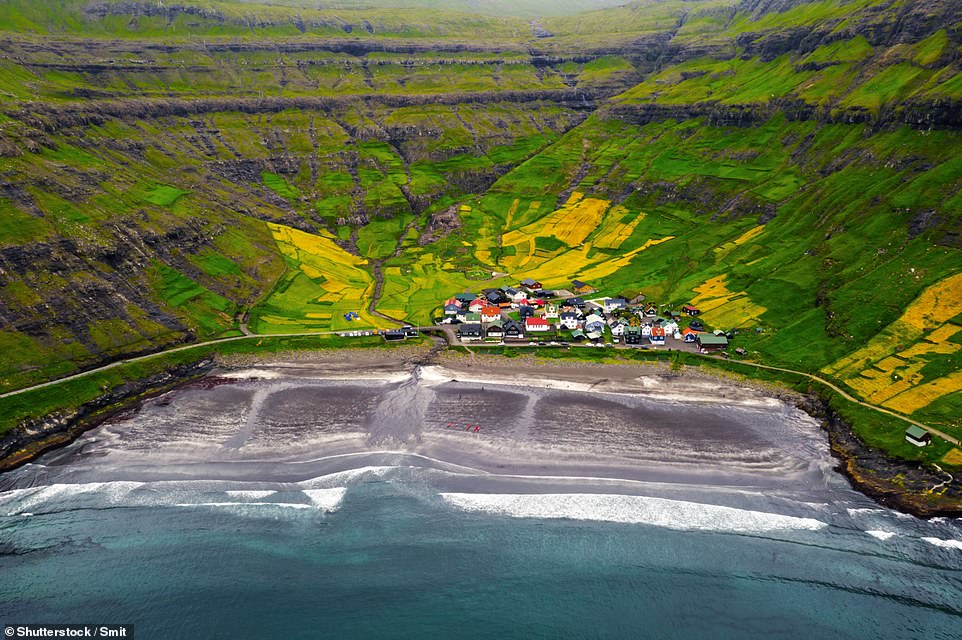 A jaw-dropping drone image of Tjornuvik beach on Streymoy. This is a very popular surfing spot

In the rooms, there are water-saving showers and motion-sensor taps to ‘minimise water waste throughout the property’.

Electrical solutions such as LED lights and intelligent lighting with motion sensors have also been installed to further reduce the amount of energy consumed, said Hilton.

Meat, fish and vegetables for the hotel are all sourced from local suppliers, and Hilton added that while the climate and soil of the Faroe Islands do not lend well to agriculture, many crops are grown locally using polytunnels and will be used by the hotel’s chefs to create seasonal dishes.

Guests can eat at Hallartún, a French bistro-style restaurant headed by chef Jakup Sumberg, who built his career in the kitchens of ‘prestigious restaurants’ in Denmark and Sweden. 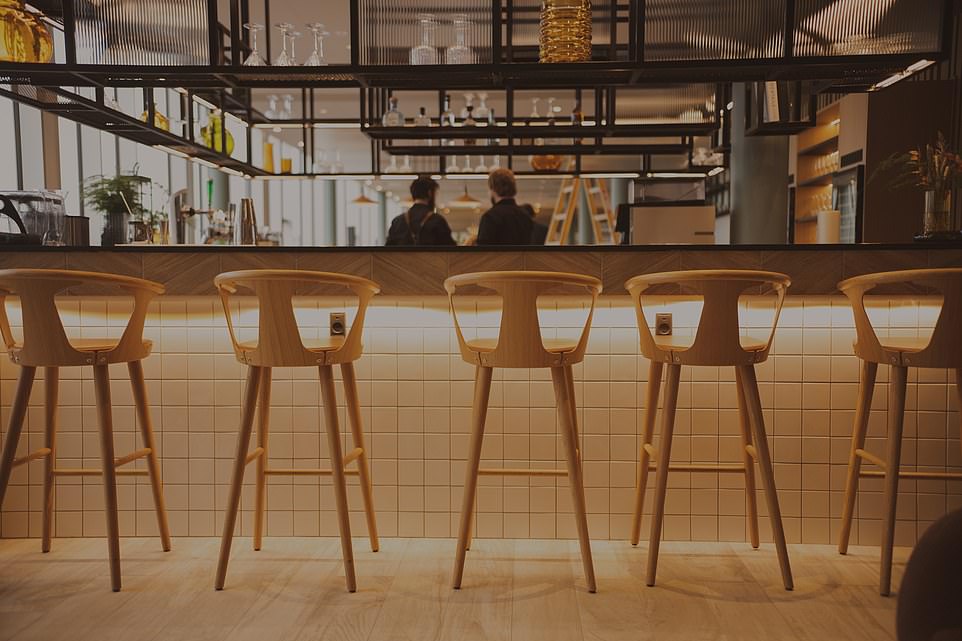 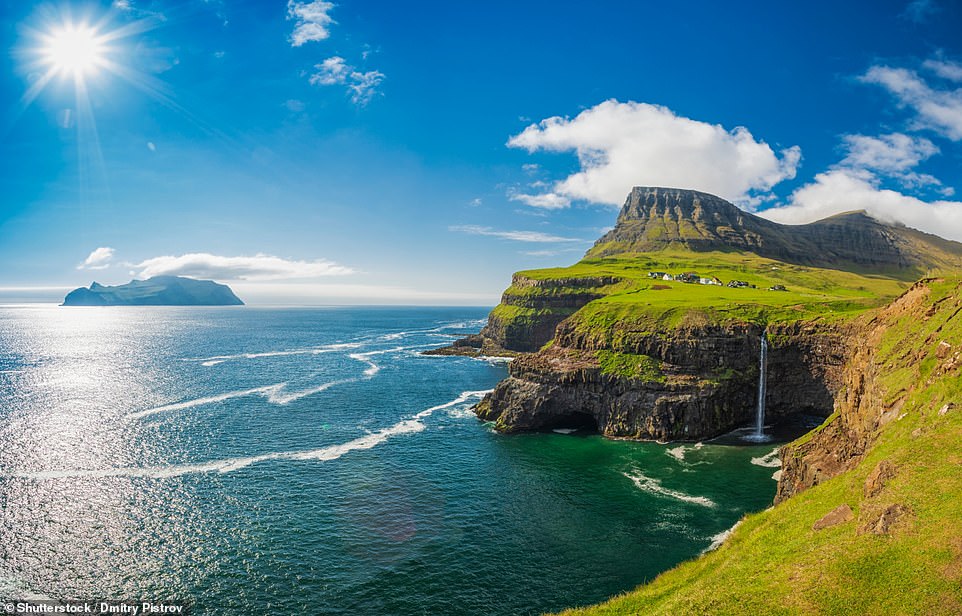 The Faroe Islands is an archipelago of 18 mountainous isles. Pictured is Gasadalur village and the Mulafossur Waterfall on the island of Vagar

According to Hilton, Sumberg later moved to the Faroe Islands, where he has built ‘extensive experience working with the abundance of local, seasonal produce that the Islands have to offer’.

It added: ‘Hallartún boasts stunning views and a menu packed with freshly prepared, locally sourced dishes, making the most of the island’s plentiful supply of livestock and fresh fish straight from the North Atlantic.’

The hotel also has a store called The Shop, which is open 24 hours for ‘on-the-go guests seeking locally sourced sweet and savoury snacks, beverages and ready-to-cook meals’.

In addition, Hilton said, the new property will be part of its Hilton CleanStay programme, which ‘delivers a new standard of cleanliness and disinfection across all of Hilton’s hotels globally’.

These standards include a ‘Hilton CleanStay Room Seal to indicate that a room has not been accessed since being thoroughly cleaned and disinfected, increased frequency of cleaning of all public areas and flexible housekeeping options’. 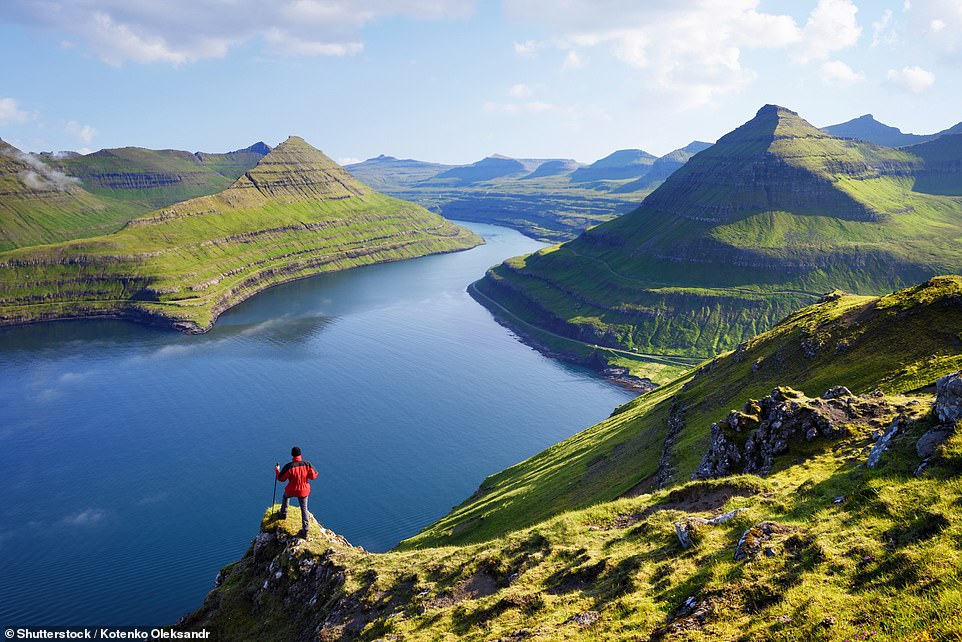 According to Hilton, the Faroe Islands have unrivalled natural beauty along with a ‘thriving music scene and a rich, growing gastronomical culture’. Pictured is Funningur fjord on Eysturoy Island

‘As a pioneer of the hospitality industry, Hilton has a long legacy of opening up new destinations in a sustainable manner, and this hotel will be no exception. We look forward to welcoming guests to this incredible property.’

Alan Roberts, Global Head of Hilton Garden Inn, added: ‘We are proud to unveil our latest hotel in the beautiful and vibrant Faroe Islands, offering our upscale yet affordable accommodation to travellers from all over the world.

‘The opening of Hilton Garden Inn Faroe Islands signifies the latest market debut for the brand, which is growing rapidly and continues to extend Hilton’s renowned hospitality to new and exciting destinations around the globe.’

Rooms at the Hilton Garden Inn Faroe Islands start at £70.

Currently, Britons must have a ‘worthy’ purpose to enter the Faroe Islands. They must also present proof of a negative Covid-19 test, taken no more than 72 hours before entry.