Home » Travel » Great British Boltholes: A review of the Kingham Plough in Oxfordshire

In 2012, the phrase ‘Chipping Norton Set’ was included in Brewer’s Dictionary Of Phrase And Fable, and anyone interested in this influential assortment of politicians, musicians, media types and movers-and-shakers based in the Cotswolds should head straight for the village of Kingham.

At the bar of the lovely Kingham Plough, rumours abound of members of the set who have popped in recently: former Prime Minister David Cameron and wife Samantha, The Grand Tour’s Jeremy Clarkson and Great British Bake Off judge Prue Leith.

But it’s not just the great and the good who drop by. At the end of the working day (and sometimes earlier), farmers and villagers gather to enjoy a tipple and gossip, and sometimes free bar snacks such as bowls of chips, roast potatoes and sausages. 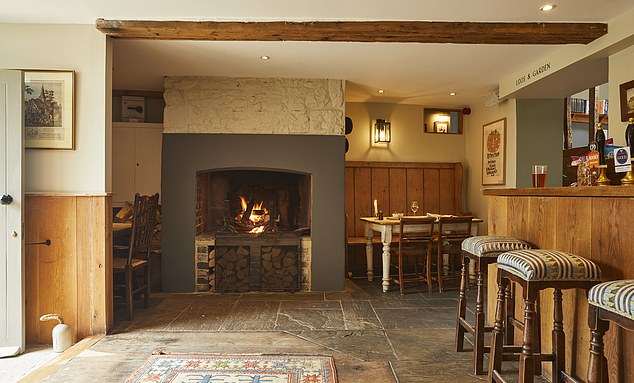 The cosy bar area at the Kingham Plough in Oxfordshire, which has been frequented by a number of famous faces including the former Prime Minister David Cameron, The Grand Tour’s Jeremy Clarkson and Great British Bake Off judge Prue Leith

The Kingham Plough has just been taken over by Matt and Katie Beamish, an ebullient couple who have between them worked with culinary maestros aplenty, including Raymond Blanc, Fergus Henderson and Jamie Oliver.

‘Good beer, good atmosphere, smile at people – it’s not rocket science,’ says Matt, summing up his approach to the pub, which also has six rooms.

The restaurant, previously overseen by the Plough’s ex-chef patron Emily Watkins, a former Great British Menu winner, has just been given a Good Food Award for Gastro Pubs (goodgastropubaward.com).

The USP: This village pub has a bit of zing. Expect pop music and soul, signed prints by Damien Hirst and Salvador Dali no less, chatter reverberating beneath low beams, crackling open fires and plenty of dog-walkers (dogs are given free biscuits). 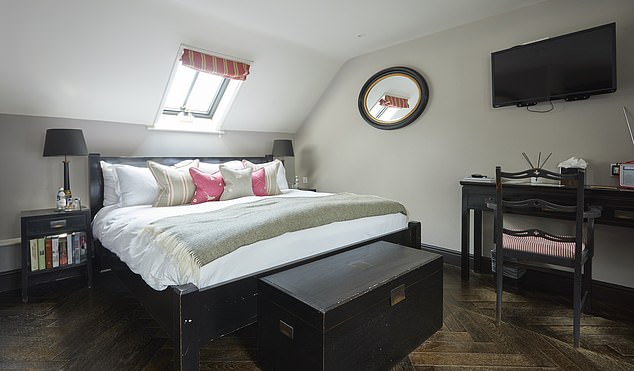 Elegant: One of the six rooms at the Kingham Plough, which are spread across the main building and an annexe

The rooms: Six comfortable rooms are a cut above average, spread across the main building and an annexe. Vibrant colours mixed with neutral hues, antiques, the odd splash of art, and bathrooms with good-quality Bramley products are the order of the day. Tea and coffee are taken care of along with freshly baked cookies. If you fancy more space, the two rooms in the annexe are the largest, with skylights, super-king beds and, in room six, a decadent roll-top bath.

B&B doubles at the Kingham Plough in Kingham, Oxfordshire, cost from £145 a night. For more information visit (thekinghamplough.co.uk).