Home » Travel » Flights: Insiders suggest ‘toxic’ threat from the air we breathe onboard – how safe is it?

Fume events may not be something passengers have even heard of let alone are concerned about, however, a series of recent claims has revealed that toxic air on board flights could be posing a major risk to those on board. The news comes following a series of allegations surrounding the air safety on board certain flights.

Speaking on BBC news this morning Mike Powell, Presenter of BBC File on 4, explained: “Fume events have been around since the 1950s.

“Its because the air that we breathe onboard aircraft comes through the engine, it’s called a bleed air system.

“The problem with that is that the air picks up all manner of chemicals, sometimes from the engine oil, called organophosphate.

“Now, the fume event can either be long term exposure; cabin crew and pilots have been warning that they are affected by that. Or there is the fume event where you see smoke, or you smell smelly socks, ozone, or nail bar types of smell.”

Powell revealed that the BBC had gained access to a confidential Air Safety Report from a pilot who was operating a British Airways flight when one of these events took place.

The incident in question took place on January 2 this year, and according to the BBC, caused the pilot landing the plane to pass out. 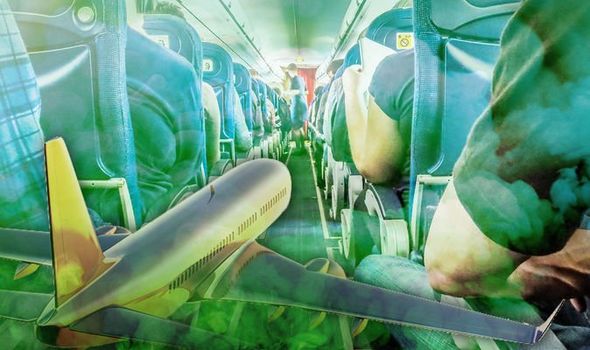 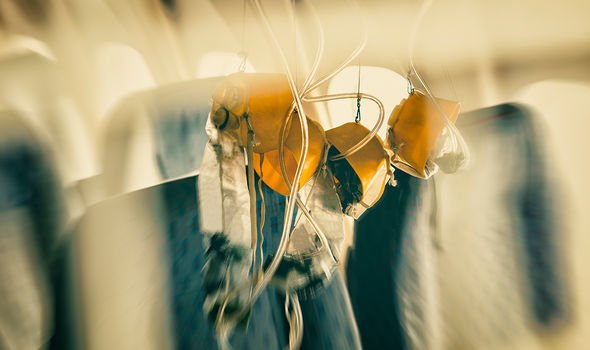 “On one particular fume event on the 2 January this year there was smoke in the cabin and also the smell of smelly socks,” continues Powell.

“The captain has written a confidential report called the ASR, or air safety report, that the BBC has seen. In it, he says that fume event affected his co-pilot.

“Now, the co-pilot was landing the airport and was only seven miles from Heathrow. He describes him as breathing rapidly and his head was dropping forward. He also said he was not really usefully conscious.”

The BBC put these claims to British Airways who said it is not true that the first officer passed out. They suggest he was “feeling unwell” but added that “neither of the pilots in the cockpit say he fainted.”

Additionally, the Civil Aviation Authority told the BBC that an aircraft would never be flown if it posed a health or safety risk.

A British Airways spokesperson told Express.co.uk: “We would never operate an aircraft if we believed it posed any health or safety risk to our customers or crew.

“Research commissioned by the European Aviation Safety Agency concluded that the air quality on board aircraft was similar or better than that observed in normal indoor environments.

“We always work closely with industry manufacturers and regulators, analysing all new information and technologies as they come to market.”

A statement on the CAA’s website reads: “We recognise that there is strong interest in fume events, particularly those that relate to ‘engine bleed air’, which some people have suggested could impact on people’s health. Based on the available data, occurrences relating to engine bleed air are very rare and confirmed incidents form five per cent of the total number of fume event reports we receive each year.

“It is acknowledged that people who experience a fume event (of any type) may report symptoms such as irritation to the eyes, nose and throat. These symptoms usually resolve, however, once the fumes or smell have disappeared.

“A number of studies have been carried out in this area, including Government-commissioned research. Long term ill health due to any toxic effect from cabin air is understood to be unlikely, although such a link cannot be ruled out.”

Furthermore, data from the CAA found that only 49 percent of the occurrences reported by airlines between 1 December 2014 and 30 November 2016 actually related to bleed air.

Express.co.uk has contacted the CAA and the European Union Aviation Safety Agency for further comment on industry regulations and how they monitor flight safety.

However, it seems the risk of bleed air is a fear causing wider concern within the industry and has been for some time.

In a new documentary, currently premiering at Everyman Cinema locations around the UK, Ex-BA pilot Tristan Loraine explores this topic.

He has spent the last 18 years collecting evidence of the danger posed to those on board.

In the documentary, “Everybody Flies”, he used testimonies from crew members and passengers as well as scientific findings to uncover the threat he believes exists.

According to the film summary: “Because the air at high altitudes is too thin to meet our breathing needs, a breathing air supply is needed for passengers and crews.

“On all currently flying commercial jet aircraft (except the Boeing 787), this breathing air supply is taken, unfiltered, from the compression section of the engines in a process known as ‘bleed air’.

“Due to limitations of aircraft engine design, for over 60 years, the aerospace industry has known that this ‘bleed air’ becomes contaminated with toxic chemicals which are produced when the lubricating oils are heated; thus contaminating the ‘bleed air’ (the air we are supplied to breathe) in an unpredictable quantity.”

According to Tristan, “this can happen on all flights” regardless of the airline.

As Tristan previously worked for BA, Express.co.uk approached them for comment. At the time of writing, they have not offered a comment for publication. 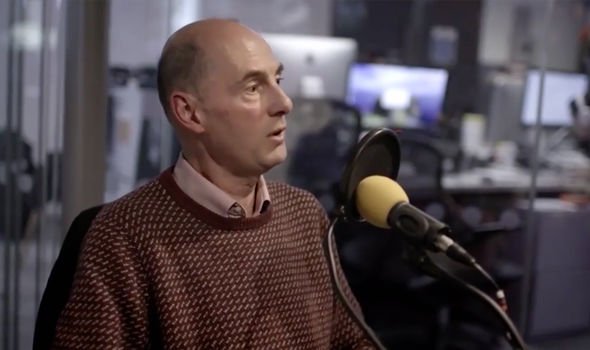 In 2011, an American Airlines cabin crew member filed a lawsuit against Boeing, the manufacturer behind many of the commercial aircraft used by mainstream airlines.

According to The Guardian, she sued the manufacturer on the grounds of faulty aircraft design, which she claimed “leaked toxic fumes into the aircraft and left her unable to work”.

She won the case.

At the time, Boeing said: “Our bleed air systems meet all applicable FAA requirements, and an overwhelming body of scientific evidence confirms the safety of them and the air on board our aeroplanes.”

The manufacturer has since implemented a new “clean air” system on all of its 787 Dreamliner aircraft.

During his documentary, Tristan revealed that cabin crew aren’t always aware of where the air comes from, despite concerns that it could have the potential to be fatal.

According to The Guardian, who wrote a report on the incident in 2017, the initial post-mortem did not reveal a reason for the sudden death.

However, following probing by his family who had been contacted by two aviation experts, it was revealed that Matt had high levels of organophosphate poisoning, one of the many effects of exposure to toxic cabin air, otherwise known as aerotoxic syndrome.

The Guardian writes: “It is a controversial diagnosis, and many in the aviation industry are adamant it doesn’t exist.”

It is important to note there is no sure way to tell if his job was the source of the illness, meanwhile, British Airways said there had been “substantial research into questions around cabin air quality over many years… it has not shown that exposure to potential chemicals in the cabin causes long-term ill health.” 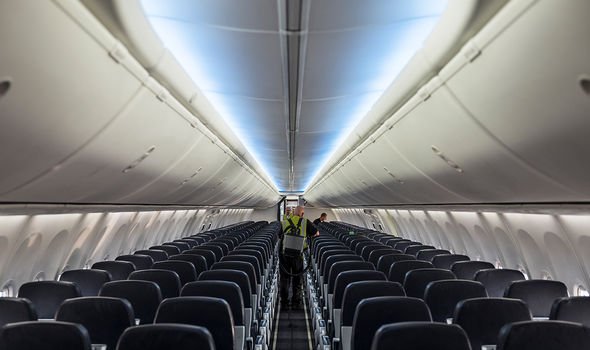 However, as of last year almost 300 “fume events” were reported on BA flights alone last year and almost 100 cases of alleged “aerotoxicity” are being brought against the airline.

Nation-wide, according to the latest figures from the CAA, between December 1, 2014, and November 30, 2016, a total of 1,672 reports relating to fire, fumes, smoke or smells inside the aircraft cabin were reported. Just over half were related to bleed air, the rest were not.

Unite – the union which represents cabin crew – has claimed pilots and crew are exposed to frequent “fume events”, which can lead to deteriorating health and life-threatening conditions.

As of January this year, BA is being sued by nearly 100 staff who allege their health has been impacted by the fumes from the engines on flights.

Express.co.uk has contacted all of the listed airlines for comment on the subject.

Virgin Atlantic responded, saying: “The health, safety and well-being of our passengers and crew is always our priority. As with all British airlines, we operate to the strict regulations and standards set out by the UK CAA and the European Aviation Safety Agency.”

However, Howard Beckett, from Unite, said: “The airline industry cannot continue to hide from the issue of toxic cabin air whilst placing the health and safety of aircrew at risk.’

But a BA spokesman insisted: “Fume or odour events have been found to be caused by a wide range of issues, including burnt food in the oven, aerosols and e-cigarettes, strongly-smelling food in cabin bags, and de-icing fluid.”

Tristan believes that ultimately, it is up to airline bosses and overseeing industry bodies to tackle this issue head-on and ensure all flights offer the same air safety as the Boeing 787 Dreamliner.

In his documentary, he says: “I think ultimately, the people who make the aeroplanes, ie the engine manufacturers and the airframe manufacturers, need to come up with a solution and resolve this issue.

“The aerospace industry first became aware of with this problem in the 1950s, and in the early days, they knew that taking the air from the engines wasn’t a good idea so they didn’t.

“And here we are in 2019 and they’re providing air to breathe to passengers that they know can get contaminated because they know that they can get away with it. But those days are coming to an end.”

He adds: “The aerospace can do anything if it wants to. If they needed to fix the problem, they could get it fixed in years.”