Fascinating new book reveals the abandoned World War I ruins that have survived for over a century, from New York to Australia via the British countryside

Over a century has passed since the end of World War I, but physical reminders of ‘the war to end all wars’ remain today.

These reminders are explored in Abandoned Places of World War I, a fascinating new book by conflict archaeologist and historian Neil Faulkner.

Featuring more than 180 poignant images of the deserted detritus of war, the book documents bunkers, trench systems, tunnels, fortifications and gun emplacements, guiding the reader from North America to Australia via the UK.

In the introduction to the book, Faulkner writes: ‘The struggle ranged from the mud-mires of Flanders to the forests of the Argonne, from the Polish swamps to the Carpathian passes, from the mountains along the Isonzo River to the slopes of Gallipoli, to the deserts of Iraq.

‘When the war finally ended – with 1.5million dead and 30million maimed for life – the conflict left a residue of material remains greater than that of all previous wars combined. Many of those remains survive today.’ 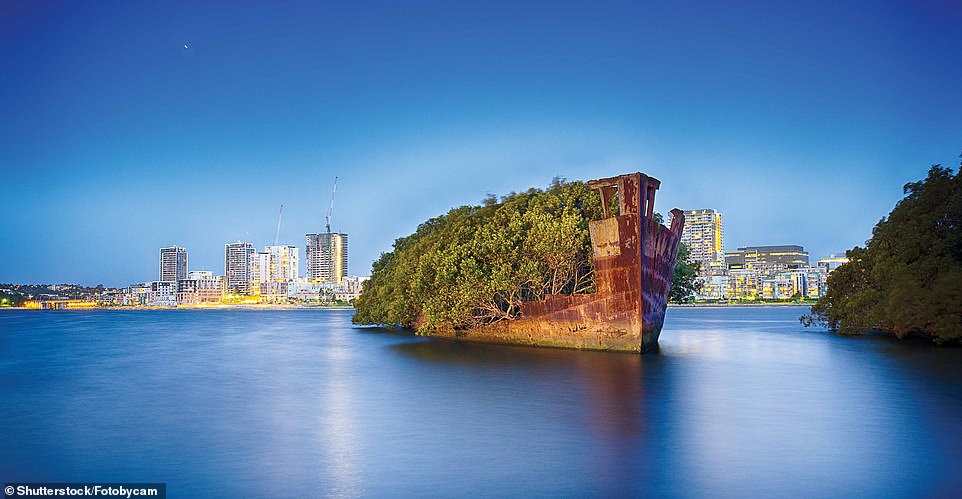 SS AYRFIELD, HOMEBUSH BAY, PARRAMATTA, NEW SOUTH WALES, AUSTRALIA: ‘This old collier, originally built in a British yard in 1911, did service in both world wars before finding its way to a breaker’s yard in 1972,’ explains Faulkner. At that point, he reveals, ‘the price of scrap metal plummeted, the break-up was abandoned, and the rusting hull has since sprouted a small forest’ 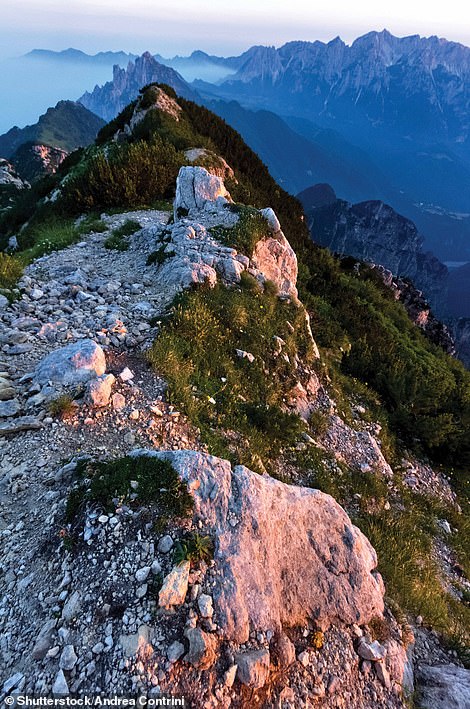 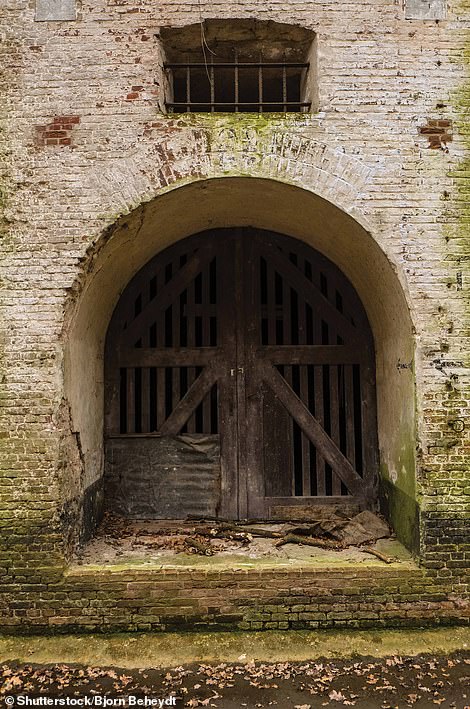 MONTE PASUBIO, TRENTINO, ITALY (LEFT): Faulkner describes the limestone massif of Monte Pasubio as ‘one of the war’s most remote battlefields’. He writes: ‘This massif of jagged peaks and plateaus more than 2,000m (6,500ft) high saw Italians and Austrians engaged in years of attritional warfare in freezing rock-cut trenches and dugouts.’ EDEGEM FORTRESS, ANTWERP, BELGIUM (RIGHT): This was one of 21 forts forming Antwerp’s main line of resistance in 1914, explains Faulkner 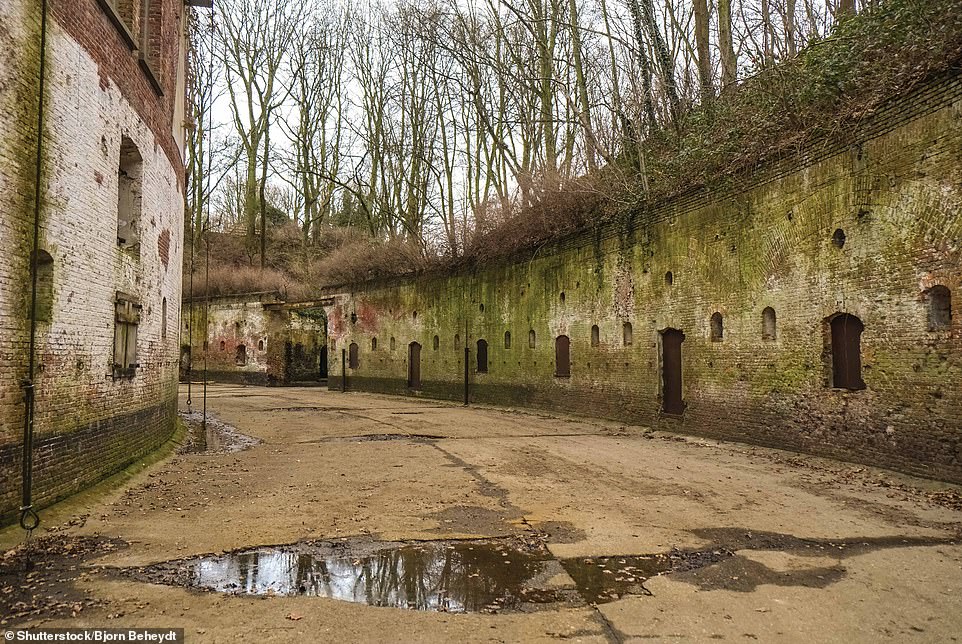 EDEGEM FORTRESS, ANTWERP, BELGIUM: Shedding light on the significance of forts like the Edegem Fortress, Faulkner writes: ‘By the late 19th century, the range and power of modern artillery meant that cities had to be defended by rings of forts often placed several miles from the centre’ 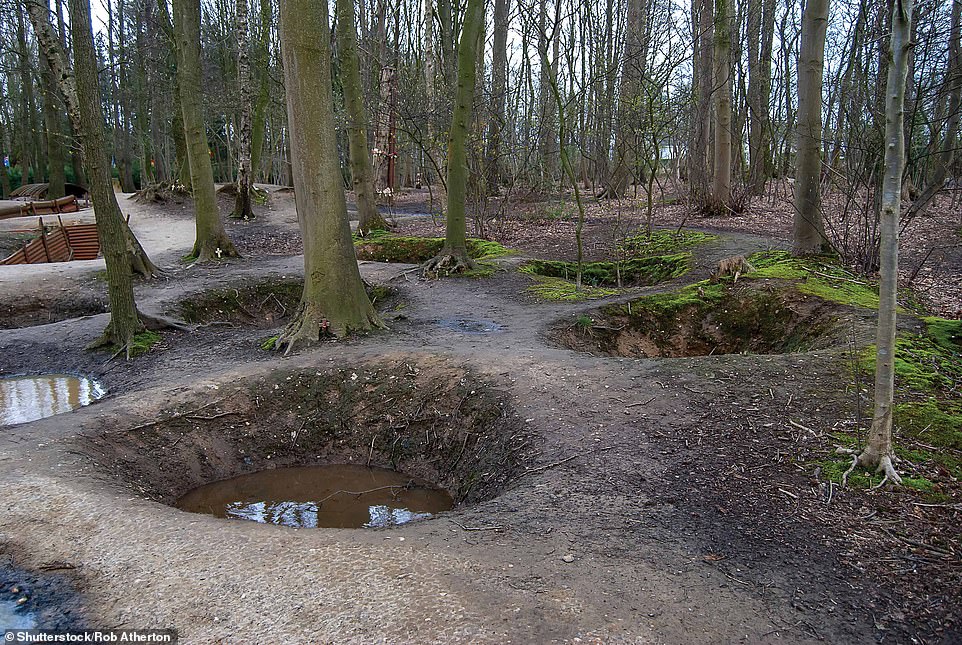 SANCTUARY WOOD, YPRES, BELGIUM: Faulkner reveals that when the Schier family returned to Ypres after the war, they decided to preserve the ‘trenches, shell-holes and splintered trees’ on their land as an attraction for pilgrims and tourists. The author writes: ‘They later added a museum, now much enlarged, and the site remains one of the best places in which to explore the character of World War I trench systems’ 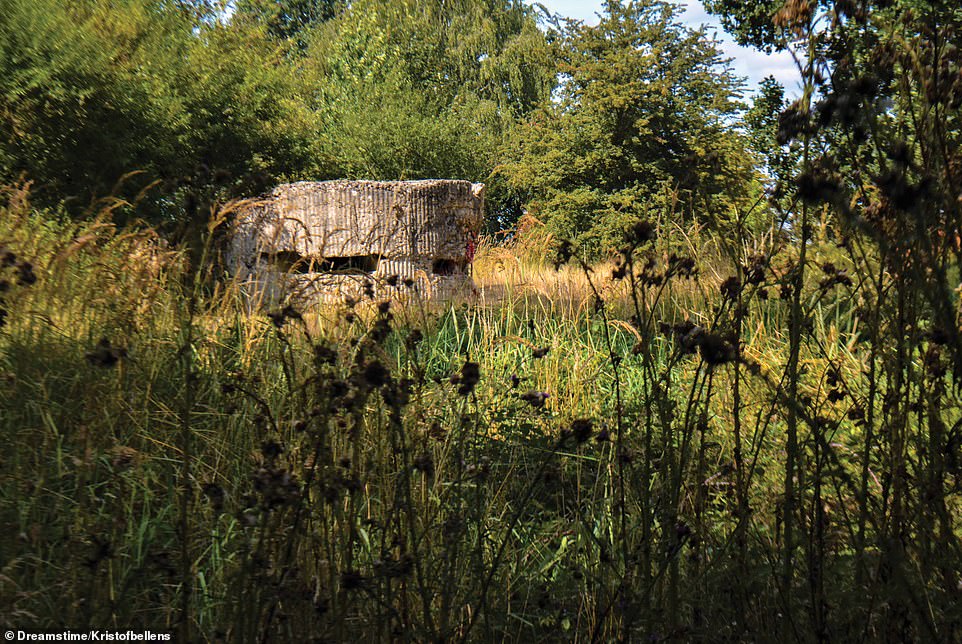 BUNKER, HILL 60, ZILLEBEKE, BELGIUM: Faulkner explains that by 1917, the Germans had abandoned linear defence in favour of defence in depth based on belts formed of separate strongpoints. ‘Machine-guns would be mounted in concrete pillboxes arranged to create kill zones swept by converging fire,’ he says, adding: ‘Hill 60 was one of the most fiercely contested locations in the Ypres Salient [the battlegrounds surrounding Ypres]’ 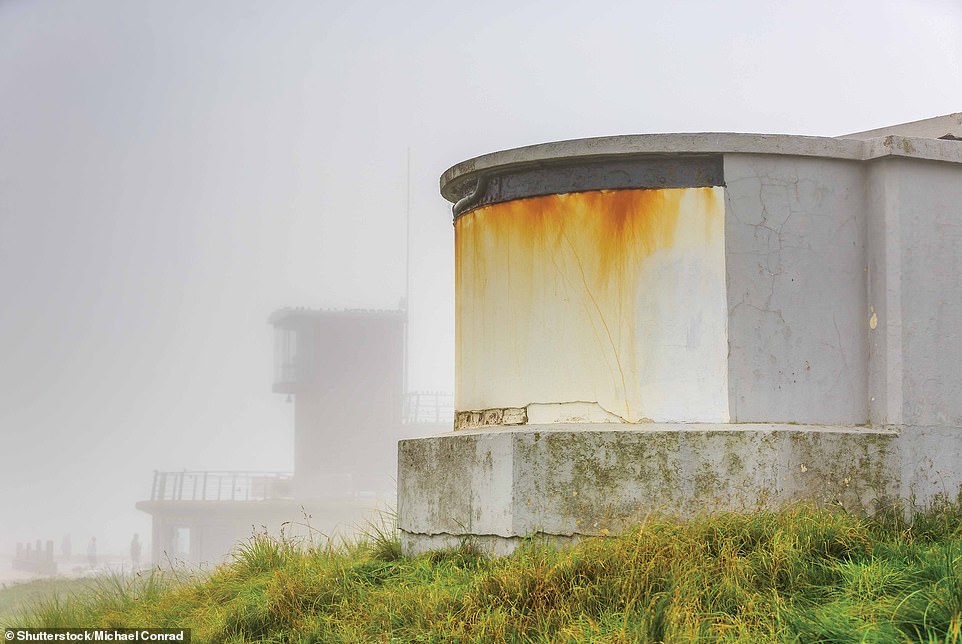 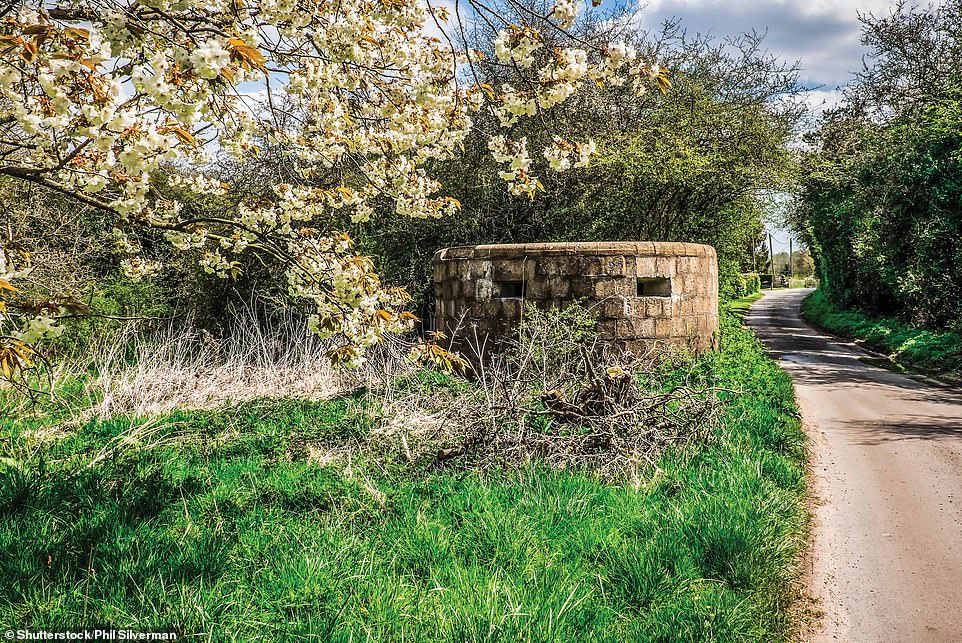 MACHINE GUN PILLBOX, NORTH WALSHAM, NORFOLK, ENGLAND: ‘Fears of German invasion were very real during the Great War,’ Faulkner writes. He says trenches were dug and pillboxes constructed in anticipation of land fighting in coastal areas. According to the historian, pillboxes – such as the one pictured – ‘were sited on routeways and were designed as strongpoints within wider defensive systems’ 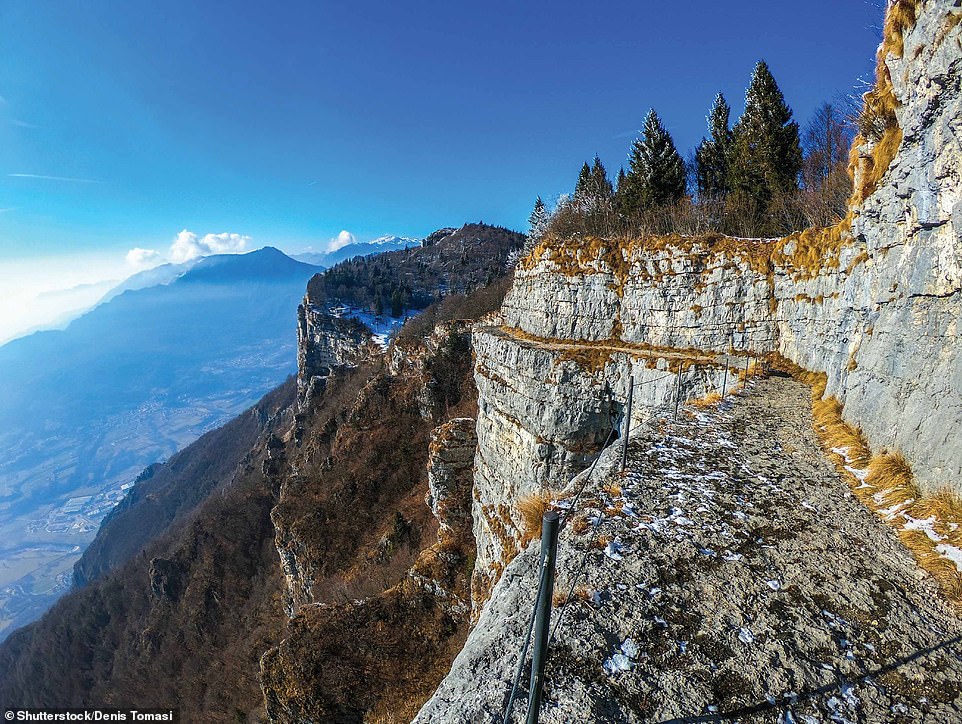 MONTE CENGIO, TRENTINO, ITALY: Monte Cengio, a 1,350m- (4,400ft) high mountain on the southern edge of the Asiago Plateau, ‘was a key Italian defensive position guarding the approaches to the Po Valley’, according to Faulkner. The author writes: ‘Overwhelmed by Austro-Hungarian attack in June 1916, the Italians counter-attacked and recaptured the mountain.’ He reveals that most of the fortifications visible today were built the following year, during 1917 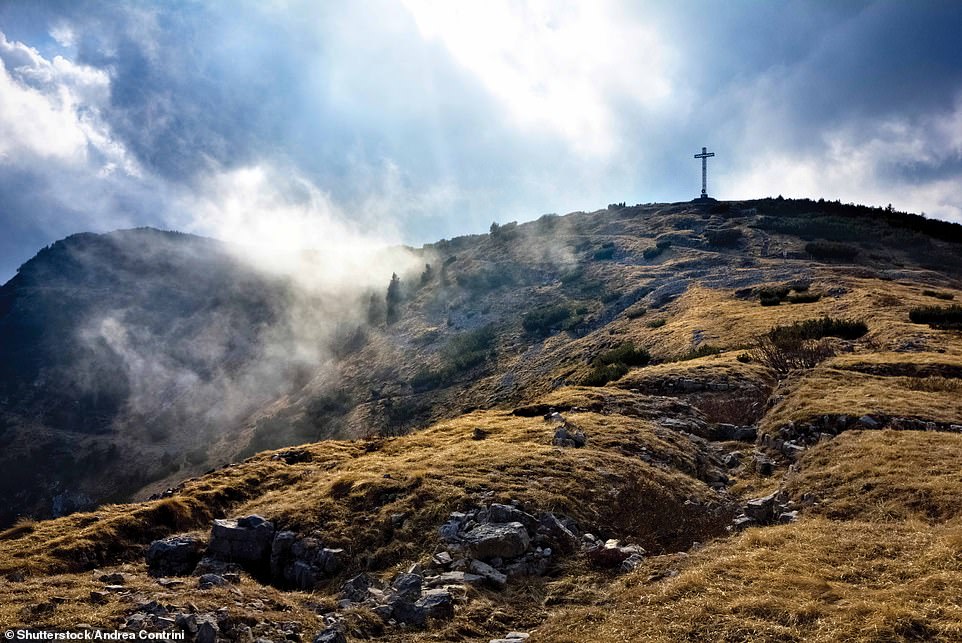 MOUNT MAGGIO, TRENTINO, ITALY: In the foreground of this picture and scored across the slopes in the middle-ground are former Great War trenches, reveals Faulkner, who adds that ‘they were placed off the skyline but positioned with clear fields of fire downhill’ 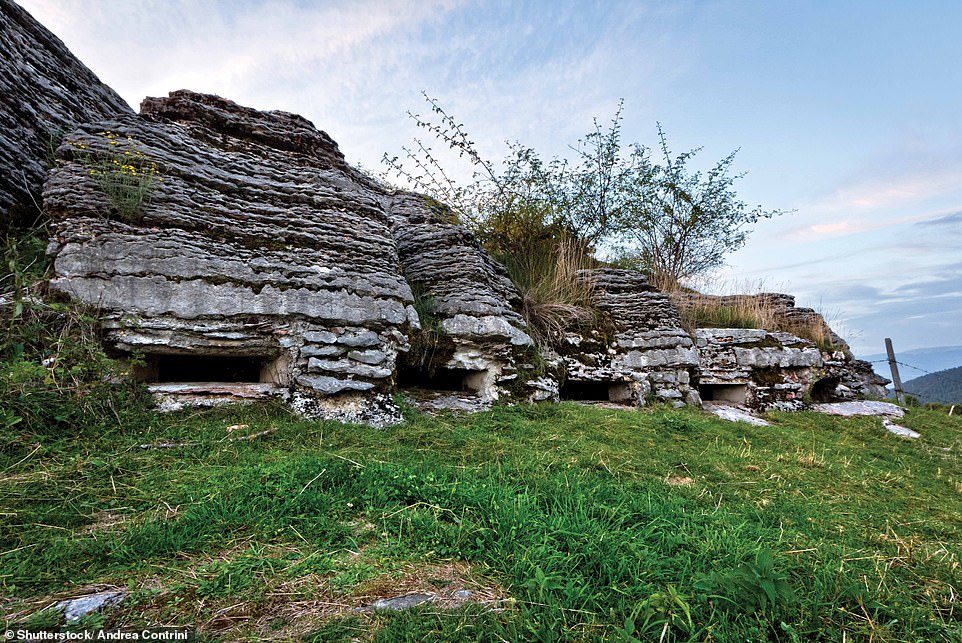 MOUNT ZOVETTO, ASIAGO PLATEAU, ITALY: The picture above shows an artillery emplacement on Mount Zovetto. ‘British reinforcements were sent to the Italian front following the collapse at Caporetto in November 1917,’ writes Faulkner. He explains these heavily-camouflaged gun ports, which had ‘extensive rock-cut galleries behind’, were constructed by British artillerymen the following year 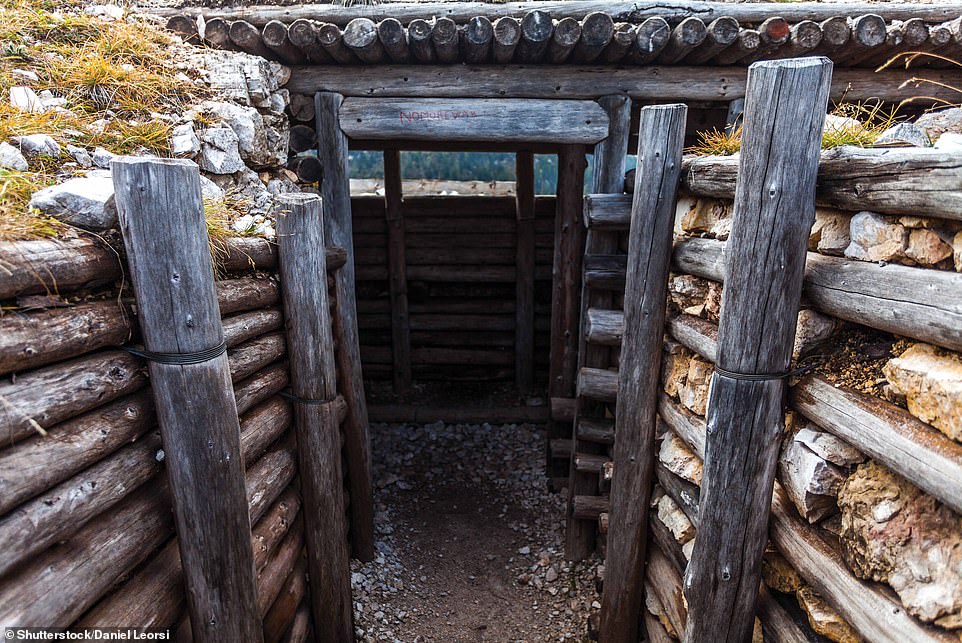 CINQUE TORRI, DOLOMITES, ITALY: Above you’ll see a trench in the ‘Five Towers’ – which Faulkner describes as ‘a distinctive rock formation some 3,600m (11,800ft) up’ 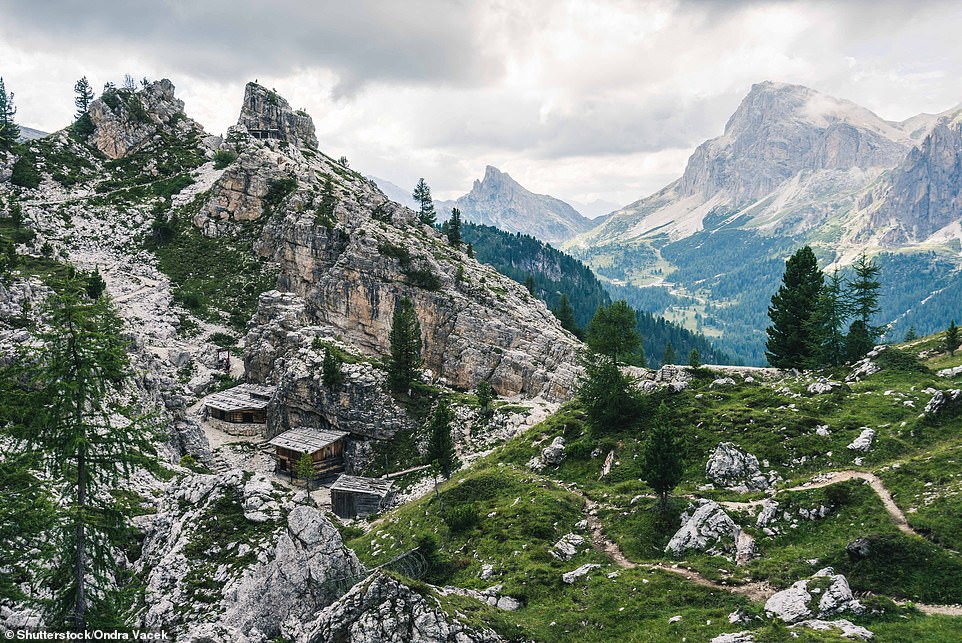 CINQUE TORRI, DOLOMITES, ITALY: Faulkner reveals the ‘Five Towers’ was the scene of sustained fighting between Italian and Austrian troops 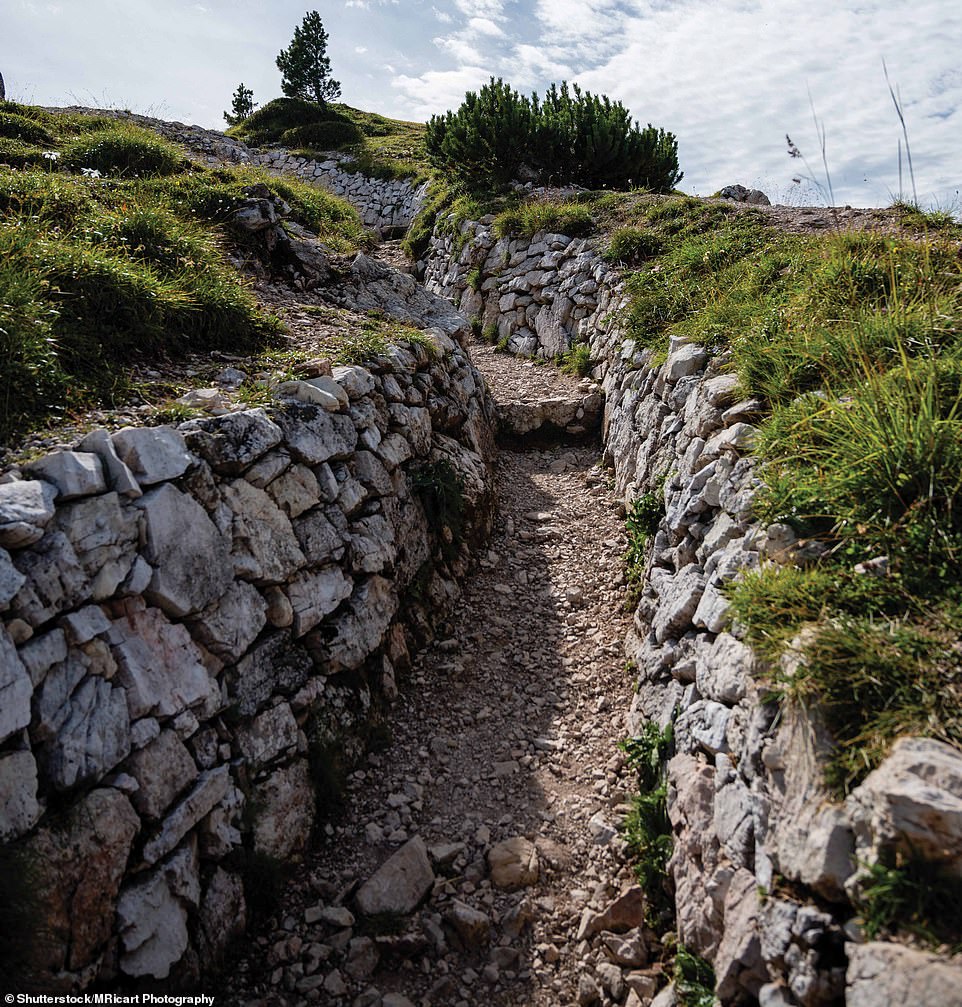 CINQUE TORRI, DOLOMITES, ITALY:  Visitors can explore the ‘Five Towers’ today, where a  network of trenches, machine-gun emplacements, observation posts and accommodation areas have been partially reconstructed as an open-air museum, according to Faulkner 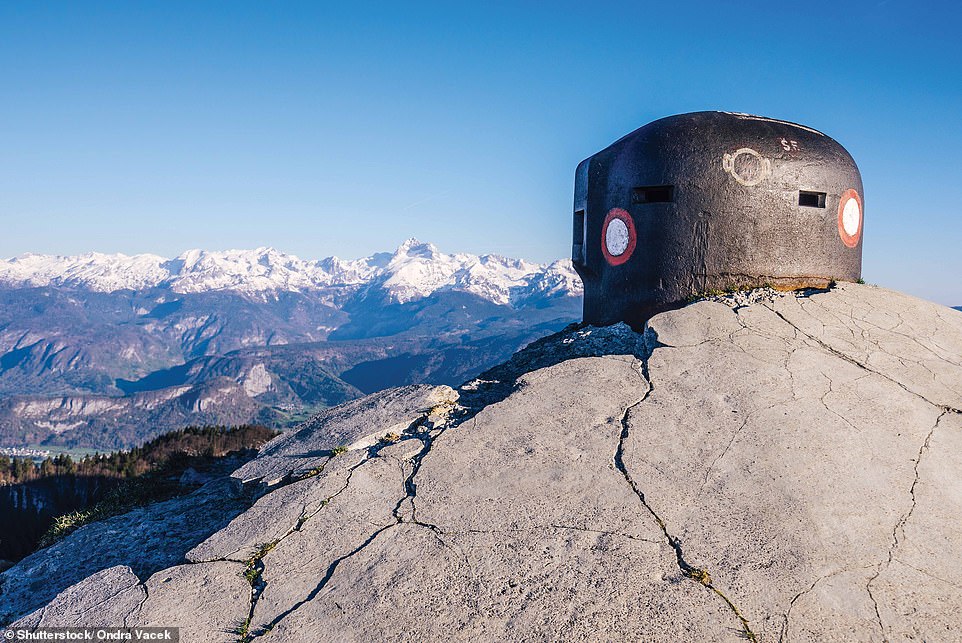 GUN EMPLACEMENT, MOUNT MOZIC, SORISKA PLANINA, SLOVENIA: Faulkner says: ‘This steel gun turret is one of the few visible elements in an underground complex of tunnels and chambers on a strategic mountain-top overlooking the Isonzo River’ 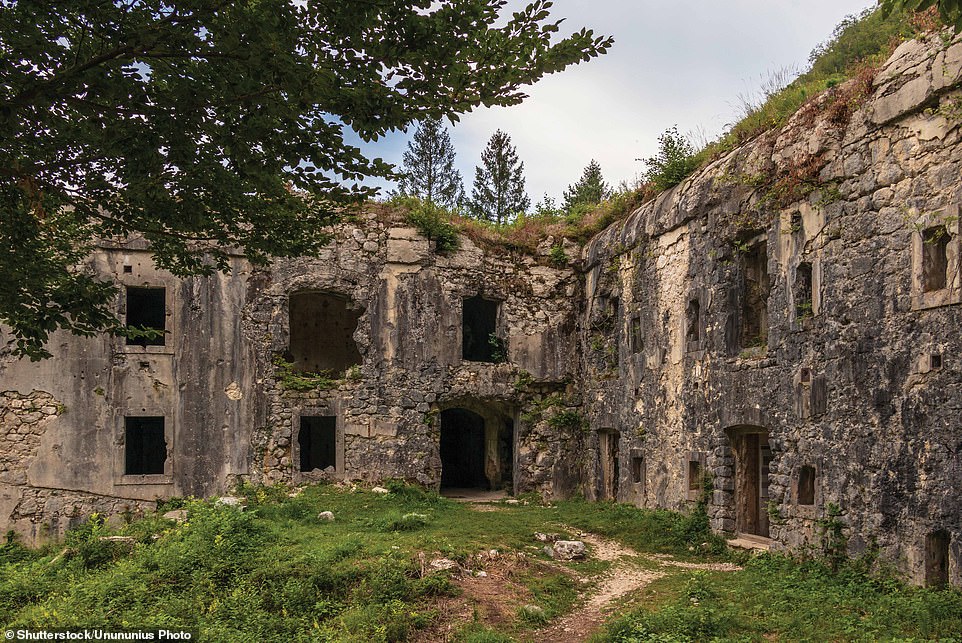 FORT HERMANN, BOVEC, ISONZO VALLEY, SLOVENIA: Fort Hermann was twinned with Fort Kluze about two miles away, Faulkner explains. ‘This Austro-Hungarian fort was built between 1897 and 1900 to guard an important pass near Mount Rombon, just north of the Isonzo River,’ he writes. However, Faulkner notes that when fighting spread up the mountainsides,  fortifications of this kind ‘proved largely redundant’ 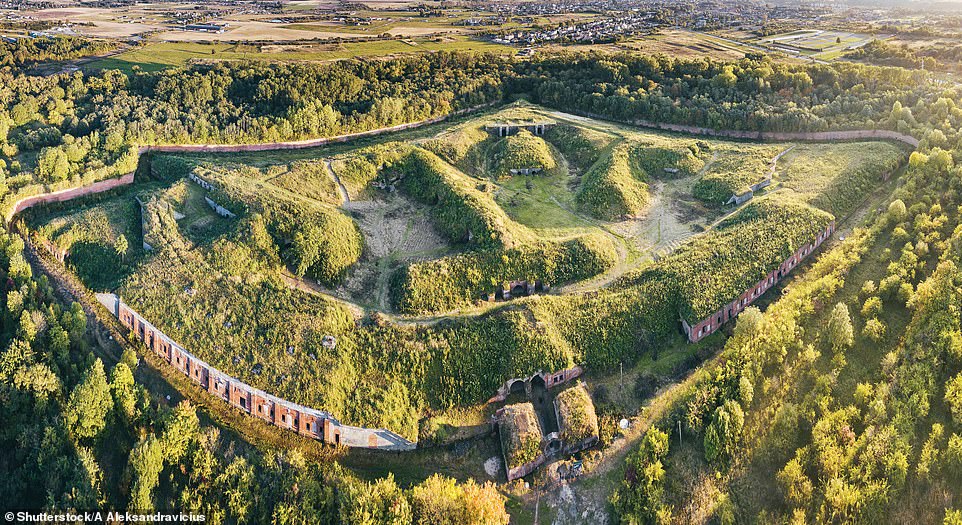 KAUNAS FORTRESS, LITHUANIA: Above is an aerial picture of Kaunas Fortress, which Faulkner says is a ‘vast defensive complex’. It was built between 1882 and 1915 to protect the Russian Empire’s Baltic flank, extended across 65 square kilometres (25 square miles), according to the historian. Outlining the fate of the fortress, he writes: ‘Defended by 90,000 soldiers in 1915, it succumbed to German assault after 11 days’ resistance, partly due to bombardment by a monster 420mm (16.5in) siege howitzer lobbing one-ton shells’ 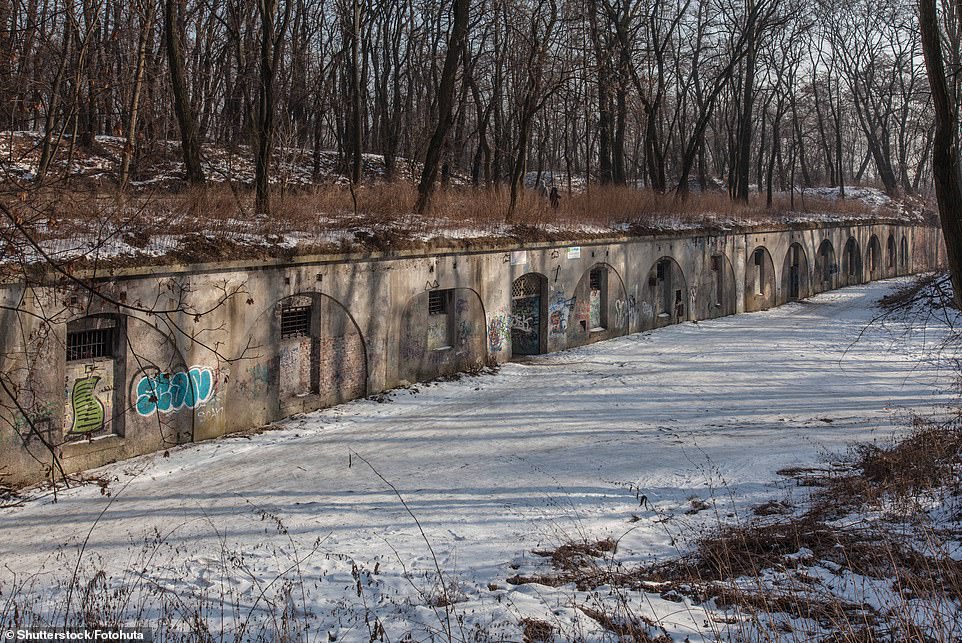 FORT 48 BATOWICE, KRAKOW, POLAND: This picture depicts one of an outer ring of pre-war Austro-Hungarian artillery forts around Krakow that was constructed in the 1880s, Faulkner reveals. He writes: ‘The outer ring contained and protected an inner ring of older, sometimes originally medieval, city defences’ 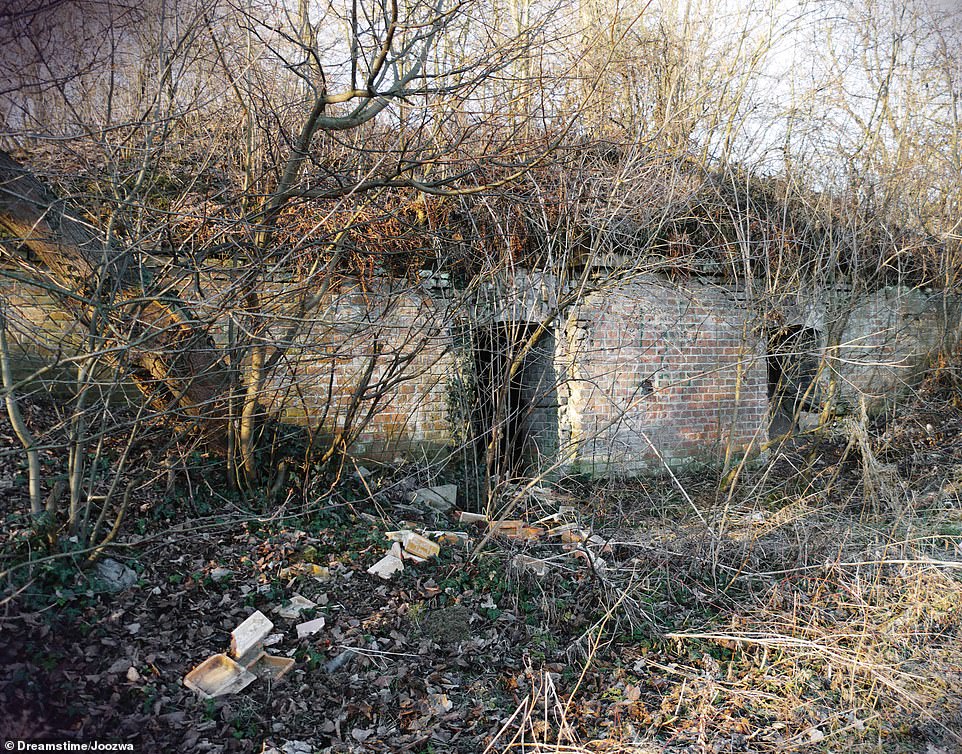 PRZEMYSL FORTRESS, POLAND: The Przemysl fortress is a ‘huge Austro-Hungarian fortress’ that covered the approaches to the Carpathian passes, according to Faulkner. In addition to the central work of the fortress, there were 25 smaller forts and 12 artillery redoubts 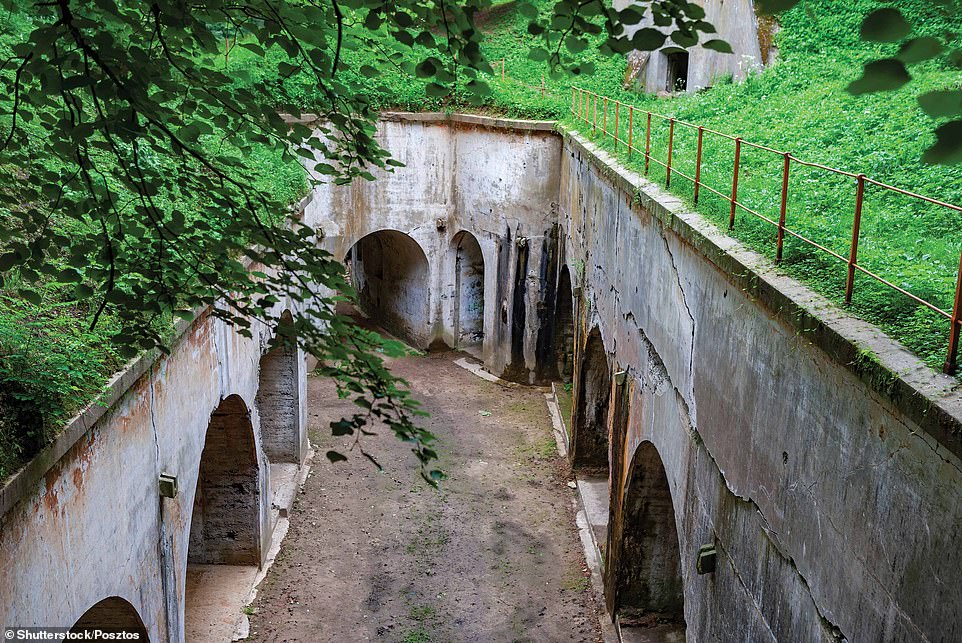 PRZEMYSL FORTRESS, POLAND:  Recounting the fate of the Przemysl fortress in World War I, Faulkner writes: ‘Besieged by the Russians from September 1914, the garrison of 120,000 men, reduced by starvation, finally surrendered in March 1915’

CARPATHIAN MOUNTAINS: ‘This view of the former frontline between German and Russian troops gives a clear impression of these battlefields in the clouds,’ Faulkner says of this vista over the Carpathian Mountains. The historian explains that mountain warfare, traditionally confined to the passes, spilt up the highest slopes during World War I ‘as attackers attempted to flank fixed positions that could not be taken in a frontal assault on the lower ground’ 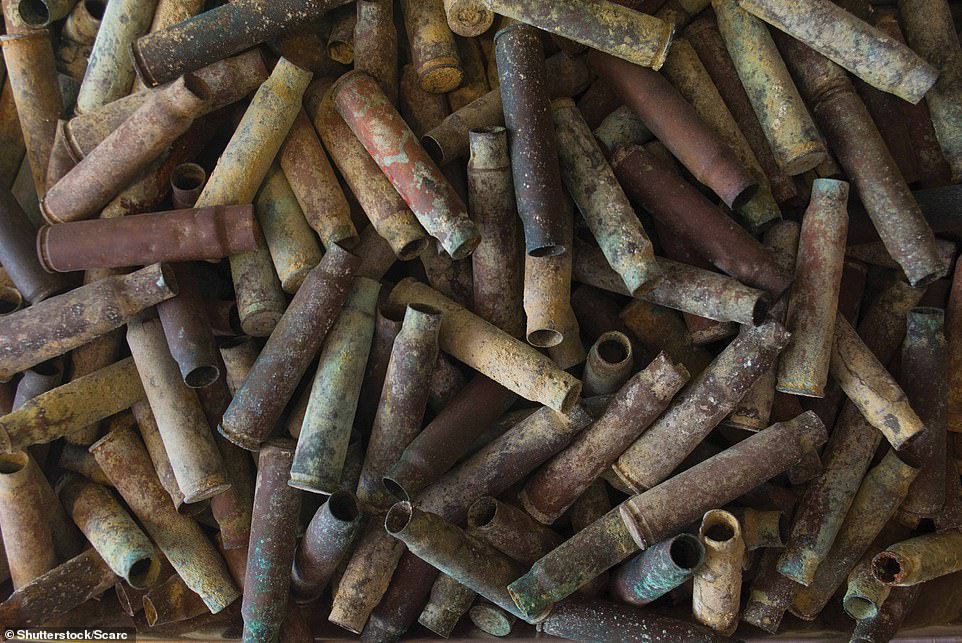 AMMUNITION, GALLIPOLI, TURKEY: Pictured is a collection of spent Mauser cartridges in Turkey. Faulkner says: ‘The German Mauser Gewehr 98 was the standard rifle used by Ottoman infantry in World War I’ 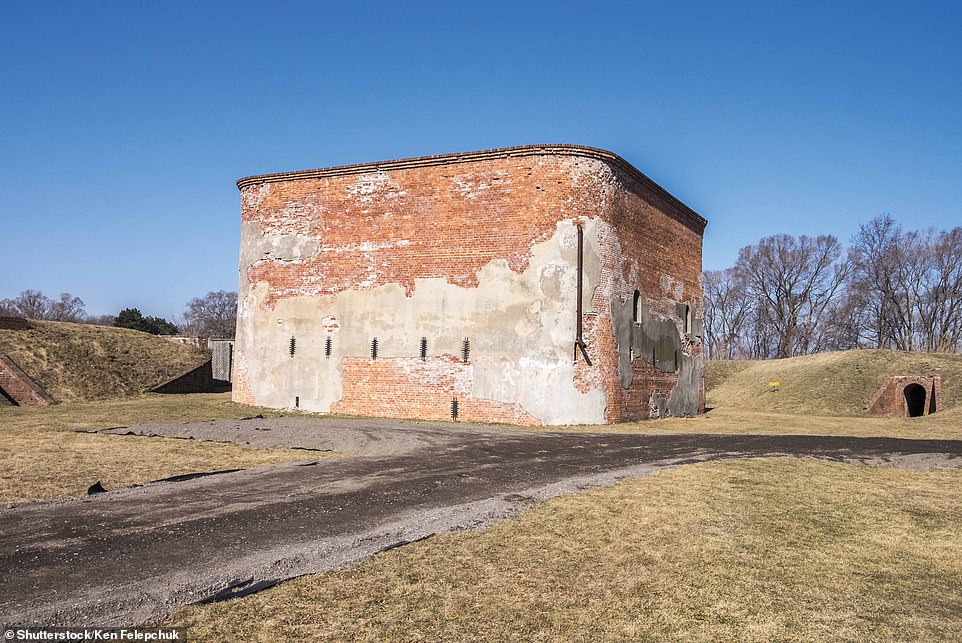 FORT MISSISSAUGA, NIAGARA-ON-THE-LAKE, ONTARIO, CANADA: This old-fashioned brick fort was built to defend the frontier during the War of 1812 between Great Britain and the United States, according to the author. He reveals it was ‘reused for training purposes during World War I, like most old fortifications’ 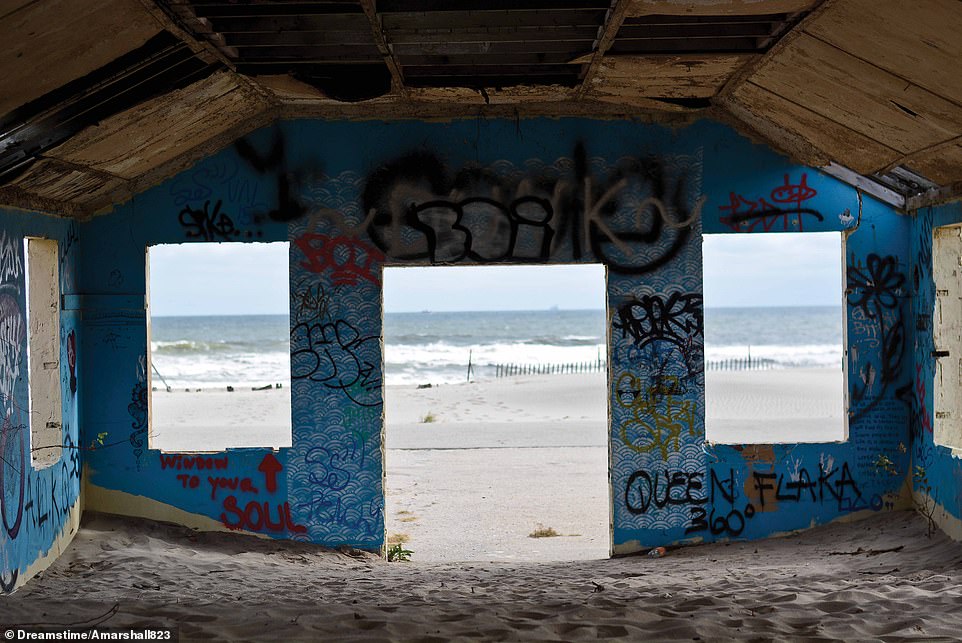 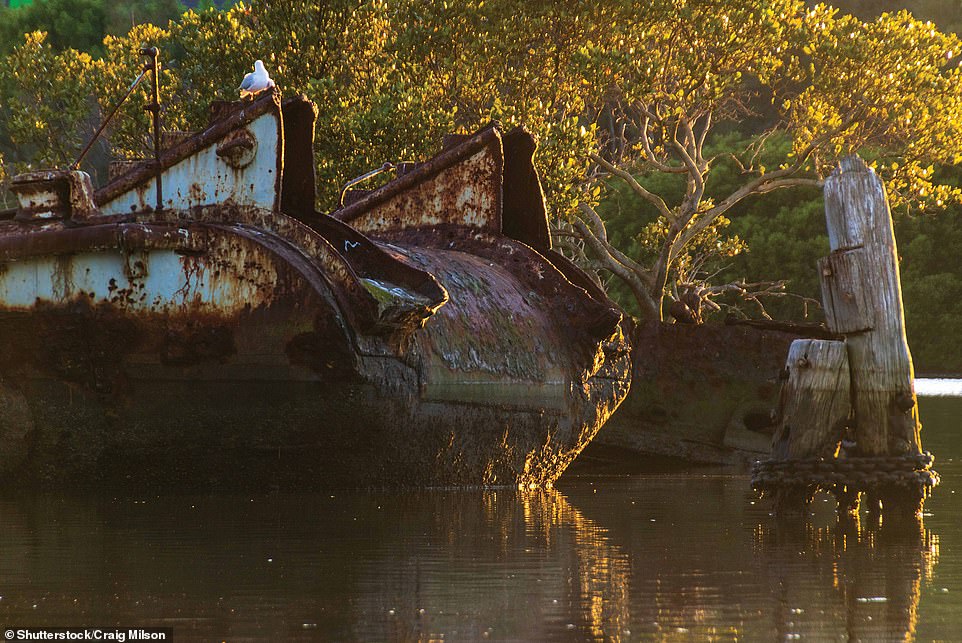 SS HEROIC, SYDNEY, NEW SOUTH WALES, AUSTRALIA: Look above and you’ll see what remains of the SS Heroic. ‘This steel-hulled steamboat tug was British-built in 1909 and was then commandeered by the Royal Navy to perform rescue services off the Scilly Isles during World War I,’ Faulkner writes. The historian says it did further service during World War II before being sold for scrap in the 1970s 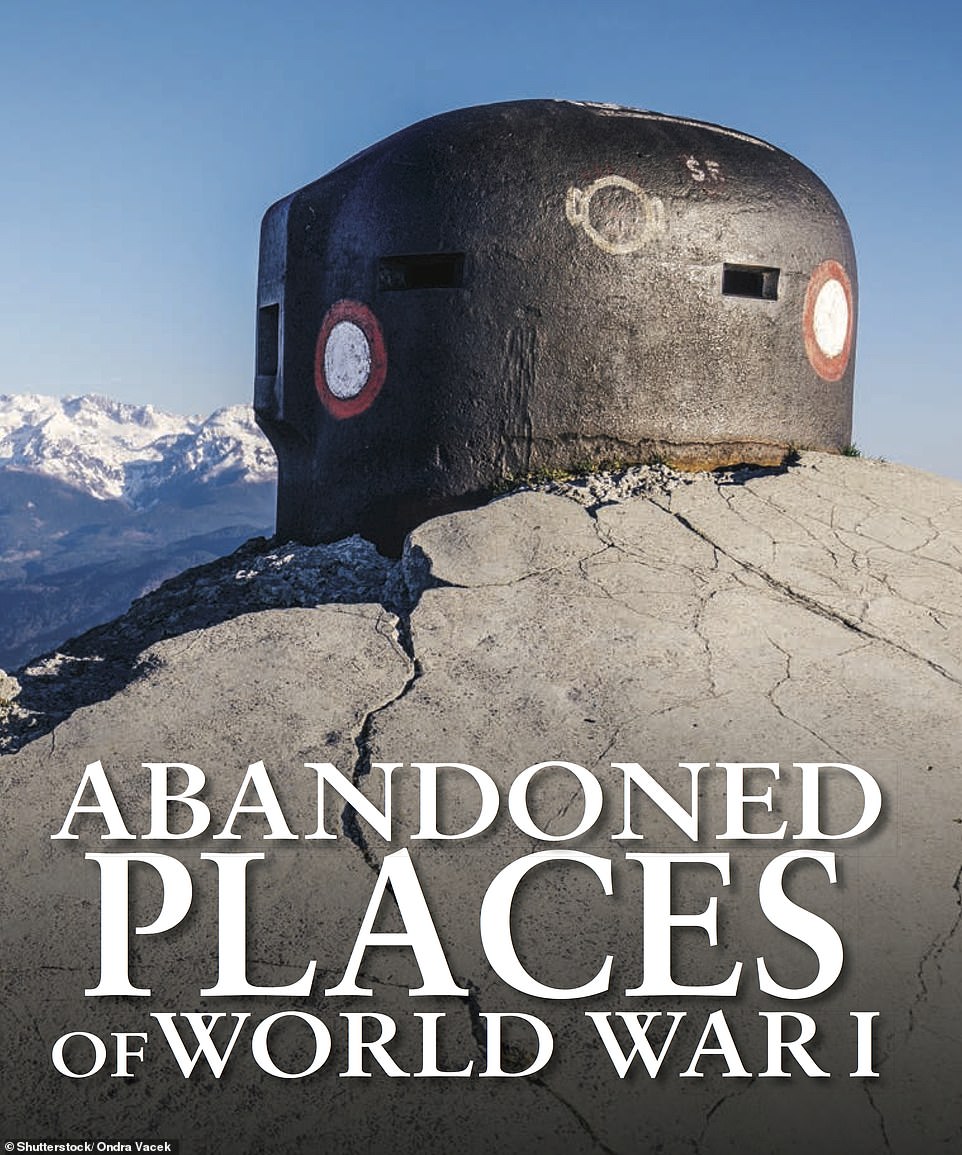 Images are taken from the book Abandoned Places of World War I by Neil Faulkner (ISBN 978-1-83886-045-5), published by Amber Books Ltd and available from bookshops and online booksellers (RRP £19.99)