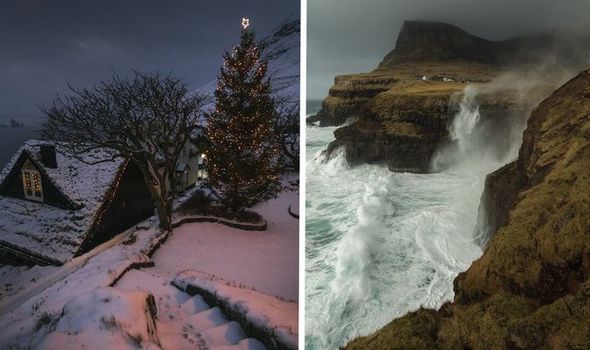 Saviour Mifsud, 35, is Maltese but moved to the Faroe Islands when he was 21 years old, after falling in love with a Faroese woman. He told Express.co.uk what it’s like to live in a place which only gets five hours of daylight in winter, and what the Faroese people usually do for New Year’s Eve.

Saviour, who works as a salesman from 7am until 4pm, is a keen photographer and enjoys taking photos of the Faroese landscape in the evenings.

The Islands are famous for their mountains, valleys, and grassy heathland.

Their steep coastal cliffs which are home to thousands of seabirds also attract nature lovers from all over the globe.

Saviour lives in Tórshavn, the Islands’ capital, with his children.

The Maltese expat told Express.co.uk that Faroese people, including himself, celebrate Christmas on December 24.

Speaking of the festivities last week, he said: “We gathered with the family on the 24th at around 6pm.

“Everyone prepared a few things to eat.

“For example, I prepared two ducks filled with prune and apples and some brown potatoes.

“Other members of the family made salad, biscuits, gravy, and so on.

“After we finished eating we started to open the presents.

“After an hour or so of opening the presents we took a break and ate dessert, and then opened the last few presents.”

Saviour added: “On the Faroe Islands we normally eat duck for Christmas”.

The salesman and photographer went on to say “the normal temperature for this time of year is around minus two to four degrees Celsius.

“In the summertime it goes up to around 20 degrees.”

He added: “At the moment the days are very short – we have about five hours of daylight.”

But as for snow, there is currently only a little dusting on the mountain peaks.

“New Year’s Eve is a little bit different from one island to another,” he explained.

“I spent the new year these last three years on Suðuroy islands – the southern most island of the Faroe Islands – in the village of Vágur.

“Each year the people of the village spend days preparing for the occasion.

“This includes preparing the torches, the fireworks, and a boat that ends up being burned at midnight.

“At midnight on New Year’s Eve, everyone gathers together and some people carry torches through the villages and gather in the centre of one village where they circle around the boat.

“Then, they throw the torches on the boat and everybody sings a Faroese song together.

“Afterwards, the fireworks are lit.”

But as well as Faroese traditions, what is the best thing about living on the Islands for Saviour?

“Wherever you are on the Faroe Islands, you are always close to nature and it’s wonders,” he said.

“But it is hard being so far away from my Maltese family.”