Hyperloop linking Amsterdam airport to other European cities may be a substitute to short-haul flights, says study

Passenger-packed pods speeding through vacuum tubes linking Amsterdam’s Schiphol airport to European cities could prove a viable low-carbon alternative to short-haul flights, according to a study published on Wednesday.

Although hyperloop technology, which uses magnetic levitation to allow near-silent travel at airline speeds, has not yet proven feasible in large-scale operations, the airport said it was seriously exploring it as a potential form of sustainable transport.

‘We are genuinely interested in where hyperloop could go,’ said Hassan Charaf, head of innovation at Royal Schiphol Group, which owns and operates the airport, one of Europe’s busiest. 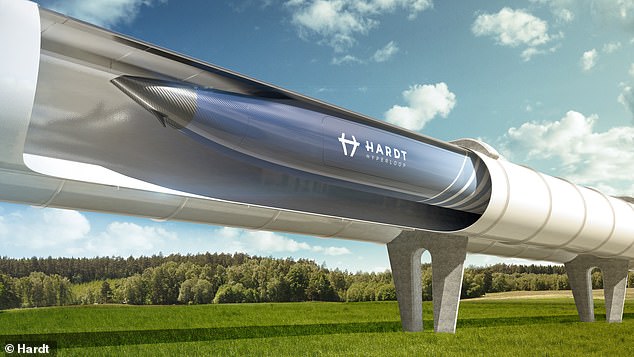 The hyperloop concept was unveiled by Elon Musk in 2013, who at the time said it could take passengers the 380 miles (610km) from LA to San Francisco in 30 minutes

The airport conducted the study in partnership with Dutch company Hardt Hyperloop and it assessed how the system could potentially ease air travel congestion in the coming decades.

Although hurdles remain to realising the company’s vision of a Europe-wide hyperloop network powered by renewable energy, the founders hope climate commitments in the European Union’s Green Deal will spur greater investment.

‘Hyperloop really has the potential to be the sustainable alternative to aviation,’ Tim Houter, Hardt’s chief executive and a co-founder, told Reuters. 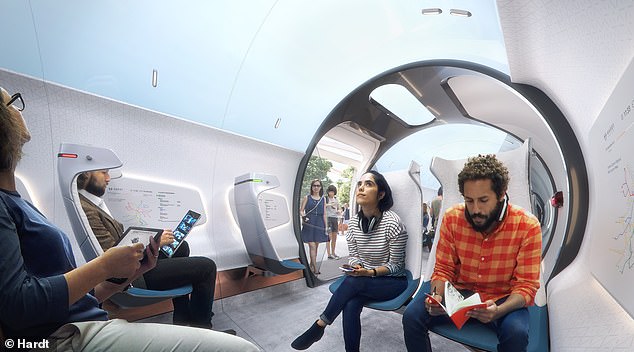 A rendering of what passengers could experience inside a hyperloop pod 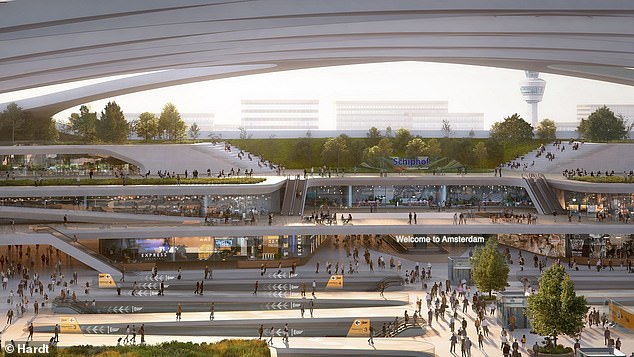 A rendering of what a hyperloop station in Amsterdam could look like. Schiphol Airport said it was seriously exploring hyperloop as a potential form of sustainable transport

Hyperloop is a proposed method of travel that would transport people at airline speeds – roughly 600 to 700mph – between distant locations.

It was unveiled by Elon Musk in 2013, who at the time said it could take passengers the 380 miles (610km) from LA to San Francisco in 30 minutes – half the time it takes a plane.

It involves a train-style pod that floats using magnetic levitation being pushed via electric propulsion through a steel tube maintained at a partial vacuum.

The tube is suspended off the ground to protect against weather and earthquakes.

Hardt said it has signed an agreement with a major European railway manager, which it declined to name, to explore potential routes jointly.

Last month, the company claimed that a hyperloop network that would whoosh passengers between Amsterdam and Paris in under 90 minutes at 620mph might become a reality within the next eight years.

It carried out a study alongside the province of North Holland, which it says shows that the project could be economically viable and be up and running as early as 2028.

Passengers would travel from Amsterdam to Eindhoven in just 15 minutes, to Dusseldorf in less than 30 minutes and Brussels in less than an hour on five potential routes.

The hyperloop concept was unveiled by Elon Musk in 2013, who at the time said it could take passengers the 380 miles (610km) from LA to San Francisco in 30 minutes – half the time it takes a plane.