Great British Boltholes: A slice of porcine perfection at The Pig at Bridge Place, which is ‘the epitome of five-star British style’

Reclining in the sun with only a gnarled olive tree for shade while I sip a glass of chilled white wine, I might be kicking back in Tuscany. But no, I’m in… Kent.

The Garden of England has no fewer than 50 vineyards and there’s no better place to sample the county’s delights than at The Pig. Just three miles from Canterbury, this newly renovated hotel-spa-restaurant in the Nailbourne Valley is the epitome of five-star British style.

Dating from 1638, the Grade II listed Bridge Place was built by Sir Arnold Braems, one of the first managers of Dover Harbour and friend of Sir Samuel Pepys. 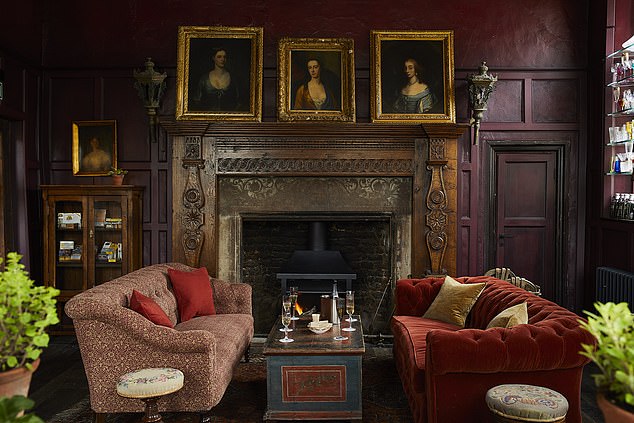 One of the cosy lounges inside The Pig at Bridge Place in Kent, which has seven rooms in the main house and a two-storey hideaway in the old stables

Surrounded by ten acres of park and water meadows, the house was considered the finest building in East Kent, second only to Chilham Castle. After falling into disrepair, it was restored in the 1960s and became a notorious rock ’n’ roll party venue, hosting Led Zeppelin and The Kinks.

Today there are seven rooms in the main house and a two-storey hideaway in the old stables.

Recent additions include seven Kentish Hop Picker Huts made from reclaimed materials. These rooms on stilts come complete with freestanding baths and wood-burning stoves. As evening draws in, watch the sun set through the willow trees from your veranda.

If you can pull yourself away from the warren of velvety, low-lit dens, then wander around the exquisite kitchen garden. Stroll among kale, tomatoes so plump that they look ready to burst, and other edibles that will likely end up on your plate.

If The Pig can’t grow the fruit and veg, or rear the meat on site, staff do their best to source it from within 25 miles. A bold menu changes regularly and stand-out dishes include Snoad Farm pork and venison faggot, and fillet of Folkestone Market hake with courgettes and cockle butter sauce.

Local wines are in abundance too, with offerings from Chapel Down, Simpsons and Gusbourne. 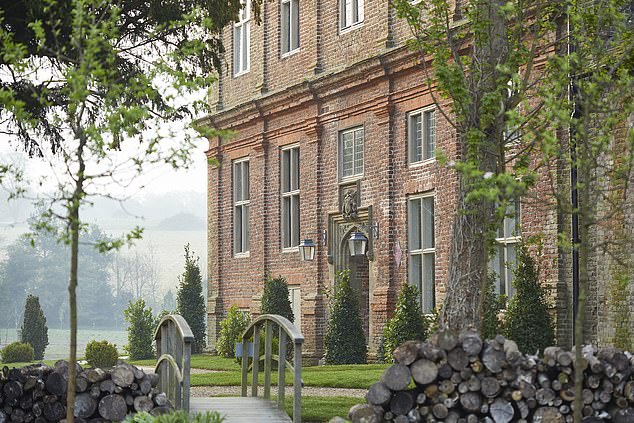 Garden of England: The hotel is set in ten acres of park and water meadows

The spa offers treatments inside the ramshackle Potting Shed. My husband enjoyed the Men Only treatment (60 minutes, £110), blending shiatsu with Swedish massage and hot stone therapy.

My Signature Treatment (120 minutes, £185) included a facial and a foot and body massage. With birdsong outside and the aroma of a freshly brewed infusion from the kitchen garden to sip on as I was pampered, it struck me that The Pig may well be the Garden of England’s own slice of Eden.

The USP: A glorious mix of the best of British old and new, plus fabulous cuisine served up in relaxed but sumptuous surroundings.

The Rooms: From regal doubles in the main house to luxe two-bedroom family ‘homes’ among the trees. For a romantic break, opt for the stylish Barn.

The Food: Enjoy a light bite or a pizza cooked in the open-air wood oven in summer, or head for the main restaurant.