Home » Travel » A review of the Parklane hotel in Limassol, Cyprus

Top of the league! The goal is for children to play football and for Mum to relax by the pool – and this Cypriot resort hits the back of the net

My son Joseph passes to the unusually tall winger out wide on the right, who then splits the defence with a perfectly weighted ball. Joseph runs onto it and then his teammate’s deep Bulgarian voice booms out around the pitch: ‘Feenish!’

Joseph dutifully slots the ball past the keeper to secure his hat-trick, then sprints to deliver a euphoric, jumping ‘high ten’ to the architect of the brilliant assist. Dimitar Berbatov chuckles warmly at such unbridled exuberance.

Well, he knows it’s not every day a ten-year-old lad gets to play alongside a former Manchester United and Tottenham superstar. But, then, this is Football Escapes. 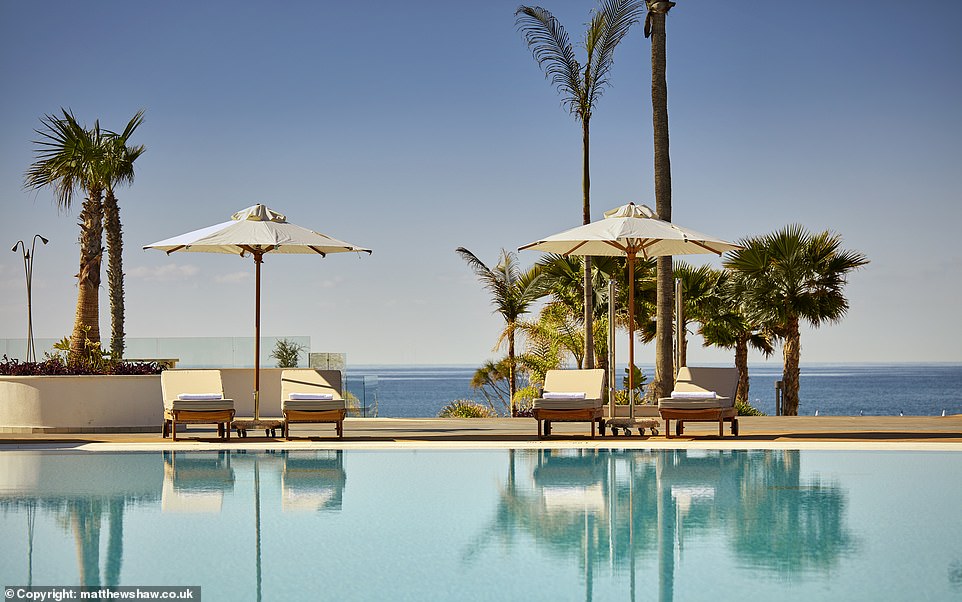 What a result: Rob McGibbon ventured to the new Parklane Hotel in Cyprus for a football-focused break with his son and wife

The prospect of a week’s break with a football focus over summer half-term was a dream for two mad Chelsea fans like Joseph and me, but it was hardly the easiest sell to my wife, Emma.

Last season was particularly long and bruising in our house, with football being the flashpoint for many a red card dispute — not least knuckling down to homework.

In the space of a year, Joseph had gone from having a vague interest in The Beautiful Game to all-consuming obsession.

These days, if he’s not playing, watching, or talking about football, he’s reading poorly written biographies, or analysing his unfeasibly large — and expensive — Match Attax cards collection. In quieter moments he will simply chill out by singing Blue Is The Colour. 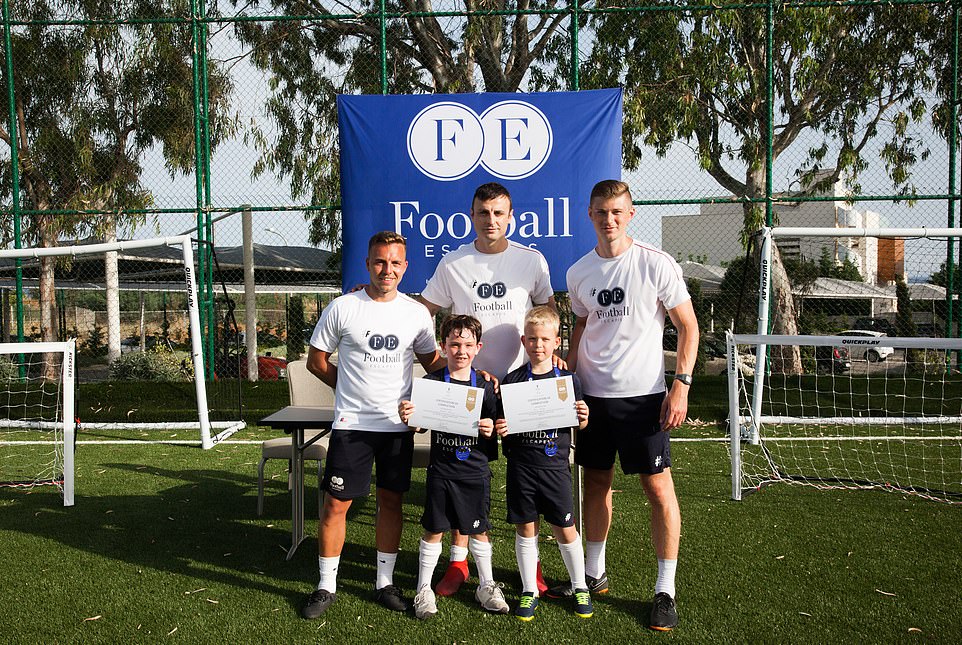 To exacerbate matters, his mum is an artist who would rather watch her paint dry than sit through a game, but I had managed to sell our Football Escapes holiday as a bit of footy for the boys, a glamorous break for Mum.

So we head to the brand new Parklane Hotel in Cyprus, the latest destination for Football Escapes, which is also in Dubai, Portugal, Mauritius and the Maldives.

The Russian owner of Parklane has just spent £120 million securing its place in the Cyprus top flight and the money shows.

As often only a child can, Joseph sums it up with one look at the cavernous white marble-lined lobby, with a 65ft glass petals installation falling from the ceiling: ‘Wow! This is so Ronaldo!’ 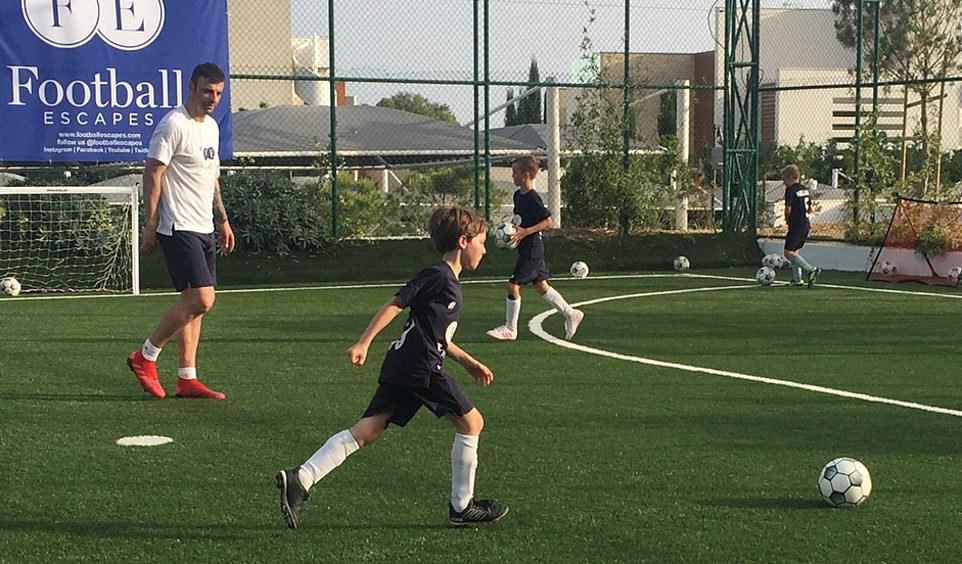 Rob’s son Joseph in action during a training session, as Berbatov looks on

Across 25 acres of beachfront gardens, Parklane has three epic pools (one with filtered sea water), a state-of-the-art spa and gym, five superb restaurants, a kids’ club with its own castle, and 300 metres of sandy beach. All the fixtures and fittings in the sumptuous rooms are furnished by Harrods.

What marks Football Escapes apart from other holidays with football thrown in is that they are only based in top hotels, and every course is led by a ‘Legend Coach’.

Our team sheet includes Jamie Redknapp, Michael Owen, Joe Cole and ex-England captain Rio Ferdinand, who is a partner in the business.

The boys (and girls) get kitted out in personalised strips, then train for two hours each afternoon on UEFA-rated astroturf. 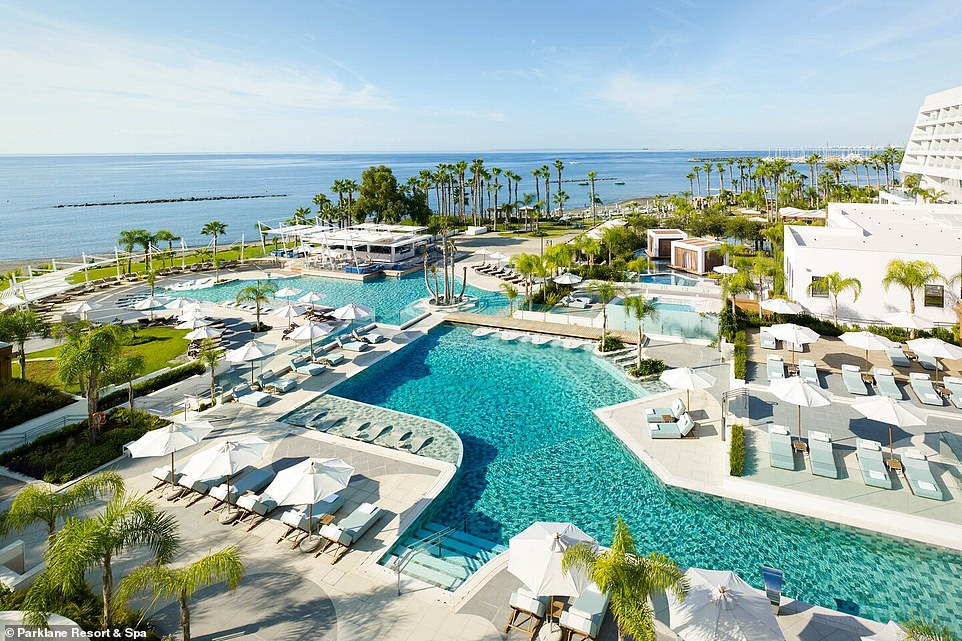 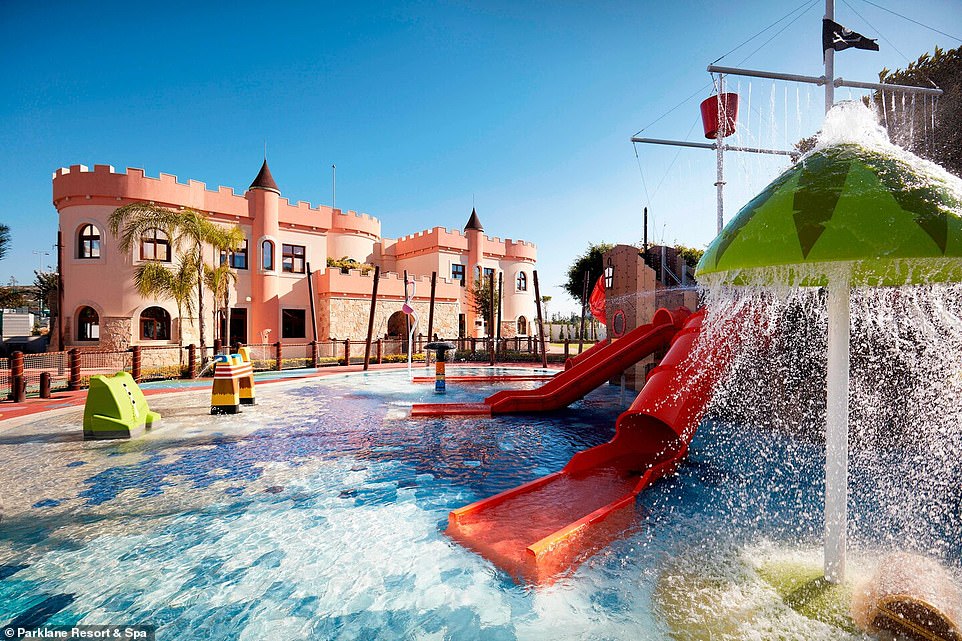 A shot of the swimming pool at the kids’ club, which comes complete with flumes and a castle

Dimitar is supported by Joe Butler and Jamie Cook, who both work at Chelsea FC’s elite training centre in Surrey. The children are put through high-intensity, Academy-level skills drills and tactical tuition.

And it works because Joseph improves dramatically during the week.

With the football condensed into the late afternoon due to the heat, it leaves plenty of time to explore outside the compound.

Cyprus is vast and varied, super-friendly and full of history, which is essential, not least for Emma, who hands out five-star reviews if a trip includes dusty ruins and dark churches.

One morning, we take the bus to the ancient ruins of Amathus, a city dating from 1100BC. The grown-ups find it fascinating, but Joseph would be more captivated by a concrete football stadium built in 1990AD. 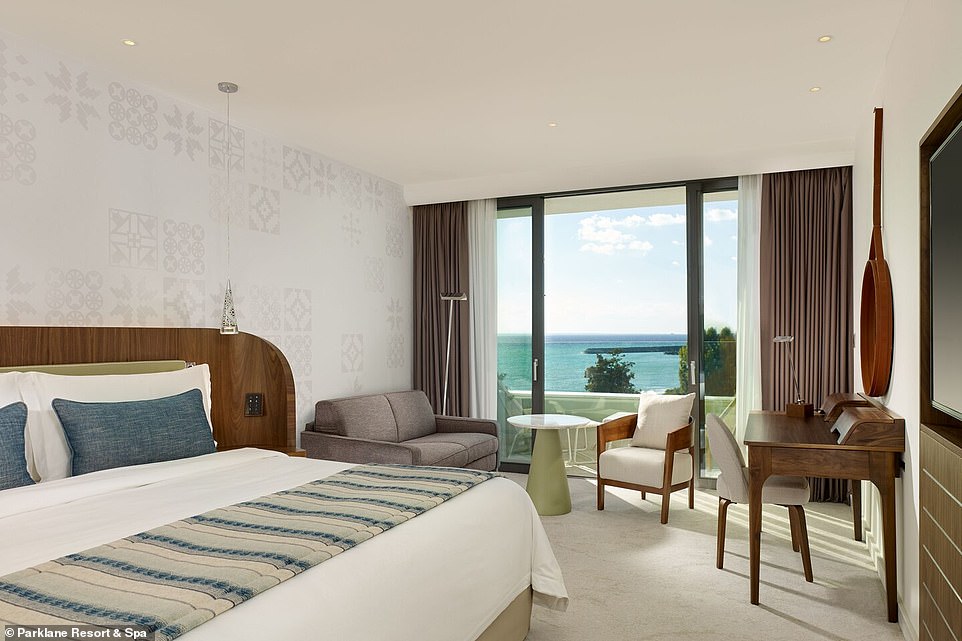 All the fixtures and fittings in the sumptuous hotel rooms are furnished by Harrods and the resort owner is Russian. Above, one of the king rooms with a sea view 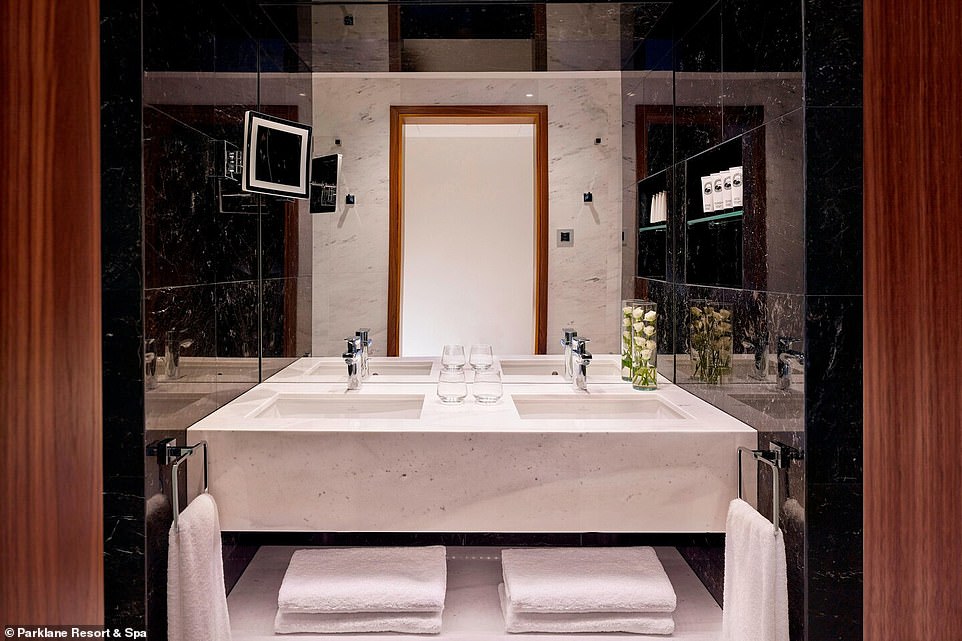 An example of the bathroom in the superior room category, complete with marble tiles and fresh flowers

We then walk around the Old Town of Limassol and Lemesos Castle with its medieval museum. The collection of artefacts is modest, but nonetheless interesting. My pick is the skeleton of a soldier from 1570 with his head, feet and hands missing.

A controversial 2013 government scheme to jumpstart the economy has brought foreign money gushing into the property market. Most of it is Russian.

The scheme is known as the ‘golden passports’ land grab because anyone who puts €2 million into a development gets a Cypriot passport and, therefore, EU citizenship. Which, in footy speak, seems a little offside.

But all seems fine at the Russian-financed Parklane. After each training session, Berbatov fields a Q&A session, and in one answer he reveals the mantra that helped him succeed. ‘Talent is not enough. You must work hard.’

Not exactly ground-breaking advice — but it’s a winning strike for a spellbound Joseph.

Inspiring Travel Company (inspiringtravelcompany.co.uk; 01244 432422) offers a seven-night break at the Parklane Limassol, Cyprus, from £6,845 per family (with one child under 12), including flights and transfers.