Home » Travel » 22 of the Smallest Towns in America 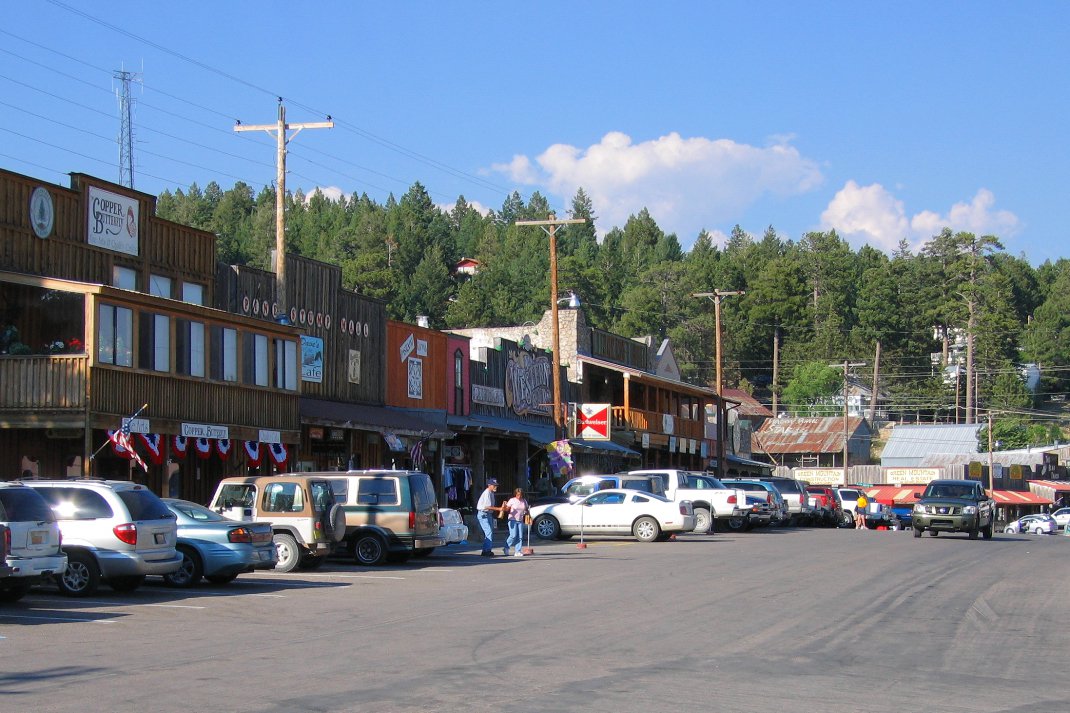 Small town America has a charm all its own, often showcasing the best regional food, unique activities, untouched nature, and a simpler way of life. Across this great, vast nation countless tiny towns, where the population hovers somewhere between just a handful of people (if that) and perhaps a few hundred or more based on the latest census data and recent estimates, have a great deal to offer in the realm of fascinating history and facts. (In some cases, Small Towns Have Shaped the Course of American History.)

Population: 2,607
Once a railroad town with a locomotive yard, Gorham is now known for Moose Brook State Park, a scenic spot where it is possible to spot its namesake animals grazing. Popular for camping and fishing in summer and skiing in winter, Gorham, with its sprawling Great Glen Trails Outdoor Center located at the base of Mount Washington, attracts outdoor lovers year round. It also has the newly renovated Medallion Opera House, which seats 224 and hosts local talent and community events.

Population: 1,654
Incorporated in 1779, Hancock is named for its most famous business owner, and the first signer of the Declaration of Independence, John Hancock. A fascinating historic community in the Monadnock region, almost every building on Main Street in downtown Hancock is listed on the National Register of Historic Places. The Hancock Inn, built in 1789, is the oldest inn in New Hampshire, one of the oldest in New England, and has a fascinating history.

Related: The Oldest Building in Each State

Population: 1,180
The postcard-perfect town of Craftsbury, located in northeastern Vermont, is a place of white picket fences and family-run farms set amid rolling hills. The region has been described by TripAdvisor as one of Vermont’s best kept secrets, thanks to the people, the food, and the refreshing lifestyle. In the spring, maple sugaring is a popular activity. There is much for the area’s adventure enthusiasts to do during the remainder of the year, as evidenced by the area’s Craftsbury Outdoor Center.

Population: 1,101
Home to McCloud Falls, and its three spectacular tiers along the McCloud River, McCloud is an ideal place for summer swimming and trout fishing in the nearby Sacramento and Klamath rivers. Climbers and hikers flock to the town en route to Mount Shasta, Castle Crags or Trinity Alps, all of which are in the area. Its entire downtown — 130 acres and 17 buildings dating from 1896 to 1963 — is on the National Register of Historic Places.

Population: 932
Located in a region that was once used as hunting grounds by the Pawnees, Red Cloud has since become a fascinating place for literary buffs thanks to one of its most famous past residents, author Willa Cather. In 1884, Cather moved to Red Cloud and the community became the inspiration for Cather’s novels. Today, several of the 19th century buildings described in Cather’s books are part of the Willa Cather Historic District, the largest district devoted to an author.

Population: 876
Situated at the convergence of three glacial rivers, Talkeetna has always been a popular base for outdoor excursions. Historically, it has been a mining town and trading post, and an early 20th century gold rush saw it become a riverboat steamer station. Popular activities here include zip lining and fishing, or simply walking along the waterfront taking in the mighty Susitna River. On clear days you can see the Alaskan Range and Denali in the distance. Downtown Talkeetna is also home to quaint shops, local breweries and restaurants.

Population: 721
The rural farming community of Plains is most famous for being the birthplace of Jimmy Carter, the 39th president of the United States. Today, it’s host to the Jimmy Carter National Historic Site, which includes the former Plains High School, Carter’s 1976 presidential headquarters and his boyhood farm. The Plains Historic Inn includes seven period suites built by President Carter and others, which are authentically furnished to represent each decade from the 1920s to the 1980s.

Population: 748
There are a number of high points in Atlanta. One is Mr. Muffin’s Trains, a store that includes a massive display of O Gauge model trains guaranteed to make any train lover drool. The other is Lisa’s Pie Shop attracting residents from all over Indiana thanks to its award-winning creations, including ‘pies in a jar’ as well as fresh breads, quiches, and cookies. Each year in the fall, this tiny town hosts the New Earth Festival, an event that brings together about 600 artisans and more than 100,000 visitors.

Population: 698
A village within the Lincoln National Forest, Cloudcroft’s 8,600-foot elevation, which makes for mild summers, attract visitors from West Texas and New Mexico. Cloudcroft’s history dates back to about the 1890s. Today, popular activities include golf, tennis, hiking, biking, skiing, horseback riding, and fishing. The area is also known for the history of the Mescalero Apaches at the Sacramento Mountains Museum & Pioneer Village.

Population: 650
About 25 minutes south of Nashville is Leiper’s Fork, a thriving artist’s community. The hip town is made up of about 12 buildings that include country diners, gift shops., antique shops, and several high-end art galleries. Leiper’s Fork also hosts numerous music festivals and events each year and even a model airplane competition. It’s also know for quirky events like movies under the stars at Leiper’s Fork Lawnchair Theatre.

Population: 577
Incorporated in 1962, Sugar Hill is named for the large groves of sugar maple trees found within the community’s limits. A 17-square-mile outdoorsman’s paradise, Sugar Hill gives its residents clean air and stunning views of the White and Green Mountains from atop Sunset Hill Ridge. History buffs can pop into the Sugar Hill Historical Museum and in the spring the community is awash in wildflowers.

Population: 550
Once a logging town, Helen reinvented itself as a replica of a Bavarian alpine town, when the industry experienced a decline. Nestled in the Appalachian Mountains, the community is now known for its charming Bavarian-style buildings and vineyards. Nearby Unicoi State Park is home to a lake and campsites. Helen is also home to the Habersham Winery, which has been producing award-winning wines since 1983 and is one of the state’s oldest and largest wineries.

Population: 536
A village named after Makanda, a local Indian chieftain, this tiny community hosts a variety of festivals throughout the year. The Makanda Springfest is an annual, two-day event showcasing local artists and live music, while the Makanda Vulture Fest, in October, celebrates the migration of the black vulture and the turkey vulture to the region. The town itself is full of artists and entrepreneurs, and many unique shops and businesses along its boardwalk.

Population: 541
Listed on the National Register of Historic Places, Bell Buckle traces its roots back to 1852. Now a thriving arts community, it has rows of unique shops and eateries and is home to many area festivals. Unique features include The Bell Buckle Cafe, which has become a hub for musical talent from all over Tennessee. The town itself is surrounded by farms, rolling hills, and walking horse ranches.

Related: 30 of the Oldest General Stores in America

Population: 400
Named for the Marshalls, four brothers who established a dairy industry in the area in the 1850s, the small town later became a stop on the North Pacific Coast Railroad. Located on the pristine Tomales Bay, along a sleepy stretch of California’s Highway 1 about an hour north of the Golden Gate Bridge, Marshall is an oyster-lovers paradise. Hog Island Oyster Company serves (or ships) world-famous fresh, hand-raised, sustainable raw and barbecued oysters and the The Marshall Store, another legendary oyster venue, serves locally raised fare. When not slurping oysters, Tomales Bay offers kayaking and midnight bioluminescence tours.

Population: 291
Home to 19th century buildings, a Civil War museum and John Brown’s Fort (a key site in an 1859 abolitionist raid), Harpers Ferry is also the location of the the meeting of the Potomac and Shenandoah rivers. The Appalachian Trail Visitor Center is another top attraction that includes educational exhibits. At Harpers Ferry National Historical Park there are living history demonstrations and workshops throughout the year focused on 19th-century trades such as blacksmithing and tin-making.

Population: 169
Founded in the early 1800s by a group of German religious dissenters who wanted to create a utopian community, Zoar thrived for more than 80 years, making it one of the most successful settlements in this country’s history. Today, it still gives off a historical vibe, with museums, early American architecture, and a quaint village. The museums display artifacts detailing Zoar’s evolution from an 1817 communal settlement for German separatists to a major stop along the Ohio & Erie Canalway in the mid-1800s.

Population: 69
Balltown is home to Iowa’s oldest restaurant, Breitbach’s Country Dining, which has been operated by the Breitbach family since 1852, and continues to be the heart of this small community. Diners enjoy the famed fried chicken and homemade pies. Featured in the documentary “Spinning Plates,” the restaurant received the James Beard Foundation America’s Classic award. Balltown is also just south of stunning views of the Mississippi River Valley that stretches into the hills of southwest Wisconsin.

Population: 57
Each spring and summer, Ohiopyle becomes a mecca for outdoor adventurers with fly fishing, white water rafting, and hiking on the Laurel Highlands trail. Located within the surrounding Ohiopyle State Park and along the Great Allegheny Passage, the town also has a network of hiking and biking trails through the Allegheny region of the Appalachian Mountains.

Population: 32
Located at the confluence of the Dead and the Kennebec rivers, The Forks is popular with Maine’s whitewater rafting enthusiasts. Numerous companies within the town also lead guided ATV tours, and mountain biking, rock climbing and snowshoeing excursions. In the fall the area is known as a leaf peeper’s paradise and come winter it’s an ideal place for snowmobiling.

Population: 22
With four restaurants for its 22 residents — more per capita than any other U.S. town — the tiny hamlet of Dorset dubbed itself the “Restaurant Capital of the World.” The town, which is 6 miles northeast of Park Rapids, also boasts the Heartland State Trail, a 49-mile multi-use trail that runs from Park Rapids to Cass Lake.

Population: 1
No list of small towns would be complete without at least mentioning Monowi. Established in 1902 when the railroad extended into the area, it’s the only incorporated town in the country with a population of one. Elsie Eiler, the town’s lone resident, pays herself to serve as the town’s mayor, clerk, treasurer, librarian, and bartender at local watering hole named — what else? — Elsie’s Tavern.

Related: The Oldest Bar in Every State