Organelles are small, specialized structures in cells which operate like organs by carrying out specific tasks. 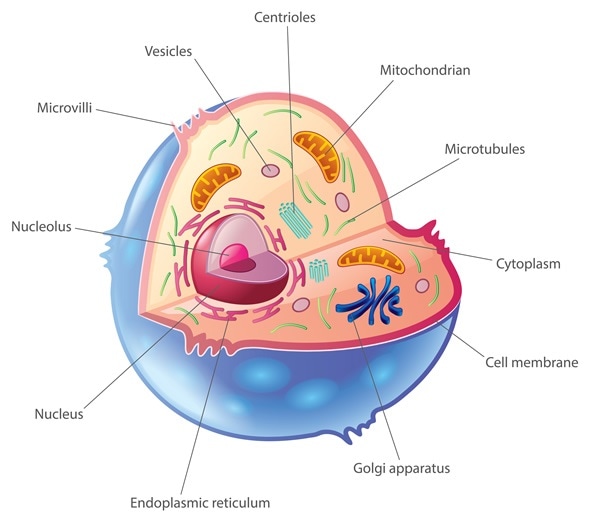 Some key organelles are highlighted below:

The presence of a defined nucleus distinguishes a eukaryotic from prokaryotic cell. It controls all cellular activity and contains the cell’s genetic information. With the exception of translation, all steps of gene expression (including DNA replication and transcription) occur here, thereby allowing careful gene regulation in eukaryotes.

These are found in animal cells and uncommonly in some lower plant cells. Each centriole is composed of nine short lengths of microtubules each associated with 2 partial microtubules which are clustered together into cylinders. Two of these multi-subunit centrioles are arranged together to form an organized centrosome.

Centrosomes are involved in mitosis as the main microtubule organizing center and is required to build the mitotic spindle.

This double-membraned plant organelle in is similar in some ways to the mitochondria of animal cells. The outer membrane of the chloroplast is freely permeable to small molecules via porins unlike the inner membrane which allows molecular passage via specific membrane transporters.

The chloroplast has a third membrane – the thylakoid membrane.  This is required for the electron transport chain in order to generate energy (ATP).

The chloroplast is responsible for the chemiosmotic reactions by which carbon dioxide is converted into carbohydrates and amino acids, fatty acids amongst other macromolecules.

These are cell protrusions involved in motion – when they beat, flagella propel an entire cell forwards whilst cilia brush material across an area.

Both are constructed of a cylindrical arrangement of 9 filaments consisting of a complete and a partial which differ in length. There are also two additional microtubules which form the center of the bundle.

The mechanism of motion involves energy (ATP) and the sliding of microtubules past one another – the action occurs when cross-bridges of the motor protein dynein extend from the complete microtubule of one filament to the partial microtubule of the adjacent filament.

This organelle is a single membrane categorized as smooth or rough ER. The core structural difference is the presence of ribosomes embedded on the outer membrane surface of the rough ER – thus the rough ER is key in protein synthesis. In contrast, the smooth ER has no ribosomes and is involved in lipid synthesis.

This organelle is composed of stacks of flat membranous sacs (cisternae) and its involved vesicles. The Golgi complex receives macromolecules such as proteins from the ER and further acts on them by processing and subsequently sorting them for transport to their destinations.

These are the main catabolic organelle in eukaryotic cells. They contain hydrolyticenzymes to digest macromolecular cell components such as polysaccharides and nucleic acids. All of these enzymes are within the lysosome at an acidic pH maintained by an ATPase which pumps protons in from the cytoplasm.

Numerous degradative pathways involve lysosomes – phagocytosis, endocytosis and autophagy. Together, these pathways encompass degradation of both external and internal components.

These double-membraned organelles are crucial in generating energy in eukaryotic cells.

The inner membrane is highly folded into cristae. Its impermeability to most small ions and molecules maintains the proton gradient for ATP synthesis.

In contrast, the outer membrane is freely permeable to small molecules due to the presence of porins.

Additionally, the mitochondrion is responsible for the production of some steroids, processing of calcium ions and governing cell death.

This organelle is assembled of a small and large subunit each composed of ribosomal RNA molecules and proteins. Ribosomes may either be free in the cytoplasm or embedded on the outer surface membrane of the rough ER. Their functionis to act as the platform for synthesize protein synthesis from their constituent amino acids..

These are membrane-bound, fluid-filled structures most common in plant and fungal cells required for molecular degradation and storage, detoxing and waste management. They maintain turgor pressure in the cell, thereby providing support and structure.

Deborah holds a B.Sc. degree in Chemistry from the University of Birmingham and a Postgraduate Diploma in Journalism qualification from Cardiff University. She enjoys writing about the latest innovations. Previously she has worked as an editor of scientific patent information, an education journalist and in communications for innovative healthcare, pharmaceutical and technology organisations. She also loves books and has run a book group for several years. Her enjoyment of fiction extends to writing her own stories for pleasure.