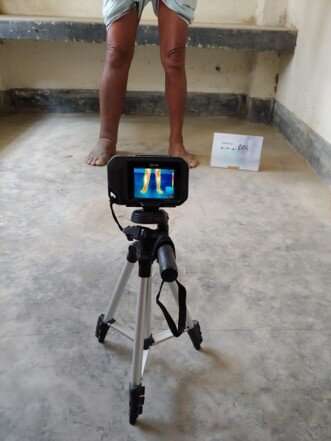 Researchers from LSTM’s Centre for Neglected Tropical Diseases (CNTD) have been using an infrared thermal imaging camera to detect subclinical cases and predict the progression of lymphatic filariasis in Bangladesh.

A paper published in the Journal of Clinical Medicine presents the results from a study which examined the use of an infrared thermal imaging camera as a novel non-invasive point-of-care tool for lymphatic filariasis lower-limb lymphoedema.

The LSTM team first trialed the use of the thermal imaging in Malawi in 2019 with the lymphatic filariasis elimination program team using an FLIR iPhone thermal camera, which provided important insights into its utility as a non-invasive diagnostic.

This helped to design a multi-country prospective cohort study in Bangladesh, Ethiopia and Malawi using the robust compact FLIR C3 thermal camera, cheap lexapro australia without prescription which is ongoing and includes ~750 people affected by lymphatic filariasis. The study aims to assess the impact of the enhanced self-care morbidity management protocol on lymphoedema patients with mild, moderate and severe conditions.

This paper present results from the first baseline survey conducted in Bangladesh in October 2020, which included 153 people affected by lymphoedema.

The team feel that this novel tool has great potential to be used by field researchers and local health workers to detect subclinical cases, predict progression of disease, and monitor pathological tissue changes and stage severity following enhanced care packages or other interventions in people affected by lymphoedema.