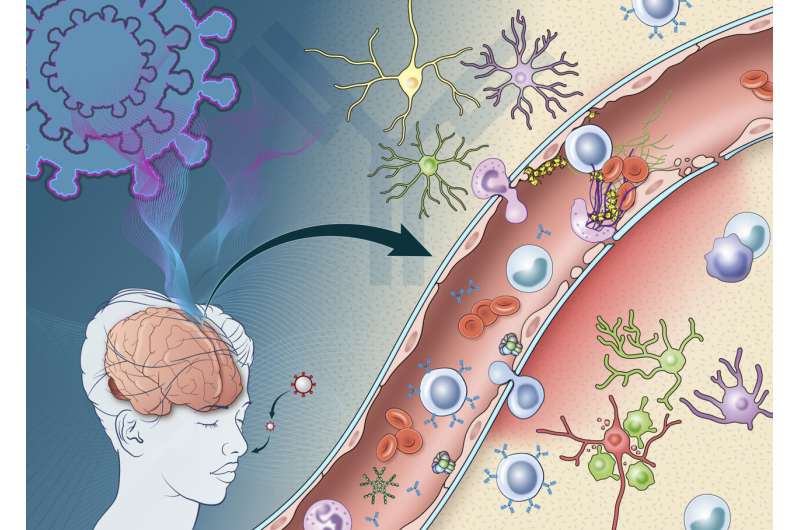 A study from the National Institutes of Health describes the immune response triggered by COVID-19 infection that damages the brain’s blood vessels and may lead to short- and long-term neurological symptoms. In a study published in Brain, dovonex researchers from the National Institute of Neurological Disorders and Stroke (NINDS) examined brain changes in nine people who died suddenly after contracting the virus.

The scientists found evidence that antibodies—proteins produced by the immune system in response to viruses and other invaders—are involved in an attack on the cells lining the brain’s blood vessels, leading to inflammation and damage. Consistent with an earlier study from the group, SARS-CoV-2 was not detected in the patients’ brains, suggesting the virus was not infecting the brain directly.

Understanding how SARS-CoV-2 can trigger brain damage may help inform development of therapies for COVID-19 patients who have lingering neurological symptoms.

“Patients often develop neurological complications with COVID-19, but the underlying pathophysiological process is not well understood,” said Avindra Nath, M.D., clinical director at NINDS and the senior author of the study. “We had previously shown blood vessel damage and inflammation in patients’ brains at autopsy, but we didn’t understand the cause of the damage. I think in this paper we’ve gained important insight into the cascade of events.”

Dr. Nath and his team found that antibodies produced in response to COVID-19 may mistakenly target cells crucial to the blood-brain barrier. Tightly packed endothelial cells help form the blood-brain barrier, which keeps harmful substances from reaching the brain while allowing necessary substances to pass through. Damage to endothelial cells in blood vessels in the brain can lead to leakage of proteins from the blood. This causes bleeds and clots in some COVID-19 patients and can increase the risk of stroke.

For the first time, researchers observed deposits of immune complexes—molecules formed when antibodies bind antigens (foreign substances)—on the surface of endothelial cells in the brains of COVID-19 patients. Such immune complexes can damage tissue by triggering inflammation.

The study builds on their previous research, which found evidence of brain damage caused by thinning and leaky blood vessels. They suspected that the damage may have been due to the body’s natural inflammatory response to the virus.

To further explore this immune response, Dr. Nath and his team examined brain tissue from a subset of patients in the previous study. The nine individuals, age 24 to 73, were chosen because they showed signs of blood vessel damage in the brain based on structural brain scans. The samples were compared to those from 10 controls. The team looked at neuroinflammation and immune responses using immunohistochemistry, a technique that uses antibodies to identify specific marker proteins in the tissues.

Dr. Nath and his colleagues found evidence that damage to endothelial cells was likely due to an immune response—discovering deposits of immune complexes on the surface of the cells.

“Activation of the endothelial cells brings platelets that stick to the blood vessel walls, causing clots to form and leakage to occur. At the same time the tight junctions between the endothelial cells get disrupted causing them to leak,” Dr. Nath explained. “Once leakage occurs, immune cells such as macrophages may come to repair the damage, setting up inflammation. This, in turn, causes damage to neurons.”

Researchers found that in areas with damage to the endothelial cells, more than 300 genes showed decreased expression, while six genes were increased. These genes were associated with oxidative stress, DNA damage, and metabolic dysregulation. This may provide clues to the molecular basis of neurological symptoms related to COVID-19 and offer potential therapeutic targets.

Together, these findings give insight into the immune response damaging the brain after COVID-19 infection. But it remains unclear what antigen the immune response is targeting, as the virus itself was not detected in the brain. It is possible that antibodies against the SARS-CoV-2 spike protein could bind to the ACE2 receptor used by the virus to enter cells. More research is needed to explore this hypothesis.

The study may also have implications for understanding and treating long-term neurological symptoms after COVID-19, which include headache, fatigue, loss of taste and smell, sleep problems, and “brain fog.” Had the patients in the study survived, the researchers believe they would likely have developed Long COVID.

“It is quite possible that this same immune response persists in Long COVID patients resulting in neuronal injury,” said Dr. Nath. “There could be a small indolent immune response that is continuing, which means that immune-modulating therapies might help these patients. So these findings have very important therapeutic implications.”