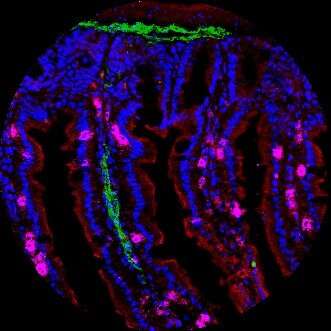 Scientists exploring how our immune system responds to pathogens and cancers have ramped up their attention to CD8+ T cells, which are deployed in response to infections and malignancies and equipped to remember the identities of malicious invaders.

While some of these critical “memory” cells circulate throughout the body, others are known to remain lodged within bodily organs to guard entry sites as part of an entrenched, long-term defense system. A new study led by biologists at the University of California San Diego offers fresh insights on these specialized cells, known as CD8+ tissue-resident memory T cells.

Published June 27 in Nature Immunology, the study is led by Postdoctoral Scholars Max Heeg and John Crowl (now a scientist at Outpace Bio) in Professor Ananda Goldrath’s laboratory in UC San Diego’s School of Biological Sciences, and provides a framework for understanding how tissue-resident memory T cells adapt to distinct tissue environments. The researchers developed a new atlas that describes tissue-resident memory T cells in diverse tissue settings, will retin a get rid of hyperpigmentation boosting the prospects of the development of immune defense strategies to enhance immunity at sites vulnerable to infection.

“By identifying the unique transcriptional pathways and regulators of tissue-resident memory T cells, we can discover novel targets that inform strategic design of vaccines to provide the greatest protection among ‘first responders’ in the tissues where pathogens and tumors begin their expansion,” said Goldrath, who holds the Tata Chancellor’s Endowed Professorship in the Department of Molecular Biology.

While several studies have examined memory cells as they either circulate or become entrenched in organ tissue, little had been known about the role that the surrounding tissue environments play in the process. When an infection takes hold, the immune system activates CD8+ T cells and directs them to infected tissues to survey cells for pathogens. Once the infection clears, the number of pathogen-specific CD8+ T cells declines, but a small number of cells remain as a type of long-term sentry system to bolster immunity against future infections.

The new study examined tissue-resident memory T cells residing in mouse organs such as the kidney, spleen, small intestine and liver. The collective results from across these disparate tissue environments generated insights into how each T cell population is governed by unique processes based on the “tissue of residence.”

Finally, the scientists raise the possibility that future extensions of this research could come in the form of customized engineered therapies: “…these findings collectively raise the possibility of ‘programming’ tissue-tailored immune responses, where immune cells that promote or regulate inflammation could be transcriptionally engineered for trafficking to, retention in and function within a particular tissue.”