A new study, released as a preprint on the medRxiv* server, adds to the sum of evidence that children do not play a key role in the transmission of the severe acute respiratory syndrome coronavirus 2 (SARS-CoV-2), allied loan the pathogen behind the current pandemic of coronavirus disease 2019 (COVID-19).

In the absence of any effective and targeted therapeutics against the virus, non-pharmaceutical interventions (NPIs) played a major role in policies meant to contain the spread of the virus. These included social distancing, business closures, and critically, school and university closures.

The latter has been the subject of much controversy, with many scientists opining that evidence of the involvement of children in viral transmission was scanty. Many have contended that the social and educational, as well as financial, impacts of closing down educational institutions far outweighed any benefit in terms of viral containment. 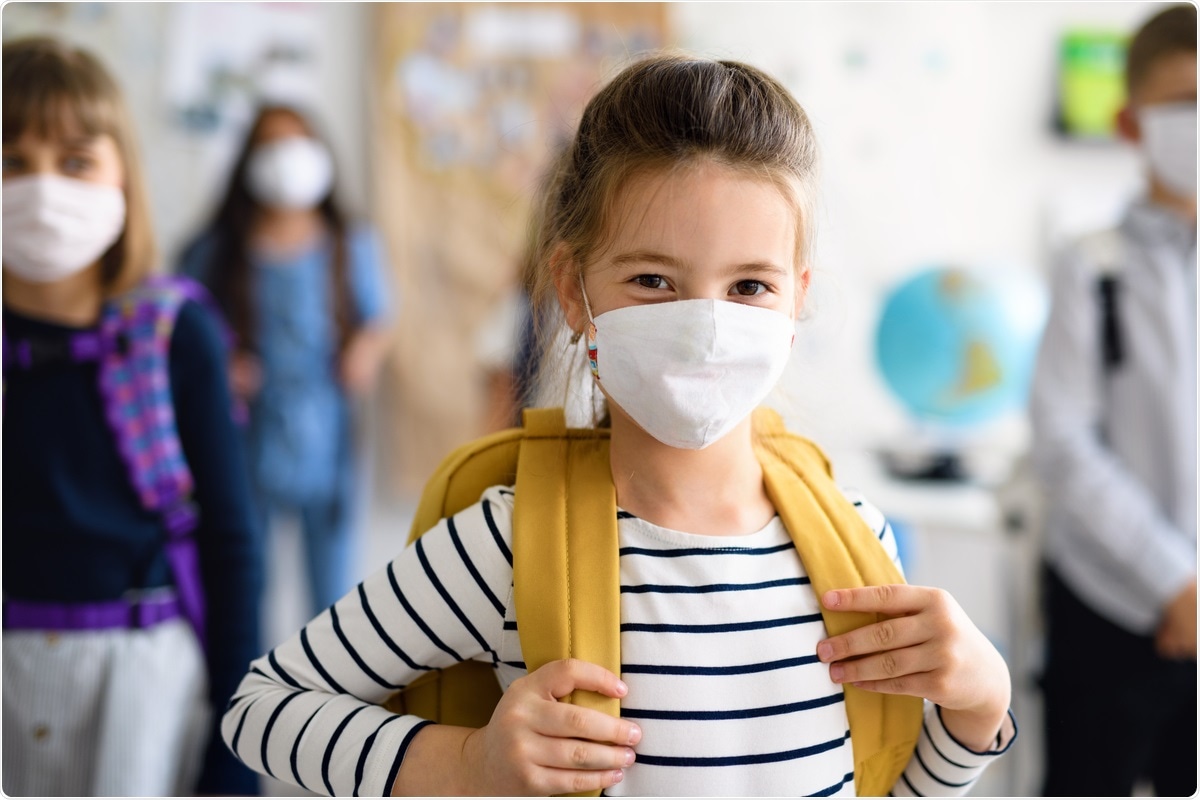 The proportion of cases in children has almost uniformly been low, and most children have a mild form of the disease. Already, UK and Norwegian studies indicate that viral spread among children in primary and secondary schools was very low. The current study aims to extend the area of research into preschools and childcare facilities, caring for children aged 1-6 years of age.

Dealing with very young children, with a high risk of close interactions and difficulty in maintaining hand and face hygiene consistently, these facilities are of particular concern.

The study, carried out in Saxony, Germany, covered NPIs mandated by the State, such as universal wearing of masks by parents, who were not allowed to enter the facility at either drop-off or pick-up times. Staff and children at the centers did not use masks in the absence of any such recommendation by the government.

However, the only children allowed in such centers were those of essential workers, that too, only for emergency care. Staff were vetted for the infection, or for close contact with anyone with the infection, and for any respiratory symptoms, with or without fever, in all of which cases they were not allowed in the centers.

The study included around 320 children, and 230 staff, in 14 childcare centers. While this included almost three of four individuals working at such centers, only a fifth of the children enrolled were actually attending at the time of the study. Just over a tenth of them were siblings.

The median age of the children was four years and that of their parents 37 years. Serological results were available in almost all the parents of these children. For the children, the median household size was about four, while for the childcare workers, it was three.

In the first phase of the study, until the middle of November 2020, only one parent and one of the staff members at the centers developed antibodies to the virus after an infection documented by polymerase chain reaction (PCR) testing. The two cases were at different facilities.

Two stool samples from children were also positive for the virus, one from each of two different facilities, for a prevalence of less than 1%. One was asymptomatic, and a second case was reported from the same center, while the other positive stool sample was not associated with linked cases. The parents in both cases had no history of infection and were seronegative.

The second phase of the study, towards the close of January 2021, saw seropositivity rates rise to 12% and 10% of staff and parents, which comes to 25 and 23 out of 236 and 87, respectively, indicating comparable rates of seroconversion. The parents of children who attended the centers during the period of stringent lockdown had higher seroprevalence rates, compared to those whose children remained at home, at 19% vs. 9%, respectively.

This difference was not seen with the children, however, with comparable prevalences of infection between those whose parents made use of emergency childcare services and the others.

Of the 25 seropositive parents, 20 had a history of infection, and one had a positive household member. The same picture was obtained among childcare workers, with about 80% having had the infection and one having had household contact.

Of the seropositives, ten parents and five staff said they had caught the virus from contact outside the childcare center. There was no difference between detected and undetected infections, however, between parents and childcare staff.

Seroprevalence was higher among administrative childcare workers than those assigned direct childcare duties, at 21% vs. 8%, respectively.

Of 11 participants who were seropositive and were first tested in December 2020, including nine parents, three already showed the presence of antibodies at this time. Thus, the remaining eight seroconverted during the third lockdown, implemented from December 14th, 2020.

Upper respiratory symptoms were present in 36% and 39% of staff and parents during the study period.

Only about 7% of children (15 of 222) had one or more positive stool samples, from eight centers. Overall, there were 22 stool samples containing viral ribonucleic acid (RNA). Possibly related cases were found in four centers, but not beyond three children each.

The ratio of undetected and detected infections in children was almost one, with a history of contact with confirmed infection in almost half the cases.

In 6/14 facilities, no stool samples were positive. Among the 17 with viral RNA in their stool samples, only two had siblings participating in the same study, and both siblings returned negative stool samples. Moreover, five of the 17 had not visited the center at all before or during the period of viral shedding in stool, ruling out the center as the source of their infection.

Six of the 17 children had seropositive parents, though three parents were not tested. Eight of the parents had no antibodies.

There were five centers where 12 of the 17 children were attending childcare at the time that their stools showed viral RNA. Seven of the 12 were linked to one or more cases at four of the five centers.

Over 90% of childcare centers had one or more person who was positive for the virus, but about 60% had isolated cases only, or no cases. Two or fewer linked infections occurred in about a fifth of all facilities, while outbreaks of 3-10 cases occurred in another fifth.

Undetected pediatric cases were attending childcare in seven out of nine cases, with up to one linked case for three of them. The remaining four were linked to larger outbreaks in two facilities.

Of the 14 centers, 11 were put under quarantine at least once. Of the three other centers, three positive stool samples were found, with the children attending the center at the time. All had isolated cases. 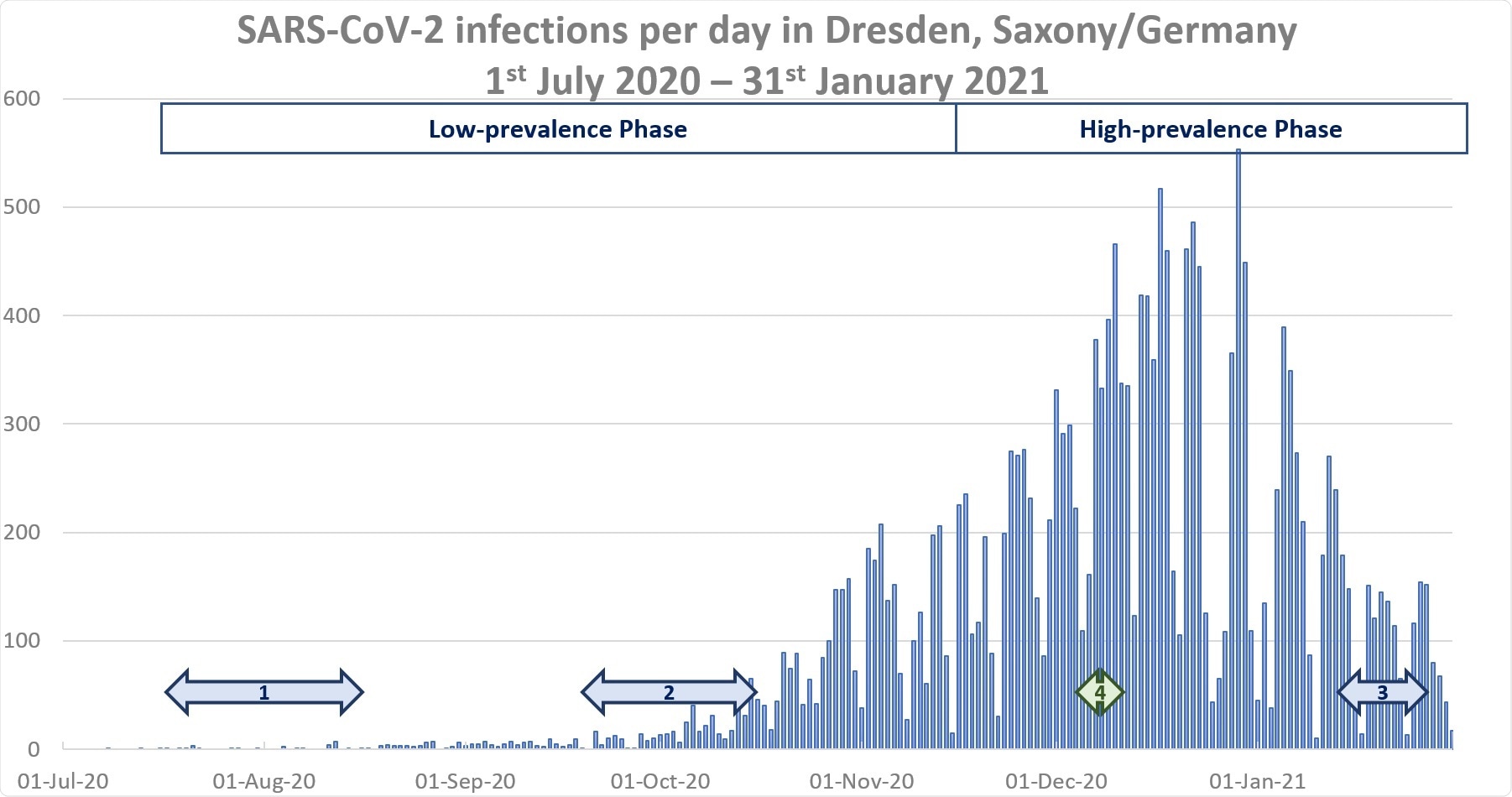 What are the implications?

The study shows the efficacy of the NPIs current in Germany at the time of the study, preventing the hidden spread of the infection. There was only a single case of undetected infection in a child in the first phase of the study who attended the center during the time of infection without any special precautions. Yet, no linked cases were found.

In the second wave, there was a proportional rise in seropositivity, but the number of undetected infections was still lower than expected. Parents and childcare workers showed comparable seroprevalence, but positive stool samples among children were still far fewer than among adults, supporting lower infection rates among children.

Only three linked cases were detected in children, which adds weight to the theory that “childcare facilities are not a major source of uncontrolled clusters.” In fact, siblings seem to be spared in two of the cases, and no secondary case was detected in half of the total pediatric infections.

Parents whose children were at the center during the second strict lockdown were more likely to be seropositive, probably because they were essential workers without the option of working from home. This exposed them to a greater number of contacts at the workplace.

In support of this, fewer children in this situation were positive for the virus.

Again, much more staff at the centers were infected, possibly linked to their occupation, than seropositive parents. This shows that adults spread infection more among themselves than between children and adults, when coupled with the fact that more administrative workers were seropositive, and that children with undetected infection showed very limited capability to spread the virus.

Therefore, hygiene and distancing measures between childcare workers themselves might be the key measures in these institutions and more important than between children and workers.”

The use of serological studies enhances the detection of missed cases in adults at least, though the PCR testing of stool may have impaired the sensitivity of detection in children. The findings, therefore, cast doubt that childcare centers allow a significant asymptomatic spread of SARS-CoV-2, with the needle of suspicion pointing to the adults themselves.

These findings add to the evidence that childcare and educational settings do not play a crucial role in driving the SARS-CoV-2 pandemic.”