Home » Online » can you take diovan and lisinopril together 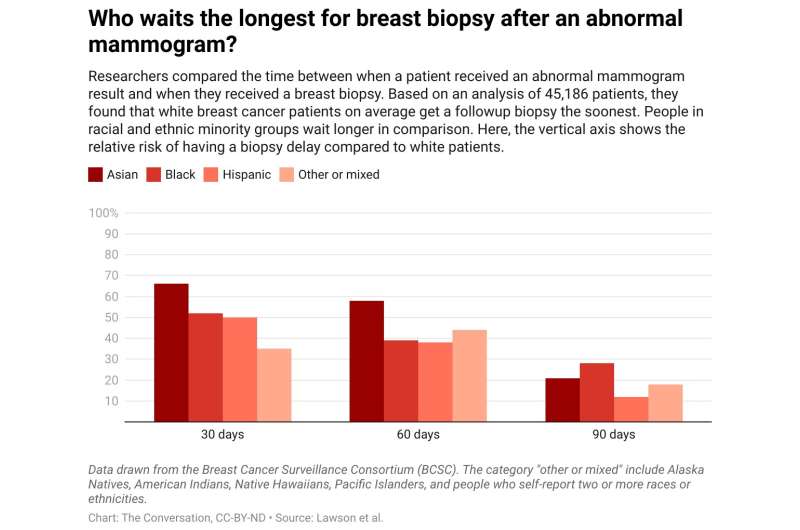 While mammograms are often the first step to detecting breast cancer, patients need additional tests after an abnormal screening result. Further imaging can determine if a finding is truly suspicious for cancer, and sometimes a biopsy is required to confirm a diagnosis. But biopsy delays reduce the benefit of early detection, putting patients at a higher risk of treatment failure and lowering their chances for survival.

Breast biopsies involve removing a small piece of tissue from a suspicious area and examining the sample under a microscope. Once doctors are able to confirm the presence of tumor cells and what type they are, what is naproxen 357 mag they are then able to devise a treatment plan.

But previous studies have not looked at how multiple factors, including at the neighborhood and institutional level, can affect breast cancer care across diverse groups in different geographic locations. And not many studies have evaluated the disparities that may occur within the time-sensitive period between routine screening and an official diagnosis.

As radiologists who study health disparities and population health, we wanted to fill in this research gap. Our recently published study found that patients from racial and ethnic minority groups are more likely to have significant delays in getting a diagnosis-confirming breast biopsy after a mammogram compared with white patients.

We wanted to investigate potential reasons why some patients experienced a delay between when they received an abnormal mammogram result and when they underwent a diagnostic biopsy. So we used data from the Breast Cancer Surveillance Consortium, a network of imaging registries researching ways to improve breast cancer detection. We collected the demographic information of 45,186 patients in six states across the U.S. and analyzed their risk of not receiving a biopsy within 30, 60 or 90 days after getting an abnormal mammogram.

We found that all racial and ethnic minority groups experienced a higher risk of having a biopsy delay of over 30 days compared with white patients. Asian patients had the highest increased risk; they were 66% more likely to get a biopsy more than 30 days after their mammograms. When we looked at biopsy delays of 90 days or more, however, we found that only Black patients had a significantly increased risk—they were almost 30% more likely to experience extended delays compared with white patients.

We found that which screening facility a patient went to had the biggest effect on biopsy delays. This suggests that there are health care setting differences that could be contributing to longer wait times for nonwhite patients. These health care setting differences could include a number of factors, including whether there is a robust patient navigation system to provide guidance throughout the care process or the availability of same-day biopsies.

This persistent difference in risks suggests that unmeasured factors such as structural racism, or ongoing policies and practices that lead to inequitable resource distribution for racial and ethnic minority communities, could also account for these differences. This could include health care coverage inequities with higher out-of-pocket costs, or policies that restrict access to higher quality care.

Structural racism may also have contributed to the facility-level disparities we saw. For example, facilities where more white people went to may have had additional resources allocated to patient navigators and same-day services that would have facilitated more timely biopsies.