Weekly COVID-19 cases in children dropped again, but the count remained above 200,000 for the fifth consecutive week, according to the American Academy of Pediatrics and the Children’s Hospital Association. 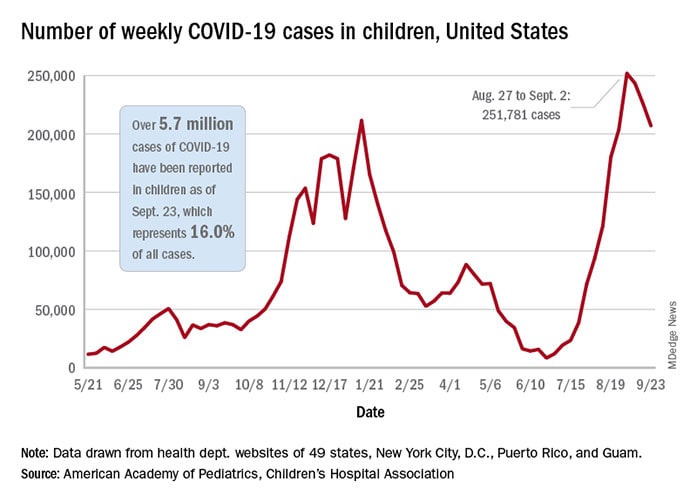 Over that 5-week span since the end of August, in fact, the United States has added over 1.13 million new cases, or just under 20% of all cases (5.7 million) in children during the entire pandemic, based on the data in the AAP/CHA joint weekly report on COVID in children.

In the most recent week, Sept. 17-23, benadryl dosage for colds there were almost 207,000 new cases of COVID-19 in children, which represented 26.7% of all cases reported in the 46 states that are currently posting data by age on their COVID dashboards, the AAP and CHA said. (New York has never reported such data by age, and Alabama, Nebraska, and Texas have not updated their websites since July 29, June 24, and Aug. 26, respectively.)

The decline in new vaccinations among children, however, began before the summer surge in new cases hit its peak – 251,781 during the week of Aug. 27 to Sept. 2 – and has continued for 7 straight weeks in children aged 12-17 years, based on data from the Centers for Disease Control and Prevention.

There were about 172,000 COVID vaccine initiations in children aged 12-17 for the week of Sept. 21-27, the lowest number since April, before it was approved for use in 12- to 15-year-olds. That figure is down by almost a third from the previous week and by more than two-thirds since early August, just before the decline in vaccinations began, according to the CDC’s COVID Data Tracker.

“Although we have seen slight improvements in COVID-19 volumes in the past week, we are at the beginning of an anticipated increase in” multi-inflammatory syndrome in children, Margaret Rush, MD, president of Monroe Carell Jr. Children’s Hospital at Vanderbilt University, Nashville, Tenn., said at a recent hearing of the House Committee on Energy and Commerce’s Oversight subcommittee. That increase would be expected to produce “a secondary wave of seriously ill children 3-6 weeks after acute infection peaks in the community,” the American Hospital Association said.

Meanwhile, Rush noted, there are signs that seasonal viruses are coming into play. “With the emergence of the Delta variant, we’ve experienced a steep increase in COVID-19 hospitalizations among children on top of an early surge of [respiratory syncytial virus], a serious respiratory illness we usually see in the winter months,” she said in a prepared statement before her testimony.