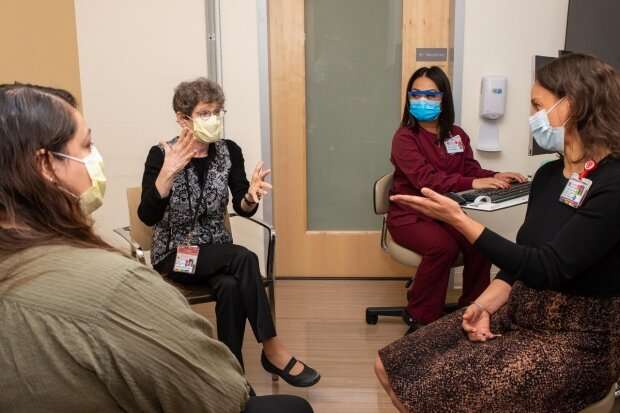 In the summer of 2016, Stanford Health Care’s primary care clinic in Santa Clara launched Primary Care 2.0—a team-based model for primary care developed by Stanford Medicine researchers. The goal was to tackle an epidemic of physician burnout by transforming health care delivery from the traditional physician-centric model to a team-centric one.

Instead of dealing with most of the patient workload themselves, physicians at the clinic collaborate closely with members of a team of medical providers, buy cheap vermox without prescription d including nurses, pharmacists and dietitians.

More than five years later, the Primary Care 2.0 model has proven beneficial for patients and for primary care physicians, but only if the model is sustained, according to a recent study by Stanford Medicine researchers.

“It turns out physicians are very resilient, but if their practice isn’t serving them, it can feel impossible,” said Megan Mahoney, MD, the chief of staff of Stanford Health Care who also led the care model’s design and implementation. “Stanford Medicine put forward Primary Care 2.0 as an ideal model for team-based care with the explicit intent of solving this issue.”

Primary Care 2.0 is based on a health care industry goal known as the quadruple aim, which consists of improving quality of care, cost savings, the patient experience and physician and staff well-being. The quadruple aim is an expansion of the triple aim, which incorporated only the first three goals.

“A lot of us have talked about the problem of burnout and the lack of joy in practice in many primary care practices,” said Thomas Bodenheimer, MD, a professor of family medicine at the University of California-San Francisco and one of the physicians who developed the quadruple aim.

For their research, Mahoney and her colleagues wanted to see if the 2.0 model was helping to prevent physician burnout. They surveyed 188 staff members and clinicians from the Santa Clara clinic and four other Stanford clinics that were not using the new team-based model. Individuals were polled before Primary Care 2.0 was launched, then nine, 15 and 24 months after it was implemented.

The evaluation showed that expanding the roles of medical assistants, increasing their ratio and adding nonphysician specialists, such as pharmacists and dieticians, to the mix significantly enhanced team development, according to the study, which was published Sept. 19 in the Annals of Family Medicine. Jonathan Shaw, MD, clinical associate professor of primary care and population health at Stanford, is the lead author. Mahoney is the senior author.

In the researchers’ analysis, team development was significantly and inversely associated with burnout.

Researchers also found that care quality and patient satisfaction levels at the Santa Clara clinic remained similar to those at the control sites. In addition, the labor cost per visit at the Primary Care 2.0 site was lower than it was at the other clinics, and these costs decreased over the four years following the model’s launch.

Increased use of advanced practice clinicians—meaning nurse practitioners and physician assistants in place of physicians—offset the added cost of increased medical assistant staffing and the larger medical team.

The collective gains, however, did not translate to a sustained, statistically significant reduction in burnout. At nine and 15 months, less burnout was observed, but not at 24 months.

This shift was likely a result of budget cuts at 16 months that shifted the ratio of medical assistants to physicians from 2:1 to 1.5:1, Mahoney said. When medical assistants no longer had time for tasks assigned under the 2.0 model, those tasks fell back on the physicians.

The researchers hypothesize that maintaining the intervention’s original staffing levels would have led to continued burnout reductions. Without the support, doctors in these clinics often handle administrative tasks, such as completing paperwork and dealing with insurance companies, on top of seeing large numbers of patients, Bodenheimer and others said.

“Physician burnout has a substantial impact on access as well as the cost and quality of medical care,” said Tait Shanafelt, MD, chief wellness officer of Stanford Medicine and the Jeanie and Stew Richie Professor.

Team-based care models that address the primary causes of burnout—excess work-burden, inefficiency and problems in the work environment—are key to reducing the epidemic of physician burnout, he said.

Primary Care 2.0 is designed to do that, in part by expanding the role of the medical assistant, which has typically been limited to taking patients to exam rooms and checking their vital signs. Under the 2.0 model, the ratio of medical assistants to physicians increased from the standard 1 (or less) to 1 to 2:1.

The increased ratio allows physicians to have more in-depth and focused conversations during patient visits, while their medical assistants take clinical notes and become better informed about the patient’s health and care plan so they can address follow-up patient concerns.

The 2.0 model also includes more on-site specialists, such as a clinical pharmacist who coordinates medications; a dietitian who provides nutritional assessments and counseling about such conditions as diabetes; a physical therapist who offers individualized care; and a behavioral health clinician who addresses patient psychological concerns and social determinants of health.

The model is especially helpful for patients with multiple medical or social problems. Once a week, the entire care team discusses patients who are struggling to manage their health, a practice that Korina De Bruyne, MD, a clinical assistant professor of medicine and physician at the Santa Clara clinic, said she has found helpful.

“Some patients really require a multidisciplinary approach,” De Bruyne said. “It was very helpful to have that all under the same roof, which lessened the physician’s load and enabled us to divide and conquer.”

In addition, Mahoney said, physicians who aren’t burned out have more energy to foster strong relationships with patients, which has been shown to improve their health outcomes.

The COVID-19 pandemic, Mahoney said, exacerbated physician burnout, making it more vital than ever to shift Stanford’s primary care clinics over to a team-care model.

Data from Stanford clinics shows that the number of patient portal messages rose by 38.5% from March 2020 to March 2021, putting extra strain on the primary care doctors at the front line of patient care, Mahoney explained.

“When patients are scared, when they’re nervous, when they have questions about COVID testing, all those questions went to that primary care doctor via a patient portal message,” she said, noting that at the Santa Clara clinic, medical assistants could address about 30% of these messages, reducing the burden on physicians.

Starting in 2018, Mahoney and her colleagues began rolling out components of Primary Care 2.0 to the four other Stanford clinics, and they plan to continue implementing it across Stanford’s health care system.