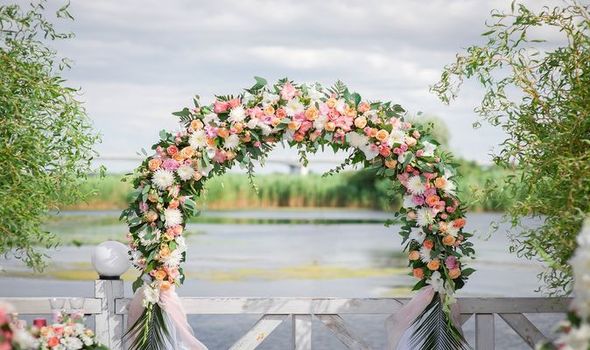 Her wedding took place in December last year after she was given the gift of life by an organ donor. Katy was just two days from death when she received a lung transplant in November 2018. She had been born with cystic fibrosis, which saw her lungs deteriorate. But a pair of donor lungs were found just in time and she made an amazing recovery. Katy, 36, and Carl, 50, are celebrating their first wedding anniversary. She said: “I feel incredibly lucky to have been able to get married to Carl.

“For most couples their first anniversary is special, but for us it’s extra special because we feel so lucky to have been able to get married at all.”

Katy, who lives in Yeovil, Somerset, was diagnosed with cystic fibrosis at seven weeks old. She said: “My parents were devastated. Doctors told them I would not live past five.” But thanks to advances in medications and daily physiotherapy to clear her lungs of mucus Katy defied expectations.

She even attended university but in her 20s her health started to deteriorate. She explained: “I was in and out of hospital with chest infections and kept having antibiotics to clear them up. Then in December 2014 I caught the flu. I’d had the flu jab but still had it really badly and it destroyed my lung function. I was in hospital for weeks on oxygen and never really recovered. That’s when the doctors started to say I needed a lung transplant.”

A few months later Katy was put on the transplant list. She waited nearly three years before a donor was found. Katy said: “The operation was more difficult because as a baby I’d had part of my lung removed and there was lots of scarring. I was so ill afterwards I was put in an induced coma and then back on to the lung machine after I woke up, cymbalta 30 mg notice to help me recover.”

She spent seven weeks in hospital before she was finally allowed home to fiancé Carl, a carpenter. The couple tied the knot in December last year.

Katy said: “It was so emotional when I was able to walk down the aisle after everything I’d been through. I felt like I’d been reborn, and given a second chance at life. It was bittersweet as I know that my happiness is because of someone else’s loss. It’s a brave decision to donate a loved one’s organs, at the time of such tragedy.

“As I exchanged vows I knew I shouldn’t still be alive and yet I was. And it’s all thanks to my donor and his gift to me. It was a wonderful wedding – we enjoyed every minute of it. I’d gone from being shattered all the time, and needing oxygen just to move around, and now I was full of energy. I felt like the luckiest bride in the world.”