Declining trends in melanoma death rates accelerated from 2014 to 2018 in the United States, even as incidence rates increased for both males and females, according to an annual report by several national organizations.

“Death rates for cutaneous melanoma have declined rapidly in recent years following introduction of new therapies, cymbalta online pharmacy including targeted and immune checkpoint inhibitors, the first of which was approved by the [Food and Drug Administration] in early 2011,” Farhad Islami, MD, PhD, of the American Cancer Society, and associates wrote in the Journal of the National Cancer Institute.

The American Cancer Society, along with the Centers for Disease Control and Prevention, the National Cancer Institute, and the North American Association of Central Cancer Registries, issue a joint report each year to update the incidence and mortality of the most common cancers and analyze short- and long-term trends since 2001.

The incidence of melanoma, however, headed in the opposite direction, rising 1.9% per year for females and 2.2% for males from 2001 to 2017, without the notable change in trend seen with death rates, Islami and associates said. 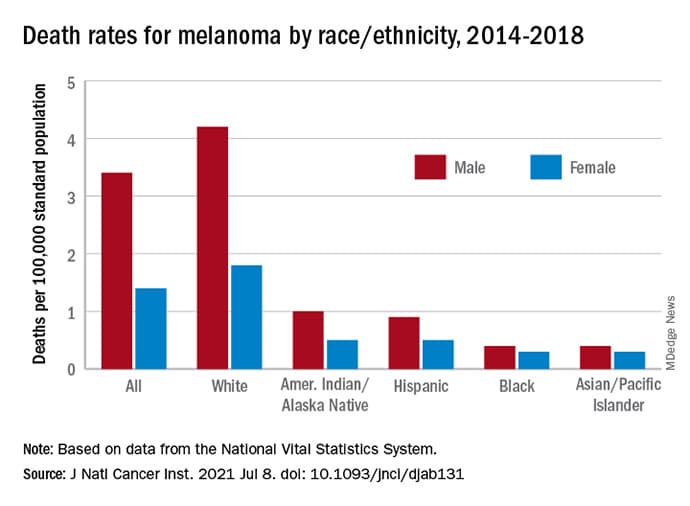 The accelerated decline in death rates in more recent years reflects “a substantial increase in survival for metastatic melanoma,” the participating organizations noted in a joint statement.

Increases in 2-year survival in distant-stage disease averaged 3.1% per year for those diagnosed during 2009-2014, which “slightly preceded the FDA approval of new therapies, likely because of the administration of these therapies through clinical trials and the FDA expanded access programs prior to the approval,” Islami and associates wrote.

The 2-year relative survival for those with nonmetastatic melanoma also improved over the study period, but the increases were much smaller: 0.4% per year for regional-stage disease and just 0.03% localized-stage cases diagnosed in 2001-2014, they reported.

The report was funded by the four participating groups. Six of the 12 investigators are employees of the American Cancer Society whose salaries are solely paid by the society; the other authors had no conflicts of interest to disclose.