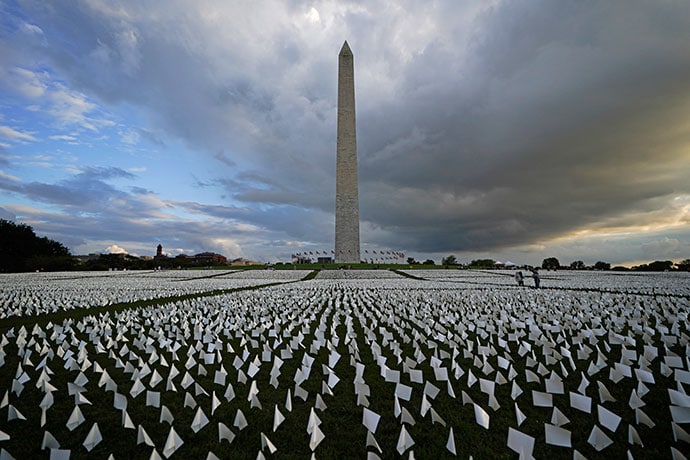 With the Washington Monument in the background, people look at white flags that are part of artist Suzanne Brennan Firstenberg’s temporary art installation, “In America: Remember.”

As the world nears the milestone of 5 million COVID-19 deaths, lexapro methadone memorials large and small, ephemeral and epic, have cropped up around the United States.

In New Jersey, one woman’s modest seaside memorial for her late brother has grown to honor thousands of lost souls. In Los Angeles, a teen’s middle school project commemorating her city’s fallen through a patchwork quilt now includes the names of hundreds more from around the world.

Here’s a look at what inspired some U.S.-based artists to contribute to the growing collection of memorials honoring the nearly 5 million dead worldwide from COVID-19.

Back in June, Suzanne Brennan Firstenberg purchased more than 630,000 small white flags in preparation for staging a massive temporary memorial on the National Mall.

It would be more than enough, she thought, to represent all the Americans who would have succumbed to the virus as the pandemic seemed to be on the retreat.

She was wrong. By the time ” In America: Remember ” opened Sept. 17, more than 670,000 Americans had died as the virus’ delta variant fueled a deadly resurgence. At the end of the exhibit’s two-week run, the number was more than 700,000.

Firstenberg was struck by how strangers connected in their grief at the installation, which ended Oct. 3.

The installation was the second monumental exhibit to remember virus victims that the Maryland-based artist has staged. Firstenberg previously planted nearly 270,000 white flags outside Washington’s RFK Stadium last October to represent the national death toll at the time.

“For the first one, my motivation was outrage that the country could let something like this happen,” she said. “This time it was really to cause a moment of pause. The deaths have been relentless. People have become fully inured to these numbers.”

On Jan. 25, Rima Samman wrote her brother Rami’s name on a stone and placed it on a beach in her hometown of Belmar, New Jersey, surrounded by shells arranged in the shape of a heart. It would have been Rami’s 41st birthday, had he not died from COVID-19 the previous May.

A makeshift memorial quickly grew up after Samman, 42, invited others in an online support group to contribute markers memorializing their own loved ones. By July there were more than 3,000 stones in about a dozen hearts outlined by yellow-painted clam shells.

Samman and other volunteers decided to preserve the memorial because it was located on a public beach and exposed to the elements. They carefully disassembled the arrangements and set them in display cases.

“I knew if we just demolished it, it would crush people,” she recalled. “For a lot of people, it’s all they have to remember their loved ones.”

The displays are now the centerpiece of the Rami’s Heart COVID-19 Memorial, which opened in September at Allaire Community Farm in nearby Wall Township. It includes a garden, walking path and sculptures, and honors more than 4,000 virus victims and growing.

Maintaining the memorial has been both rewarding and tough, as she is still mourning the loss of her brother.

“It’s a double-edged sword because as much as working on the memorial helps, every day you’re exposed to this grief,” Samman said. “It’s a lot of pressure. You want to make sure it’s done right. It can be draining.”

Madeleine Fugate’s memorial quilt started out in May 2020 as a seventh grade class project.

Inspired by the AIDS Memorial Quilt, which her mother worked on in the 1980s, the then-13-year-old encouraged families in her native Los Angeles to send her fabric squares representing their lost loved ones that she’d stitch together.

The COVID Memorial Quilt has grown so big it covers nearly two dozen panels and includes some 600 memorial squares honoring individuals or groups, such as New Zealand’s more than two dozen virus victims.

The bulk of the quilt is currently at the Armory Art Center in West Palm Beach, Florida, with a smaller portion on permanent display at the California Science Center in Los Angeles and another featured at the International Quilt Museum in Lincoln, Nebraska.

Fugate, her mother and a small, dedicated band of volunteers meet Sundays to sew and embroider panels. Fabric and other materials are donated by victims’ families.

Now a high school freshman, she plans to keep the project going indefinitely.

“I really want to get everyone remembered so that families can heal and represent these people as real people who lived,” she said.

Fugate would like to see a more formal national memorial for COVID-19 victims one day, and perhaps even a national day of remembrance.

“It would be amazing to see that happen, but we’re still technically fighting the war against this virus,” she said. “We’re not there yet, so we just have to keep doing what we’re doing. We are the triage. We’re helping stop the bleeding.”