Home » Holiday » Visiting South Australia after the bushfires: ‘Some of the best experiences are completely unaffected’

Most South Australians know the Adelaide Hills town of Lobethal for one thing. Every night in December, large displays of Christmas lights adorn local businesses and homes, and the streets are crowded with busses and cars during the Lights of Lobethal festival.

But last year the tradition ended early. As bushfires ripped through the Adelaide Hills on 20 December, people flying home for Christmas instead saw the Mount Lofty Ranges lit up by a series of uncontained blazes.

Tourism after the bushfires: ‘The whole area is screaming for people to come back’

On the same day, lightning strikes ignited fires on Kangaroo Island that eventually burned 200,000 hectares, or 45% of the island. Residents in both regions lost their homes and businesses, and holidaymakers made last-minute changes to their plans. Now, international bookings as far away as November are being cancelled.

For regions reliant on the tourism and hospitality industries, the aftermath of the bushfires has been catastrophic, but now they’re ready for visitors to return. 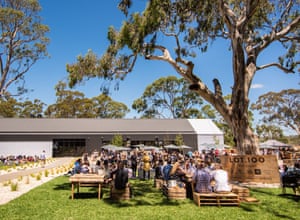 Spooning the long narrow plain on which the city is built, the Adelaide Hills have long been a popular getaway for residents. Early settlers escaped the heat of the city at lavish summer estates or worked the land from humble stone cottages. Today those historic buildings are integrated into growing suburbs surrounded by a charming patchwork of orchards, vineyards and mixed farmland that supplies a thriving community of artisanal food producers.

Many of them were severely impacted by the bushfires. When the smoke cleared, the farmhouse where David Bowley’s family lived was gone, along with this year’s entire crop; 90% of his vines will need to be replanted and won’t produce a viable crop for four to five years. On top of that, he returned to bills from contractors who had been working on the vineyard right up until the day of the fires.

Victoria’s towns reopen after the bushfires: ‘We love to welcome people back’

Fortunately most of his stock was stored at Vinteloper’s shared cellar door. It took a few weeks for customers to return, but when they did they came with offers of support and left with newly purchased bottles. “The wine that’s been sold allows us to sleep at night and know that we can pay our employees and pay our suppliers,” Bowley says. And the emotional support encouraged him to think about the long rebuild.

All but a few businesses in the region are now open again, but the impact of the bushfires will be felt for years to come. It’s why Bowley implores tourists to continue visiting after the news cycle moves on, and to spread the love across the region. “It’s important that people support not only us but also other Adelaide Hills wineries or cherry growers or apple growers, because we’re not in this alone. Everyone’s hurting.” 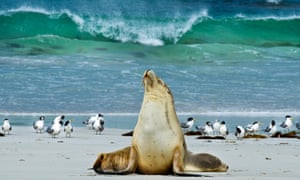 “There’s not one business or family who is not directly affected by the fires,” Kylie Bamfield says. And yet, when I meet the executive officer of the Kangaroo Island Tourism, Food, Wine and Beverage Association by the ferry terminal in Penneshaw, it looks much as it always has. It takes about an hour of driving to see evidence of the fires. Then it’s everywhere.

Defence Force trucks drive past melted road signs. Trees on either side of the highway are reduced to charred stumps; 96% of Flinders Chase national park and the adjacent Ravin des Casoars wilderness protection area have been burnt and the smell of ash still lingers over the landscape. The park won’t be open to independent visitors until the end of the year, though the Department for Environment and Water’s manager of tourism and visitor services, Chris Thomas, is hopeful it will be open to commercial tour operators within a month.

More than 200,000 hectares burned, but locals are keen to stress that it represents less than half of the island. The remaining area would still be Australia’s third-largest island, and Thomas says that “some of the best visitor experiences are completely unaffected”.

But despite suffering no fire damage, visitation at Seal Bay is down 70% on the same time last year. Other attractions are struggling even more. Kangaroo Island Outdoor Action runs a range of activities, including sandboarding, kayaking and quad-bike tours, and owner Brenton Davis has seen business between Christmas and the end of January reduce by 90% compared with last year.

Because he relies so heavily on the holiday period (visitation to the island in December 2018 was 29,000, compared with 9,000 in June), even a significant bounce won’t make up for the lost business. “You can’t fix a missing January with an awesome February so I’m now in a loss position for the whole year.” Ironically, Davis says, it’s an excellent time to visit. Ferry fares have been slashed, accommodation is easy to find and he’s now running quad-bike tours through fire-affected areas.

“Because it’s much more open, you can see much further and notice the contours of the land. We’re seeing plants we’ve never seen before and we’re actually seeing more animals than we’ve ever seen because there’s less cover. We just need people to come and visit.”