We stumbled across Dulle Griet in Ghent last year. It is a fantastic traditional Flemish pub, serving over 500 beers from across the country. The decor was great and staff very friendly. The highlight of the bar is the MAX, a strong beer served in a huge two-litre glass. In an effort to stop people stealing or breaking their glasses, you must give a deposit of one shoe when ordering the MAX, a ceremonial bell is rung and the shoe is suspended in a basket above the bar until the glass is returned. They are limited to one per customer – definitely a wise choice!
Mike L 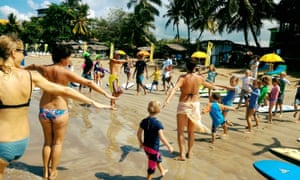 The Shack’s unprepossessing entrance on the busy coast road between the fort and the entrance to the Southern Expressway, tucked in between local stores, belies its true location: walk through and it opens out onto the stunning Bonavista Bay with views over to the fort, the old lighthouse and the Unawatunapeninsula. A sandy beach and an extensive deck is popular with Galle’s British expat population, with cold beers, cocktails, a cool bites menu and wood-fired pizzas on offer. Add in plenty of local knowledge, surfing, tours, and a kid- and dog-friendly vibe, it’s a great place to discover the local scene.
Chris Devonshire-Ellis 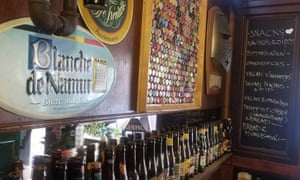 De Zotte is a true locals’ bar that captures all the vibrancy and character of Amsterdam, but is not distorted by catering to stereotypes for tourists. It’s close enough to Leidseplein for late-night partying, but hidden enough to avoid the stag dos and pub crawls, and sells an astonishing array of Belgian and Dutch beers (and jenever gin) at an affordable, mid-range price. I found this place by asking a local to put a pin on my tourist map of the best pub in town. He showed me my favourite pub in Europe – an absolute gem.
Huw Swanborough 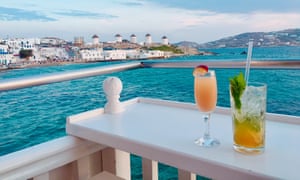 Katerina’s is perfectly located in Mykonos Town, in the area known as Little Venice. The area gets crowded, especially at night, but before sunset is the best time to be at the bar. We had a balcony seat overlooking the sea and the windmills. The cocktails are a bit pricy, but worth it, and if you don’t drink alcohol, like me, you can just order a mocktail. It was such a beautiful sunset.
Ruby 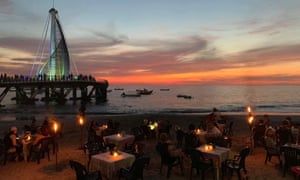 Casual, rustic, open-sided beach bar next to the main pier in the Pacific-coast city of Puerto Vallarta. Great view of the lit-up pier and beach. Live bands that play a wide variety of Spanish and Portuguese music with a tropical flavour; wonderful selection of mixed drinks, as well as beer and wine. The rich coffee is always freshly made, and your cup will be topped up constantly. The guacamole, salsa and light snacks are excellent. The service is attentive, and the waiters are fun. You can sit inside or at a candlelit table on the shore. Watch the fishing boats bobbing on the water, sink your toes into the sand, gaze at the palm trees swaying in the breeze …
Janice 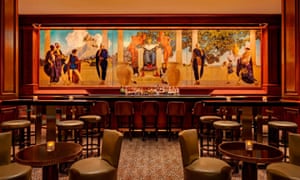 The birthplace of the gin version of the bloody mary (first called the red snapper) appears often in films: the small bar, enveloped in dark wood, is graced by a huge Maxfield Parrish mural, Old King Cole, which has a dreamlike beauty and is a must-see on an NYC trip. It’s not cheap, but neither is it exclusive or pretentious. The staff are welcoming, even when I showed up rain-drenched and in shorts. It’s an indescribably beautiful refuge just off Fifth Avenue, where you will see regular NYers, plus occasional famous people (Brad Pitt among others). Hint: the beer is not expensive by NY standards, after that mandatory bloody.
Worth 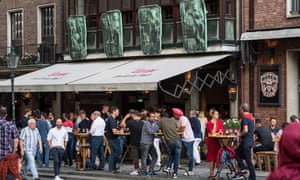 This is an amazing brewhouse in the Altstadt (old town), broken into smaller rooms, each with its own regulars – dark wood-panelled rooms through to larger enclosed spaces. Beer is filled fresh direct from the cask then carried to your table. When your glass is nearly empty, the bartender will replace it automatically, which makes it difficult to “drink up” and leave. Sadly, it took an hour to explain we did not want any more!
Keir

It’s a wonderful thing these days to drop into a bar and give it a try, not because review sites and social media instruct you to go there, but because it simply looks inviting. There is just such a bar on Carrer de Martínez de la Rosa in Barcelona. I can’t tell you its name because I’ve forgotten; it doesn’t have a website or any social media, and it isn’t on Google Maps. You’ll have to explore the street and look for a tiny bar with a cosy red hue where the staff all wear crisp white shirts, waistcoats and ties, and where they craft the most elegant cocktails. If you find it, I guarantee you won’t be disappointed. Like we did, you just have to take a chance.
Robert Cullen 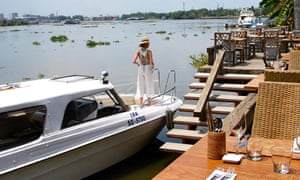 The most outstanding bar I’ve been to in Vietnam, possibly in Asia, is right on the Saigon river. Lychee martini, fish jumping, sun setting, whistle whetting. It doesn’t get more Somerset Maugham than this.
Jogn 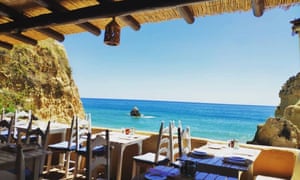 Walk across a gently rising grassy field that blocks a view of the sea. A small building that has a metal door. An elevator in the most unlikely of places. Down perhaps two or three floors. A musty-smelling tunnel with a bend. Intoxicating, garlicky aromas wafting along the tunnel. Suddenly, blinding sunlight. We have emerged halfway down the cliff. Salty sea mixed with proper cooking smells. Cava in an ice bucket. We are perched above sand and sea and waves and then out to open water. All squeezed between brown sandstone cliffs. This place is just not possible.
John Read