Home » Holiday » Lidos: Liquid gold for the joy, health and wellbeing of British people… Dive in! 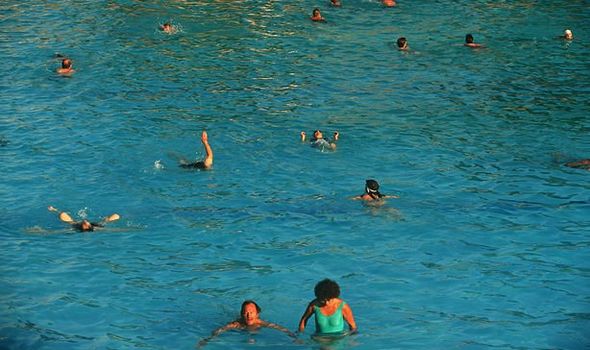 John Wibberley’s Art Deco masterpiece is a lido that the city of Plymouth can be truly proud of. The enormous curved pool projects into the English Channel below the famous Hoe where Francis Drake liked a game of bowls.

Completed in 1935, this huge lido has an eight-sided theme – octagonal fountains at either corner and one in the middle bring the whole piece to life.

Tinside is also Grade II-listed, making it one of the most important pieces of modern architecture in the country from that period.

One of the early London lidos, Tooting was so ahead of the curve that the word was not in common use when it opened in 1906. It was known simply as Tooting Bathing Lake.

It was built by the unemployed – an early example of municipal socialism.

In her book, Liquid Assets, Janet Smith tells how lifeguard Alfred French — in full suit, shirt, tie and cap — used his rowing boat moored in a corner to save two swimmers in 1907.

Now gentrified beyond belief, it includes a spa, poolside bar and a high-end restaurant serving food “in the spirit of hedonism rather than health”.

Currently only open to members or non-members booking a package.

Get the latest three-day weather forecast where you live. Find out by adding your postcode or visit InYourArea

In 1995, Lucy Blakstad made Brockwell Lido the star of her film for the BBC’s Modern Times strand, telling of the lido renaissance and the importance of this 1937 pool to the community – even showing a marriage held there.

Libby Page’s smash-hit novel The Lido is set there too.

The deck gets packed with people, the cafe is buzzing, and Casey McGlue and Paddy Castledine, the ex-council workers who took it over, are local heroes.

On a drab Derbyshire winter weekday with the rain lashing down, who would swim on such a morning? And yet… could there be anything more heartening (apart from a hot Cornish pasty from the nearby bakery) than a dip in this charming little pool?

The water’s heated but you won’t want to linger on the lawn in that chill. But who cares? Each abridged length gives a chance to ogle its architecture: the covered seating area, the bandstand, the chunky stone on many buildings round these parts.

Gifted in 1936 by razor blade manufacturer George Herbert Lawrence, it has long been a treasured part of life in this Peak District village.

Newspaper clippings from its opening in 1938 proudly announce this watery wonder as available to working people for just a few pence, with no membership requirements.

Set at the foot of Parliament Hill, just before it rises into Hampstead Heath, this is the Luciano Pavarotti of lidos – big, but not perhaps big enough for its fans.

Queueing barriers go up in front in summer, so it feels a bit like you’re waiting for a ride at a theme park.

The interiors are showing their age but there is so much space and light outside, heightened by the unusual metallic lining of the unheated pool.

The modernism of England’s south coast is seldom noted, yet it gave several Edwardian resorts a shot in the arm – for example, Deal Pier and Bexhill’s De La Warr Pavilion.

It also gave us possibly England’s best-looking lido, at Saltdean.

The main building forms a pair of arms, embracing the pool, and the symmetrical purity speaks of the age of health, efficiency and the new.

Saltdean’s story is also one of a committed community which saved this gem from the wrecking ball, restoring it to its present glory.

Opened in 1932, London Fields has a reputation for being Britain’s most hipster lido.

On weekdays, the afternoons swarm with creatives and tech freelancers on their phones, and on warm weekends it’s hot ‘n’ hectic with locals and Hackney house-sharers in their 20s.

But the heated pool is perfect year-round. In winter, hardened triathletes take over, plus older swimmers who prove a daily dip is the best way to live longer.

With its cute coloured changing room doors, this lido is a pocket of calm.

You can see the wonder in the eyes of first-timers here – more so if they are Londoners who never believed such a pool could exist in Holborn’s hubbub.

An outdoor sauna is perfect for colder days and there’s plenty of concrete to lounge on in a heatwave. Only the taxi horns remind you it’s London.

The Oasis is a testament to the 1960s, a glorious age of British building, and includes a luxurious central pool and the social housing blocks for OAPs that curl around the site.