Captain Faruk, steering from the dark of his cabin, says he prefers the Bosphorus at night, that he likes to navigate by the twinkling of the lights on shore. A captain for 23 years, and on Istanbul’s ferries for the last four, he admits he was unusually excited for the start of this shift.

For up until now, it has been a particularly Istanbul feeling to realise – with a sense of dread– that it’s past midnight and you are stuck not just on the wrong side of the city but on the wrong continent. After the last 1am ferries across the Bosphorus, late nights often end in a long, crowded bus ride over the bridge or an expensive taxi through the Eurasia tunnel.

From the weekend of 29 February, however, Istanbul’s boats ran all night for the first time. After the city’s new mayor, Ekrem İmamoğlu, introduced 24-hour services on select metro lines last year, now the vapurs operate all Friday and Saturday, between Kadıköy and Üsküdar piers on the Asian side and Karaköy and Beşiktaş piers on the European side. One ferry runs on a loop through the night between three of the busiest piers – the Kadıköy-Karaköy-Beşiktaş line – and there is a shuttle between Beşiktaş and Üsküdar. 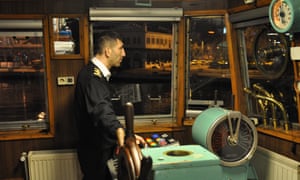 It marks a new phase in the 166-year history of the city’s vapurs – often the setting, in old Ottoman novels, of public debates and chance, romantic encounters. And though that charm remains, what is striking is how routine Istanbul’s ferry rides have become, how woven they are into fabric of the city: every day, more than 600,000 Istanbulites use them to cross the straits.

On Saturday night, more than 500 were to board the Şehit Mustafa Aydoğdu, a double-decker boat that’s been running up and down the Bosphorus for nearly 40 years. Among them were young couples, rowdy birthday party crowds, and that most Istanbul of sights: men with the bloodied scalp of a recent hair transplant.

Around 2am, leaving from the trendy Beşiktaş district, one passenger drunkenly shouts to me: “We are so happy we can go home! It’s safe, it’s cheap. We love our mayor!” 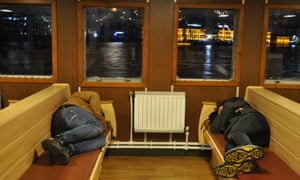 Another, travelling in the opposite direction, compares the vapur’s facilities to those of the buses and shared-taxis he would have to take otherwise: “At least on here you can take a pee if you need to!”

Yet, if it’s all logistics downstairs, one man is keeping the flame alive. “The sea is its own world,” Captain Faruk tells me, an illicit cigarette hanging from his mouth, Turkish power ballads playing over the engine hum. In the preceding days, Istanbul had seen routes cancelled as the south-westerly lodos winds made the straits too dangerous to cross. Yet by the weekend, all had calmed, the only waves created by the occasional large commercial vessel heading south, down to the Mediterranean. 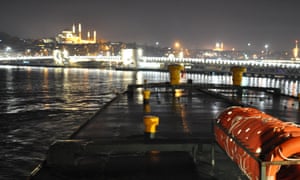 From the still of his cabin, Faruk continues, “And at night, it’s different again: quiet, romantic, joyful.” The shadows of Topkapı Palace in front of us, the uplit spires of Sülemaniye mosque in the distance, he uses a particularly Turkish word, keyifli – the joy of deliberate, peaceful moments. For a while, we drink Turkish coffee and say nothing.

By now, on the last leg, only a few passengers remain on the decks. The atmosphere has changed, too, with passengers sprawled out asleep as we pass Haydarpaşa, the grand old Ottoman railway station, and onto Kadıköy pier. Reaching the Asian side just before 6am, the light is just beginning to turn – the Istanbul night, as the writer Sabahattin Ali put it, is slowly hauling off its black coat.

The last trickle of idlers step off the new 24-hour vapur service and into the February morning. Most will head straight home but perhaps a few will stop for a quick breakfast first. There is an old flour mill district just five minutes’ walk away – in this city, the bakeries never stop either.

Looking for a holiday with a difference? Browse Guardian Holidays to see a range of fantastic trips