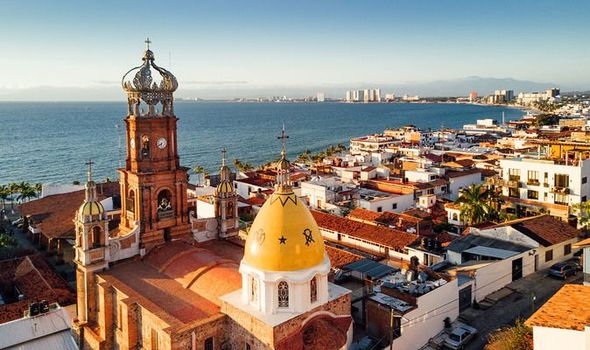 Julio had told me so. Not in so many words, but in the fact he didn’t feel the need to give me a sharp knife while he muttered, “te cortaras los dedos” which I took to mean, “wow, this guy’s good”. We were on the top floor balcony of the famous Gaby’s in Puerto Vallarta looking over the Pacific on the west coast of Mexico. And it was H-O-T.

Year-round sun is part of the appeal. Great food, tequila, friendly locals, tequila, good hotels, tequila and lively LGBT-friendly nightlife are some of the others.

Oh and the raicilla, but more of that later. In fact “more raicilla later” became a common theme, but there are many more reasons why you should hot foot it down Mexico way, now it’s off the Government travel red list at long last?

Base it on a love affair

It would be pretty lazy of me to talk about Puerto Vallarta in terms of Richard Burton and Elizabeth Taylor. So here goes.

While filming the 1964 classic Night of the Iguana in the sleepy fishing village, Welsh thesp Burton fell in love with the place.

So much so he bought Liz a beautiful villa called Casa Kimberly directly across the street from his own casita.

He built a pink bridge connecting the two properties, ironically dubbed the “bridge of love”, that would serve as a passage to keep their love affair secret.

Burton brought much more than just glamour to Puerto Vallarta. He was a fundraiser, a patron and a catalyst for what came later ‑ even if some locals remember him just as an angry drunk.

Legend has it that when Taylor and Burton fell out ‑ which was frequently ‑ they demolished the bridge. It may be a myth, but it’s a good one.

Head into the jungle

When we jumped into the back of a brightly painted former army van, our guide Diego was excited to show us “hidden Mexico”.

In a family-owned botanical garden he proudly told how there was everything a man needs in his life ‑ including a “money tree”. Well, the tree that gives dollar bills their distinctive green pigment anyway. In fact, legally, you’re not allowed to grow one in Brazil.

Need a little pep? The jackfruit has been known as nature’s Viagra. Then there’s the blue agave ‑ which is where you get the tequila.

Diego’s tour was hit and miss, with a few tourist-trap gift shops and underwhelming town squares, intertwined with petroglyphs from bygone cultures and a fantastic lunch served in a stream as the water washed against your feet.

But his passion for his country shone through.

A few days later in Jardin Botanico we saw vanilla plantations, off-grid hiking trails, hummingbirds and a large collection of beautiful orchids. And even a chewing gum tree.

Cut a little bark off the chicozapote tree, pop it in your mouth and chew away to get the same consistency as Wrigley’s ‑ albeit without the spearmint.

It was one of the most gob-smacking things I’ve seen. And I’ve been to Rhyl.

So back to those all-important limes. Food is everything in these parts and the simpler the better.

We’d eaten in some top-class restaurants, an interesting taster menu at downtown Tintoque and the memorable La Leche, a restaurant with a DJ in the corner and EVERYTHING white.

But for me nothing summed up the culinary experience like doing it yourself. And for £46 Julio will let you do just that.

We’d bought the ingredients at the local market ‑ passing Burton and Taylor’s still intact love bridge ‑ before we were let loose in the kitchen.

The chillis were finely cut, avocados smashed and limes squeezed expertly for a fish ceviche.

Mexican food can be heavy in the UK. However in Puerto Vallarta ‑ and Gaby’s in particular ‑ it’s light and fresh, with salsa ranchera and azteca guacamole with roasted tomato sauce, chicken arracheras with self-rolled tortillas and the sweet-yet-savoury mole poblano.

That’s not an easy thing to make as you mix chilli with cloves and cinnamon sticks to create a dark chocolatey sauce to pour over chicken. But we cooked, we ate and we got into the swing of things.

It was going so well until he brought out the homemade raicilla. That was a common theme?

A little bit of luxury in your life

Mexico isn’t all about sipping tequila in a shanty with a lonely mariachi. Sometimes you need to drink tequila on a superyacht too.

This part of Mexico is flooded with American tourists who want the best and we joined them during this pre-pandemic break on a luxury boat trip around Banderas Bay, stopping to snorkel with stingrays and tropical fish.

But it can’t all be margaritas on the yacht. Sometimes you need them in too.

Luckily the panoramic views from the five-star Grand Miramar All Luxury Suites and Residences high up in the Conchas Chinas hills made holding a drink in the rooftop infinity pool an absolute delight.

Our suite was beautifully furnished, with a spacious living area and Pacific Ocean views from the private terrace.

Its vegan chef excelled in rustling up a healthy breakfast of enchiladas with mashed potato, black bean and fried corn right in front of us. It’s what I needed at that point. And that’s what Puerto Vallarta is great at ‑ curing what ails you.

There are around 330 days of sun every year and that certainly improves the mood. The delicious food warms the soul and the people engage the mind. For everything else, there’s always the raicilla.

GET THERE: Aeromexico flies from Heathrow to Puerto Vallarta from £1,114 return. aeromexico.com

BOOK IT: Rooms at the Grand Miramar All Luxury Suites and Residences in Puerto Vallarta start at around £100 per night for a Grand Junior Suite (sleeps four). grandmiramar.com