It is close to peak season at Port Everglades, Florida’s second-busiest cruise port, yet an air of deep anxiety hangs over the deserted quaysides and departure terminals. With all major cruise lines shuttering operations, countries closing ports to large passenger ships and thousands of workers laid off indefinitely, the $45bn (£35.6bn) US cruise industry is struggling to plot a course through the rough waters of the coronavirus crisis.

In Fort Lauderdale, authorities warned that up to 50,000 passengers might have been in contact with port workers infected with the virus, adding to a public relations nightmare that just days earlier saw one liner with 3,500 aboard refused permission to dock in California and two Florida-based ships ordered to stay at sea temporarily while crew members were tested.

One by one, the big cruise operators announced they were halting operations and mothballing ships, beginning with Princess Cruises, one of Port Everglades’ biggest clients with 18 vessels, Viking Cruises and Disney Cruise Lines on Thursday. Others had fallen into line by Saturday morning. Normally bustling ports including Miami, Port Canaveral, Galveston, New York, Seattle and New Orleans went silent for the first time since the days following 9/11.

The value of the three biggest US cruise lines, Carnival, Royal Caribbean and Norwegian, has continued to tumble on Wall Street to the point of “flat-out ridiculous”, according to market analyst Rick Munarriz of the Motley Fool.

On Thursday shares of Miami-based Carnival Cruise Lines, owners of Princess, plummeted more than 31%, two days after Royal Caribbean withdrew its own market predictions and rearranged finances to increase liquidity by half a billion dollars. Reports of layoffs of port workers, cruise line contractors and crew, and hotel workers came in thick and fast. 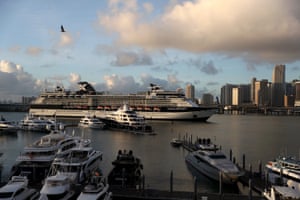 It all adds up to the biggest challenge facing the cruise companies since 9/11, experts assert, threatening the survival of smaller players. Until the coronavirus outbreak, growth in the North American cruise industry was steady, with more than 14.2 million passengers expected to travel in 2020 and 19 new cruise ships making their maiden voyages, according to the Cruise Lines International Association.

“This will be a disastrous time for the industry,” said Dr Christopher Muller, a senior professor at Boston University’s school of hospitality administration. “When you have 3,500 people booked on one of these mega cruises and the boat doesn’t go, it’s an enormous expense.

“Someone’s paying for that boat that’s sitting idle in the harbor and it’s very hard to recapture those ongoing fixed-cost losses. Airlines have much smaller capacity vehicles, so while grounding a 150- or even 400-seat airplane is expensive, they can react much quicker.”

Even before this week’s shutdown, anecdotal evidence suggested many customers were rethinking plans or canceling altogether. In response to the US government’s advice for travelers to avoid cruise ships, almost every company eased cancellation policies, seeking to lock in prevaricating customers to post-resumption dates rather than risk losing their business altogether.

Highlighting the dark side of high-pressure cruise trip sales, the Miami New Times reported that agents at Norwegian were instructed to mislead potential customers with false information about coronavirus to secure a sale.

Muller believes the industry will rebound strongly once the crisis passes.

“The logical thing is they will have to have very deep discounts, and those deep discounts will be especially present in the next cycle of cruise seasonality in September,” he said.

“By August and September the consuming public will be enticed to go back on cruises because the pricing is going to be outrageously good with enormous discounts.”

But he warns that images of passengers being stuck at sea on coronavirus-infected ships and confined to tiny cabins will take time to fade.

“The problem is the concept of cruising is that they sell luxury and safety at sea while the recent bad publicity has highlighted the fact that the rooms themselves are very small and that most of that luxury is out and about in crowded, captive places.

“They’ll highlight the things you can do that you can’t do anywhere else, the luxury of this floating hotel going from place to place. But look at that ship off Oakland. If you’re stuck in your cabin, it’s a zombie prison, and that’s the perception [of cruising] right now.”

Vicky Garcia, chief operating officer and co-owner of the Florida-based company Cruise Planners, said the economic effects of the crisis would be felt far beyond the cruise lines and workers.

“It has a trickle-down effect to everybody around us, even furniture companies that sell to cruise ships or whatever, everyone’s going to cut back and do different things,” she said.

“It’s hurting employment and lay-offs significantly. It’ll probably get uglier before it gets better but it’s not going to be here forever. Don’t rush to cancel, wait this out, keep that great cabin, unless you specifically want to book something else.”

When things finally return to normal, Garcia said, cruise lines will be offering attractive deals to entice customers back.

“I always say there’s a price for fear. Right now they may say, ‘I don’t want to go, I’m a little fearful of this Covid-19’, but once the rates start dropping the same people that said no are like, ‘Oh, for that price, yes I’ll book it.’

“As a true comparison, when 9/11 happened, everything stopped, the world stopped moving almost. I worked at a cruise line call center and the phone stopped ringing. As soon as the rates were lowered those same people were calling back. It will turn around. That’s the great thing about the cruise industry, it’s flexible.”