His ship was scheduled to arrive in Puerto Chacabuco, Chile,
the next day at 8 a.m. The vessel and its 684 passengers had left Buenos Aires
on March 2 on a 21-day cruise. It had sailed to ports in Uruguay and Argentina,
and its passengers had spent March 11 in Punta Arenas, Chile.

What nobody onboard knew was that Punta Arenas would be the
last place anyone would get off the ship until March 30, the day after the
Pursuit arrived in Miami after 18 straight days at sea and more than 8,000
nautical miles. As the Covid-19 pandemic started causing global panic, the ship
became one of many that would be denied disembarkation at ports around the
world.

At 10 p.m. that Friday the 13th, port authorities in
Chacabuco asked the ship if anyone onboard had coronavirus or a fever. One crew
member had a fever (not caused by coronavirus) and was in isolation and not
working, as per Azamara policy. The port then requested the ship take the
temperature of the 1,100 guests and crew members onboard; by 11 p.m., it was
done, and there were no fevers.

It was not enough. Chacabuco would not let anyone disembark
on March 14.

“It was at that point the cruise started to go very wrong,”
Smith said.

The Pursuit was told that Chile was closing all ports to
cruise ships. The vessel’s final destination, Peru, was also off the table; the
country closed its borders that same day.

The ship cruised around Patagonian glaciers and fjords
before heading to Valparaiso, Chile, where the plan was to disembark all
passengers and fly them home from Santiago. Azamara arranged all their flights
and started thinking about where to take the ship once it was empty of
passengers.

But once in Valparaiso, authorities held the ship outside
the port for a day and a half.

“At this stage, we were running low on fuel and running out
of fresh produce,” Smith said. “We had to be a little experimental with our
menus. There were no red and green items except for ketchup. No tomatoes,
cucumbers, lettuce. The food was still good, just not what we normally serve.” 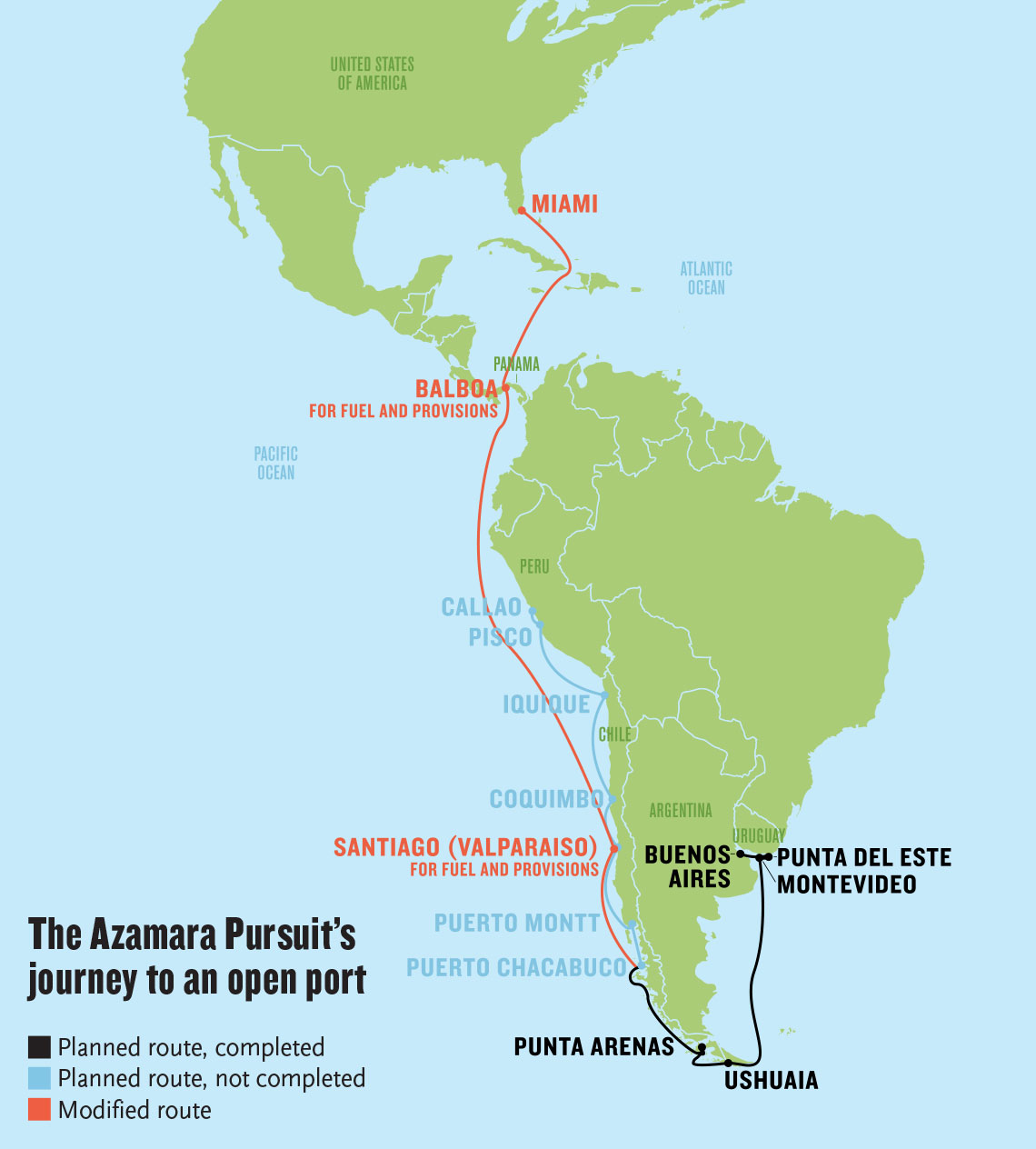 Chile would not let any non-Chilean passengers off the ship,
although nobody onboard was sick — the one crew member had recovered — and
nobody had left the ship for eight days.

The Pursuit was given permission to anchor and take on fuel
and provisions, which had to be done by loading 150 pallets of food from
barges. What could have been done pierside in four hours, Smith said, took 36.

Azamara realized then that the ship would have to sail all the
way to Miami and get guests home via charter flights.

“There was nothing left open,” Smith said. “We looked at so
many different options — Ecuador, Mexico, Panama, Colombia — and
the doors were being closed in our faces left, right and center.”

Before leaving, the ship needed medication for guests who
had planned to disembark three days later in Peru and did not have enough of
their prescription drugs to last another week. Smith said Chilean authorities
were not very helpful and that Royal Caribbean Cruises Ltd., Azamara’s parent
company, had to ask the U.S. and other embassies for help. The meds finally
arrived, and “we sailed for the Panama Canal,” Smith said.

Transiting the canal was not a sure thing, for a few
reasons. Due to drought conditions, Panama in January had reduced the number of
ships able to pass, and the Pursuit was not scheduled to make the transit.

“And they were getting nervous about coronavirus, as well,”
Smith said. “We didn’t have it, but at that state, passenger cruise vessels
were making world news.”

Ultimately, Smith said, the ship was given permission to
traverse the canal, “during daylight, so the guests really enjoyed it.”

While officers and Azamara headquarters in Miami handled the
logistics around the ship’s route and made endless changes to passenger
flights, the Pursuit’s cruise director had to figure out how to keep guests
entertained during the unplanned 18 days at sea.

Smith praised the crew, some of whom have worked onboard for
the 13 years that he’s helmed the ship, for being resourceful and creative.

“We were keeping guests fed and watered, which everyone
enjoys; the problem was entertainment,” he said, given that onboard
entertainers and ship staff had already performed their shows.

But they were “brilliant,” Smith said. The cruise director “cobbled
together” shows he hadn’t performed in 20 years, while guest performers “made
up stuff.”

For Smith’s stargazing class that usually draws between 30
and 60 people, “there must have been 400 passengers with me,” he said. When the
ship made its unplanned equator crossing, it held a ceremony and Smith signed
700 certificates. Twitter posts show passengers playing trivia games, taking
painting classes and packing the top deck for a dance party.

Behind the scenes, the crew was keeping the ship healthy.

“We started taking extra precautions early on, before they
were mandated,” Smith said.

With nobody getting on or off the Pursuit, he realized the
one way the virus could come aboard would be with the local pilots who navigate
ships into ports. The crew had those pilots wear masks, bleached the soles of
their shoes and sanitized everything they touched. For the 16-hour Panama Canal
transit, the bridge team wore masks and gloves for the full passage, and when
the pilot left, the bridge was sanitized.

“There is a good reason our vessel remained healthy, and it’s
because of the actions of our crew,” Smith said.

There were some scares along the way, including three
passengers with medical emergencies. Two were able to disembark. A heart attack
victim was taken off by helicopter in Chile, and a patient with a hernia was
put on a U.S. Coast Guard cutter near Key West, just before the Pursuit arrived
in Miami. But Panama would not let a passenger with a medical emergency in the
canal disembark. Luckily, that guest recovered on the ship.

The Pursuit arrived in Miami on March 29, and guests
disembarked over the following two days, almost a month after the ship departed
from Buenos Aires.

Unlike the ships that were stuck at sea with coronavirus
outbreaks, the Pursuit’s saga has stayed under the radar.

“Any other month of any other year, it would have been more
than newsworthy,” Smith said of its journey.

For him and the rest of the crew, it’s not over. Most are
still onboard as the ship sits idly off of Florida, unable to return home due
to travel restrictions. Those that remain must maintain social distance, with each crew
member in his or her own cabin and eating one per table.

“They are getting more sleep than they normally do,” Smith
said of the crew, but life onboard without guests “is a little sad.”